The year was 1968 and America seemed be buckling under pressure. The nation was gripped by nightly broadcasts from the front-lines of the Vietnam War. The gruesome televised dispatches fueled the Anti- War movement with protests and riots tearing the nation apart. The country was faced with electing a new president while in the throes of what seemed like a national nervous breakdown.

President Johnson announced on national television that he would not seek re-election but pledged to end the Vietnam War before leaving office.

By fall the Republican nominee Richard Nixon was locked in a tight race against Democratic candidate, Hubert Humphrey. Nixon ran on the promise to end the Vietnam War and he knew that any formal announcement of peace in Vietnam before the general election would effectively destroy his long delayed dream of winning the presidency.

In fear of what seemed inevitable, Nixon devised a plan to sabotage Johnson’s peace initiative between North and South Vietnam. With his Chief of Staff, H.R. Haldeman; they enlisted the help of a glamorous and mysterious Republican operative as a back channel to the South Vietnamese government. Her name was Anna Chennault. 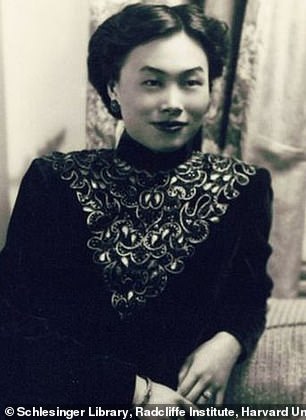 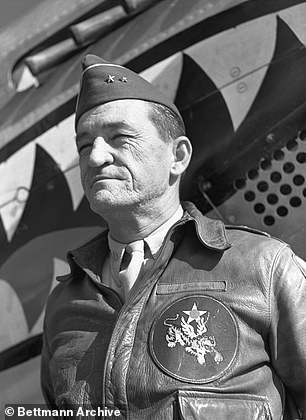 Lovers: Anna Chennault, born Chan Sheng Mai, was an ambitious young journalist (left), when she met WWII hero General Claire Lee Chennault, (right) and was instantly taken by him. He, a married father of eight, was a hero in the U.S. and China as the leader of the legendary ‘Flying Tigers’—a squadron of combat based aviators that defeated the Japanese in a number of fabled air battles during WWII 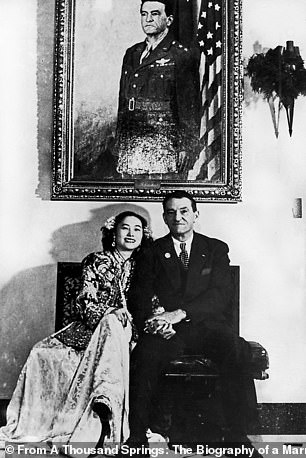 General Chennault poses beneath a portrait of himself on his wedding day to 22 year old Chan Sheng Mai in 1947.

By the time Chennault earned her moniker as ‘the steel butterfly’ among the Washington D.C. intelligentsia, she was far from the young impoverished girl that grew up in war-torn China.

Anna Chennault was born Chan Sheng Mai on June 23, 1925 in Beijing to an affluent family that lived in a mansion with servants and tutors outside The Forbidden City but her comfortable childhood came to an abrupt end at the outbreak of the Second Sino-Japanese War. Mai and her five sisters were forced seek refuge in ‘free China.’

Striving to change her fate and guarantee her future…she received a degree in journalism from Lingham University and became a war correspondent for China’s Central News Agency. This role led her to a chance encounter with an American War hero that would forever change the course of her life.

General Claire Lee Chennault was a married father of eight children when he first met the young, ambitious journalist in Kunming, China. Anna was instantly taken by his charismatic southern charm. He was both a hero in the United States and China as the leader of the legendary ‘Flying Tigers’—a squadron of combat based aviators that defeated the Japanese in a number of fabled air battles during WWII.

Despite the 35 year age gap, Chennault and Mai married in Shanghai in 1947 shortly after divorcing his wife. The new couple eventually settled down in the United States. Anna’s marriage to the wartime celebrity had suddenly made her the toast of the town within Washington D.C’s political elite.

Her husband’s connections and influence lasted well after his untimely death in 1958. Anna Chennault went on to build a distinguished and varied career in Washington as a consultant to American and Asian military leaders. She was also a successful business woman as Vice-President to ‘The Flying Tiger Cargo Line’ which eventually sold to FedEx. Chennault dabbled in writing, both poetry and non-fiction. She became a broadcaster for Voice of America and followed her late husband’s footsteps as a powerful figure in the ‘China Lobby.’ 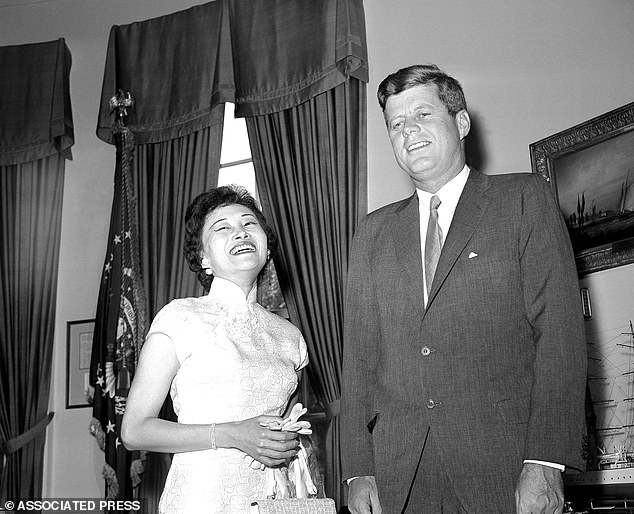 Chennault (left) was appointed Chairwoman of Chinese Refugee Relief by President Kennedy in 1962. Her impoverished childhood as a refugee in communist China informed her strong anti-communist agenda as a power player in Washington D.C. 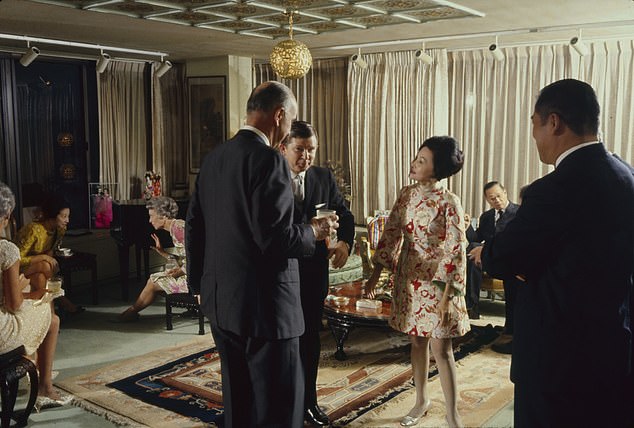 Hostess with the mostest: Chennault entertained as many as 100 guests a week from her penthouse apartment in The Watergate complex. A gossip columnist for the Washington Post at the time wrote that Chennault’s living room ‘resembles nothing so much as a set in a James Bond movie.’

Before the Unites States formally entered the Second World War, China was engaged in a merciless war against the Japanese who had invaded the country in 1937.  With only a few regional armies scattered throughout the country, the Chinese were left defenseless to their (structured) adversary.

Franklin D. Roosevelt executed a secret order that sent an ‘unofficial’ unit of airman to assist their ally. This unit, originally known as the ‘American Volunteer Group’ (later recognized as The Flying Tigers) was commanded by General Claire Lee Chennault. It was composed of 87 pilots, 300 groundsmen and 100 P-40 Warhawks from the Curtis- Wright Corporation. 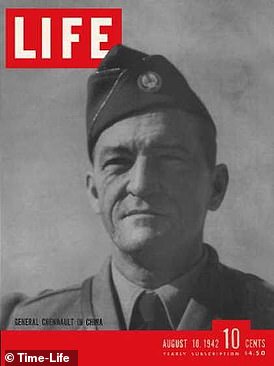 Hero: Chennault’s role as the commander of The Flying Tigers made him an international war hero.  He appeared on the cover of LIFE in 1942 after arriving back to America with  his new bride

They trained at a Royal Air Force facility in Burma before officially being sent into combat the day after Japan’s surprise attack on Pearl Harbor.

Over the next 7 months, The Flying Tigers protected the Chinese border in a series of successful tactical battles that shot down 296 confirmed enemy planes destroyed 573 bridges, 1300 boats and killed thousands of Imperial Japanese Army soldiers.

Their signature painted shark nosed planes became an iconic image in American military regalia, forever being a symbol of bravery and heroism.

But perhaps her most famous role was that of hostess. In custom slender fitting dresses, vertiginous heels and a well-coiffed beehive; Chennault held court from her glamorous penthouse apartment at the infamous Watergate Complex where she threw lavish parties attended by congressmen, dignitaries, journalists and diplomats.

At the time, Senator Russell Long of Louisiana was quoted in the Washington Post, ‘Watergate is where it’s happening, and the hot center of it all is Anna Chennault’s apartment.’

Maxine Cheshire, the notorious gossip columnist for the Post detailed the massive living room with spectacular, sprawling views of the Potomic River. ‘..filled with Oriental objets d’art, resembles nothing so much as a set in a James Bond movie.’

She was known to entertain as many as 100 bold face names in a single week and rubbed shoulders with the likes of Henry Kissinger, John F. Kennedy, J. Edgar Hoover, Gerald Ford, General William Westmoreland, and most importantly, Bui Diem—South Vietnam’s ambassador to the United States. It was this very connection that became key to Nixon’s strategy to derail Johnson’s peace effort for Vietnam.

Publicly, Nixon ran on a platform that opposed the conflict but in order to win the election he needed it to continue. Worried that democrats would politicize an end to the war in their favor, he conceived a plan to ‘monkey wrench’ Johnson’s peace discussions.

With shared political beliefs and a common cause, Chennault became Nixon’s surreptitious emissary to the South Vietnamese government. Using her personal contacts, she enticed our allies with the potential for a ‘better deal’ in peace negotiations with Nixon as president if they waited until after the election was over.

Subsequently, Chennault was recorded over an FBI wiretap relaying a message to Bui Diem: ‘Hold on, we are gonna win…Please tell your boss to hold on.’ Within hours, the South Vietnamese President, Nguyen Van Thieu announced that he will be withdrawing from the Paris Peace Accords.

Johnson was faced with a difficult to decision to blow the whistle on Chennault’s treachery but ultimately chose not to; in doing so he would have to admit that his administration surveilled a US foreign ally and a personal political adversary during an election.

Three days later, on November 5th Richard Nixon was elected to be the 37th President of The United States. The Vietnam War dragged on for more seven more years with devastating casualty tolls for both Americans and Vietnamese. 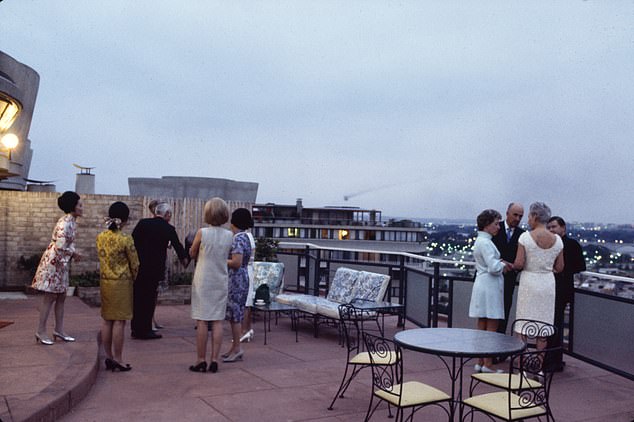 Not so quiet on the Potomic: Chennault apartment served as the unofficial clubhouse for Republican power players. Her famously influential guest list included notable names like Senator Strom Thurmond, C.I.A. Director Richard M. Helms, and Secretary of State, Henry Kissinger. She always served exotic cocktails and Chinese dishes made by her personal chef that had cheeky names like ‘Concubines delight.’ 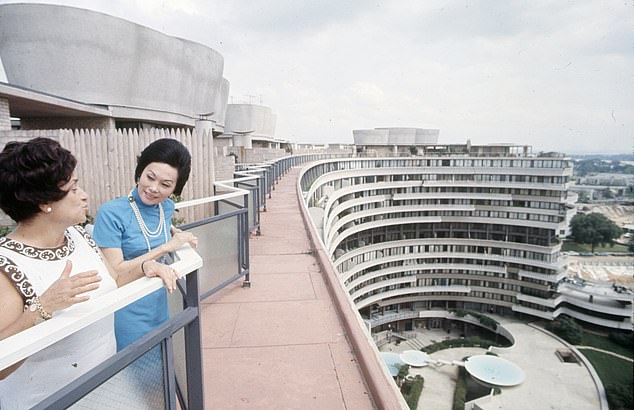 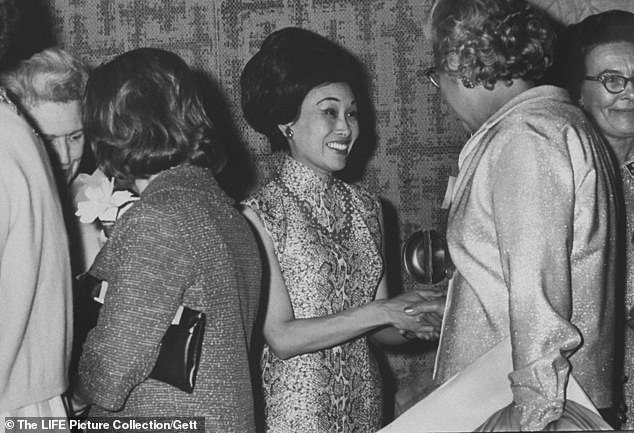 The toast of the town: Anna Chennault cut a stylish swath through Washington’s elite social circles in custom dresses that she designed herself, stiletto heels, a perfect coif and private chauffeur 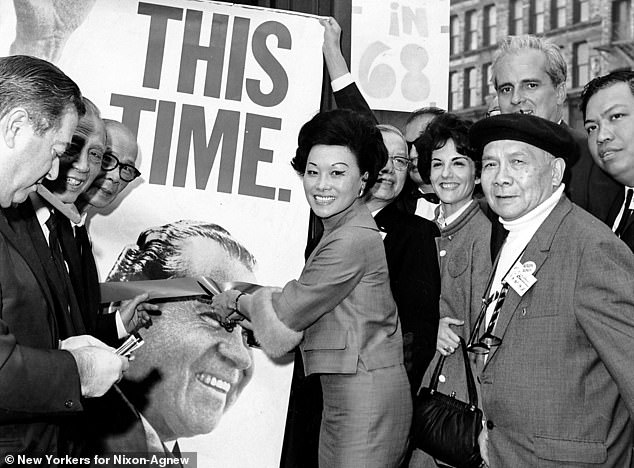 As a top fundraiser for the Republican party,  Chennault ceremoniously cut the ribbon to celebrate the opening of Nixon’s campaign office in New York City.

Nixon denied his treacherous involvement in what became known as ‘The Chennault Affair’ to his death. As for the elegant accomplice that he called his ‘dragon lady;’ Anna Chennault discreetly admitted to her part in the scheme in her 1980 autobiography, ‘The Education of Anna.’

While President Johnson learned about the operation through the covert maneuvers of his intelligence agencies, he was never able to formally connect Nixon to his role in the foreign meddling.

It wasn’t until 2007 when historian John Farrell came across conclusive evidence buried deep in the Nixon Presidential Library archives. It was four pages of notes taken by his loyal aide H.R. Haldeman, an entry on October 22nd 1968 read: ‘! Keep Anna Chennault working on SVN….Any other way to monkey wrench it?’ 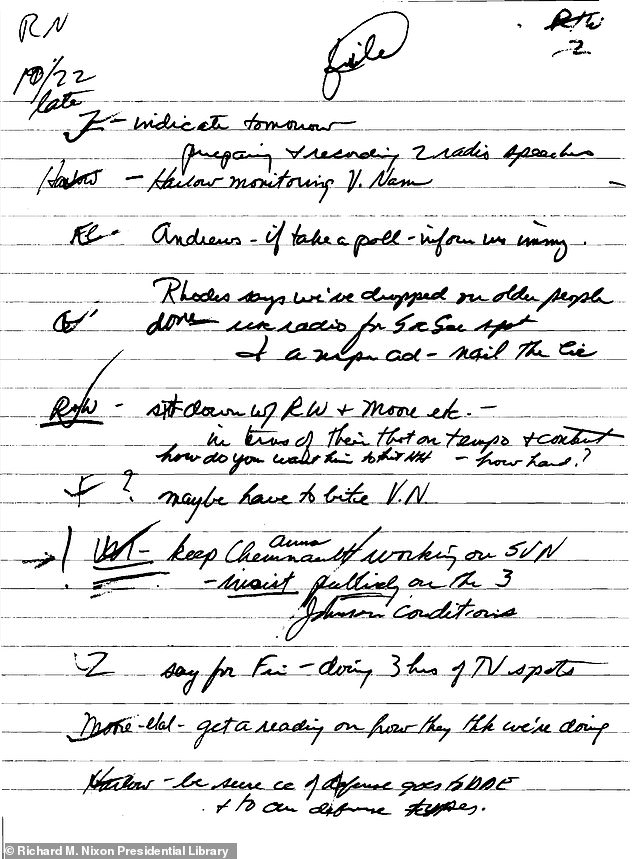 Smoking gun: Personal notes taken by Nixon’s Chief of Staff, H.R. Haldeman were  discovered by historian John Farrell in 2007. While Nixon long denied his involvement in a conspiracy to collude with a  foreign government, Haldeman’s notes conclusively tie Nixon to it 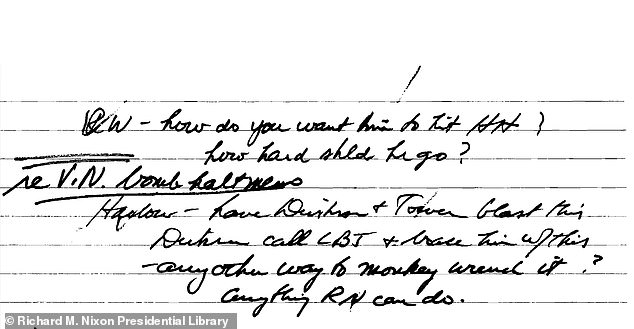 Marching Orders: An entry dated on October 22 1968 from H.R. Haldeman’s notes from his boss regarding a potential peace agreement in Vietnam, question “Any other way to monkey wrench it?”