These intriguing photographs have captured real-life crime scenes as taken by the Los Angeles Police Department (LAPD) in the early to mid twentieth century.

The collection of images showcase both the amusing times had by the police force since 1925, as well as the more disturbing instances that have had to be dealt with.

One chilling image shows two men slain over their spaghetti at an Italian restaurant in an alleged mafia hit, while another captures a murder victim who had his throat slashed in his car in 1929.

Meanwhile, a 1955 photo shows Hollywood actress Maila Nurmi comically posing in a jail cell – after surviving a murder attempt when a man broke into her apartment.

Another humorous photo from the police force’s archives, estimated to hold one million photographs, shows an LAPD officer administrating a field sobriety test to a woman in 1958.

The fascinating series also includes a later photograph from 1970 – which shows a member of the Manson Family arriving for their arraignment. As members of Charles Manson’s cult, several of the so-called Family committed murders at his request.

An amusing 1952 photo shows a young woman daringly hoisting up her skirt and smoking her cigarette as the cops snap a photograph of her. The remarkable images from the Fototeka Collection of Los Angeles Crime Scene Photography are on display at an LA gallery for the next month. All the photos in the collection were taken by the Los Angeles Police Department (LAPD) between 1925 and the 1970s 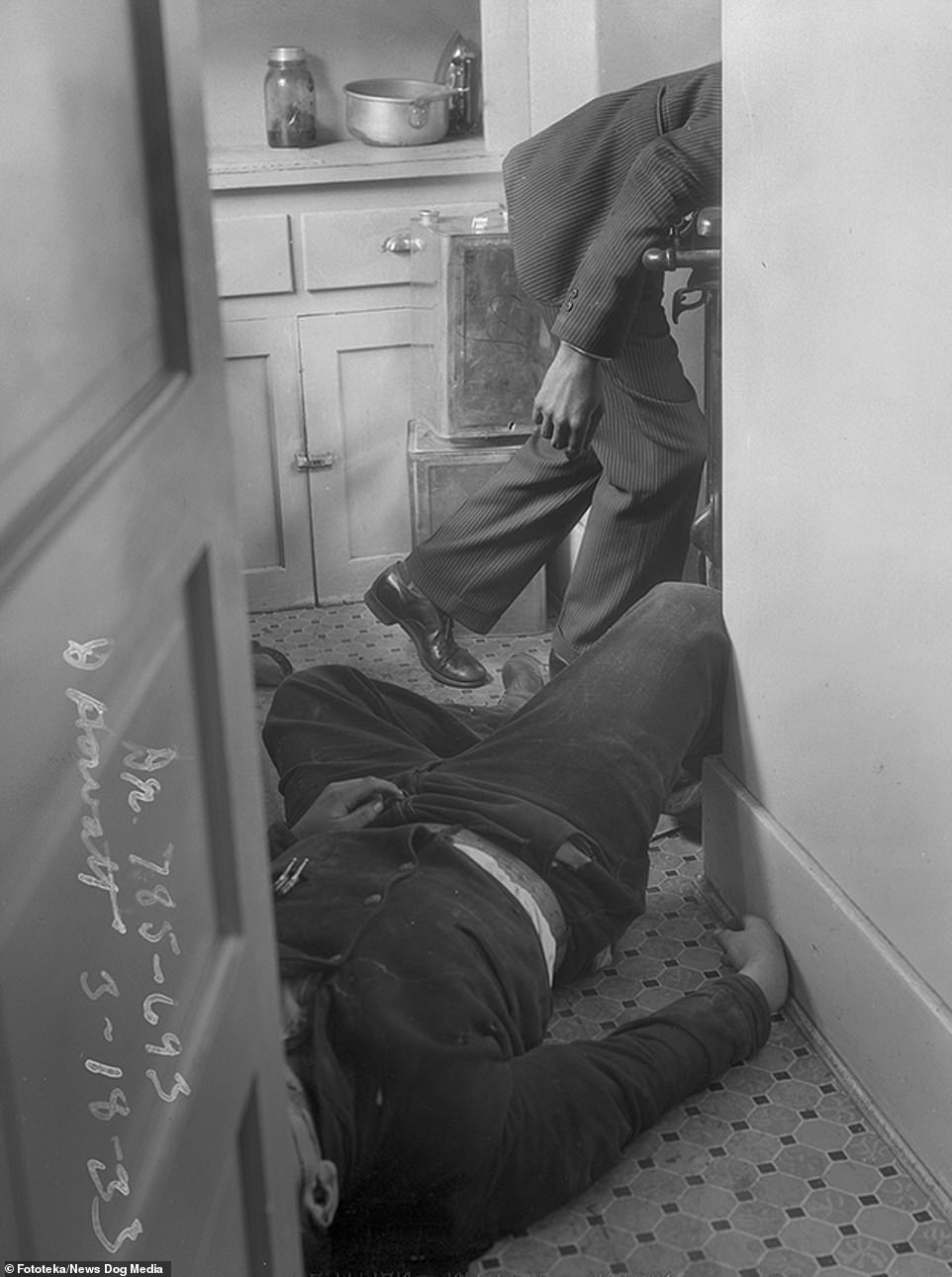 Two men lie strewn across a Los Angeles kitchen after being murdered in a prohibition era dispute. Many of the striking images in the striking exhibition would appear to be straight out of a classic Hollywood film noir to modern-day viewers. There are an estimated one million photographs within the LAPD archives. Many of these images come from Special Investigations Division – America’s oldest crime lab, which was established in the 1920s 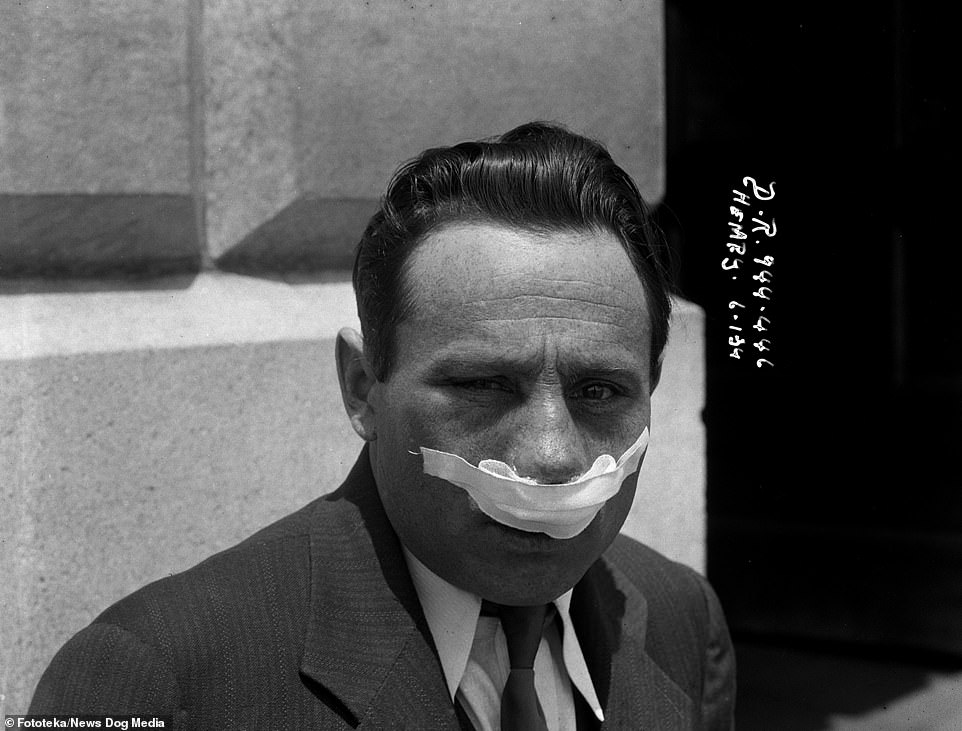 An assault victim poses for the camera with a bandaged nose. This photo is referred to by the LAPD’s archivists as ‘the Chinatown photo’ for its resemblance to Jack Nicholson’s character in the iconic Roman Polanski 1974 film of the same name. These remarkable images went unseen for decades until 2000, when Fototeka’s founders discovered thousands of Los Angeles Police Department negatives housed in a city warehouse in conditions that made them vulnerable to decay and created a fire hazard 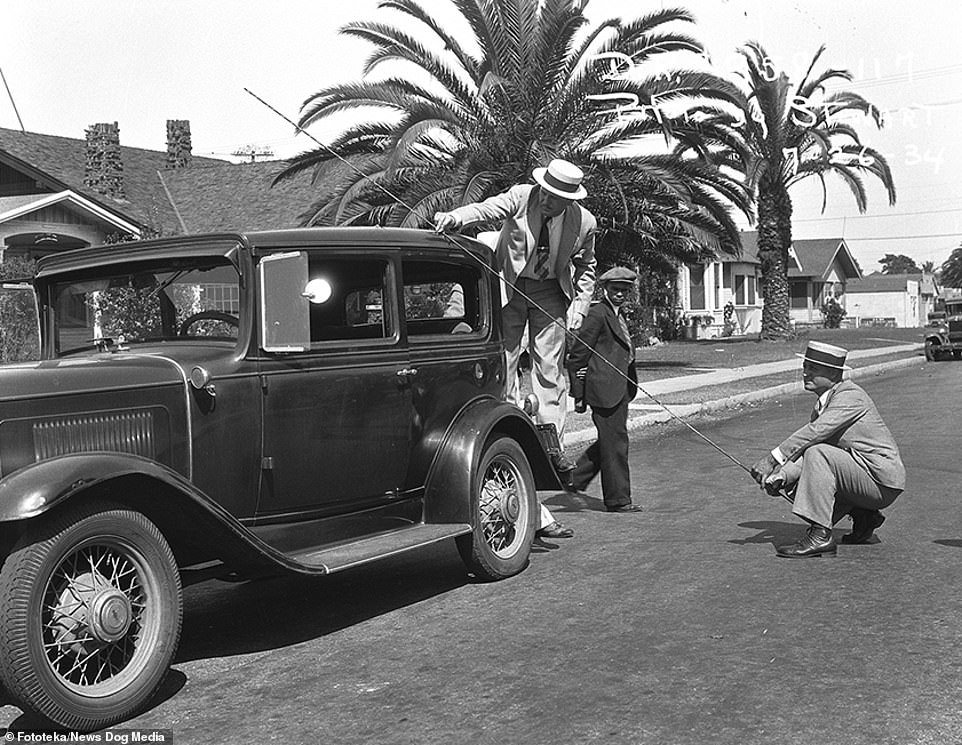 Detectives measuring the trajectory of a bullet on a street in Los Angeles after a deadly shooting in a suburban area of the city. The detectives can be seen using a rod to track the line the bullet took as it passed through a car during the fatal incident 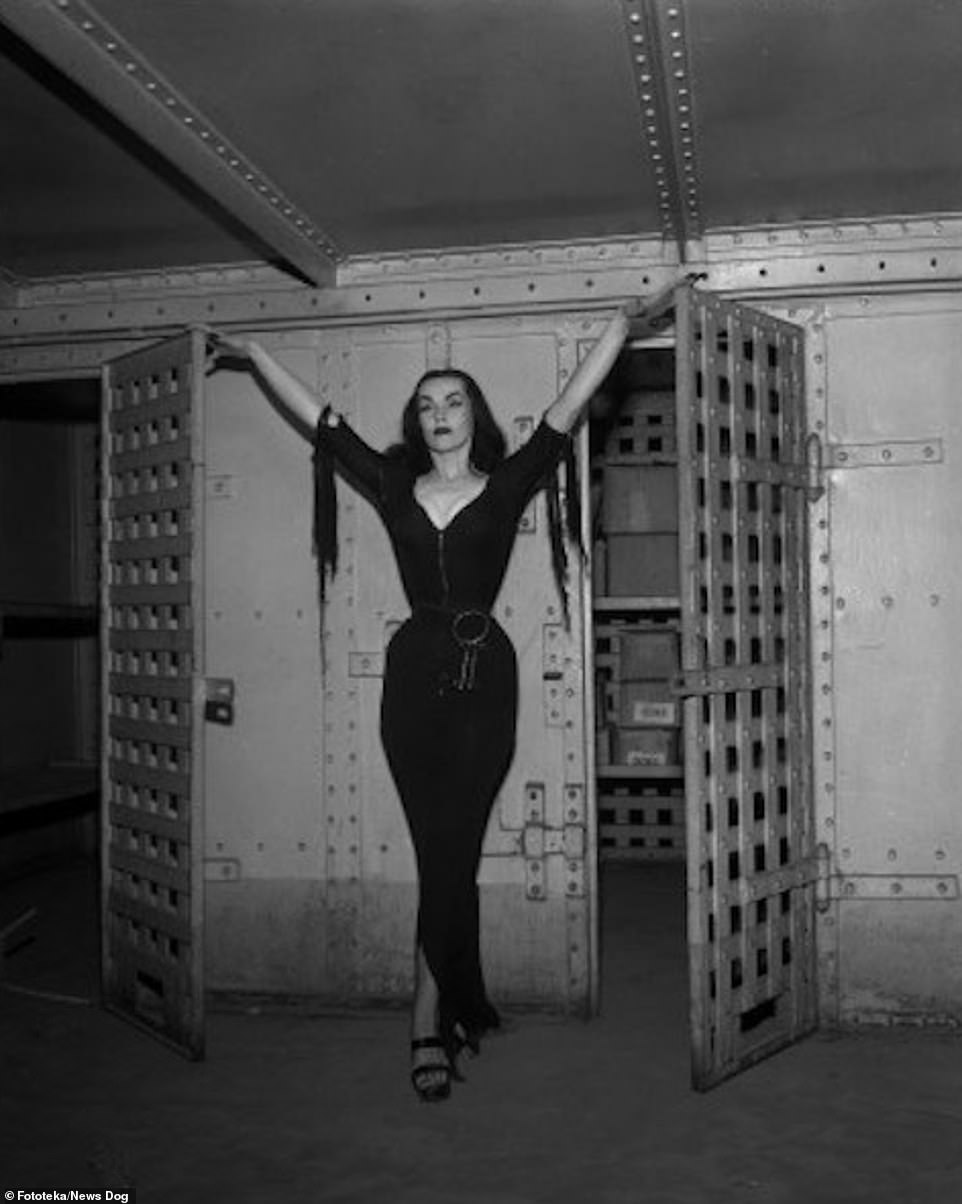 Working it! A 1955 photo shows Hollywood actress Maila Nurmi comically posing in a Los Angeles prison cell in her iconic Vampira ensemble – the character she was made famous for. The actress, aged just 32 at the time, was at the police station following a break in at her apartment where a man forced his way in and terrorized the star for up to close to four hours. Thankfully, the beloved actress managed to escape and rushed to call officers with help from a neighboring shop owner. Maila was often targeted by those who believed she actually practiced the Dark Arts. Her character’s gothic and sexy style was all many Americans needed to link her to witchcraft as she was so opposing to the perfect housewife which was thought to be the ideal role for women in that time frame.  Maila made her name as Vampira in Plan 9 From Outer Space, which some critics brand the ‘worst film of all time’ and had fame as a horror TV host. She was living modestly when she died from a heart attack aged 85 in 2008 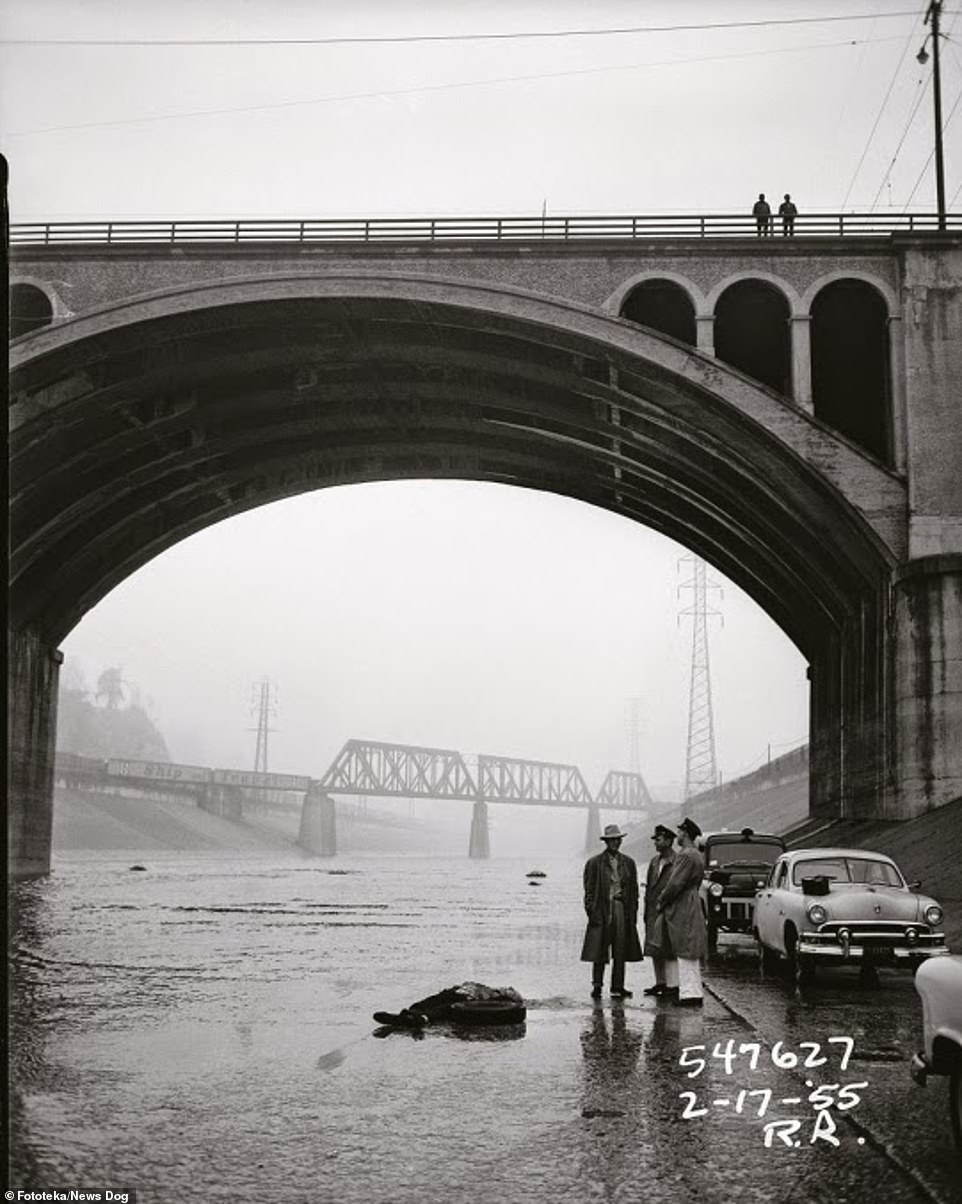 Not all the photographs within the police department’s collection are amusing as some hint at the more chilling times throughout history. One grisly image, above, showcases a lifeless body found lying underneath an eerie-looking bridge over the Los Angeles River on February 17 in 1955. Numerous police officers can be spotted standing next to the body as they assess the horrific crime scene 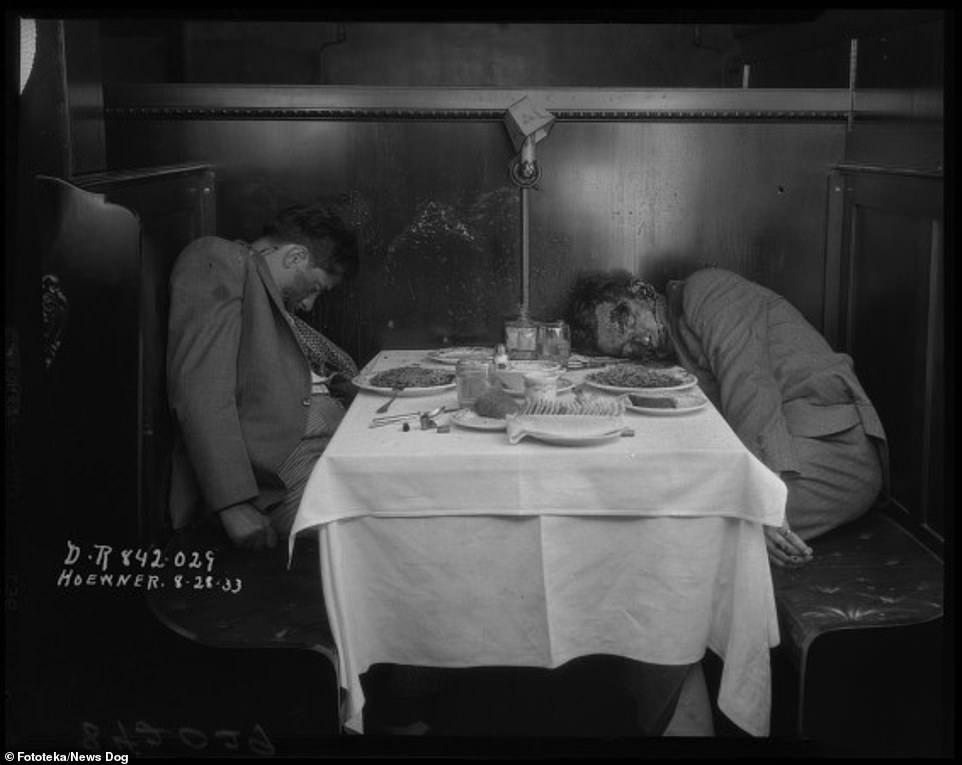 Gunned down at dinner: One chilling picture shows two well-dressed men slain over their spaghetti at an Italian restaurant in August 1933. Police officers at the time believed the hit had been organised by the mafia. Organised crime at the time still had a large hold over the city with the LA family of the American mafia reaching its peak strength in the 1940s and early 1950s under the reign of Jack Dragna. Dragna was an early influential Los Angeles figure who rose to prominence through bootlegging, political, and gambling endeavors 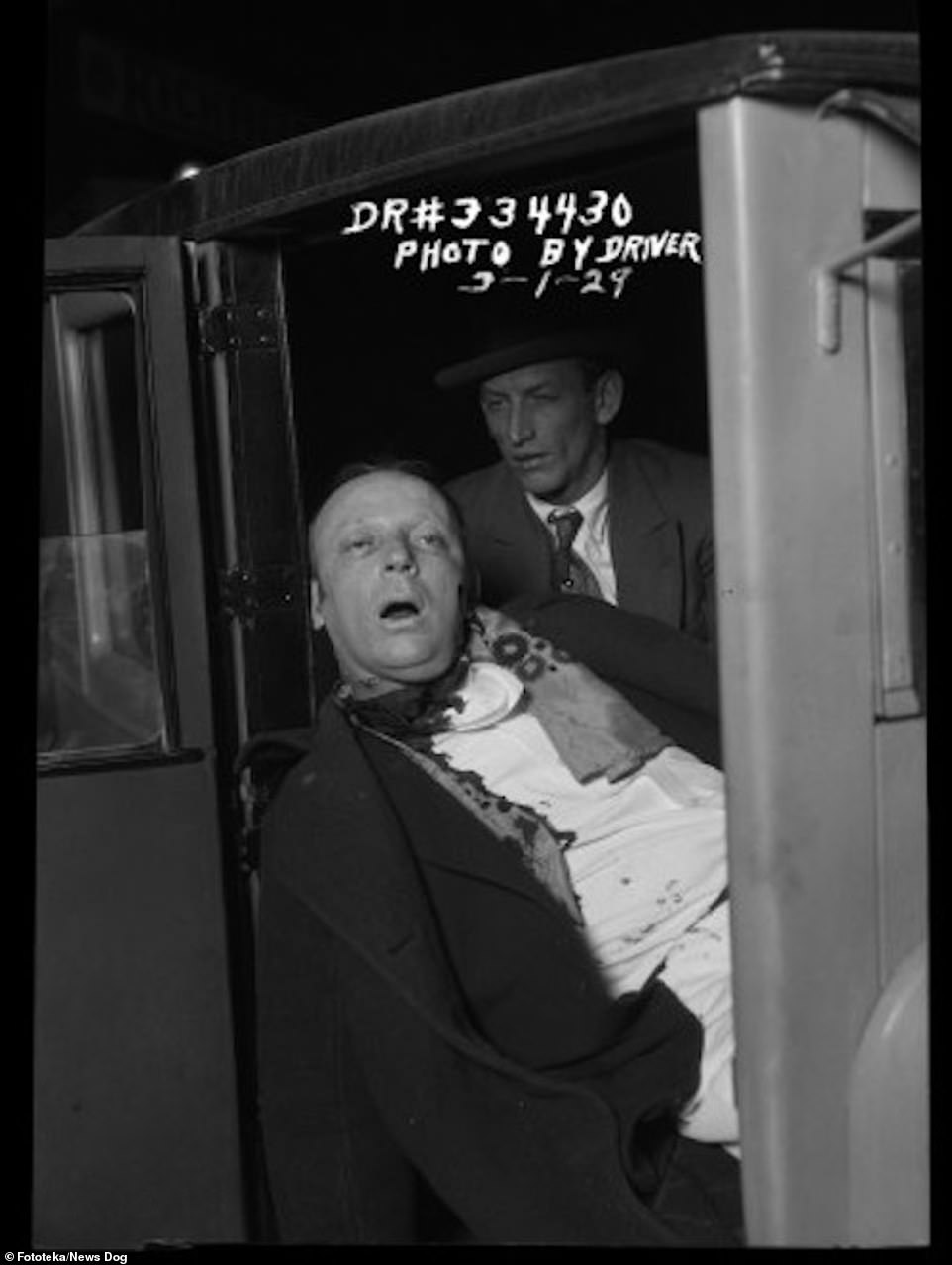 This photograph captures the chilling scene after a middle-aged man had his throat slashed while he was in his vehicle. The incident took place on March 11, 1929, in Los Angeles. During that time, crime was at a high as the backwater town transformed itself into a gleaming city following the First World War. But as thousands flocked to the area to enjoy their dreams and desires, it meant more crime for the officers to investigate 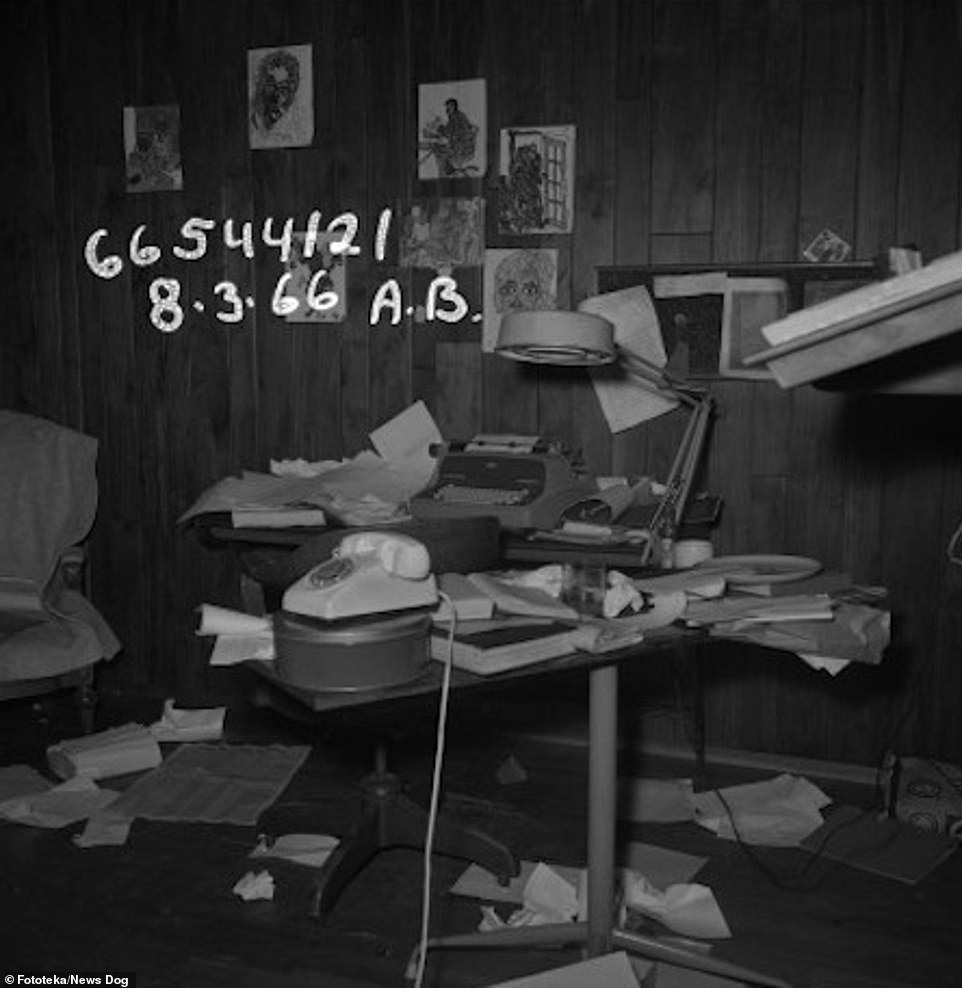 Also appearing in the police department’s collection was a selection of crime scene photos (pictured, his office) from the Hollywood Hills home of legendary comedian Lenny Bruce following his overdose in 1966 – aged 40. The comic was found on the floor of his bathroom in his Los Angeles home. Bruce was an icon of the counter-culture and heralded a new kind of comedy – the Rolling Stone magazine credit him as the third best stand-up comedian of all the time. He poked fun at war, religion, sex and politicians. He was often busted for his obscenity, and in 1962, he was arrested twice in Los Angeles but beat the charges. Still his sets were seen as too taboo for public airing at that time which meant the star soon faced financial struggle as clubs refused to book him – especially after the comic’s 1964 conviction in an obscenity trial in New York. To ease the pain of his hard times, the talent turned to drugs (particularly heroin). Thirty-seven years after his death, the New York State gave the comic a posthumous pardon for his obscenity charge, the first in the history of the state 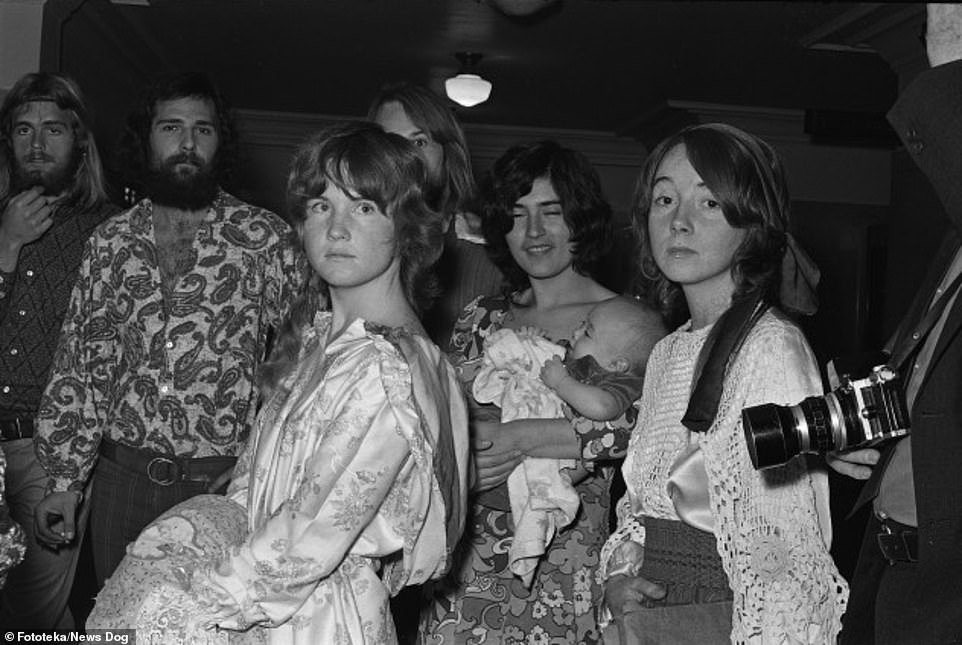 Family affair: The fascinating series also includes a later photograph from 1970 – which shows members of the Manson Family arriving for their arraignment. As members of Charles Manson’s cult, several of the so-called Family committed murders at his request. In August 1969, Manson orchestrated a killing spree that saw members of Manson’s hippie cult – Susan Atkins, Patricia Krenwinkle and Leslie Van Houten – invade homes in Los Angeles’ upmarket Benedict Canyon and Los Feliz neighborhoods, brutally killing all inside. Among the nine victims was actress Sharon Tate, just 26 years old and eight months pregnant. At trial it emerged she had begged for the life of her unborn baby only to be stabbed and hung from a rafter. Other victims who died in Tate’s Benedict Canyon home on the night of August 9, 1969, included hairdresser Jay Sebring, screenwriter Wojciech Frykowski, and coffee heiress Abigail Folger. Ahead of the horrific events, Manson was described as becoming increasingly paranoid, and devised a plan for what he believed would be a race war, named after the Beatles song Helter Skelter. Meanwhile, Manson, Atkins, Krenwinkle and Van Houten were all sentenced to death in April 1971. The sentences were later reduced to life in prison. Manson died in prison in 2017 aged 83. 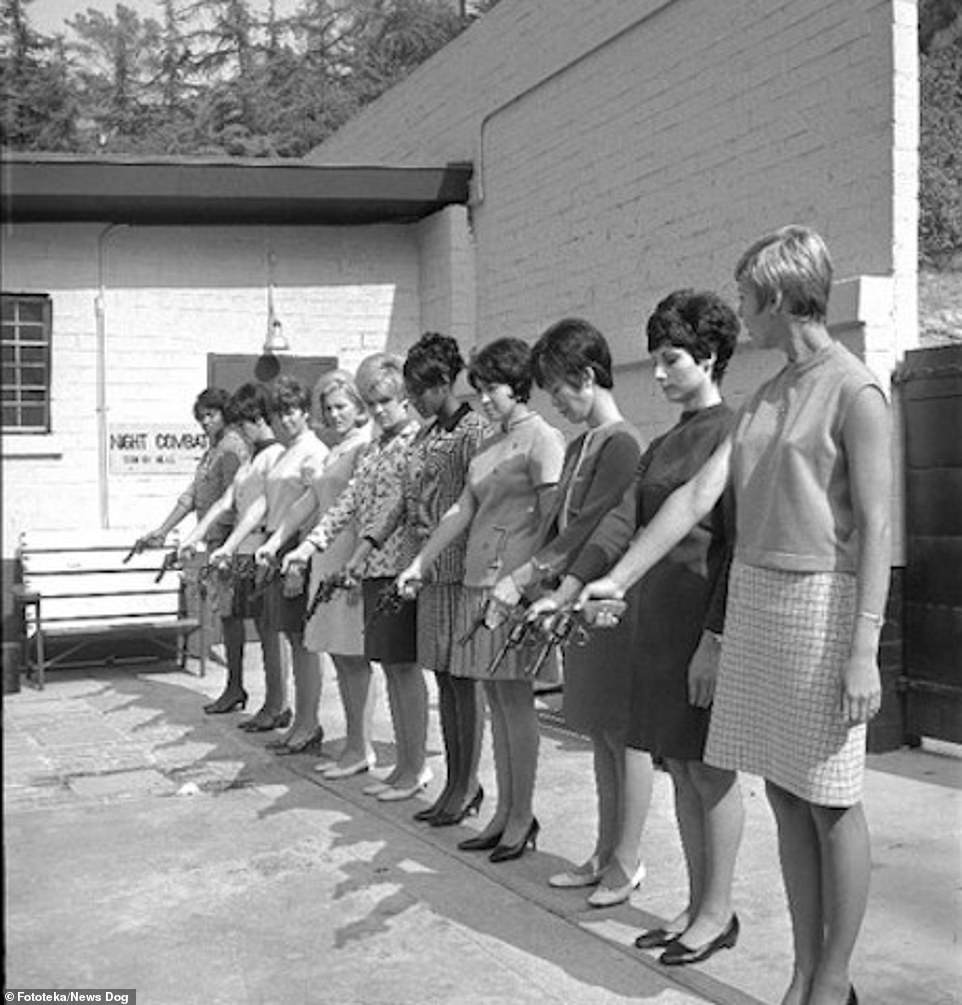 Girl power! This image taken in 1968 is thought to show a group of women being trained with revolvers, as on the far left wall reads a sign saying: ‘Night Combat’. The selection of females appear well dressed as they point their weapons towards the ground, seemingly waiting for an instruction from their superior. Los Angeles Police Department was the first to swear in a female officer, hiring Alice Wells in 1910. In the late 60s and earlier 70s, when this photo was taken, women were much more involved with the police as they were needed to serve undercover when dealing with prostitution and illegal drug sales. The public accepting the female presence was evident in the popularity of TV shows such as Policewoman and Get Christie Love 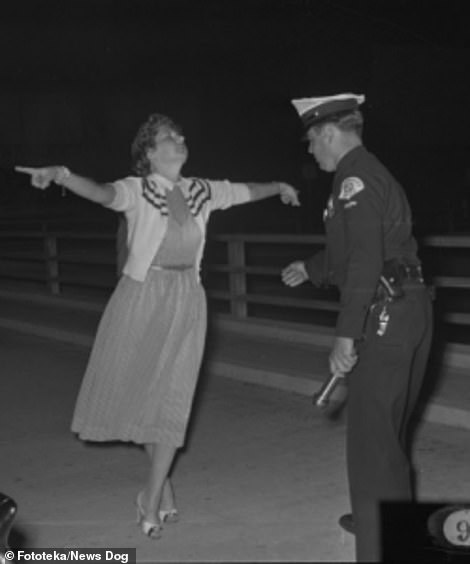 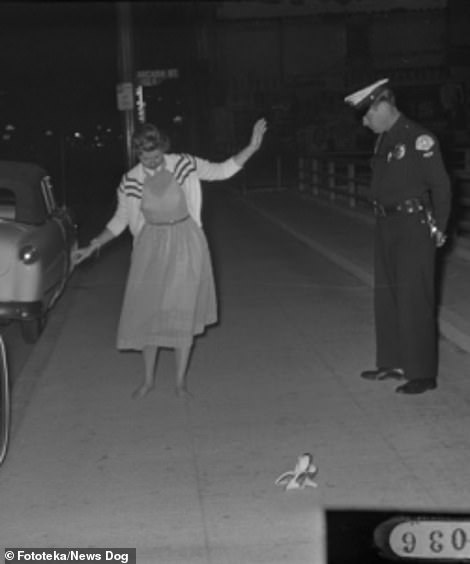 On her merry way! An LAPD officer can be seen in this photograph administrating a Standardized Field Sobriety Test to an seemingly tipsy woman on July 6, 1958. However it appears to not end well for the woman as she begins to stumble after being asked to walk in a straight line. Field sobriety tests, commonly referred to by officers as FSTs, are a series of exercises designed to test balance, coordination and the ability to do two things at once. They aim, in theory, to discover whether a person is sober enough to continue driving. Such tests can involve a one-leg-stand, a walk-and-turn, and alphabet recitation. 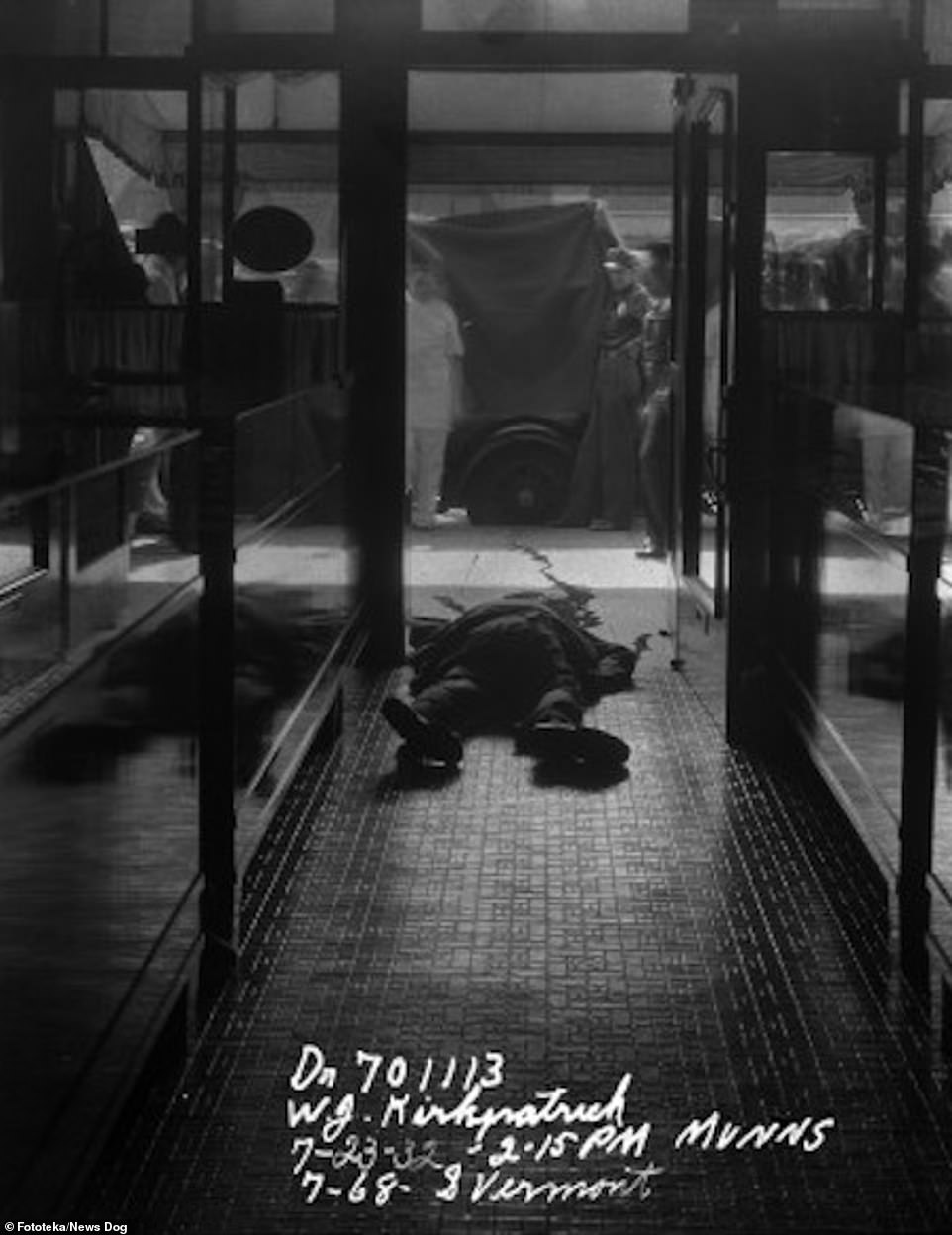 Robbery? At the time of this picture being taken on July 23, 1932, police believed this death to be a result of a jewellery store heist gone very wrong. The image illustrates the work of the officers as they stand away from the body and try to decipher what occurred. With blood trickling away from the lifeless body towards where the police appear to stand, the photograph shows the bloody horrors experienced by some of the people in Los Angeles during the early 20th century 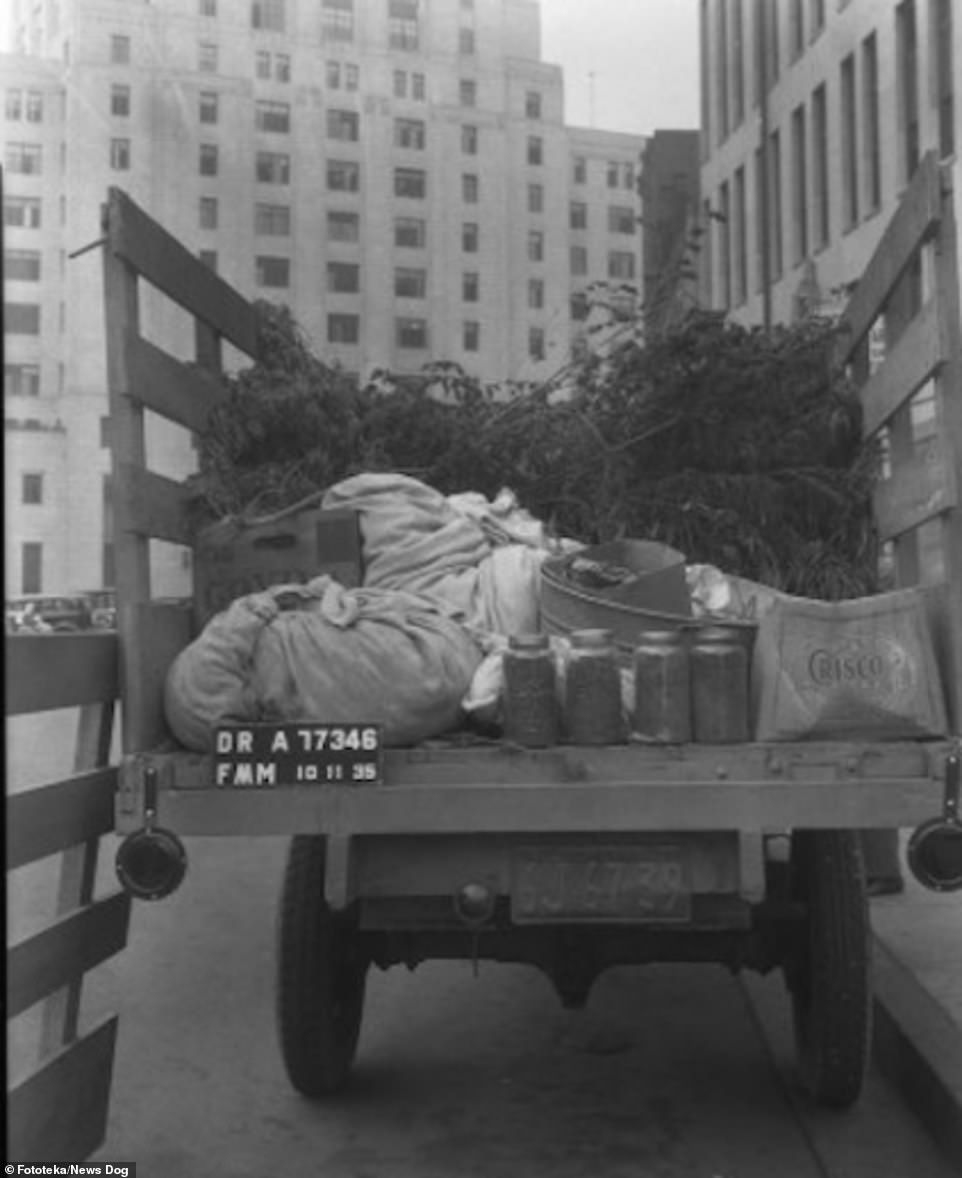 A truck full: In this photograph, a vehicle is captured carrying a huge load of seized marijuana on October 11, 1935. Showing how times have changed, recreational use for the drug became legal for the city in January last year. The change in law began in 2016 when voters approved Proposition 64, which not only legalized recreational marijuana, but also made it easier for people with previous convictions for the drug to expunge their records. Los Angeles has also started giving those people with prior convictions and those from neighborhoods that were previously heavily targeted for marijuana-related arrests priority for licenses to start new marijuana businesses 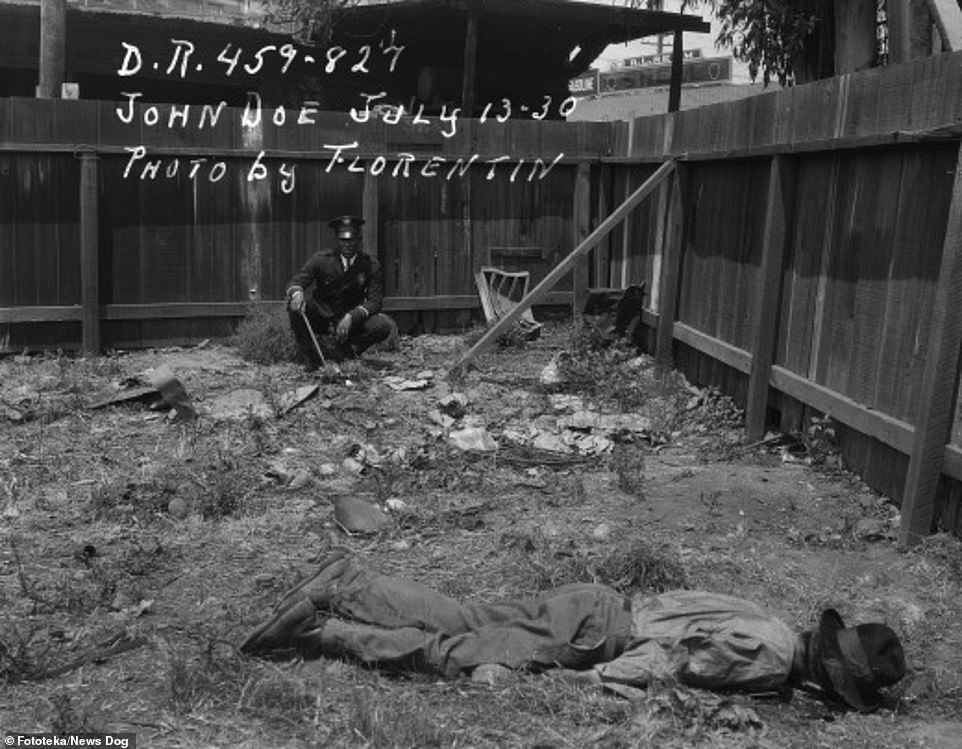 In this eerie photograph, a victim can be seen discarded in a yard, lying face down. A Los Angeles police officer crouches down some distance away as he evaluates the situation. The man’s body was discovered on July 13, 1930. In police records, the victim was recorded as John Doe – their real name was unfortunately unknown. John Doe is often used as a placeholder in legal documents when no information about the person is known. The usage can be traced as far back as the 14th century, although it is unclear why that name was picked or when 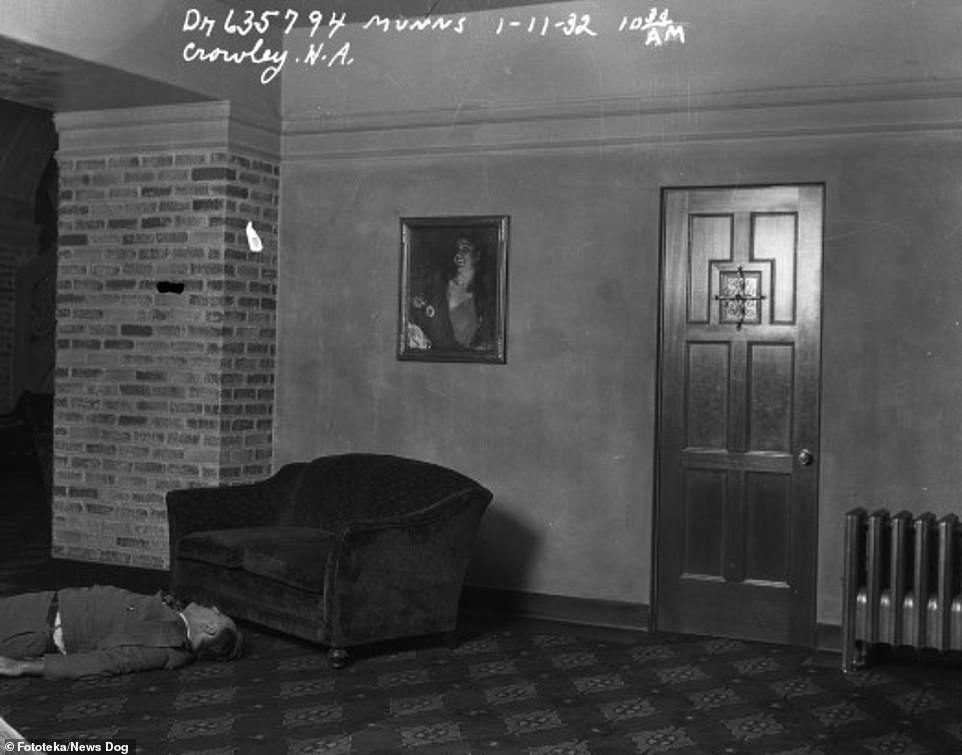 This sinister-looking photograph of a dead body illustrates a sparce room, with a single chair in shot, while the man lies next to it. It was taken on January 11, 1932. Many of these images come from Special Investigations Division – America’s oldest crime lab, which was established in the 1920s. The collection includes everything from forensic shots of bank robbery notes through to morgue portraits, crime scene images and crime re-enactment stills. 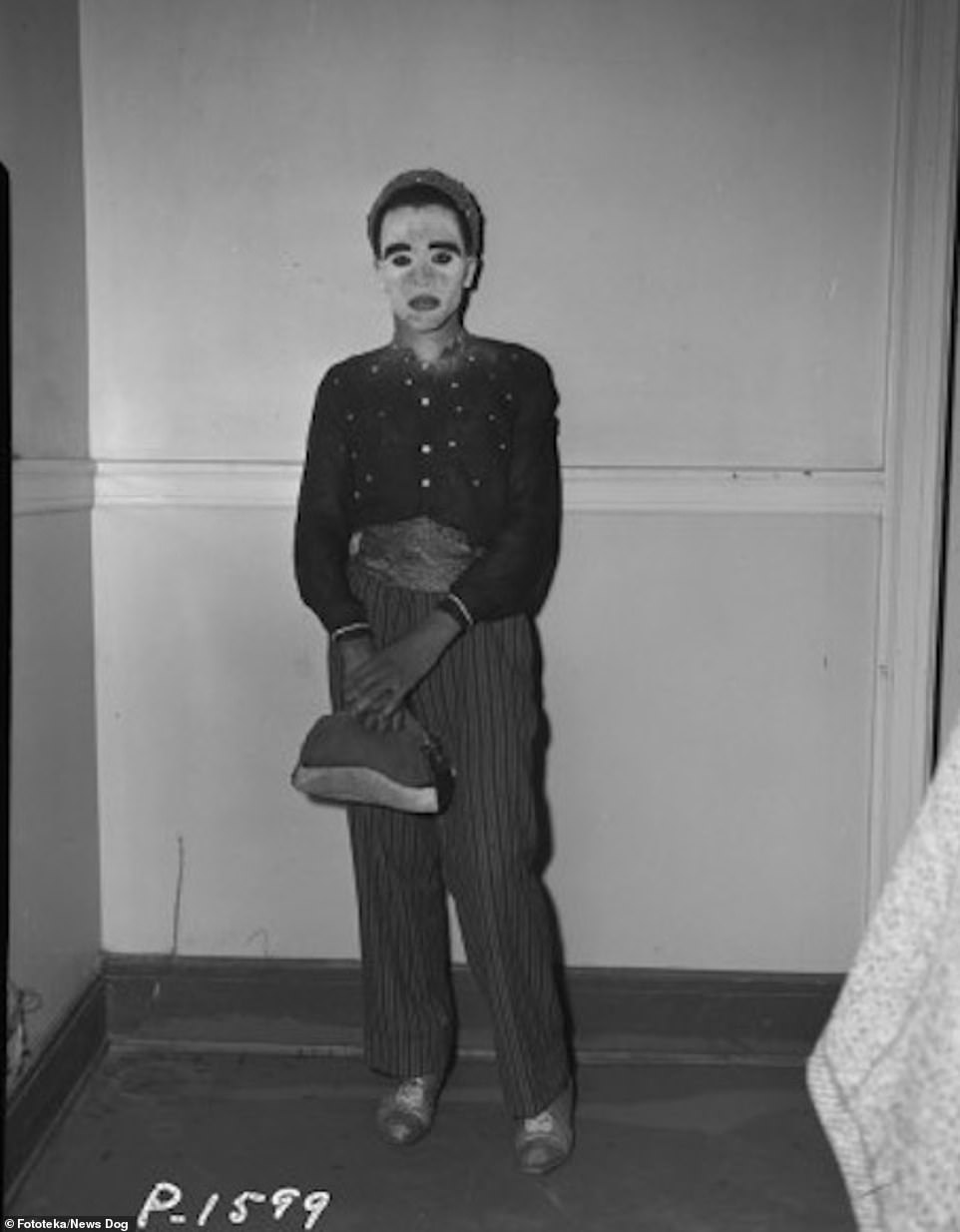 This photograph shows a man with a painted face staring glumly at the camera. He appears to be wearing glamorous clothes, with pinstripe trousers adorning his figure. The person teamed his formal trousers with a shimmering shirt and a matching headband. The Los Angeles Police Department are unaware what this particular shot in 1947 depicts. The department’s archive collection is estimated to be made up of a whopping one million photographs