Forest fires are edging towards radioactive dumps in the Chernobyl exclusion zone amid warnings of a ‘catastrophic’ threat.

Pictures show smoke blowing over the ‘sarcophagus’ of reactor number four, which exploded in the world’s worst nuclear accident in what was then the USSR in 1986.

So-called ‘crown fires’ – when flames spread at great speed from treetop to treetop – are advancing through the uninhabited ‘dead zone’ around the plant, it is believed.

The Ukrainian government is playing down concerns of a radiation release, but witnesses have voiced fears of disaster if the flames are not extinguished.

One fire is just three miles from highly radioactive dumps, according to the State Agency of Ukraine on Exclusion Zone Management.

Forest fires burn at night as seen from the former Chernobyl nuclear power plant in Ukraine, which exploded in a nuclear catastrophe in 1986 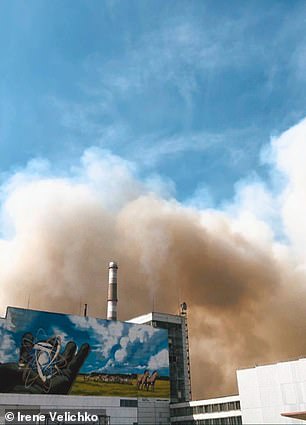 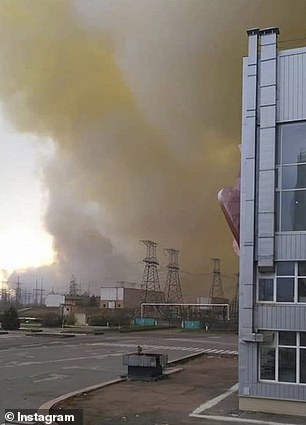 Smoke from wildfires blows over the Chernobyl nuclear power plant, amid fears that fire is spreading quickly through the exclusion zone

One fire is burning around Kriva Gora ghost village, on left bank of the Pripyat River, while another is 16 miles away.

Other ground-level flames were reported as being only a mile or so away from the sarcophagus, but authorities say these were extinguished.

Deputy interior minister Anton Herashchenko said trees had been cut down around the notorious power station to prevent ‘crown fires’ reaching it.

‘The forest was specially cut down around the storage in order to avoid the threat of fire,’ he said. ‘The distance to the green is more than 100 metres (330 ft).’

He claimed an expert involved in securing radioactive waste at the site told him: ‘There would be nothing to burn, even if everything there is filled with napalm.’

Kyiv residents on lockdown over coronavirus were told not to listen to ‘apocalyptic messages’ over radiation.

But people on the scene strongly contradicted Kyiv’s assurances that everything is safe.

Head of the Association of Chernobyl Tour Managers, Anton Yuhimenko, told apostroph.ua that there was a ‘real excess of radiation’in the Red Forest area of the zone.

‘After 3pm [on Monday] the wind changed direction – and the fire went towards Chernobyl nuclear power plant,’ he said.

‘This is now dangerous for the station itself. 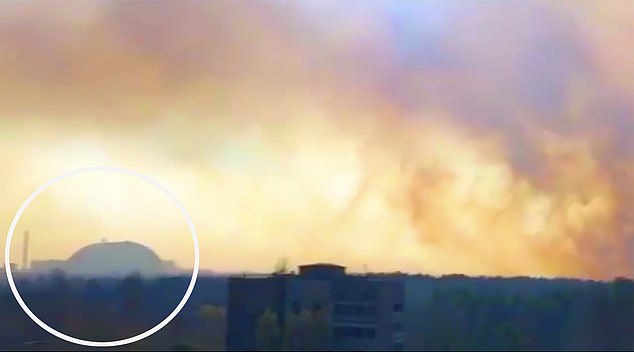 Fire and smoke over the skyline of the exclusion zone, with the dome which now covers the destroyed reactor circled on the left 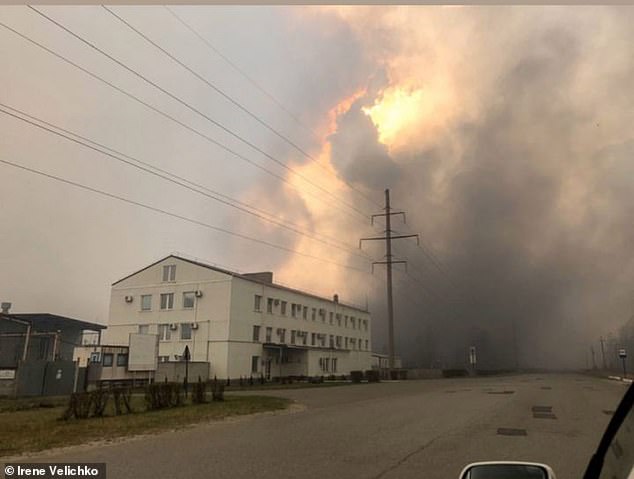 The smoke as seen over an office building on the Chernobyl site. The Ukrainian government has insisted there is no danger to the plant

Yuhimenko continued: ‘Eyewitnesses who are involved in extinguishing the fire, said that the situation is catastrophic, the infrastructure facilities around the station is already burning.

‘From the side of the city of Pripyat there is a sludge site that prepares radioactive waste before sending it to [storage].

‘The fire was recorded as being here. There was ‘dirty’ oil waste, and turbines, and the forest adjacent to them. It was just awful. This is really dangerous.’

He also alleged that the fires in Red Forest and near the Vector storage facility could be the work of arsonists.

‘There are clear facts – the Chernobyl zone began to burn in different places almost simultaneously. This does not happen by itself,’ he claimed.

‘First started to burn Polesskoye, then Red Forest and almost immediately the forest adjacent to Vector.

‘Sparks cannot be carried so easily by the wind, especially over such hefty distance. Fire there is a danger because radioactive aerosols rise far up through heat fluxes and can go anywhere. ‘

One arson suspect was reportedly detained. But Yuhimenko said: ‘Our state does not react to what is happening at all.

‘It seems that in Ukraine nothing happens except coronavirus. And the fact that the entire Chernobyl zone is on fire is of no interest to anyone.’ 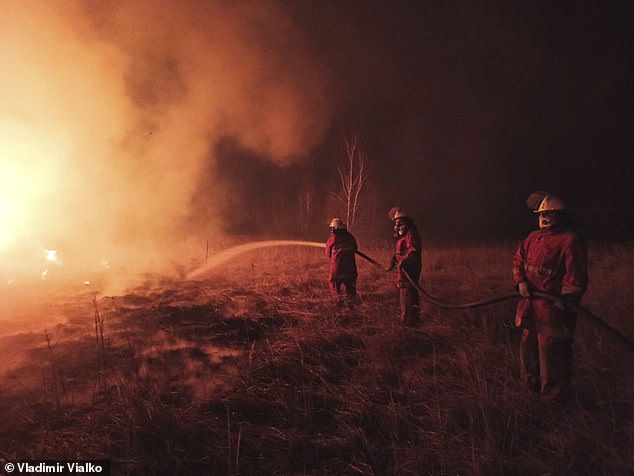 The Ukrainian government has mobilised helicopters and more than 400 firefighters, some of whom are pictured battling the forest fires 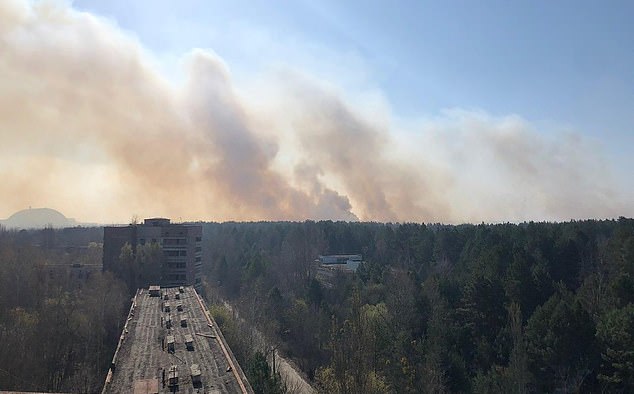 The view of the smoke from the ‘ghost city’ of Pripyat, with the dome of the Chernobyl power plant seen in the distance on the far left 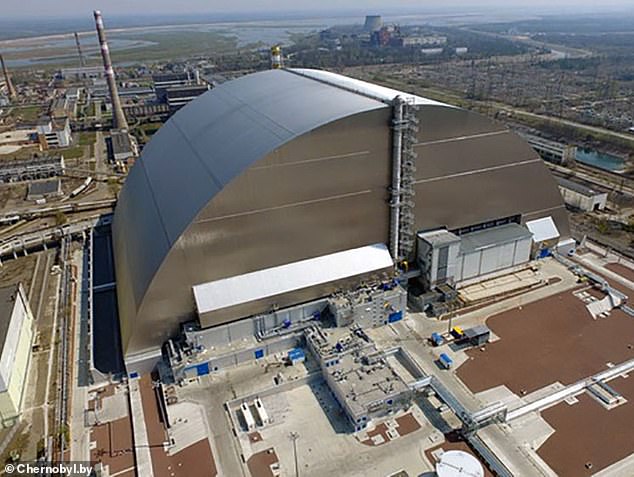 While there are firebreaks, he said: ‘If someone purposefully tries to destroy the zone, it will burn.

‘When crown fire breaks out, there is no way to put it out with the vehicles’ – and, he claimed there is a shortage of firefighting equipment.

‘The State Emergency Service say several planes and helicopters work there. But we saw only one plane and one helicopter – they fly in such a circle.

‘It is clear that on such a scale – when the entire zone is burning – firefighters simply do not physically have time to localise the fires.’

Late on Monday Volodymyr Demchuk, a senior official from Ukraine’s emergency service, said: ‘There is no threat to the Chernobyl nuclear power plant and the storage facilities.’

Kiev has mobilised helicopters and more than 400 firefighters, with planes dropping tonnes of water on the fire. In the 11 days since the first fire began.

Sergiy Zibtsev, head of the Regional Eastern European Fire Monitoring Centre, told AFP that the fire is ‘super-huge’ and ‘unpredictable’.

President Vladimir Zelensky said he is monitoring the Chernobyl fires.

The Emergencies Ministry in Russia’s Bryansk region is monitoring radiation levels but say so far they are normal.

The 1986 explosion – initially covered up by the then Soviet government – sent radioactive fallout across Europe, exposing millions to dangerous levels of radiation.