Overshadowing your tax cuts for all with a bigger tax cut for the rich is an unorthodox move.

The loss of a tax cut for those earning more than £150,000 a year prompts the tiniest of violins for the high earners who miss out, but I had no problem with the 45p rate being removed.

45p or not 45p? Kwasi Kwarteng had to row back on his tax cut for Britain’s biggest earners but there are some middle-class breaks further down the ladder that could prove more popular

Nonetheless, Kwarteng announcing the removal of the 45p rate now and knocking his own basic rate tax and National Insurance cuts out of the headlines was daft.

What was also wrong was bringing in such a cut while retaining higher marginal tax rates for people further down the income scale: the removal of the personal allowance at £100,000 and loss of child benefit at £50,000, as I explain in more detail below.

Unfortunately for taxpayers in either of these positions, I imagine that after the mini-Budget fiasco the Chancellor will be leaving tax cuts for those perceived as wealthy well alone for some time.

But those quirks of our tax code should be sorted out and I think there’s also some other middle-class tax breaks the Chancellor should consider.

Fiscal drag doesn’t sound like much fun and it isn’t. By keeping tax thresholds frozen while wages rise, governments drag more people into the net of higher rates.

The Institute for Fiscal Studies has analysed the Chancellors tax cuts against threshold freezes and has a stark message.

It says: ‘By 2025–26 these freezes take away £2 for every £1 given to households through the headline personal tax cuts. Not only is this true overall, but households in every part of the income distribution will, on average, lose more from freezes over the next three years than they will gain from the headline cuts.’

Among its stats is that freezing the personal allowance will create an extra 1.4million taxpayers and freezing the 40p threshold will mean 7.7million pay higher rate tax, the highest on record and 1.6million more than now.

The Chancellor should stop this stealth tax game and commit to raising thresholds with wages or inflation – maybe he could even come up with a double lock. 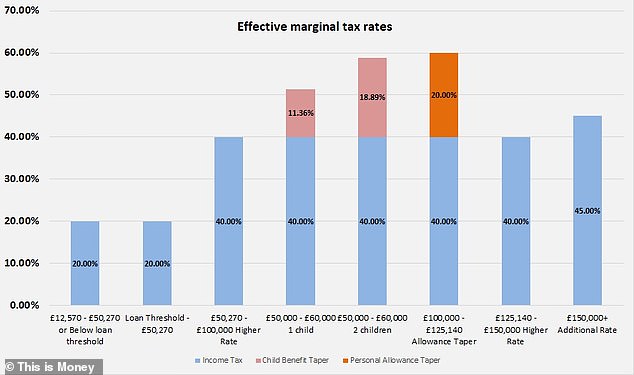 This chart shows how marginal tax rates change through the income scale, with higher effective rates for those seeing child benefit removed and losing their personal allowance than paid by the highest earners with 45p tax (This is Money / Chris Sedgwick)

End the removal of the personal allowance

It’s very hard to garner sympathy for people earning £100,000, but it is clearly wrong to have someone on a lower income pay a higher tax rate than someone on a higher one.

This mad system was brought in during the financial crisis by Labour Chancellor Alistair Darling, but from George Osborne onwards, successive Tory Chancellors have turned a blind eye to a manifestly unfair scenario.

If the £100,000 threshold had risen with CPI inflation it would be £142,000 now. The Chancellor could raise the threshold, but it would probably just be better to bin the personal allowance removal altogether.

This equally unhinged bit of the tax system involves removing child benefit gradually as one parent’s earnings rise between £50,000 and £60,000.

Those parents having their child benefit removed also pay a higher marginal tax rate than our chums on 45p, losing about 51 per cent of their next pound earned if they have one child and 59 per cent if they have two.

Before George Osborne cooked this one up and then introduced it in 2013, child benefit was universal. If the threshold had risen with inflation since then, it would now be £62,500.

The Chancellor could raise the threshold, spread the band across which it is removed to lower the effective rate and do it more gradually, or scrap the child benefit high income charge.

The inevitable train crash that was autumn and winter energy prices was spotted down the tracks last spring – and at that point the government should have doubled down on insulating our homes and making them more energy efficient.

The more we got middle-class homeowners to do this through the warmer months, the less we would have had to fret about subsidising their energy bills in the colder ones.

Once again, Britain failed a test on planning ahead.

The problem is energy efficiency is a tough sell, as people aren’t quite sure what to do, it’s expensive and it takes a long time to earn the money back.

This is where a tax break comes in, with people able to offset money spent on insulation and energy efficiency against their income tax. It’s an incentive and cuts the payback period.

Middle Britain has never fallen in love with insulating its homes, but it loves a good deal (look at solar panels in the early years of subsidies). A chunky tax break on energy efficiency would do the trick.

For a generation of workers auto-enrolment has been a great thing, nudging them into opt-out rather than opt-in pension schemes.

The self-employed aren’t included though and we know many are woefully under-saving.

The puzzle is what to do about this, as the employer contributions lever can’t be pulled in the same way as for the employed.

Why not offer the self-employed a tax credit that provides an extra incentive to save on top of the standard pensions tax relief everyone gets?

Their annual tax return includes how much the self-employed have contributed to a pension, we should give them a 10 per cent tax credit on this: ie, if someone has paid £4,000 into a pension, they get a £400 tax credit.