Forget money, marriage and health are key to happiness

Forget money, marriage and health are key to happiness: Study shows those in a strong union are more content than people who are single and rich

If you thought being rich makes you truly happy, think again – being married is much more likely to bring happiness.

A steady marriage ranks below only good health as a reason why people feel satisfied and happy, a survey into the country’s well-being reveals.

And while money does indeed make you happy, it was found that the way you spend it is what really counts.

The survey, by the Office for National Statistics, found that marriage has now overtaken having a job in the list of factors that people consider important when they mark their lives for levels of well-being and fulfilment

People who go to restaurants or stay in hotels score greater happiness ratings than those with the same amount of money who buy extra food or spend more on insurance or on mobile phones.

The survey, by the Office for National Statistics, found that marriage has now overtaken having a job in the list of factors that people consider important when they mark their lives for levels of well-being and fulfilment.

Five years ago, respondents in a questionnaire said that employment was more important than marriage.

Happiness ratings have been taken since 2011, when the then prime minister David Cameron wanted to go beyond economic figures in working out what voters wanted.

Respondents are asked to give a mark out of ten for how happy they are, how satisfied with life, how far they feel their lives are worthwhile and how anxious they are.

In the year to last September, the ONS said that ‘marital status appears to matter more for people’s life satisfaction than it did six years before, while economic activity contributed less.’

The importance placed on being married may have been affected by a number of factors over the past few years, including falling divorce and unemployment rates. 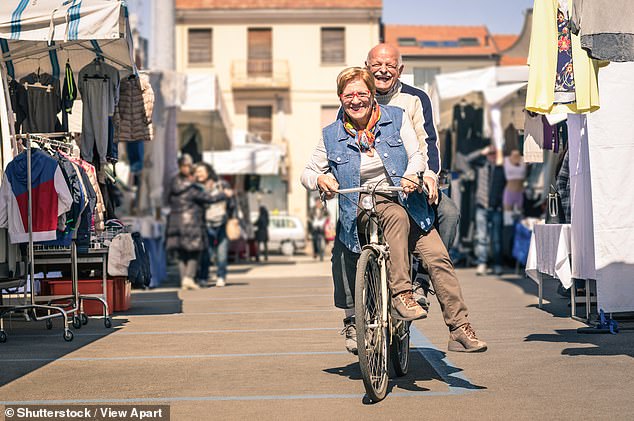 Harry Benson, of the Marriage Foundation think-tank, said: ‘People feel good about life when they feel secure and loved. That can obviously happen in all sorts of family settings. But these figures show what, to many, will be obvious – living with another person who has promised to stick by us no matter what is the foundation of reliable love and, therefore, bound to improve our chances of a happy life.’

And spending money on restaurant meals is not frivolous or a waste, it was found.

‘How we spend our money matters,’ the ONS said. ‘When comparing people with the same level of spending, those able to spend a higher share on experiences – such as hotels and restaurants – are more likely to be very satisfied with life than those spending more on food, insurance and mobile phone subscriptions.’

Researchers said: ‘A higher proportion of total spending on hotels and restaurants is positively associated with very high life satisfaction, as is spending on household furnishings and recreation.’

They added: ‘In contrast, spending on goods and services – such as food, insurance and mobile phone subscriptions – tends to have a negative association, increasing the likelihood of reporting lower life satisfaction.’