Forget relaxing! What keeps you healthy is being busy!

Amid the hustle and bustle of our super-connected 21st century, we all dream of an easy life of leisure.

But often that dream just keeps receding from our grasp. Only last month, the Government announced that it will raise the pension age from 65 to 68 in 2037 rather than 2044. Six million men and women, aged between 39 and 47, will just have to wait for their gold watch.

Meanwhile, smartphones and social media mean we’re never really ‘switched off’. It sounds like a recipe for constant harmful stress — as we’re often being warned.

But a wealth of emerging medical research reveals that having plenty to do may be the key to good health. Staying busy, it seems, helps us to live longer, keeps us strong, fosters sparky brains and could even keep dementia at bay.

Recently, American researchers revealed that we even sleep better when we have lots of reasons to jump out of bed in the morning. Neurologists at Northwestern University in Chicago reported that people who are busily purposeful — in particular having a packed agenda of future plans — enjoy better sleep and are less troubled by insomnia.

The study, in the journal Sleep Science and Practice, focused on older people — the average age was 79. But Professor Jason Ong, the study’s lead author, says the findings should apply to adults of all ages.

And last year, psychologists at the University of Texas reported that keeping busy is associated with a battery of brain benefits. They asked more than 300 adults how frequently they have too many tasks to complete during the day. The volunteers then did tests to measure their cognitive performance. 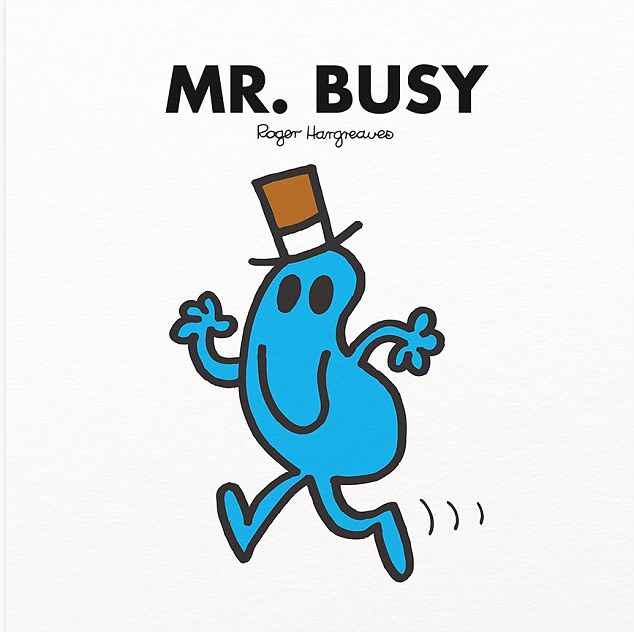 Recently, American researchers revealed that we even sleep better when we have lots of reasons to jump out of bed in the morning.

The investigators concluded that the busier people are — having to squeeze all their tasks into the space of their waking days — the stronger their mental powers.

This was true of short and long-term memory, ability to use logic, and ‘crystallised intelligence’ — the ability to put a lifetime’s skills and knowledge into practical use.

The research, published last year in Frontiers in Aging Neuroscience, added that busyness had a bolstering effect on brain power, regardless of age or education.

How to get the most nutrients out of food. This week: Spinach

1. Make spinach soup. A typical bowl contains about 100g of the leafy green, which provides 15 per cent of your daily iron requirement and a fifth of your daily calcium.

2. Mix young and old leaves. Baby spinach has higher levels of the B vitamin folate (vital for pregnant women) and magnesium (important for the nervous system) while mature leaves have vitamin E and vitamin A (needed by the immune system), calcium and iron.

3. Eat a side of creamed spinach — fat helps the body absorb vitamin A from the leaves. In a 100g serving of mature spinach there’s 80 per cent of the RDA of this vitamin.

4. Saag Aloo, the Indian curry of potatoes and spinach simmered in tomatoes is crammed with potassium, which helps to maintain blood pressure.

5. Go for the classic spinach and eggs. They’ll top up your levels of lutein and zeaxanthin that could limit your risk of macular degeneration, the eye condition that causes age-related blindness.

Sara Festini, the lead author of the study, suggests that busyness gives us more opportunities to learn through the variety of situations in which we find ourselves. This keeps our cognitive faculties stimulated and challenged, which may boost ‘neuroplasticity’ — the ability of the adult brain to rewire itself to learn new skills.

But Dr Festini recognises that there are two types of busy: good and bad — and the bad type can harm our brains.

‘Stress has been shown to narrow attention, impair memory and interfere with knowledge acquisition,’ she says.

The crucial factor in determining whether our busyness is stressful or beneficial is whether we feel that we have control over what we are doing, explains Linda Blair, a clinical psychologist with a specialist interest in stress management. ‘Having to be busy when you have no control over workload can cause stress and potentially harmful chronic rises in the stress hormone cortisol,’ she says.

Chronically high stress hormone levels are associated with mental problems including anxiety, depression and impaired memory and concentration. They can cause physical inflammation throughout the body, which may precipitate illness such as cardiovascu- lar disease.

‘Busyness is good when you perceive you have control over the hours you are busy, what you are doing and who you are with,’ Linda Blair says.

It is easy for people to tell if they are ‘good’ busy, she adds. ‘It will be easy to switch off from work, you will have energy for your other interests and you sleep well.’ The difference between good and bad busyness can come down to a matter of mental approach, Linda Blair adds: ‘It might just be about focusing on the good experiences you can have with the money you may earn from being at work a lot.’

Keeping busy as we age appears to be particularly beneficial — even if it means working beyond retirement age.

In May, Italian neuroscientists warned that people aged over 50 who retire early face an increased risk of losing muscle strength, a key indicator of encroaching illness. Their study, in the journal Health Economics, examined data on handgrip strength among retired people aged 50 or over in 12 European countries. The investigators found that retirement speeds up age-related loss of strength.

‘Early retirement may not be such a good deal for retirees’ longevity and physical functioning late in life,’ warned the researchers at the Italian National Research Council.

Working for even one year beyond the retirement age can reduce your odds of later dying prematurely by more than 10 per cent, according to a 2016 study by Oregon State University.

One important reason for this may be that late retirement delays the onset of dementia. Last year, a report in The Journal of Nutrition, Health & Aging found that people who retired later were significantly less likely to have developed cognitive difficulties.

It is psychologically healthier to be occupied. One of the problems with being unemployed is suffering from a stressful lack of busyness, and a lack of a place in society. An idle retirement may have the same effect.

Voluntary work appears to have a similar effect. ‘We monitored 1,001 Swedish people who retired at 65,’ explains Professor Yannick Griep, a psychologist at Canada’s University of Calgary. ‘Those who did voluntary work for one hour a week were 2.44 times less likely to have dementia two years later.’

Professor Griep says he suspects it is because volunteering keeps seniors physically, mentally and socially active — keeping their brains stimulated. Indeed, research this month revealed that keeping the brain active through social activities can build cognitive strength in old age and ward off dementia.

Beyond this, there may be another benefit. ‘Being busy means that you don’t have time to sit and think about how unfair life is,’ says Dr Jane Prince, a psychologist at the University of South Wales. ‘Busyness directs your attention away from yourself, your aches and pains.’

She told Good Health: ‘It is psychologically healthier to be occupied. One of the problems with being unemployed is suffering from a stressful lack of busyness, and a lack of a place in society. An idle retirement may have the same effect.’

Dr Prince suggests that it doesn’t matter what you are doing but the key is routine. ‘Routines help you to get a sense of identity,’ she says.

So, while keeping busy looks to be essential for our health, it seems that what you choose to do is no one’s busyness but your own.