Forgetting where you’ve parked your car could mean ADHD

Symptoms: Increasingly, a number of adults are being diagnosed with the brain disorder

Most of us make silly mistakes from time to time and are able to laugh them off. That’s what I used to do when I accidentally left the bath overflowing or mislaid my purse for the umpteenth time.

But when I left my debit card and £50 in the cashpoint machine some years back, I didn’t see the funny side. Nor was I laughing when I forgot to turn on the cooker and served a stone-cold casserole.

When I ‘misplaced’ my car, not for a few minutes or hours but for several days, completely forgetting I’d left it on the forecourt of the petrol station up the road, I realised enough was enough.

With a career and two children now aged eight and ten, to care for, I had to get help.

And that is how, two years ago, aged 43, I found out I have a form of attention deficit disorder known as ADHD Predominately Inattentive Type, or ADD.

Rather than experiencing the hyperactivity often associated with ADHD, for me, the chief issue is distractibility. I confess the news was not a shock.

Having read about attention disorders, I’d found many of the symptoms familiar and mentioned this to my GP. He referred me to an NHS psychiatrist who, after taking down my personal history and reading answers to questionnaires from my mother and husband, Vince, confirmed my hunch.

The reaction from friends was mixed. Some gave an ‘ah, that makes sense’ response; others were dismissive. ‘Don’t be ridiculous,’ one said. ‘Only naughty little boys have that.’

It is a common misconception. According to the National Institute of Health and Care Excellence (NICE) between 2-4 per cent of adults in the UK have ADHD in one form or another, although some experts think the true figure may be far higher.

The symptoms vary: some people are hyperactive and impulsive; others, like me, struggle with paying attention, are forgetful, easily distracted and regularly lose things.

Our brains find it hard to focus on one thing at a time and instead seek out new stimulation. The result is a trail of half-finished tasks, mislaid belongings and a sense of under-achievement. It’s also common to have mood swings, difficulty sleeping, frustration and troubles with planning.

The problem is thought to arise from differences in brain structure that leads to imbalances in the levels of chemical messengers such as dopamine and noradrenaline that normally help regulate behaviour, says Dr Valentino Pironti, a neuroscientist and clinical psychologist at the private Cambridge Adult ADHD Clinic.

‘There is a strong genetic association,’ he adds. ‘But being premature, having a difficult birth or being born to a mother who smoked or drank during pregnancy can be factors, too, as can intense stress or early deprivation.’

I suspect mine has a genetic link as other family members have similar symptoms to mine. Whatever the root cause, the effects can be profound says Dr Mark Salter, an NHS psychiatrist and spokesperson for the Royal College of Psychiatrists.

The exact cause of ADHD is unknown, but the condition has been shown to run in families. Research has also identified a number of possible differences in the brains of people with ADHD compared to those who don’t have the condition.

Other factors that have been suggested as potentially having a role in ADHD include:

It’s thought that around 2% to 5% of school-aged children may have ADHD.

ADHD can occur in people of any intellectual ability, although it’s more common in people with learning difficulties.

‘The chaos adults with ADHD live with impacts on their relationships,’ he says. ‘The fact they find it hard to follow tasks through causes problems at work, and they are more likely to retreat socially.’

Low self-esteem is another problem, says Dr Pironti. In my case, though the disorder has not held me back at work or socially, it has affected my confidence. Struggling with form-filling or operating a coffee machine often makes me feel stupid.

There is no simple ‘cure’, though medication that improves the flow of dopamine can help some sufferers and may be given together with cognitive behavioural therapy.

After my diagnosis in 2015, all I was offered was a low dose of Concerta, a drug similar to Ritalin, that stimulates the part of the brain responsible for attention and planning.

When I started taking it I felt as if the world had slowed down, as I could concentrate on one thing without getting bored or distracted. But the effects weren’t life-changing, and it was (and still is) a problem remembering to take the medication.

But then I read about neurofeedback — a form of brain training where the mind subconsciously learns to regulate itself. It works, in effect, by holding up a mirror to the brain, showing it when it is working well and when it’s not.

The technique is currently being reviewed to see whether it could be funded by the NHS as a treatment for ADHD.

With little to lose, I signed up for five taster sessions with BrainTrainUK, a nationwide clinic that treats, among other things, my condition.

It’s not cheap — typically, patients need 20 sessions at £90 each, for long-term changes to take effect. But I am excited and nervous when I arrive at BrainTrainUK’s Hertfordshire clinic for my first appointment in July. Zuzana Radacovska, a psychologist, attaches electrode sensors with a substance like Vaseline to my forehead. These sensors apparently send information back to her computer about how well that part of my brain is working. 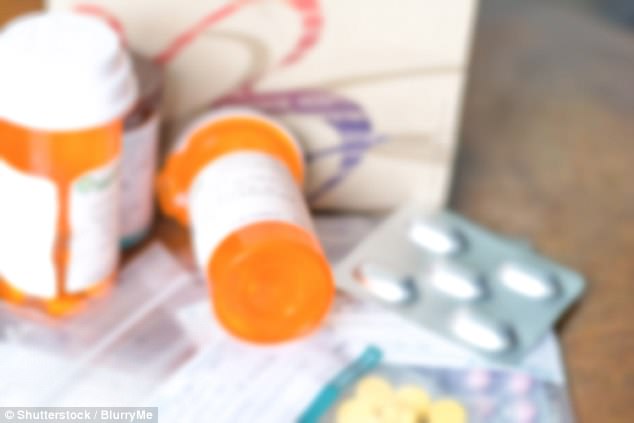 Medication needed? A form of brain training where the mind subconsciously learns to regulate itself could be an alternative to drugs

This is fed directly back to me through the screen. When my brain is performing as it should, the picture on the screen becomes louder, bigger and clearer. But when the brainwaves aren’t working well, the picture becomes fuzzier and smaller.

All I have to do is sit and watch a film and pay attention to the detail so the image stays bright. I choose an old favourite, Forrest Gump, and Zuzana attaches the sensors first to my temples.

The results are instant. Normally when I watch a film, my focus is on the ‘big picture’ things such as the characters’ emotions.

Now, my concentration doesn’t veer off, and I start really focusing. Directed by the neurofeedback, I notice a remarkable amount of detail in the movie.

This feels disconcerting, as I am unused to processing so much information at once, and Zuzana explains afterwards that this is because the ADHD brain is not used to picking up detail. But, she says, like a camera, we all have the ability to adapt our focus.

At home, I practise focusing on things close up, and, aside from the cobwebs I can suddenly see, I realise I have been missing out on much of the essential nitty-gritty.

By the time I return for my second session, my brain is adapting its focus to absorb both the plot and the finer details.

When I start daydreaming or asking Zuzana questions, I feel chastened by the shrinking, fuzzy screen. By my third session I am watching the film without disruptive thoughts, and the screen shrinks less than before.

Over the next week, I notice I am less likely to put off boring or tricky tasks and can stay on track. But even with neurofeedback and medication, I still lose my car keys one morning, making my children late for school. And it seems no amount of Forrest Gump will make me tidy or organised. By the last session, I am noticeably calmer. But my brain still doesn’t always work as it should.

Dr PIRONTI says many patients who notice positive changes during neurofeedback sessions don’t always see an improvement during their daily lives. And the scientific evidence for neurofeedback is somewhat hazy; studies found it has only minimal benefit for ADHD, although one 2016 study at King’s College London was more positive.

All the 31 teenagers taking part had an improvement, but this was using a new, more accurate form of the treatment, called fMRI neurofeedback, which is not yet available in the UK.

A month on, I’m still unsure of my verdict. The sessions haven’t cured me, but I now notice when I am losing focus. I force myself to absorb detail and I don’t lose things as often.

Now, instead of being stuck in the constant chaos, at times I can leave it behind.