This is the dramatic moment a forklift operator caused an entire warehouse of goods to fall like dominoes when he bumped into a shelving unit.

The clip, filmed inside an unnamed distribution warehouse, captured the driver as he made his way down an aisle between two tall pallet racks.

Two workers stood at the foot of the aisle checking boxes as he slowly travelled between the shelves, but disaster struck as he reached them.

The clip, filmed inside a distribution warehouse, captured the driver as he made his way down an aisle between two tall pallet racks

It is unclear where the clip, captured in July last year, was filmed, which company uses the warehouse, or the condition of the driver after the accident.

He veered his forklift to the left as he came to a stop, slightly nudging the racks of boxes with the top of the vehicle.

Seconds later, the entire unit collapsed, covering the driver and his forklift with dozens of cardboard boxes.

A white product spilled from the packaging when it broke on impact, covering the floor of the warehouse.

The forklift then appeared to be pushed to the other side of the aisle by force of the fall, causing the second pallet rack to fall in a similar way. 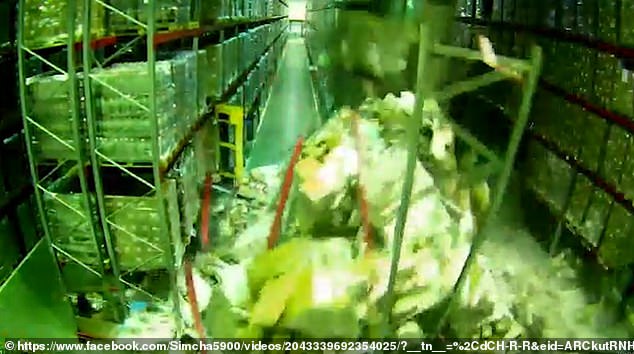 The driver veered his forklift to the left as he came to a stop, slightly nudging the racks of boxes Seconds later, the entire unit collapsed, covering the driver and his forklift with dozens of cardboard boxes

Other shelves in the warehouse followed suit, falling from the back right of the clip until the entire right hand side of the building had fallen.

At the end of the footage, the forklift was no longer visible under a pile of cardboard boxes and metal shelves as bewildered staff stared at the disaster.

The left hand side of the warehouse was still standing, however, left undisturbed despite the domino effect elsewhere.

Do you know where this footage was filmed?

It is unknown whether the forklift driver was injured or managed to keep his job after the catastrophe.

Some viewers took to the internet to comment on the catastrophic scenes.

Another said: ‘Roll of paper towels, dust mop and pan, and as good as new to me.’

A third suggested the problem must be with the unstable shelving, and not the worker.

He said: ‘If that’s all it took to bring down 3/4 of the warehouse, then the problem lies in the shelving, not the worker.’