A former Australian ambassador to eastern Europe has defended Russia’s invasion of Ukraine – invoking a very angry response from a Ukrainian MP living in the war zone.

Tony Kevin, a retired diplomat and self-published author, regularly hails Russia’s president Vladimir Putin as a respected leader, shares Kremlin propaganda on his social media accounts, claims ‘Ukrainian Nazis’ are behind the bombings, and that Russian forces are not targeting civilians.

The former ambassador to Poland who was a diplomat in Moscow during the Cold War also claimed very few people in Ukraine have been killed over the four weeks of the current conflict.

The estimated death toll among soldiers varies significantly between the two sides, while the United Nations say 780 civilians have died as of Wednesday.

‘In the days the war’s been going, there’s been an absolutely, incredibly small number of casualties,’ Mr Kevin said on Nine’s Under Investigation program hosted by Liz Hayes.

‘The Russians won this war on the 24th of February and what’s been going on since then are bands of armed thugs who control some major cities.

‘(Mr Putin) has said that Russian troops will not attack civilians.’

‘This is a total nonsense,’ she said.

She was also incensed at his repeating of Mr Putin’s claim that Nazis had taken over Ukraine, which needed Russia to save it.

‘You’re saying the Nazis? What are you talking about right now?’ she said.

‘My country’s been bombarded by crazy person. My people are being killed and you are saying this insanity on camera right now.

In a lengthy Facebook post on Wednesday, Mr Kevin suggested Ukrainian Nazis and not Russians were bombing buildings in what he described as ‘Ukronazi fake flag operations’.

Ms Rudyk was particularly upset at his suggestion he knew more about what was happening in Ukraine despite not personally witnessing the invasion. 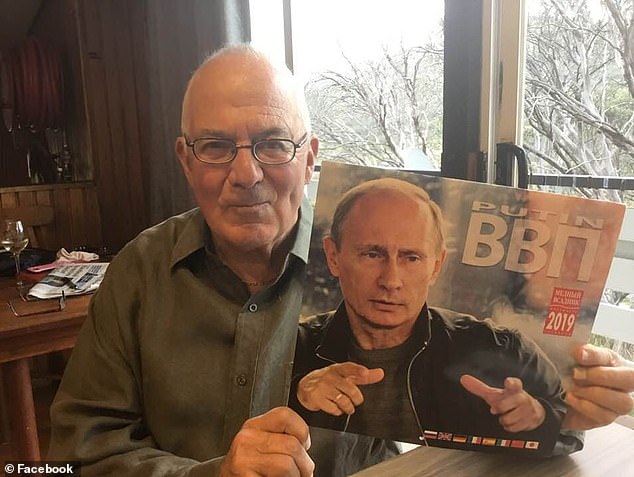 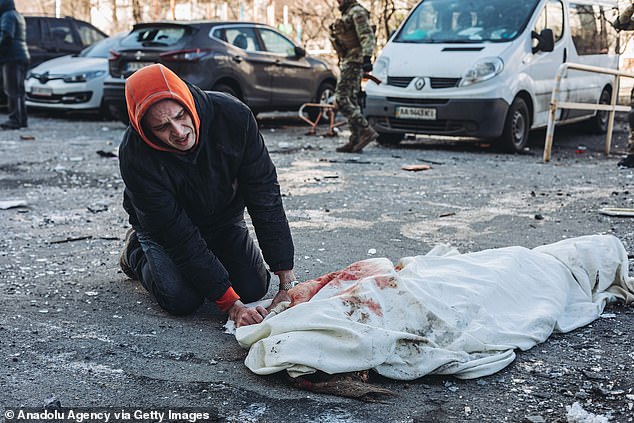 The former ambassador to Poland who was a diplomat in Moscow during the Cold War made the extraordinary claim very few people in Ukraine had been killed, despite strong evidence of Russian air strikes on civilians in a maternity hospital and a makeshift shelter in a theatre (pictured is a man mourning the death of his mother in Kyiv after a Russian attack)

‘I’m here. I’m telling you the people are dying,’ she said.

‘You’re telling some nonsense about Nazis that you can never seen because you’re sitting in your warm and whatever safe place and you dare to tell me what’s happening in my own country.

‘I’m telling you what’s going on here, on the ground, where people are being killed by Putin who is trying to take our country just because he is crazy.

‘There is no false narrative: there is the truth and the BS you’re feeding to people right now.’

Mr Kevin, who has recently visited Moscow, said Mr Putin had the support of the Russian people despite widespread evidence of vote-rigging in elections.

‘Vladimir Putin has the confidence of his people,’ he said.

‘I believe that Putin is the legitimate president of Russia. 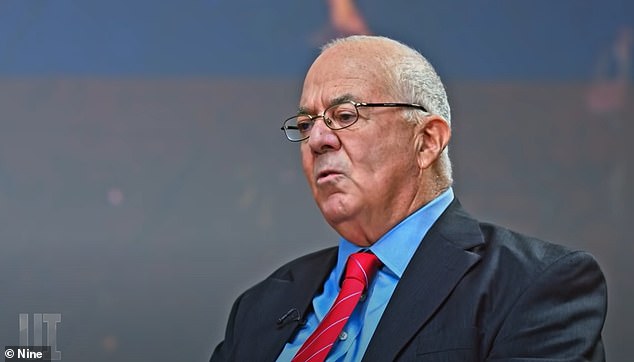 Tony Kevin, who has recently visited Moscow, even suggested Putin had the support of the Russian people, despite only staying in power because of rigged elections

‘He speaks on behalf of the Russian people – I would be saying, “Keep your nerve”.’

He added that ‘Ukraine will be a happier place, whether in a few weeks or a couple of months’.

British chemical weapons expert Hamish de Bretton-Gordon, who also appeared on the program, said Mr Putin had relied on people around the world to spread his ‘vile propaganda’.

‘If your man Tony believes that there are only a few hundred people dead and that this is some kind of peace mission, then Putin is winning,’ he said.

Mr Kevin’s shared an article from the Kremlin-backed Russia Today website on his Facebook page on Wednesday. 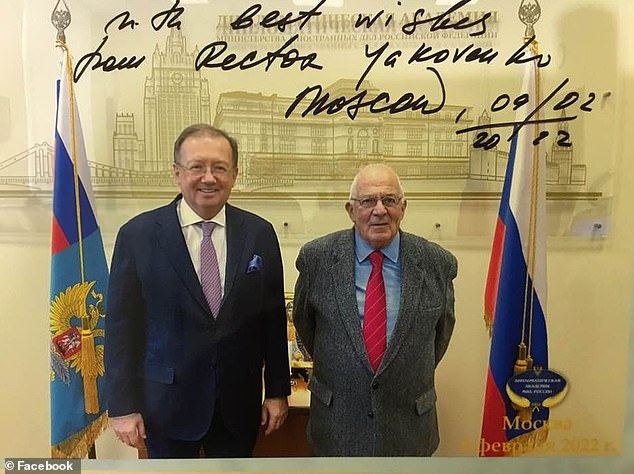 Tony Kevin, who has recently visited Moscow, even suggested Putin had the support of the Russian people, despite only staying in power because of rigged elections (he is pictured right with Russian diplomat Alexander Yakovenko

The text is typed out in his Facebook message to get around the social media giant’s censorship of Russian state-controlled media.

Mr Kevin suggested Ukraine’s President Volodymyr Zelensky does not have the widespread support of his own people, even though the former actor and comedian won a landslide 73 per cent of the vote in 2019, defeating incumbent Petro Poroshenko.

Mr Kevin said that Nazis were a threat in the Ukraine, and could ultimately wrest power away from Mr Zelensky who is Jewish and lost relatives in the Holocaust.

The Ukrainian far right played a significant role in the 2014 uprising that drove out the elected pro-Russian president Vladimir Yanukovych.

‘Z’s biggest problem is still the risk that Ukronazis may mount a сoup against him and kill him,’ Mr Kevin said. 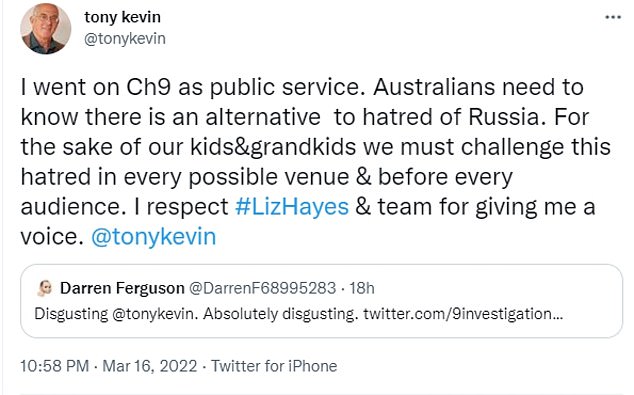 ‘Yet he has defanged them too in a way, by exposing their inability to protect the people from Russians.’

‘I went on Channel 9 as a public service,’ he said.

‘Australians need to know there’s an alternative to hatred of Russia.

‘For the sake of our kids and grandkids we must challenge this hatred in every possible venue and before every audience.’

The University of Western Australia appears to have distanced itself from him, with the Institute of Advanced Studies removing him from their website. 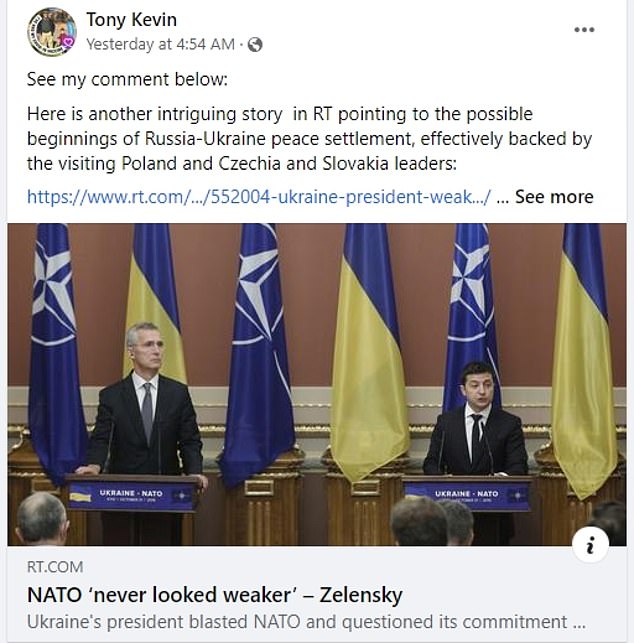