A drab former water bailiff’s 1960s home has undergone a stunning transformation into a luxury secluded hideaway that costs almost £4,000-a-week to rent.

A team of architects bought the waterside lookout near Penzance, Cornwall, which overlooks a reservoir in an area of outstanding natural beauty, for £350,000 in March last year.

The three-storey, three-bedroom copper-clad pad is the only dwelling overlooking the Drift Reservoir and it has now been given an eye-catching new lease of life after its new owners shelled out £200,000 on renovations. 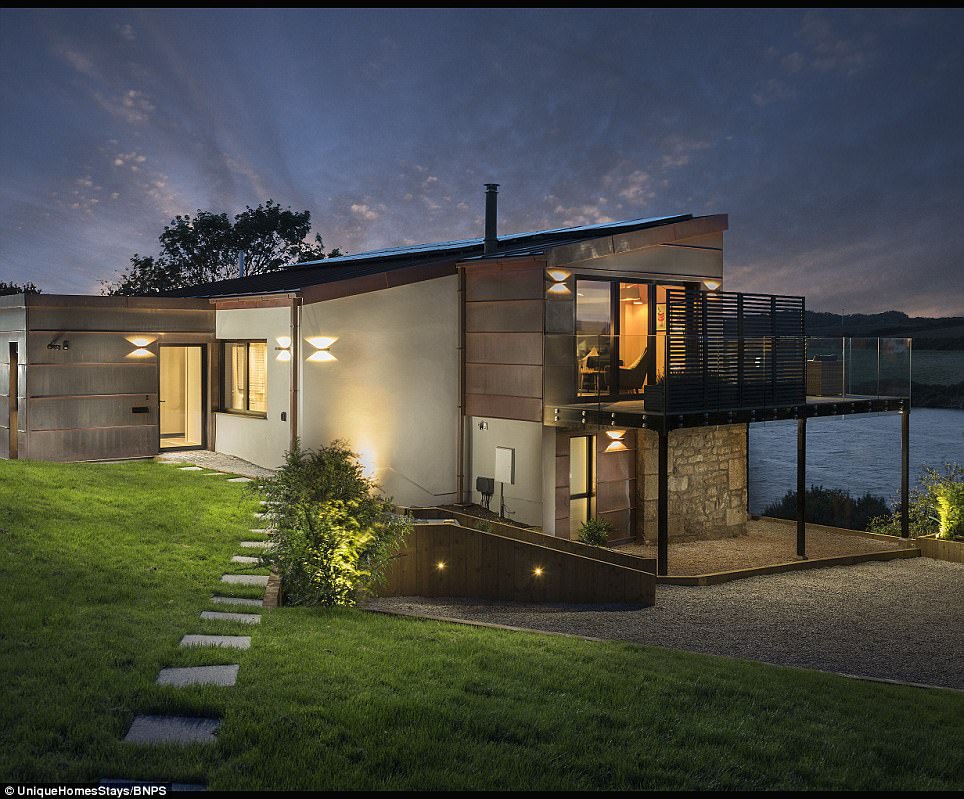 Before and after: The drab, beaten down property (left) is almost unrecognisable after a team of architects spent £200,000 on renovations (right) 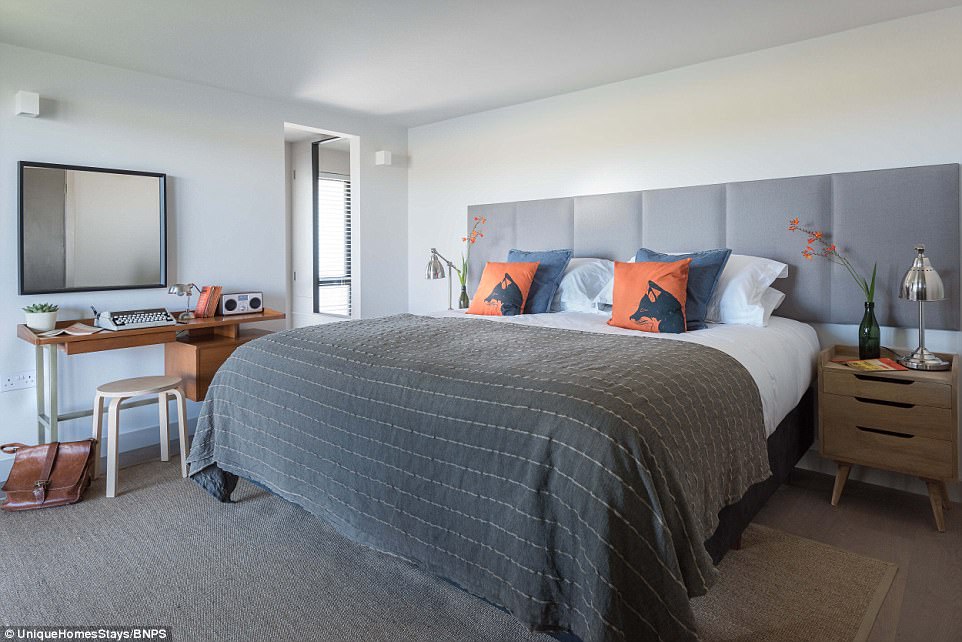 Luxury: Each bedroom (pictured) has a sun deck and there is a secret garden gate which opens out onto the waterside pathway

The property was originally built in 1961 alongside the Drift Dam and was developed by South West Water as living quarters for the manager of the dam and the reservoir.

The dam was constructed to flood the Drift valley and form a reservoir to supply water to west Cornwall.

However, when the dam was automated the house was sold off as a private dwelling and had fallen into disrepair before architects Mark Camillin and Liam Denny intervened.

They were inspired by Stephen King’s psychological thriller Misery – not for its dark plot but the idea of a writer sitting at a desk looking out across the lake.

The pair named the home Nevada because of its similarities to a Californian lake house and because the American state is home to the Hoover Dam and was the setting for Misery.

The upper level of Nevada is clad in copper while the rest of the home is made out of Cornish granite stone. 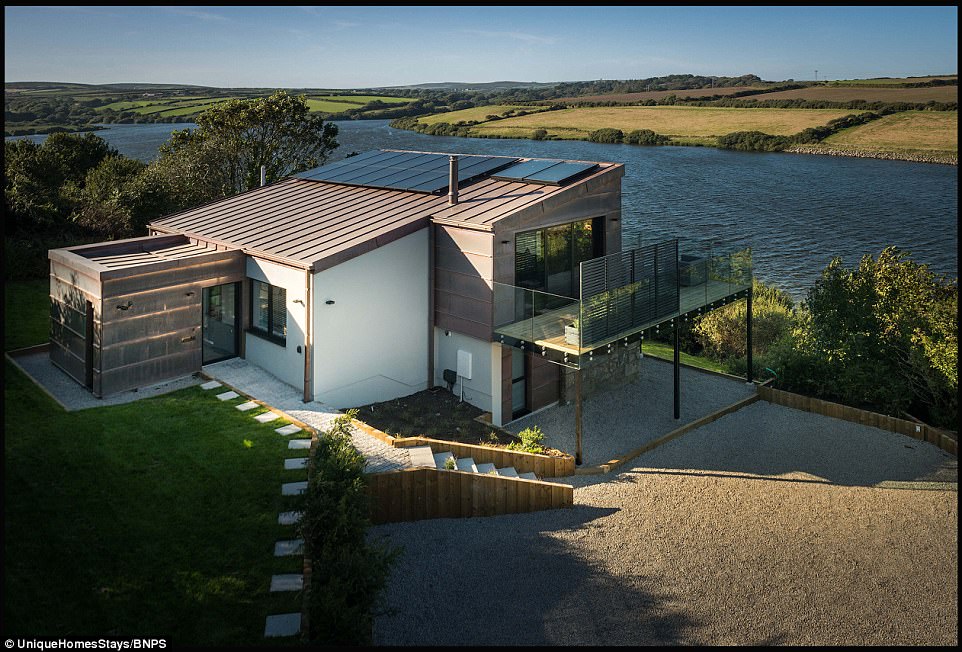 Picturesque: The three-storey home boasts stunning views of a reservoir near Penzance in Cornwall 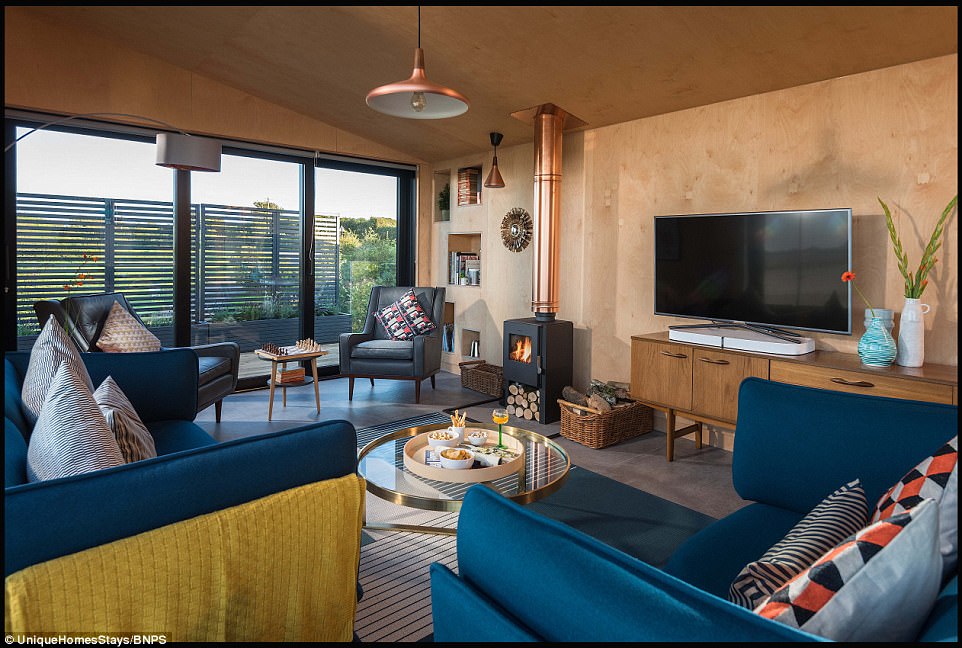 Makeover: The inside of the eco-friendly home (pictured) has been lined with plywood and there is a concrete tile floor 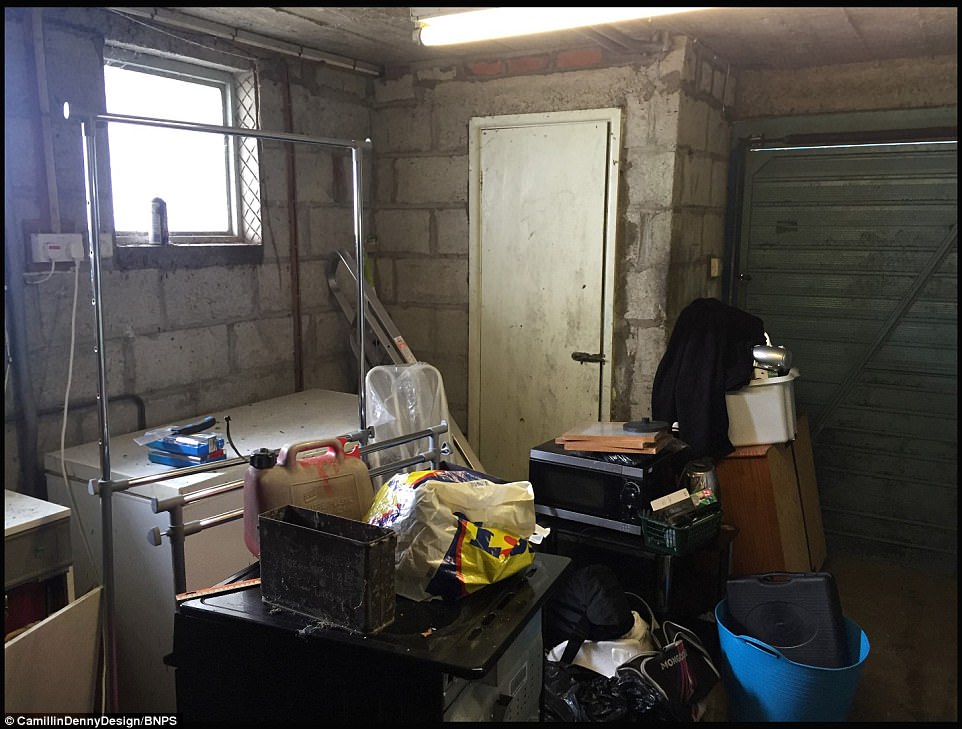 Dingy: Pictures show what the property before it underwent its transformation. Rubbish can be seen strewn around a room in the house

It sleeps up to six people in three bedrooms, with zip-and-link super kingsize beds, which can each be arranged as twin rooms.

Each bedroom has a sun deck and there is a secret garden gate which opens out onto the waterside pathway.

The inside of the eco-friendly home has been lined with plywood and there is a concrete tile floor.

The house is in an idyllic position, right by the water with nothing but fields on the bank opposite.

Mr Camillin said: ‘The exterior of the house is uncompromisingly modern – modernism from the 1960s with a feel of a Californian lake-side cabin.

‘We are really pleased with the 1960s feel of the interior.

‘We love the monopitch roof pointing towards the lake and the amazing views. 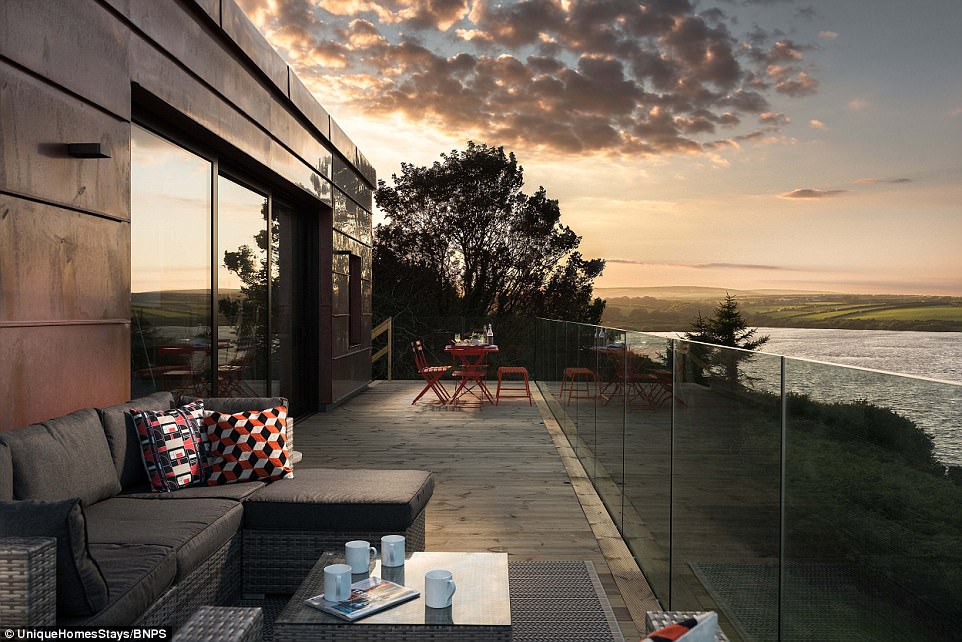 Views: The home has been named Nevada – because of its similarities to a Californian lake house and because the American state is home to the Hoover Dam 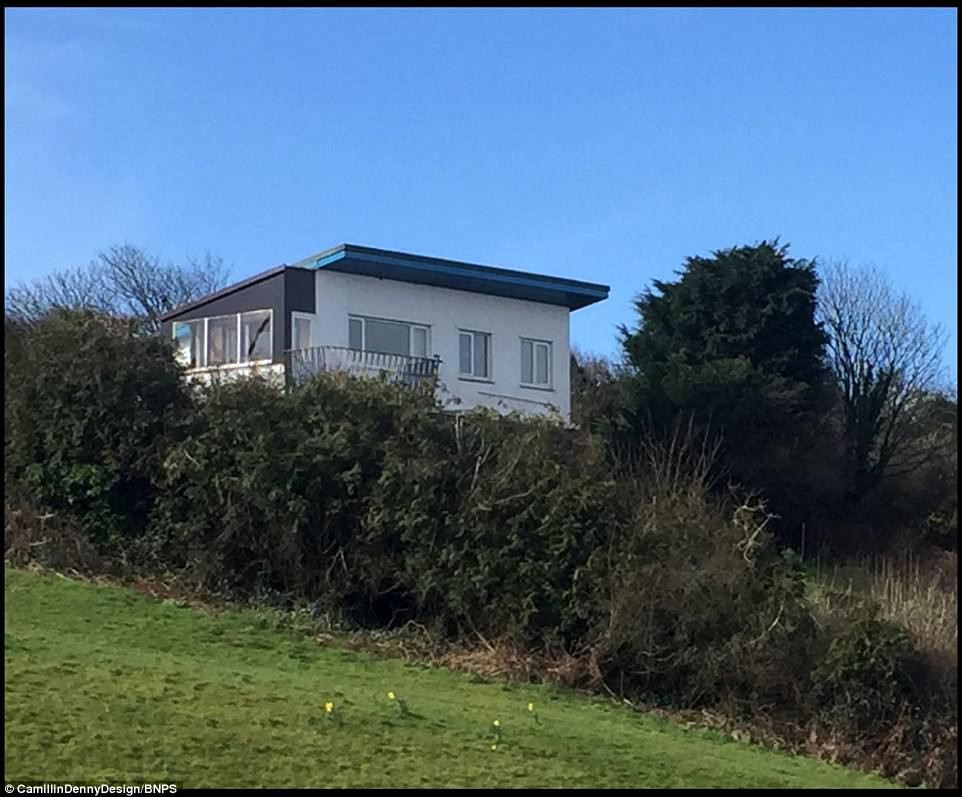 When the dam was automated the house (pictured before the makeover) was neglected. But now it has been restored to former glories 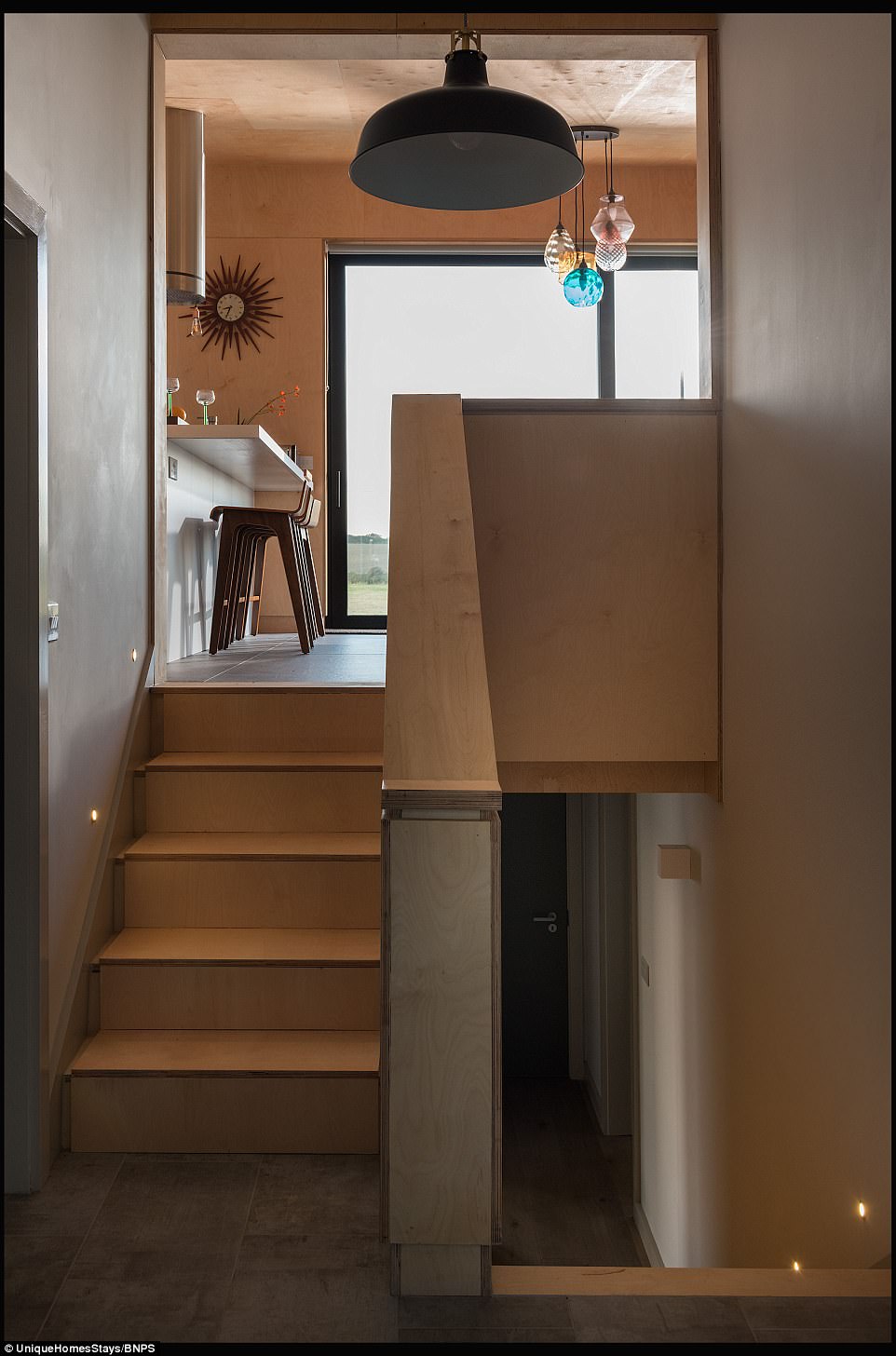 The property is available to rent and prices start from £995 for a three-day weekend in low season up to £3,480 for a week stay in peak season 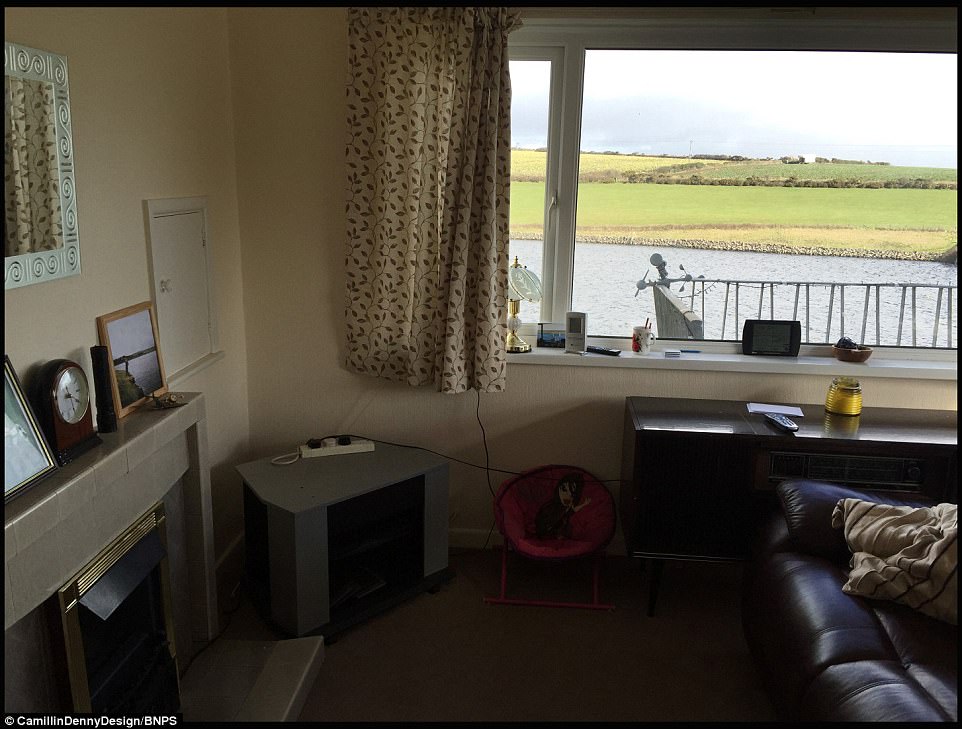 Uninspired: The three-storey, three-bedroom property before it was given a makeover

‘The inspiration was the film Misery, not for its dark thriller themes, but we liked the idea of a writer sat at a desk looking across at the lake.

‘We added to this the 1960s origins of the house and some luxury items.

‘The inspiration for the name Nevada was the film Misery which was filmed in Nevada, USA.

‘Nevada is also home to the Hoover Dam and the official colours of Nevada are blue and silver, which reflects the reservoir’s waters.

‘We think the location is unbeatable in Cornwall. It’s only up to a six-mile drive to pretty much everything in west Cornwall.’

The property is available to rent through Unique Home Stays who say it is perfect for families and multi-generational getaways.

It will also appeal to couples, with its secret garden gate which opens out onto the waterside pathway where couples can enjoy romantic moonlit folk.

Nevada is also likely to be a hit with anglers, who can hire a boat and enjoy the clear waters of the Drift Reservoir, which is stocked with rainbow and blue trout, and twitchers as there is a whole host of waterside birds including herons, swans, geese and Muscovy ducks.