Former BBC high flyer trained to be a ‘soul midwife’

A former BBC high flyer who felt like ‘death was following her’ after losing her husband and ex-partner within the space of 15 months has finally found peace after moving to Goa and training as a ‘soul midwife’.

Dee Delaney’s husband Tony, 41, died suddenly from a heart attack eight years ago after leaving their home in St Albans, Hertfordshire to take part in charity mountain climb, when their son was just two-years-old.

Fifteen months earlier, her ex-partner Martyn – the father of her daughter Millie, then 11 – committed suicide.

After Tony’s death, Dee went through a period of dating someone who was wrong for her and drinking too much, and even trained as a yoga teacher in the hope of finding some peace.

But it was only when she travelled to India where she studied Tibetan Buddhism that she was inspired to study as a ‘soul midwife’ with the am of becoming a ‘friend’ to the dying and helping them leave their physical body without fear.

Dee studied the different stages of the dying process, including how the dying person’s senses break down and their breathing changes.

‘I hadn’t been there for Tony’s death and in a way it helped me to know what would have happened to him at the point of death,’ she explained. ‘It was liberating.’

Dee’s book about her experiences is published next month, and she has started a new life in Goa with her son.

Dee Delaney, 48, from Hertfordshire with her husband Tony who died from a heart attack during a charity mountain climb almost eight years ago 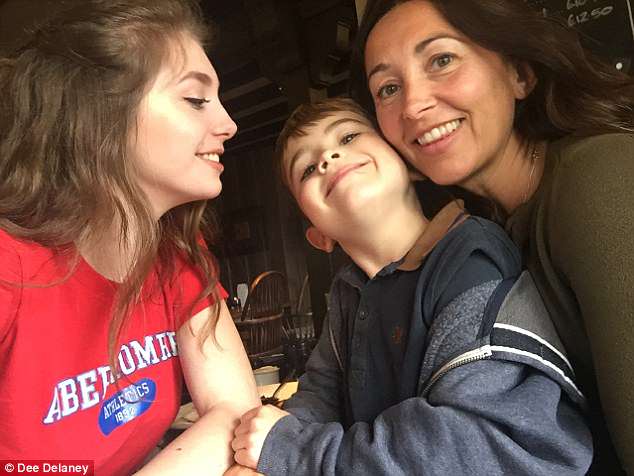 Dee now with her two children Fionn and Millie, whose fathers have both passed away 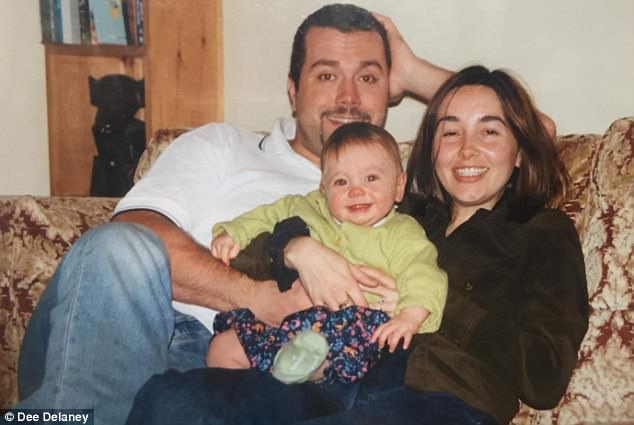 Dee with her ex-partner Martyn and their daughter Millie. He committed suicide, 15 months before her husband Tony died from a heart attack

On the day Tony died in June 2010 Dee sent him a final text, saying: ‘Take care up those mountains. I’m not ready to lose you just yet.’

Hours earlier, he had left to take part in the Three Peaks Challenge – the aim of which is to climb the highest peaks of England, Scotland and Wales within 24-hours – for charity.

The couple had argued the previous evening and spent the night in separate beds for the first time in their six-year marriage.

‘We rowed about mundane things such as the washing up and whose turn it was to clean the house,’ Dee recalled. 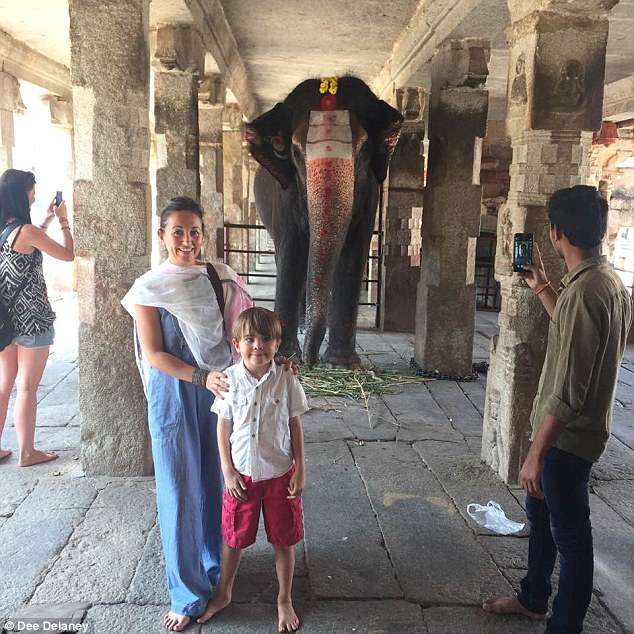 Despite the bad atmosphere, Dee couldn’t help noticing that Tony wasn’t his usual self. She saw him clutching the console table at the bottom of the stairs, as if he needed to get his balance.

The row was a rare down in a marriage that was otherwise full of ups.

The couple had good jobs – Dee was Head of Media Planning for BBC Radio and Tony worked in procurement for the global firm KPMG – and was the proud parents of Fionn, who was nearly two. They had also just finished renovating their dream house.

What is a soul midwife?

A soul midwife is a ‘friend’ to the dying who helps them leave their physical body without fear.

Dee studied the different stages of the dying process, including how the dying person’s senses break down and their breathing changes.

‘There are five stages to the dying process,’ Dee explained. ‘First the elements of the body – earth, water fire and air – break down.

The air stage is when the person takes their last breath. Finally, the soul midwife understands that there is a fifth stage, which involves the separation of the spirit and soul from the body.

‘The role of a soul midwife, or anyone who is sitting at the bedside of a dying person, is to create a sacred and healing space for them using sounds, oils, touch and meditation.

‘We sit in vigil with the dying person at each stage. For instance, at the fire state it’s common for people to become agitated and display uncharacteristic behaviour, such as yelling out using ‘colourful’ language and calling for help, as they think someone is trying to harm them.

I learned a simple technique to help them relax. First you take hold of their right hand and lock your thumb with theirs so that your palms touch. Then you gently rotate their hand clockwise while maintaining eye contact.

‘During the water stage, the person might become emotional, so it’s important to lend a listening ear at this time and provide comfort.

‘In the West, people can be very frightened of death, but the soul midwife understands that there is no need to be afraid of it.

‘We are in tune with the natural stages of the dying process and we help the dying person let go and their families and loved ones let go of them. Our aim is for them to have a good death, and that means there has to be an element of acceptance.

‘Towards the end, many dying people will acknowledge that they are about to die and their relatives will often go into denial, telling them that they will pull through. However, it’s important that the person is allowed to let go.

‘As well as offering spiritual guidance, a soul midwife can also help with the practical aspects of dying, helping the dying person to come up with a plan for leaving the world as a midwife might help an expectant mother come up with a birth plan.’

‘Tony had said to his dad that it was his time now to get on and live,’ Dee said. ‘He’d just been promoted at work and the house had been taking up most of his spare time.’

Tragically, Tony didn’t get to enjoy the fruits of his labour. The day after he left for the walk, on Saturday 26th June 2010, Dee heard a knock at the door. When she opened it and saw two police officers, she instinctively knew why they were there.

‘I said to them, “It’s Tony, isn’t it?”,’ she recalled. ‘I refused to let them in because I knew they were about to shatter my world. When they saw Fionn playing in the corridor behind me I could see in their faces that they felt crushed by the news they had been sent to deliver.’ 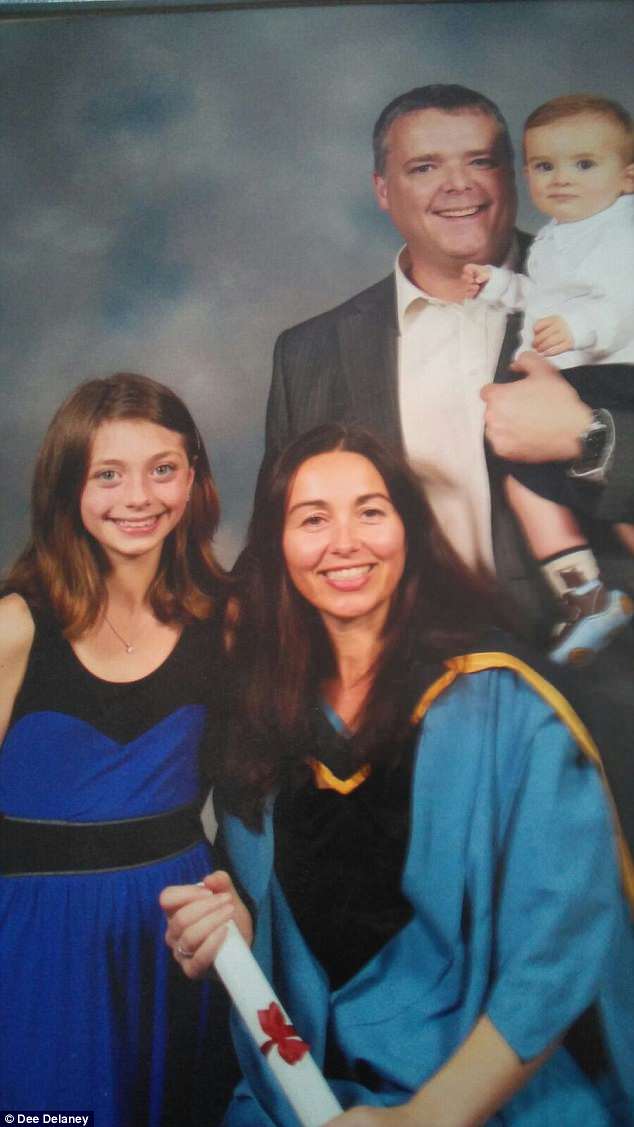 Dee with her family: She and Tony had argued the night before he died and slept in separate beds for the first time in their six-year marriage, which she now believes was a type of premonition

It transpired that Tony had collapsed from a heart attack and died just an hour into the walk, despite being worked on by two coronary specialists who by coincidence were taking part in the challenge, too.

A coroner later confirmed that Tony had been suffering from Coronary Heart Disease and that his arteries had been 95 per cent occluded at the time of his death.

‘I was told his early death was part lifestyle and part genetics,’ Dee explains. ‘He didn’t smoke and had never taken drugs, but he was a typical burly bloke who liked to go to the pub. He enjoyed his food and carried a bit of weight around the middle, but nothing that would really make you worry.’

Both Tony’s father and his brother had suffered heart attacks around the same age, but had survived. 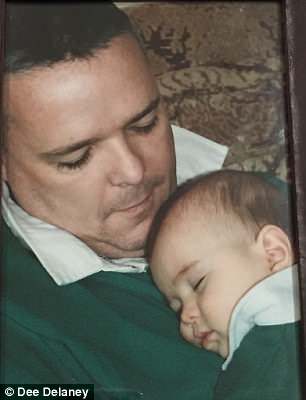 The news that Tony was never coming home plunged Dee into a dark hole of grief that took her years to emerge from and it wasn’t her only experience of bereavement.

Just 15-months earlier, her former partner Martyn, with whom Dee had a daughter Millie, then 11, had taken his own life. Dee had to break the news to her daughter on Mother’s Day.

Following Tony’s passing, she felt that somehow death was following her around, but she tried her best to carry on as normal.

‘At first I went into survival mode,’ she explains. ‘Everyone remarked how well I was coping. I concentrated on doing the right thing for Tony and threw myself into organising his funeral and making sure he got the send off he deserved.’

The BBC told Dee to take off as much time as she needed but she returned after just two months.

‘Between nine and five I could almost be normal again,’ Dee says. ‘I didn’t have to sit alone with the pain.’ 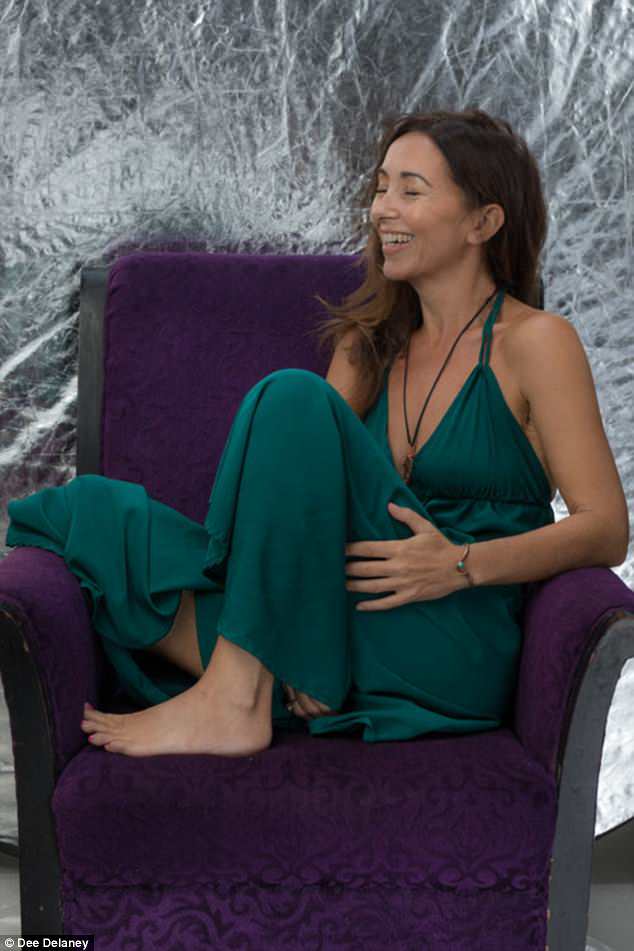 More heartache was in store when, eight months on, Fionn was diagnosed with cerebral palsy.

Dee went through this entire period without turning to antidepressant, but her husband’s untimely death forced her to reassess her entire way of life.

‘In a way the second year was even worse than the first,’ she said. ‘I expected to feel awful and cry all the time for the first one, but by year two I thought I’d be starting to feel better.

‘By the end of that year I adopted the attitude of “life is too short” and became determined to find love again. That led to me dating someone who was wrong for me and drinking way too much.’ 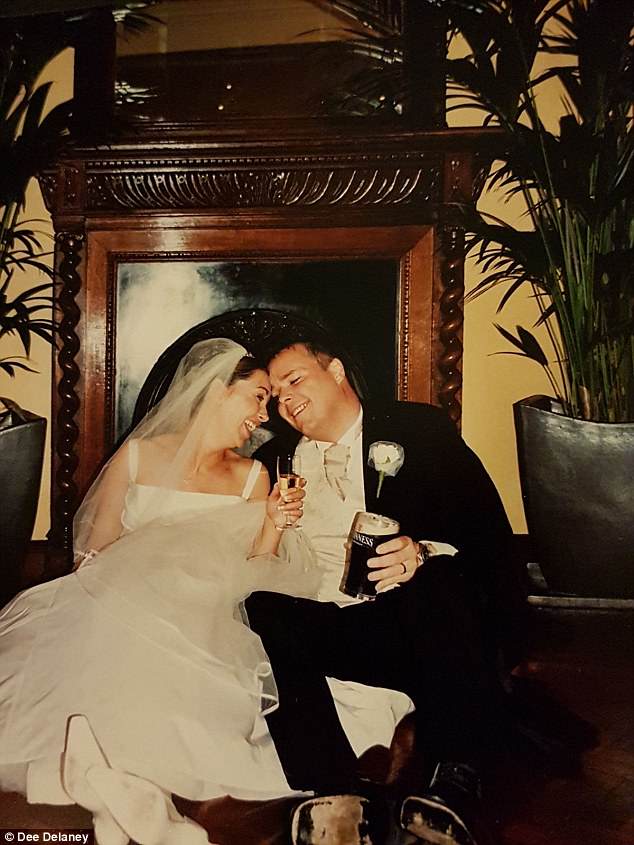 Dee and Tony on their wedding day: The mother-of-two had already lost her ex-partner, the father of her daughter, just a year before Tony died

After being made redundant from work, Dee decided to take a more spiritual path and retrained as a yoga teacher. But she still felt out of whack.

‘The pendulum had swung in the opposite direction,’ she says. ‘I’d gone from living the corporate, materialistic life to centering everything round spirituality. I needed to find a balance.’

This reassessing continued when Dee travelled to India and confronted the thing that had loomed so large in her life. She studied Tibetan Buddhism and the idea that rather than being ‘the end’, death is merely a transition point to the next life – and one that you can prepare for in this one.

Back in the UK, she signed up to a Soul Midwifery course in Dorset, which finally helped her to come to terms with what happened to Tony. 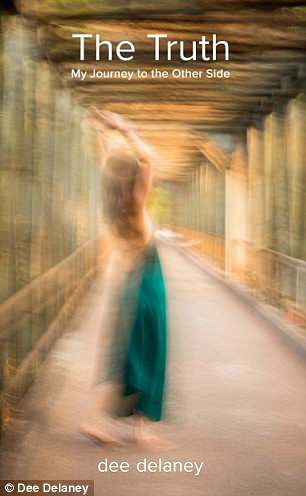 Dee’s book The Truth is published next month

She now believes that the fear she felt before Tony left for his charity walk and the argument they had was a type of premonition about what was about to happen.

‘It’s common for people to withdraw before they die,’ Dee said, ‘and that’s what Tony did. He wouldn’t even let me drive him to the train station the following morning. He took a taxi instead.’

Shortly after attending the course, Dee rented out her house in St Albans, finally letting go of the life she shared with Tony, and relocated with Fionn to Goa.

She has also written a book called The Truth: My journey to the other side, which chronicles her experiences with grief and death, and she is planning to bring out two more.

The Truth is published by Garnet Press and is due for publication in May. For more information about her work, see www.deedelaney.co.uk