The man who voiced the BBC’s first ever news bulletin in 1954 has died aged 93.

Former newsreader Richard Baker was one of the BBC’s best known personalities, fronting shows such Last Night of the Proms as well as presenting both Radio 2 and Radio 4.

Baker’s son James said his father died this morning at the John Radcliffe Hospital in Oxford.

Baker was born in 1954 and was the son of a plasterer. He had studied at Cambridge University, however his time there was interrupted by World War Two and Baker went off to serve on a minesweeper with the Royal Naval Volunteer Reserve during the conflict, attached to the supply convoys to Russia.

A keen amateur dramatist, Baker resumed his education after the war and joined the BBC in 1950 as a radio presenter. 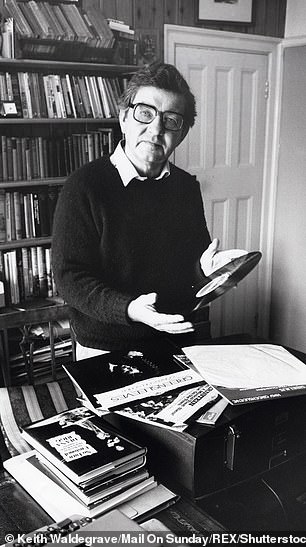 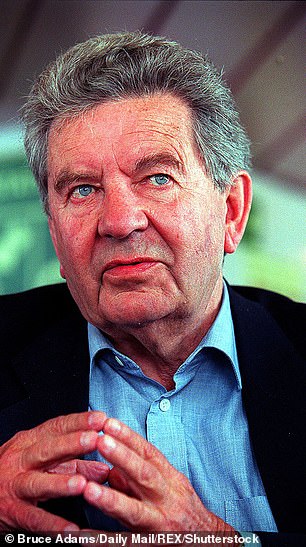 Richard Baker going through his record collection at his home in Radlett Hertfordshire (left). The newsreader had also written a book and had promoted his work (right) 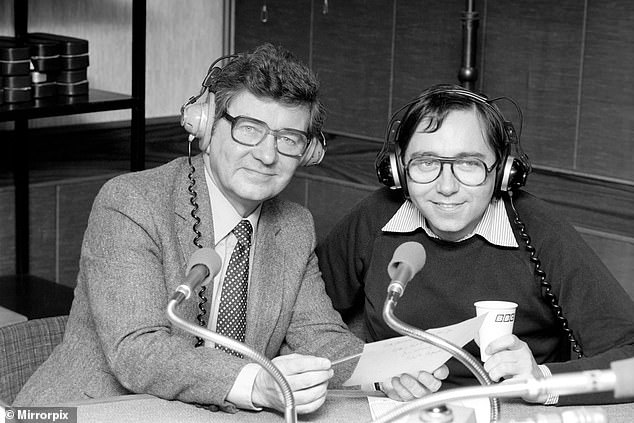 Richard Baker (left) with London Cabbie ‘Mastermind’ Fred Housego, who had been a ‘Start the Week’ presenter on BBC Radio 4

He was also a keen author and following his career as a newsreader he had penned a book titled ‘The Teror of Tobermony’, and had travelled to the Isle of Man to promote it.

He said: ‘Richard Baker, who has just died, was one of the finest newsreaders of modern times: highly intelligent, thoughtful, gentle, yet tough in defence of his principles.’ 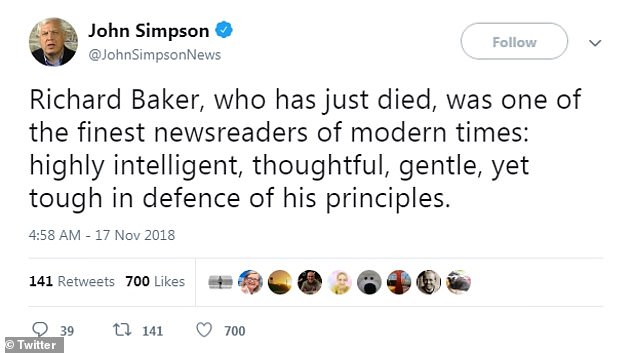 This is while ITN’s Alastair Stewart said that Baker had been a ‘giant not a journalist’.

His tribute read: ‘A giant. Not a ‘journalist’, but that wasn’t the style in his day. Burnet, Day, Gall et al came along and changed all that. Richard ‘Dickie’ Baker was also a master of the arts, especially music about which he wrote beautifully. A true gentleman. #RIP’

The BBC’s Middle East editor Jeremy Bowen also described him as a ‘legend’. 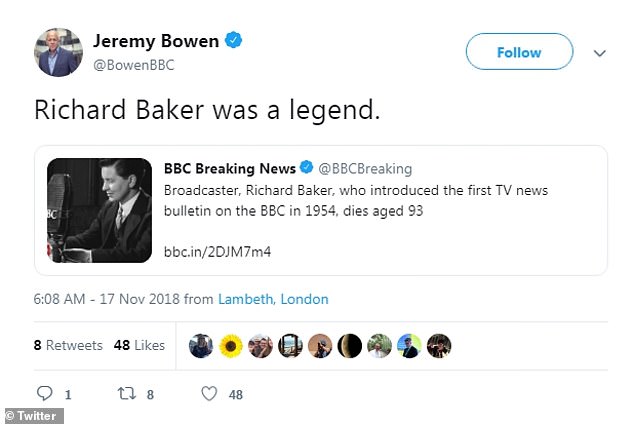 The BBC’s Jeremy Bowen, who is the Middle East editor described Richard Baker as a ‘legend’

Richard Baker was was born in Willesden, north London, on 15 June 1925. His father, who was a plasterer had been a keen amateur singer who encouraged his son to take up the piano.

Later on in life Baker won a place at a grammar school before going to Peterhouse College, Cambridge, where he would read history and modern languages.

He was pulled away from his studies to fight in World War Two, but when he returned he became an enthusiastic member of the Marlowe drama society. 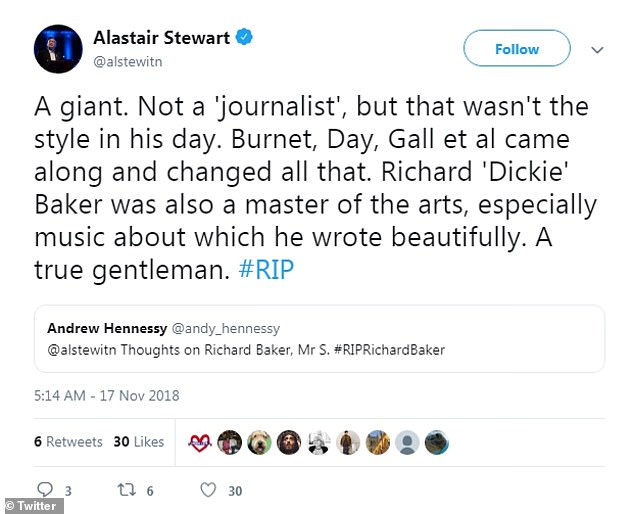 One he had graduated from Cambridge  he began acting in various repertory companies and secured work as an English teacher in a London grammar school.

However it wasn’t until 1950 that Baker managed to scoop a dream job. He had wrote to the BBC asking if they were in the process of recruiting actors.

This resulted in an offer of a job as a presenter on what was then called the Third Programme. It eventually became Radio 3 and it was a perfect job for a man so interested in classical music.

In 1957 Baker became a regular face on the news and has remained a household name ever since.