Former bodybuilder, 23, addicted to steroids for THREE YEARS begs others to kick their habit

A former bodybuilder who became addicted to steroids for three years is warning others to kick the habit before they hick rock bottom.

Jack Baldwin, 23, used so-called image and performance-enhancing drugs (IPEDs) from the age of 17, before his family pleaded with him to get medical help.

At his lowest point, he said he was ‘mentally and emotionally addicted’ to steroids – which he initially saw as a supplement.

He lost his sex drive and suffered severe mood swings, obsessed with the promise of ‘looking good’ and being able to lift heavier weights.

It took a year of counselling for him to leave the drugs behind, and now wants to encourage others to do the same.

Jack Baldwin, 23, of Hull was addicted to so-called image and performance-enhancing drugs (IPEDs) for three years from the age of 17 before his family pleaded with him to get medical help. He now warns others to kick the habit before the reach the mental lows he did 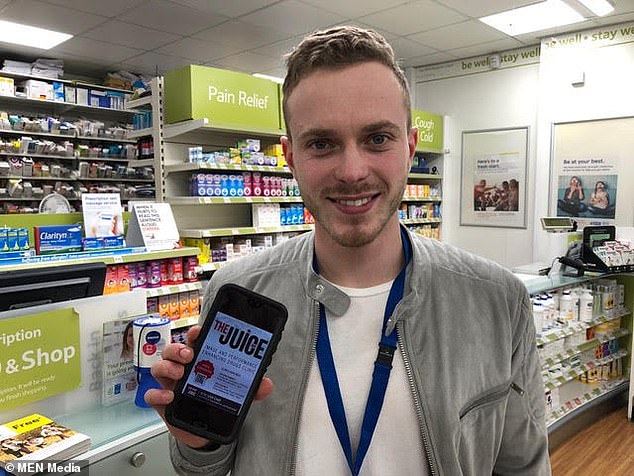 Mr Baldwin is now a peer mentor at The Juice Bar, a free and confidential advice project run by the Hull-based Alcohol and Drug Service (ADS) where he had counselling for a year

Mr Baldwin said: ‘There is so much more to enjoy in life – family, friends, work, relationships.

‘All things no young man should forgo because they want to be able to lift the heaviest weights in the gym.’

Once he started going to the gym, Mr Baldwin became hooked on the idea of getting bigger.

He said: ‘I started taking steroids when I was age 17. I wanted to get bigger and thought steroids were the answer.

HOW DO STEROIDS WORK?

The term ‘anabolic’ refers to muscle-building whilst ‘androgenic’ refers to increased male sexual characteristics; ‘steroids’ refer to the class of drug.

Male hormones such as testosterone and its metabolite di-hydrotestosterone are responsible for the developmental changes that occur within the male body through adolescence such as increased body mass, facial and body hair, oily skin, acne and mood swings.

Whether AAS are injected or taken orally they work by mimicking testosterone.

When they enter the blood stream they attach to specific receptors at cell level.

This allows them to enter the nucleus of the cell, which in turn helps the cell to create and retain more protein.

This process is called protein synthesis. It is this construction of new proteins that is associated with increased muscle size and strength.

They may also stop the body entering a catabolic state where muscle would be broken down and size diminishes.

‘They were easy to get hold of and users around me gave me advice. I just saw steroids as a supplement which would improve my physique.

‘At the time, I didn’t realise this was feeding my obsession.’

But looking in the mirror, his toned muscles were never enough, and he kept going back to IEPDs.

He said: ‘I set goals to achieve a certain size and when I achieved it, it wasn’t enough. I wanted to be bigger every time.

‘I used for approximately three years and experienced severe mood swings and loss of my libido. It wasn’t until my grandparents talked to me and said that I wasn’t myself.

‘They were worried about my moods and thought that my physique was a concern but in my head I was looking good.’

Mr Baldwin said his family tried a ‘soft approach’, but eventually they were begging for him to see someone.

He said: ‘My family pleaded with me to get help. I absolutely didn’t want to but went along to my doctor to appease them.

‘My doctor acknowledged that I had an issue with the drugs I was taking and recommended counselling.’

Every week, Mr Baldwin met a team at The Juice Bar, a free and confidential advice project run by the Hull-based Alcohol and Drug Service (ADS) in Spring Bank, and spoke regularly on the phone with them.

‘I had over a year of counselling and even after this time, I still wanted to use because I hated getting smaller,’ he said.

‘The psychological pull of steroids is very strong.

‘I was mentally and emotionally addicted, all because of my appearance.’

Eventually the counselling sessions paid off and, now, Mr Baldwin acts as a peer mentor for The Juice Bar himself.

He said: ‘The mental battle with appearance is the main reason I have become a peer mentor for ADS. I want to help people like me, who are trapped. 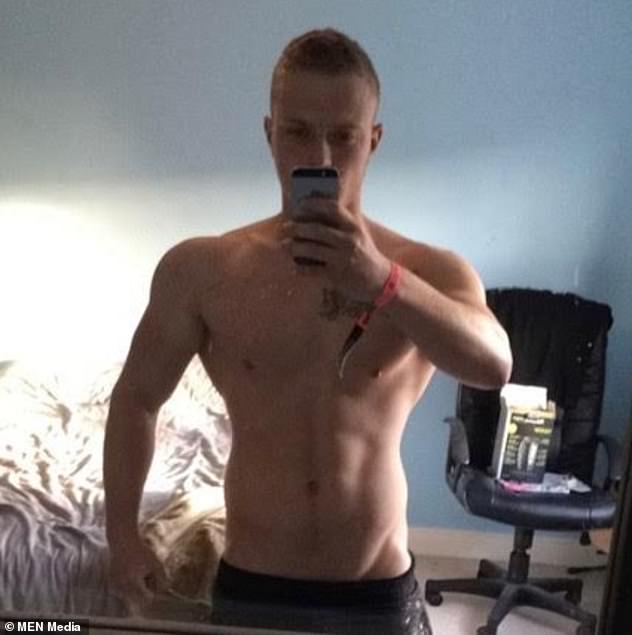 Mr Baldwin said he was ‘mentally and emotionally’ to the drug that improved his physique. His libido decreased and he suffered mood swings as a result

‘I am so grateful to the team for their support. They have helped to turn my life around.

‘I have continued with my gym training throughout my recovery and although my size has reduced, I feel fitter and healthier than ever before.

‘To anyone using, I want to say that steroids and other IPEDs are damaging your health.

‘No matter what you think at the time, they can cause serious problems which not only affect you but the people around you, who love you.’

Steroids are taken to increase muscle mass and athletic performance, but classed as a category C drug, they can only be sold by pharmacists to someone with a prescription for a medical condition such as muscle wastage.

It is illegal to import or possess the drugs, if it is believed you are going to sell them. The penalty can be a heavy fine or even prison time.

Steroids are the only drug in the UK to have seen a staggering increasing of use. An extra 19,000 young people had taken the drug in the year 2016-2017, official data shows.

People of all ages have been known to misuse these drugs, including adolescent boys who suffer from body dysmorphic disorder.

Anabolic steroids are addictive, according to the NHS. However, drug charity FRANK says users of IPEDs are not believed to become physically dependent but may become hooked on the way the drugs make them look and feel.

Project manager at The Juice Bar, run by the ADS and the Humber Teaching NHS Foundation Trust, Paul Martindale said: ‘People don’t take IPEDs for an immediate euphoria, instead it’s the desire to change image and improve performance that drives use.

‘The downside is that users often become fixated on their appearance and feel bigger is never enough.

‘The effects of using IPEDs can be anything from skin conditions such as acne to severe paranoia, and physiological issues including liver and heart failure and in some cases blood viruses contracted from sharing needles and other injecting equipment.

‘Many believe these drugs are supporting a healthy lifestyle and with little official help and support, turn to the Internet for advice which does not always prove to be accurate.’