A dying British Army veteran facing trial over the fatal shooting of an IRA suspect more than 40 years ago has condemned his prosecution as a ‘betrayal’.

Dennis Hutchings, 76, will stand trial over the death of 27-year-old John Pat Cunningham at the height of the Troubles in Northern Ireland in 1974.

Mr Hutchings, of Cawsand, Cornwall, who is seriously ill and has been told he has just a year left to live, served 26 years in the Life Guards with distinction.

But the great-grandfather was charged with attempted murder after the killing was re-examined by police.

The victim is claimed to have had the mental age of a child between six and ten, and a fear of men in uniform.

He was said to have been running away from an Army patrol when he was shot in the back close to Benburb, a village on the border between Armagh and Tyrone.

Mr Hutchings was prosecuted in connection with the shooting following an investigation into the death in 2013. 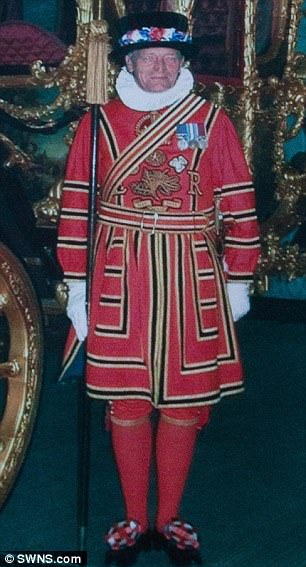 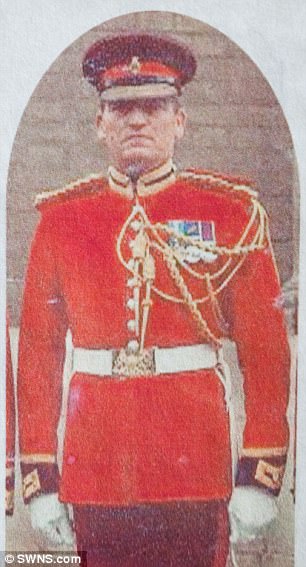 Mr Hutchings (pictured, left, in 1990 at the Royal Windsor Horse Show; and, right, in 1968 while he attended a funeral) served 26 years in the Life Guards with distinction

It is alleged that he and another soldier both fired their guns but it is not known who fired the fatal bullet.

A previous court heard was told that the second soldier – referred to only as ‘Soldier B’ – fired two shots during the incident but is now dead.

Mr Hutchings was in charge of the Army patrol on the day Mr Cunningham was shot.

He is charged with one count of attempted murder and one of attempted GBH but described the action being taken against him as a ‘shambles’.

He said: ‘They call it Troubles. It was a war zone. You went out on patrol. You could not say 100 per cent “I’ll be coming back after this”. 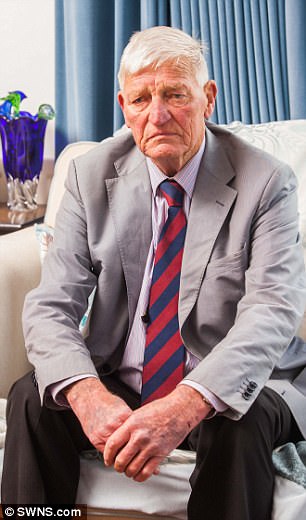 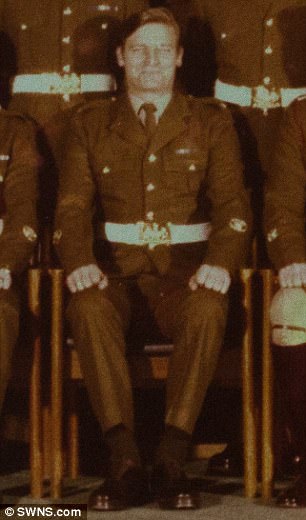 The great-grandfather (left; and right, in 1978 with other warrant officers) was charged with attempted murder after the killing was re-examined

‘I think [the prosecution] is an absolute shambles. It just shows how spineless our politicians are. They send you out there to do the job. 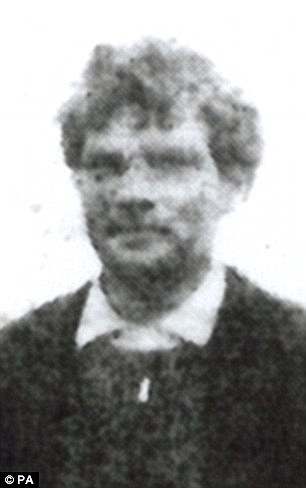 John Pat Cunningham, 27, died at the height of the Troubles in Northern Ireland in 1974

‘They give you the paperwork to tell you how to do it and totally ignore you once it’s finished.’

The family of Mr Cunningham said they want ‘some clarification’ of what happened.

He was shot dead in a field in Carrickaness Road as he ran away from soldiers who stopped their Land Rover in the area and followed him.

There were more than 3,200 unsolved killings during the Troubles.

But back in 1975 Mr Hutchings was told there would be no further action over Mr Cunningham’s death.

Mr Cunningham’s nephew, Charlie Agnew, said the family had not had an explanation of what happened in more than 40 years.

He said: ‘The impact on the family has been massive. John Pat had a mental illness, he was a vulnerable adult. It’s weighed very heavily on my mother who is now 83.’

Mr Hutchings is expecting to stand trial in Belfast next year.

In June 1974, Dennis Hutchings was leading a patrol of four soldiers in Eglish, County Tyrone, when they came across an IRA unit moving firearms and explosives ahead of an attack.

Two days later, the troops carried out a search of the area in a bid to track down the missing Republicans and came across Mr Cunningham, who they believed was an armed IRA suspect, near the village of Benburb.

As he ran away across a field some members of the patrol opened fire, killing him. It later emerged that the victim was an innocent member of the public who had the mental age of a child between six and ten.

After a Royal Ulster Constabulary probe at the time, the soldiers were told they would face no further action.

But in 2011, Mr Hutchings was traced by Northern Ireland’s Historical Enquiries Team which was reviewing the shooting.

The other two troops present on the day are dead. The Government apologised for the death in 2013.

But when the HET handed over the report in 2013, the PSNI’s legacy investigation branch re-opened the case following a re-examination of the evidence.

Even though there is no forensic evidence, no weapons from the time and all the witness are dead, Mr Hutchings was charged with attempted murder – despite Mr Cunningham being killed.