Penny Hughes has been a trailblazer for women in business throughout her career. In 1992, aged only 32, she was appointed president of Coca-Cola’s operations in Great Britain and Ireland.

Three years later, she quit to have the first of her two sons, making headlines in the process.

Rather than sacrificing her career on the altar of motherhood, however, she accumulated an impressive portfolio of directorships.

Over the ensuing years, she graced the boardrooms of Morrisons, Next, Vodafone, Reuters and Body Shop, along with a couple of much more trickier propositions.

Three decades on, she has matured from a female prodigy into an elder stateswoman.

Her latest role is chairman of Riverstone, a posh retirement property developer selling multi-million pound flats to well-heeled over-65s, in swish areas of London. The venture is backed by Goldman Sachs.

Undoubtedly there is a gap in the market for retirement accommodation for older people who find a large family property hard to manage but are not yet ready for a care home.

Riverstone is unapologetically at the top end, with two sites in London – one in Kensington and one in Fulham – where apartments cost between £900,000 and £6m. Eventually, the plan is for ten sites in the capital.

‘We think the majority of our residents will come from a five-mile radius of the two residences,’ says Hughes.

‘They know the local area already, they enjoy it, they’ve got places they want to keep on visiting, whether it be the Royal Albert Hall or the Chelsea Flower Show.’

Does she have any thoughts on how the remaining 99 per cent of over-65s might solve their housing needs?

‘So of course we’re at the higher end, but we do expect a sort of trickle-down and there are other operators which provide retirement living to a different sort of audience. We’re providing a choice that isn’t available today.’

It is certainly not your typical granny flat – let’s just say Riverstone is in the plutocrat pensioner zone.

This is no place for anyone who wants to grow old in comfy carpet-slippers and give their grandkids fondant fancies for tea.

No. It’s pitched at the kind of couple who have aged with a silver sheen of wealth and who you can imagine tripping along the beach in those pensions ads on an expensive holiday.

Entering the show apartment in Kensington through a huge, solid door – which incidentally allows easy passage for a wheelchair – and black pomegranate fragrance wafts out.

The adaptations for a mature resident – no trip hazards, easy-opening kitchen cupboards, accessible bathroom and the like – are ultra-discreet.

Surfaces gleam, carpets are deep, the decor is cool. Of course, retiring in this sort of style comes at a cost.

On top of the purchase price, there will be a service charge, currently set at around £16,000 to £17,000 a year, fixed for the duration of ownership. 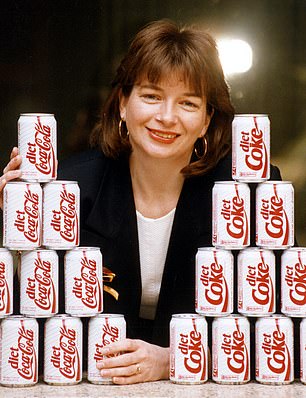 Drinking to success: Penny Hughes was president of Coca-Cola in GB and Ireland

Then there is the exit fee – Riverstone prefers the term ‘deferred management charge’ – which is 4 per cent per year of ownership, capped at seven years or 28 per cent. The idea is that the developments will feel like an exclusive members’ club, with amenities such as a spa, swimming pool, herb beds designed by garden guru Jekka McVicar, a restaurant and cinema.

Hughes, 62, is a bit too young to move in herself, though she says she would ‘love it’.

She is married to David, who she met at university in Sheffield, where she gained a first in chemistry.

He gave up work when she was pregnant, an unusual arrangement then and now.

Their two sons, Alex and Robbie, are in their twenties.

Does she think things have improved for women in business since the early 1990s?

‘Undoubtedly. I used to often be the only woman in the room and now that happens only rarely. Has it gone far enough? Of course not. But I’m an optimist.

Why did she feel she wouldn’t have been able to combine her career at Coca-Cola with motherhood?

‘Well, it was for multiple reasons. Yes, I was pregnant and we wanted a family. But if I had taken on the next role, I would have been corporate property.’ She says she would have been expected to go to the US in order to climb the ladder, adding: ‘I didn’t feel able to sign up for that sort of corporate journey – it was a combination of both career and family reasons.’

In the past, Hughes has revealed Margaret Thatcher was the woman who most inspired her.

Now, however, she says she learned about ‘profit with principles’ from the late Anita Roddick at The Body Shop, where she became an independent director after leaving Coca-Cola.

‘Anita’s outlook was that we need to make a profit in order to stay in business, but that looking after the communities in which we trade with is the right thing to do.

‘I remember going to Kathmandu with her and she had that sparkle and could communicate with anyone.’

Among the tougher directorships Hughes took on was Royal Bank of Scotland, where she was in the thick of a long-running row over the pay of then boss Stephen Hester. 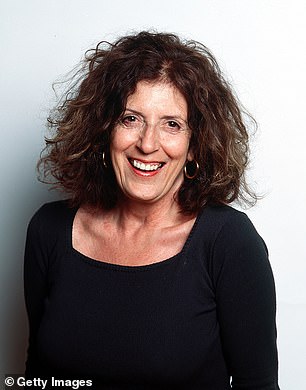 Doing the right thing: Penny Hughes says she learned about ‘profit with principles’ from the late Anita Roddick (pictured)

He was heavily criticised for his rewards as boss of a bank that was bailed out at taxpayer expense. Many felt he should have approached the role as a public service, not a money-making opportunity. As chair of the pay committee, she was slammed for failing to keep his pay in check.

‘We took the balance sheet down from £2trillion to £500billion, that’s not public service work,’ she replies, crisply.

More recently, Hughes was the chairman of Aston Martin for its stock market float, which turned out to be one of the worst-performing on the London market in decades. Shares in the luxury car maker fell by 75 per cent after the listing and remained in the doldrums.

Unsurprisingly, it is a job she says she would never have taken in hindsight.

She segued into the role at Riverstone after chairing iQSA, one of the UK’s largest providers of student accommodation, which was also backed by Goldman Sachs. The business was bought last year for £4.7billion by US private equity group Blackstone.

Hughes believes the broader picture behind the Riverstone developments is that in the UK ‘there is inadequate housing for later living.’

‘This model is well developed in New Zealand, Australia and the USA, where there is now legislation to protect both the resident and the developer.

‘That’s not yet in place in the UK, but it’s something that we would welcome.’

What about the risks in this kind of housing, though? The apartments are on 150-year leaseholds, but what if Riverstone at some future point sells the freehold?

This has caused significant problems in the past when leaseholders have been hit with high and rising charges. ‘It doesn’t make sense for us to do that, but they would have protection under their lease,’ she says.

And what if people become medically unable to cope, or fall into financial hardship? Won’t it be terribly difficult to have to ask elderly residents to move out?

Potential buyers have a compulsory medical before they purchase and can pay for care. ‘We are not trying to screen people out, it is to help us understand their needs,’ she says.

As for money worries, Hughes says: ‘Obviously we are dealing with high net worth people.

‘I’m sure that we’ll be able to manage hardship cases but we’re not anticipating that that will be a frequent occurrence.’

She points out that fewer than 1 per cent of homes being built nationwide are for retirement living.

‘That is not enough. We want government to adopt a policy, which would include an allocation of new houses built for later living, maybe five to ten per cent.

‘Within 20 years, one in four of us is going to be over 65, so I could argue for a much higher number. But we have to start somewhere.’