A former college football player suffering mood swings, depression and memory loss believes he has the degenerative brain condition CTE after 15 years of blows to the head left him with countless concussions.

Drew Bouché, 38, said the game that he loves and grew up with has given him chronic traumatic encephalopathy (CTE), the disease that has crippled the brains of hundreds of former NFL players and lead dozens to commit suicide.

The graphic designer from Wisconsin told Daily Mail Online that he is now focused on therapy to deal with his symptoms and struggles with the idea of letting his 11-year-old son play the game.

Extensive research has shown the damaging effects the condition can have on the brain in professional football players, however the game’s impact on players at the high school and college levels has been less explored. 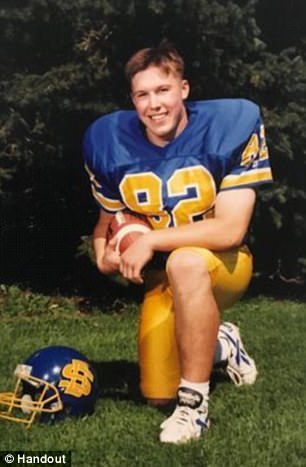 Drew Bouché has battled with depression and mood swings since his college football career ended from a blow to the head his freshman year.

The former wide receiver said he does not remember, but from what he was told he suffered a knee to the head during practice and wobbled off the field.

‘I thought I was knocked out because all I remember was coming back to consciousness on the sideline, but everyone told me I was awake and talking,’ he said.

After a career filled with concussions that rattled his brain, Drew made the decision to leave the sport because ‘it just wasn’t worth it’.

Since then he has suffered two seizures, suffers daily migraines and has had mood swings that have affected his professional and personal relationships.

Bouts of depression have also led him to alcoholism.

‘I’m not the same person I was in my youth,’ Drew said. ‘I was vivacious, really excitable and a goofy person. Though I may still be like that sometimes I’m very much an introvert and have social anxiety.’

He added that he will walk into a room and forget what he’s doing or why he came there, ‘things that people deal with in older age.’

Drew was born into a football family with his dad as his high school coach and said he has played the game ever since he can remember with his brothers and cousins.

He started with no-contact flag football at eight years old then began tackling at 12 years old, playing until his freshman year of college.

In his entire career Drew said: ‘I couldn’t even count how many times I’d see stars from pee-wee to college.’

He added that by his senior year of high school he ‘saw stars’ every single game.

In high school and college he experienced eight concussions that were high-grade where he lost consciousness and experienced symptoms for at least a day.

He said as a running back and wide receiver he tended to lead with his head, a technique that is now not allowed in football. 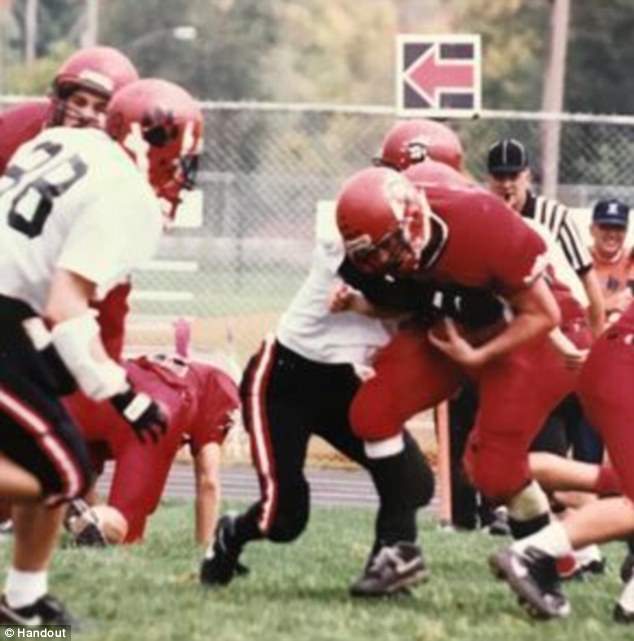 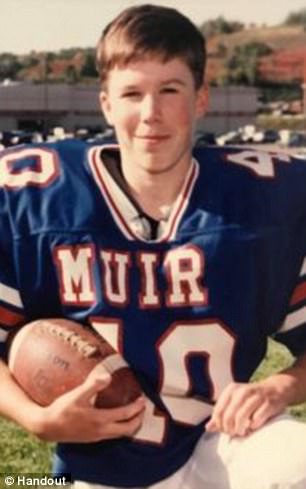 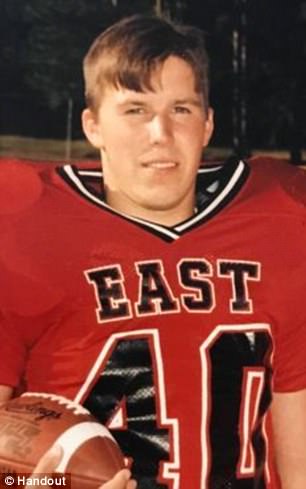 He was born into a football family and his father was his high school coach. Now his 11-year-old son is interested in the game but Drew worries about future consequences to his brain

His current symptoms and history of brain injury have led Drew and his doctors to believe he suffers from CTE, though it cannot be diagnosed until an examination is conducted on his brain after death.

‘Years ago I saw a neurologist and he went down the checklist and said I’m the perfect candidate for CTE,’ Drew said.

CTE has most notably affected NFL players and been linked to violent and erratic behavior, dementia, depression and suicide.

In 2017, groundbreaking research discovered CTE in 99 percent of former NFL players whose brains were examined after death.

Former New England Patriot’s star Aaron Hernandez was diagnosed with the most-severe case ever reported after he committed suicide in his jail cell while serving a life sentence for murder last year.

‘It’s scary to hear about former players, not just NFL athletes, but even those who played in high school,’ Drew said.

He added that after hearing the news of Aaron Hernandez, ‘My first human response was ”man I don’t want to be connected to a guy like that.”’

Now the father is struggling to answer to his 11-year-old son who is showing high interest in playing the sport.

Drew is against his son playing tackle football until at least 14 years old.

‘When we’re talking about kindergartners playing tackle football up to fifth grade, their brains are still developing,’ he said.

However, he is pleased with the developments to rules and techniques that teach the proper way to tackle and hit.

The Wisconsin Interscholastic Athletic Association requires high school players to sit out if they have suffered a concussion and to pass a strict medical examination to return to play.

Drew said he is still deciding on whether he will donate his brain to a study, but hopes that by the that point research will be able to diagnose CTE in living people.