David Goodman, 25 (pictured), was sentenced to 125 years and eight months to life in prison in San Bernardino, California court on Wednesday

A former Disneyland employee who volunteered at a children’s theater group was sentenced to more than 125 years in prison on Wednesday for child molestation.

David Goodman, 25, was found guilty last month of molesting multiple children between the ages of five and 11.

On Wednesday, the pedophile was officially sentenced to 125 years and eight months to life in a California state prison.

During the trial, prosecutors detailed how Goodman gained access to children.

‘In a detailed confession letter, the defendant mentioned the best way to gain access to kids was by befriending single mothers who he described as “easy targets,”‘ the district attorney’s office said in a press release. 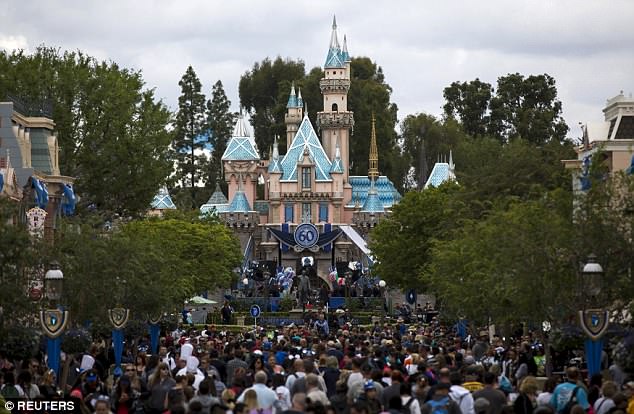 At the time of his arrested in December 2014, the pedophile had been working at Disneyland for two months (Disneyland pictured above in 2015)

At the time of his arrest in December 2014, the Banning man had been working at Disneyland for two months, and volunteered his time at a children’s theater.

Officers interviewed the two boys, as well as a five-year-old girl and one of their mothers, who said that Goodman committed sexual abuse on at least two separate occasions in the last several months.

When these crimes occurred, Goodman was 21 and had allegedly befriended two women in their early 30s, who each had children.

San Bernardino County Sheriff’s deputies later found a ‘manual’ titled ‘How to Practice Child Love’ on Goodman’s computer, which prosecutors introduced into evidence during the trial.

The victims testified during the trial, and were provided comfort by a victim advocate and a dog from the special victims K-9 unit.