But the trend is driven mostly by a handful of states, and certain lower-risk demographics who are not yet vaccinated, Dr Gottlieb says.

In fact, young people are driving the latest uptick in COVID-19 cases, as the increasing rate of vaccination in older Americans is preventing the most serious cases among seniors, said Centers for Disease Control and Prevention (CDC) director Dr Rochelle Walensky on Monday.

‘Cases are increasing nationally, and we are seeing this occur predominantly in younger adults,’ she said.

She cites the increasing spread of variants, but also a rise in youth sports and extracurricular activities as contributing to the steady increase in cases over the last four weeks.

The good news, however is that these young adults are not likely to die if they do contact COVID-19.

As a result, the average number of daily deaths has remained below 1,000 for the past five days. As of Sunday, 797 Americans were dying a day, including 222 that day, and the death toll has now surpassed 555,000.

Hundreds of deaths a day are nothing to be dismissed, but the U.S. recorded less than half a many deaths yesterday than it did the previous Sunday.

Half of U.S. states – including Michigan, Nebraska an Vermont – have seen infection rates rise over the past two weeks, which experts say were all but inevitable as governors begin reopening their jurisdictions.

But the U.S. is now giving more than three million Covid vaccinations a day, a clip  that Dr Gottlieb is confident will outpace the spread of the virus, even with the rising prevalence of variants.

Experts are torn by what to make of the rising infection rates, with some, like Gottlieb, arguing its an expected fluctuation in the pandemic’s tide, and others arguing that they’re worrying signs the pandemic will drag on. 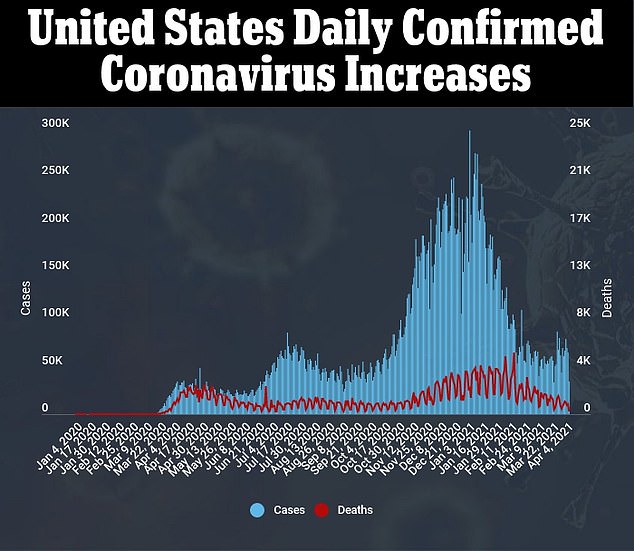 The seven-day rolling average of new infections is now above 63,000 a day, but fewer than 1,000 Americans are now dying of COVID-19 every 24 hours

‘What we’re seeing is pockets of infection around the country, particularly in younger people who haven’t been vaccinated and also in school-age children’ said Dr Gottlieb, who now sits on the board of directors for Pfizer.

During the week ending in March 25, the U.S. saw more than 64,000 new pediatric infections, the second week in a row of increases among children.

Children made up 19.2 percent of new cases that week. That’s more than the 13 percent of cases they have accounted for throughout the pandemic.

The Centers for Disease Control and Prevention (CDC) has deemed it safe for schools to reopen because infection rates among children are so low, and kids rarely die of COVID-19.

Nevertheless, as children return to in-person classes, an uptick in infections among kids who have spent much of the last year at home is hardly a surprise. 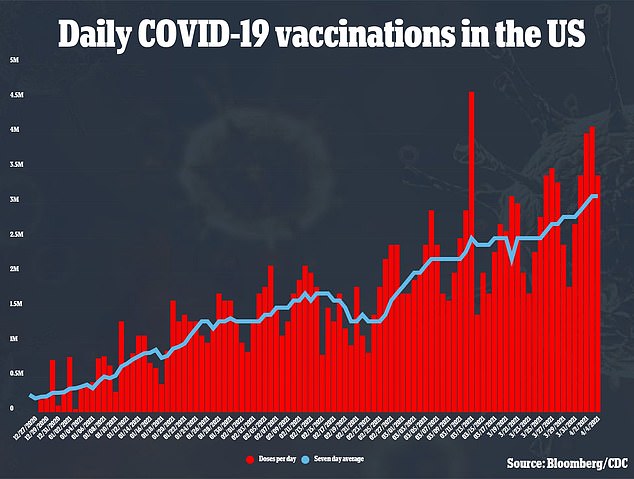 Nor is it surprising that as states allow more people to dine indoors and resume somewhat normal activities with just a third of U.S. adults vaccinated against COVID-19, adult cases would increase.

These increases have been seen in at least 25 states over the past two weeks.

All eyes have turned to Michigan, which saw more than 5,600 new cases yesterday.

That’s nearly four times as many new infections as were reported in the state a month prior.

Whitmer stuck to her guns and refused to roll back reopening.

Instead, she blamed the high prevalence of Covid variants in her state, and the failure of residents to follow the state’s policies to slow the spread of coronavirus.

Michigan is not the only state seeing a spike. 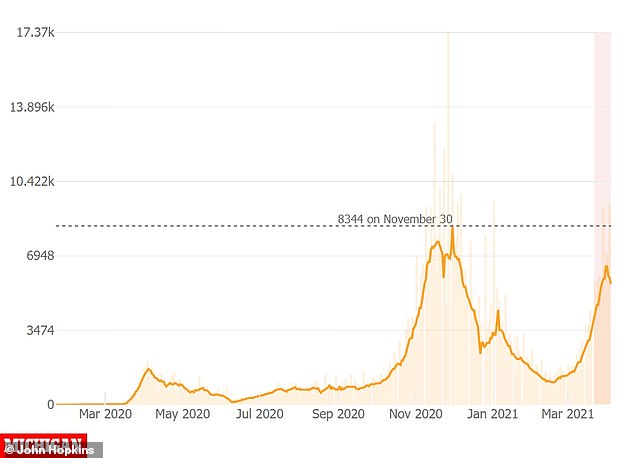 Michigan is seeing four-times more daily infection than it did a month ago, including 5,600 on Sunday

New infections rose to nearly 11,000 a day in New York last week, but have begun to trend downward again. In New Jersey, more than 4,500 people are now testing positive a day, up from 3,200 a month prior.

Florida is now seeing a steady rise in cases, with more than 6,000 confirmed Sunday – an increase of a third from mid-March. Spring Breakers descended upon the state, prompting violent clashes as law enforcement tried to stop them from maskless partying.

Puerto Rico, Nebraska and Vermont have now all surpassed Michigan for the most greatest increases in new infections in the past 14 days, according to DataUSA.io.

Nebraska has seen new infections rise 77 percent over the past two weeks, and Vermont’s cases have surged by nearly 36 percent. 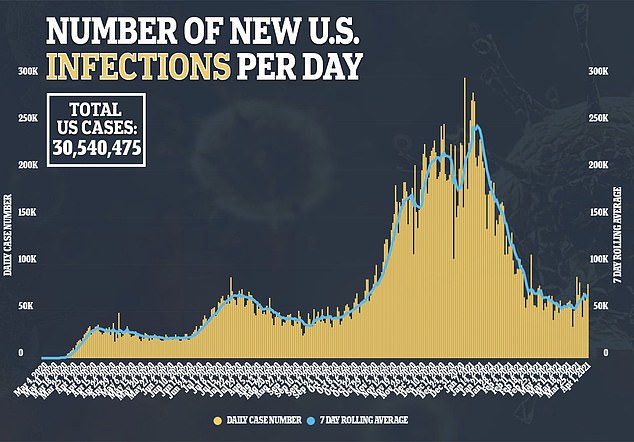 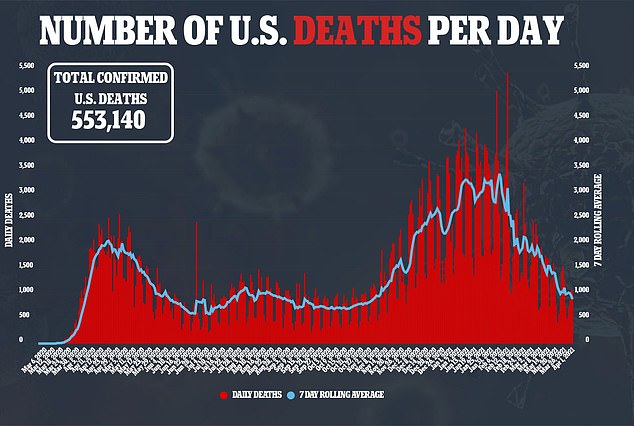 The number of new cases in Puerto Rico is now nearly double what it was 14 days ago, rising 88 percent since mid-March.

And there’s been a worldwide uptick in new cases.

Together, these trends have some experts worried – especially those who are working closely with the Biden administration – that a fourth surge will kill more Americans and prolong the pandemic.

Dr Michael Osterholm, a University of Minnesota epidemiologist and adviser to President Biden, warned that the U.S. is ‘just at the beginning of this surge,’ in a Sunday Meet the Press interview.

He predicted that the next two weeks will see a record number of new COVID-19 cases worldwide. 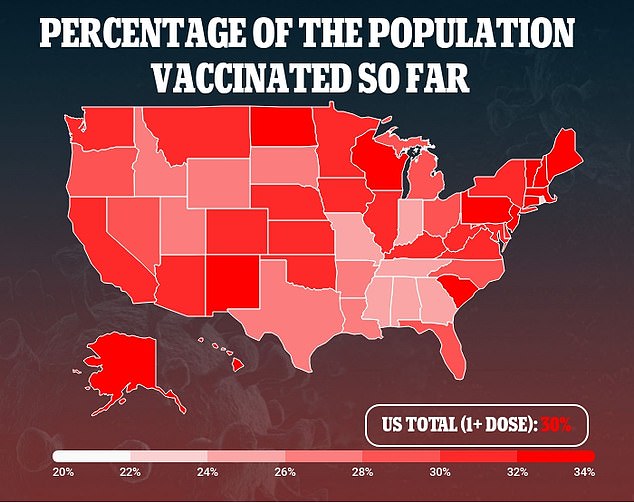 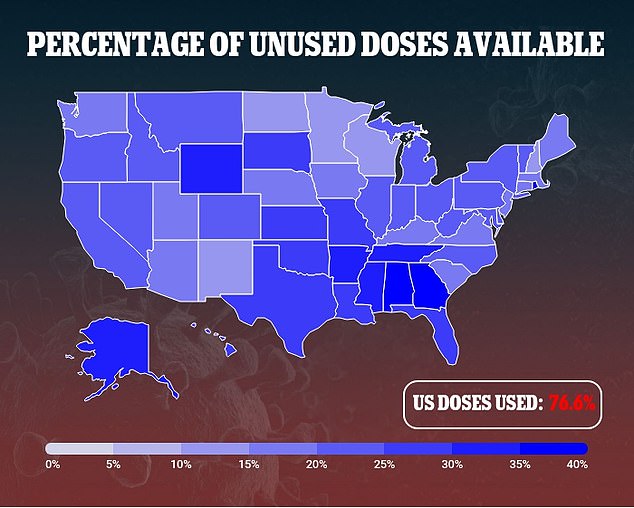 ‘And we’re now, I think, in that cycle where the Upper Midwest is just now beginning to start this fourth surge,’ he said of the U.S.

Experts are divided, with some placing their bets on the virus, and others predicting that vaccines are pulling ahead.

With a third of the adult population of the U.S. vaccinated and more than three million shots going into arms a day, the nation is on track to reach herd immunity with 75 percent of Americans vaccinated by July according to Bloomberg’s tracking.