France’s former Prime Minister François Fillon and his British wife Penelope have both been handed prison sentences after being found guilty of fraud.

Judges sitting at the Paris Correctional Court on Monday ruled that the couple had created fake jobs that paid Mrs Fillon almost £1million in public funds.

Mr Fillon, 65, was given a five-year sentence, with three years suspended, while his 64-year-old wife received a three-year suspended sentence.

The couple were also ordered to pay a total of £656,000 in fines. They have said they will appeal.

Francois Fillon (right) has been given a five-year jail sentence, three of them suspended, for a scam that saw him invent jobs that paid wife Penelope (left) almost £1million

All relate to a scandal dubbed ‘Penelopegate’ that ended the hopes of the conservative Mr Fillon becoming President of France.

The court heard that Mrs Fillon had pretended to be her husband’s parliamentary assistant for 15 years – despite never having visited the National Assembly.

She also claimed to be ‘literary advisor’ to a magazine owned by a friend of Mr Fillon’s which paid her thousands, despite never visiting its Paris offices.

The reality was that Ms Fillon spent most of her time living on the couple’s country estate near Le Mans, where she brought up their five children.

The couple, both devout Catholics, were in the running to become President and First Lady of France in 2017, but Penelopegate effectively ended their campaign.

Emmanuel Macron and his newly-formed En Marche! party eventually won the election in a landslide.

Calling for a five-year sentence for Mr Fillon, and three years suspended for Ms Fillon, prosecutor Aurélien Létocart had told the court: ‘Neither Penelope Fillon nor Francois Fillon were able to cite the names of witnesses capable of attesting to the activity of Penelope Fillon. 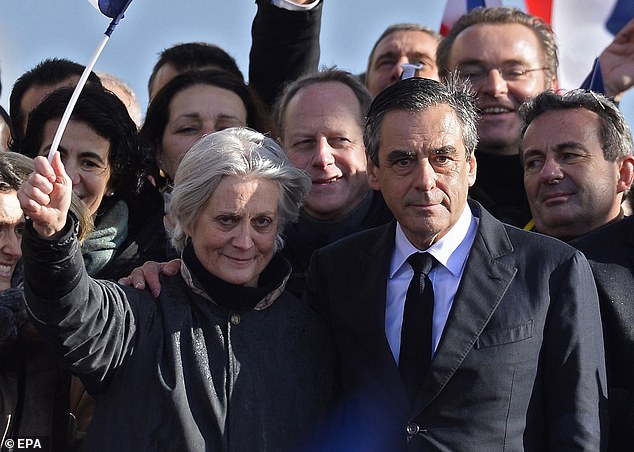 Penelope (left, with her husband during the 2017 election) claimed to work as her husband’s primary assistant, but in reality never visited parliament and did little more than sort his mail

Referring to an article in an English newspaper in 2007, Mr Létocart quoted Mrs Fillon as saying: ‘I like watching the world at work, it’s quite fun’.

In a later interview, in 2016, she again confirmed she had never worked for her husband before.

Mr Létocart said: ‘Who would say such a sentence after having exercised an intense professional activity?’

The prosecutor said: ‘The investigation showed that Penelope Fillon had led above all the life of a woman involved in the education of her children and the life of her home,’ and that she had ‘presented a very distorted version of reality’ to the court.

He said that the Fillons’ evidence conveyed ‘bad faith and is an insult to common sense.’

While Mrs Fillon had sorted out letters at the couple’s country home, 160 miles from Paris, this could not be classed as ‘parliamentary work’, he said.

Mr Létocart said Mrs Fillon had ‘no email, no diary, no presence in the National Assembly, no consistency in her employment contracts.’

He added: ‘In these conditions, it is difficult to grasp the professional space that Penelope Fillon could have occupied.’

In an earlier hearing, Ms Fillon had been asked about her reluctance to visit parliament, and had replied: ‘For this job, I didn’t need to go to the National Assembly.’

Asked what she actually did at the family home in Sablé-sur-Sarthe, which is south-west of Paris, Mrs Fillon had said: ‘It was precise, punctual missions, especially at the beginning.’

She said she ‘opened and sorted out’ letters, read local newspaper articles for Mr Fillon, and compiled short reports. 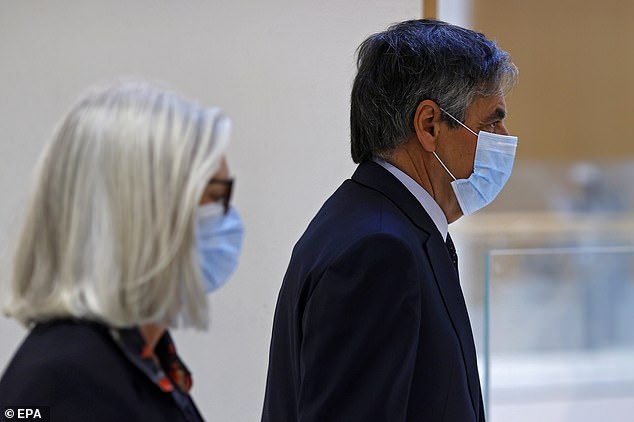 Penelope (left) has been handed a three-year suspended sentence while the couple have been ordered to pay a total of £656,000 in fines

But Mr Létocart said there was no evidence of any of these press cuttings, or of these reports, and that it was quite normal for people to sort out letters delivered to their private home without being paid.

They called for a three-year suspended sentence for Ms Fillon, and the same fine.

Marc Joulaud, the MP who did Mr Fillon’s constituency work when he served as Prime Minister for five years up until 2012, was given a two year suspended prison sentence after being found guilty.

Mr Jouland, 53, was said to have renewed Mrs Fillon’s fake contracts and increased her salary for doing nothing.

All three defendants were tried for the embezzlement of public funds, fraud, theft and criminal complicity.

Mrs Fillon is a solicitor’s daughter from Llanover, Wales, who went to King Henry VIII School in Abergavenny.

After studying modern Languages in London, and law at Bristol University, she married Mr Fillon, whom she had met while working as a teaching assistant in his home town of Le Mans.