Former friends locked in bitter £11,000 legal battle over who owns a miniature horse

When Cheryl Griffiths started dabbling in the world of miniature horses, things moved at a canter.

She quickly became firm friends with the head of the national group Ponies Association UK, Carol Cooper, and then hit the headlines as the owner of what was thought to be the world’s smallest donkey.

But things turned sour after Miss Griffiths sold a horse to Miss Cooper, then claimed she was not paid in time and had to seize the horse back.

Cheryl Griffiths, pictured with Contessa, claims she owns the horse because her former friend failed to pay her for the animal and was forced to seize it back 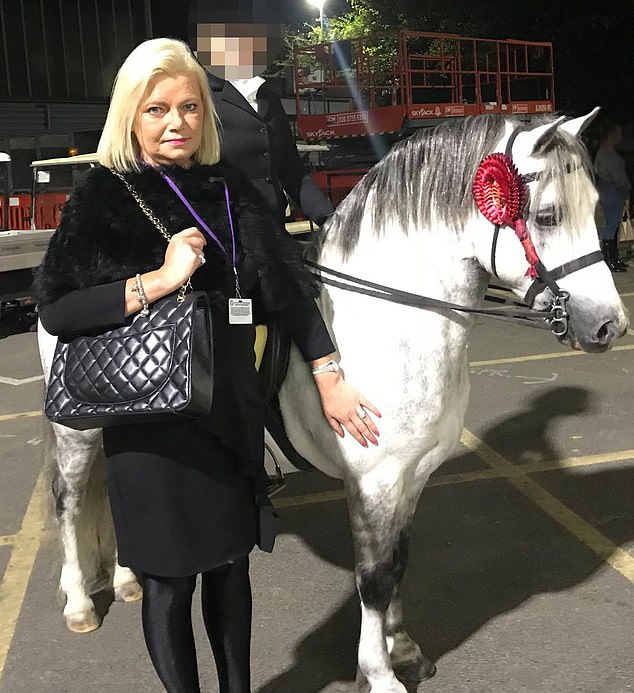 Carol Cooper pictured, accuses her former friend of trespass and theft after she took back the horse. The case will be heard at Coventry County Court on December 10

Miss Griffiths, 49, has now been accused of trespass and theft by her former friend and is being pursued in a civil court to return the pony, cover the £4,000 cost of buying a similar animal and pay £7,000 in legal costs.

In a final kick in the teeth, Miss Griffiths claims Miss Cooper’s influence has led to her being ostracised by the miniature horse community, with bullying comments posted online and bans from horse shows.

Miss Griffiths says her new lifestyle began to unravel when Miss Cooper, 47, became jealous of the coverage she received for her tiny donkey, Ottie, which was just 19in tall.

Their friendship allegedly hit another hurdle after Miss Cooper was upset by Miss Griffiths’ failure to persuade her new media contacts to get her cat, Winston, on television for his ability to climb Christmas trees.

The sales consultant, from Sawtry, Cambridgeshire, began her hobby three years ago after a back injury stopped her riding.

She began to buy horses and entered them in shows, where she met Miss Cooper. But the relationship soured, she claims, last December when she failed to drum up interest in Winston from TV producers.

Miss Griffiths added: ‘It seemed to upset her. She’s used to getting her own way.’ Soon after, they agreed on the £900 sale of her horse, Contessa.

But mother-of-one Miss Griffiths claims when she brought the seven-year-old rosette winner – and another horse to be stabled – to her friend’s home near Fillongley, near Coventry, she was told the initial payment of £500 in cash was not available. Instead, she was asked to invoice Miss Cooper’s boyfriend, Turkish businessman Tolga Falahat.

‘I told her if I didn’t get the money by Sunday I would collect the horses,’ she said, adding that when no money was paid after several days, she went to the stables and took the horses.

She then received a letter from a solicitor acting for Mr Falahat, warning she would be taken to court if Contessa wasn’t returned in a week. It stated: ‘Carol was so distressed that these animals… had been taken she collapsed and began to vomit.’

It claimed the sale was based on an oral contract with no dates of payment mentioned. Miss Griffiths refused to return Contessa and the case will be heard at Coventry County Court on December 10.