Gen. James Grazioplene pleaded guilty to one charge of aggravated sexual battery against his daughter in a Virginia court on Wednesday

Gen. James Grazioplene admitted guilt in a circuit court in Prince William County, Virginia, in exchange for a suspended sentence after years of protesting his innocence against rape and assault claims made by his daughter.

Jennifer Elmore, 49, has spoken publicly of the allegations she leveled against her father since she first decided to report his abuse to the military in 2015.

The mother of five claims she remembers her father’s sexually abusing her from three years old. The abuse developed into rape, continuing throughout her teenage years.

‘At 3, he led me to the dark, dirty basement of my grandmother’s house and put me on the washing machine and pleasured himself while molesting me,’ Elmore said, according to a copy of her victim impact statement provided to CNN by attorney Ryan Guilds.

‘At 8, he bought me a piano and insisted on taking me to piano lessons, all so he could park and take whatever sick pleasures that he so desired. The same horrors occurring as he regularly insisted on bathing me. It took me until college to be able to use a bar of soap,’ she added. 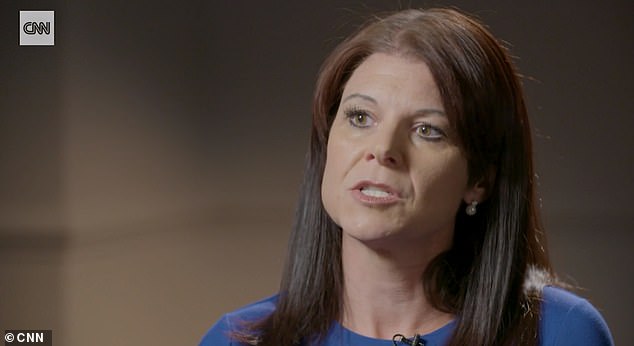 Jennifer Elmore, 49, (pictured) came forward with allegations against her father, retired Army General James Grazioplene in 2015. He plead guilty to one charge this week

‘He stripped me of my dignity, my innocence, my value, my childhood and my voice. All of the things that a father is supposed to protect at the expense of his own life. I will spend a lifetime putting back the shattered pieces you left behind.’

Grazioplene, who is in his 70s, was first arrested in Virginia in December 2018 and is expected to be released this week and placed on 20 years probation.

‘It’s a reflection of the fact that Jennifer cares more about the truth than the punishment,’ Guilds told CNN.

The retired general was tried in Virginia after a military court was forced to dismiss on a technicality in March 2018 charges the Army brought against him.

Elmore decided to come forward and tell Army officials that her father repeatedly raped and molested her in 2015 and an investigation was immediately launched.

Even though it was now more than thirty years after the alleged abuse took place, the two-year investigation found enough evidence to take it to a trial in April 2017.

Grazioplene faced a court-martial and loss of his pension on the charge that he raped a child over a six-year period while on active duty in the 1980s.

He is one of the few generals in modern history that the Army has attempted to court-martial.

However, a separate ruling from the top military appeals court just two weeks before the trial was set to begin resulted in the charges being thrown out.

A ruling by the U.S. Court of Appeals for the Armed Forces in United States v. Mangahas  found that there was a five-year  statue of limitations in effect on a rape case dating from 1997.

The decision effectively limited the statute of limitations in Grazioplene’s case to five years under the same rule, as it had happened before 2006. 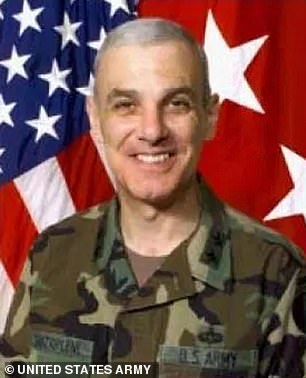 Gen. James Grazioplene has claimed his innocence in the allegations of sexual abuse and rape made by his daughter

Elmore continued to push for her father’s prosecution, looking to the state of Virginia, where their family had lived for a while when she was a teenager.

Virginia has no statute of limitations on a felony charge but the charges that were brought against Grazioplene were limited to those that took place in the state.

The family had lived in New York, Kansas, North Carolina, Germany and Virginia as Grazioplene was relocated by the Army.

Elmore says that her first memory of abuse happened in New York before escalating in other states to ‘night visits’ to her bedroom as she got older.

According the Washington Post, the Army had charged  Grazioplene with rape between 1983 to 1989 but Prince William authorities are focused on the years 1988 and 1989, when the family lived off-base in Woodbridge, Virginia.

At the time, Elmore was a high school junior and the family moved again to North Carolina before her senior year.

Grazioplene was arrested on December 7, 2018, after a four-month investigation by Virginian authorities.

On Wednesday, he pleaded guilty to one charge of aggravated sexual battery as Elmore looked on.

‘Today was a win,’ Elmore told CNN. ‘But I’m extraordinarily sad. The way I feel right now is like an orphan.’

His wife Ann Marie Grazioplene, Elmore’s mother, was also present in the courtroom. 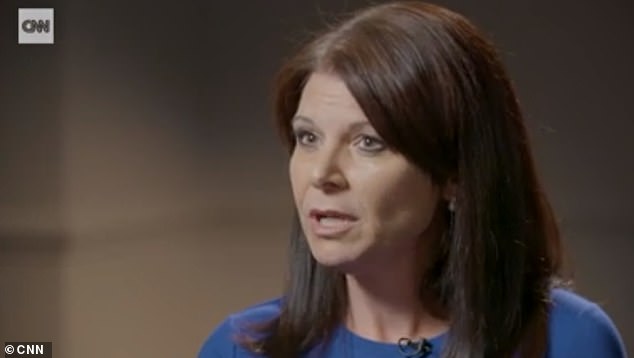 Elmore says that she confided in an aunt while in college who confront her father. the aunt says that Grazioplene admitted the abuse against his daughter throughout her childhood 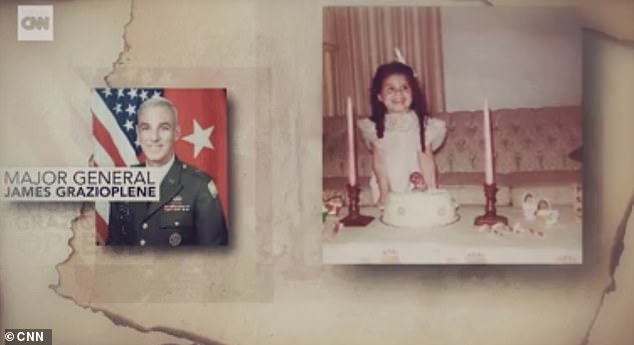 Letters Ann Marie wrote in the 80s had been used among the evidence gathered against her husband.

‘Jim has … made an attempt at sexually molesting Jennifer. She was sleeping, thank God, and I caught him before he got started,’ one letter read.

‘All the while I was playing housewife he was taking perverted liberties with my child,’ she wrote in another.

Ann Marie previously told CNN that her words had been distorted and she remains married to Grazioplene.

Elmore told the Washington Post that she was in college before she fist told anyone about the abuse.

At one point she said she confided in her fraternal aunt Elizabeth Powley who confronted her father.

‘He said it was the worst thing he could have ever done to anybody, and that it was not happening still,’ Powley said. ‘To this day, I will die not knowing why my brother did this.’

Elmore marked the tipping point that led her to eventually come forward to make her claims to the military as a January 2015 phone call with her parents in which Grazioplene allegedly said that ‘the only thing worse that I could have done to you is murder you’.

Grazioplene is a native of Virginia who graduated from the US Military Academy in West Point, New York.

He entered the Army in 1972 as an armor officer.

Prior to his retirement in 2005, he worked as the director of force development in the Pentagon’s Joint Warfighting Capabilities Assessment.

He has also worked with DynCorp International, a military contractor, and Mission: Readiness, an organization of retired admirals and generals working with school children.