Yalda Alaoui was a high flying financier whose high octane life in the City came to an abrupt halt when she suffered a rare blood disorder which almost killed her.

Ten years on she is a leading food nutritionist with a lengthy waiting list for appointments and a clientele that includes the likes of England footballer, Ruben Loftus-Cheek.

The remarkable transformation began with that blood disorder in 2012 when her health crashed.

At first doctors were unable to make the link between the condition she had been diagnosed with and an autoimmune bowel disease she had suffered from since she was a schoolgirl.

Yalda Alaoui, 43, from Kensington, London, became a leading food nutritionist after she almost died from a rare blood disorder which a haematologist discovered was caused by inflammation and linked to her ulcerative colitis, which she was diagnosed with in her 20’s 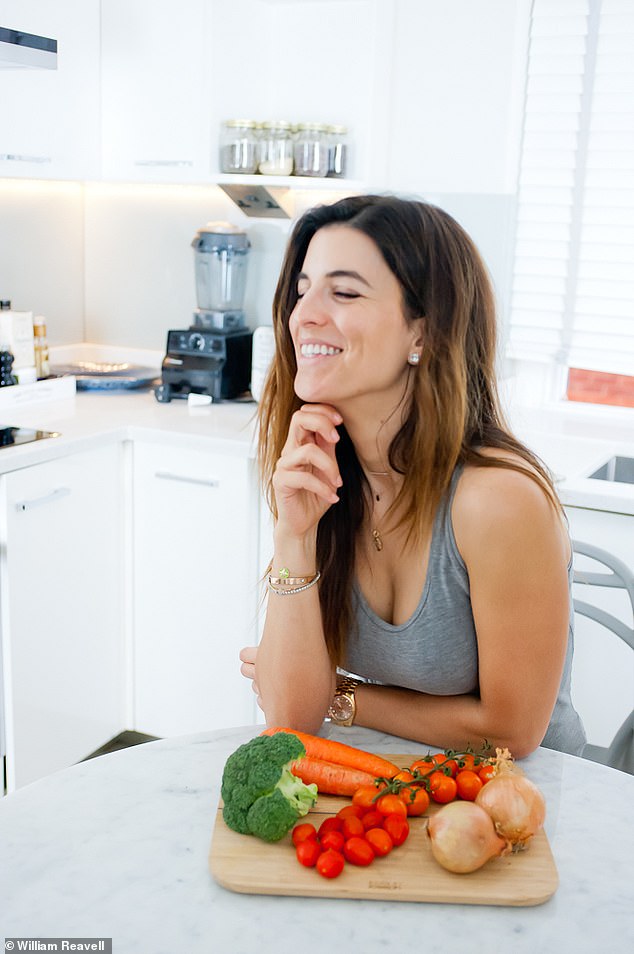 Long term chronic inflammation can have a devastating impact on your body- potentially leading to cancers and strokes- and the symptoms include exhaustion, depression and weight loss as well as gain. Most patients such as Yalda do not know they have it unless they are diagnosed with another condition and the link to inflammation is made 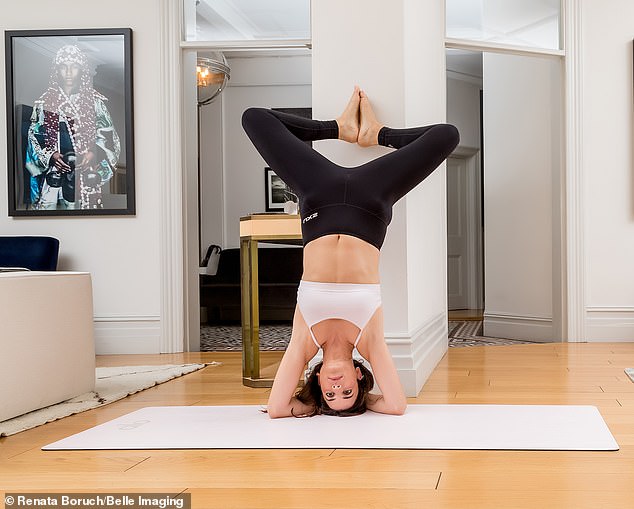 Eventually Yalda decided the best route to recovery was through her own research and in 2018 she launched her own anti-inflammatory and gut health programme called Eat Burn Sleep which includes a six week ‘reset’ to help eat well, sleep well and fight off food cravings. The diet is rich in unprocessed meat, fish and poultry and low-sugar fruits and also includes yoga, Pilates and walking

Yalda, now 43, said: ‘I almost died, I went to see doctors but they couldn’t fix me up and it was only later when I went to see a haematologist that we made the connection between the two conditions.

‘When I was young I had stomach pains, right through until I was in my 20s, when I was diagnosed with ulcerative colitis, it’s an autoimmune bowel disease where the colon becomes inflamed and ulcers develop.

‘With the haematologist’s results we were able to see that the link between the blood disorder and the colitis was inflammation.’

Inflammation is the body’s way of fighting infections and injuries in an attempt to get better, through the release of antibodies and proteins and in the short term such as fighting off a cold or dealing with a cut it’s short term and lasts only a few hours.

But long term chronic inflammation can have a devastating impact on your body – potentially leading to cancers and strokes – and the symptoms include exhaustion, depression and weight loss as well as gain.

The most common causes of inflammation are a diet high in junk food, sugar and alcohol and a sedentary lifestyle, with smoking and obesity also being a stimulus. 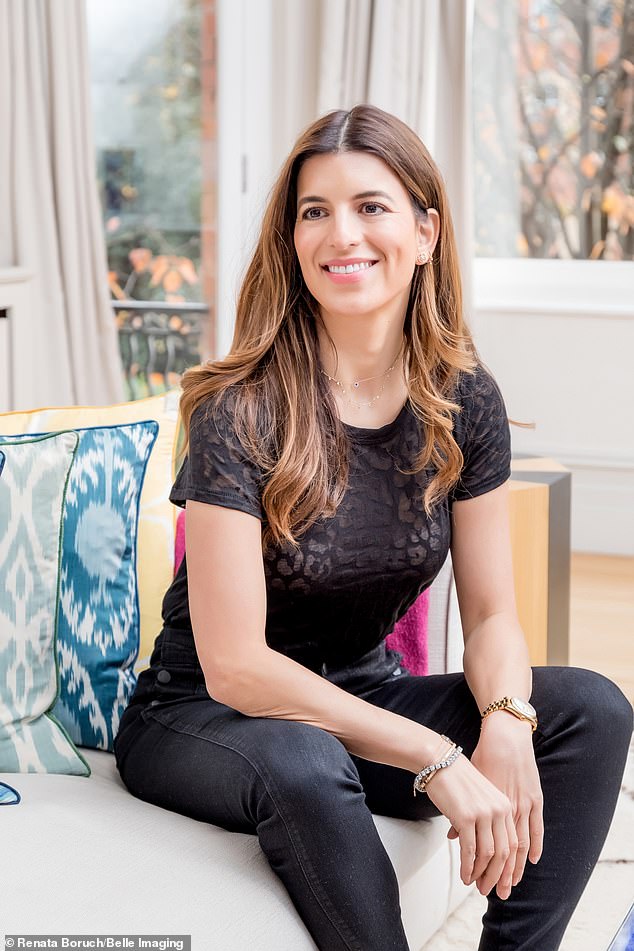 Yalda said that walking is a great way to exercise and that people only need to do it for 20 minutes or so a day. She recommended walking to the shop or around the park 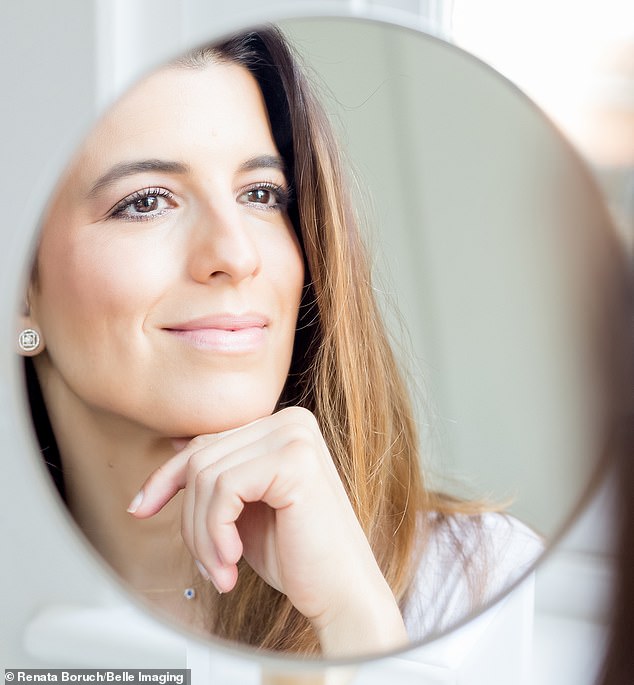 Most patients – as in Yalda’s case – don’t know they have inflammation unless they are diagnosed with another condition and the link is made and although treatable with drugs experts say the best remedy is a lifestyle change.

Yalda told FEMAIL: ‘For almost ten years, I had tried and tested many diets and lifestyle changes to heal my autoimmune issues, the ulcerative colitis and the hemolytic anemia and an anti-inflammatory lifestyle turned out to be the answer to my problems, and in fact to most health issues.

Eventually Yalda decided the best route to recovery was through her own research and in 2018 she launched her own anti-inflammatory and gut health programme called Eat Burn Sleep which includes a six week ‘reset’ to help eat well, sleep well and fight off food cravings.

The diet is rich in unprocessed meat, fish, poultry and low-sugar fruits and packs in a schedule of yoga, Pilates and walking which Yalda insists is the best exercise of all and most importantly also free. 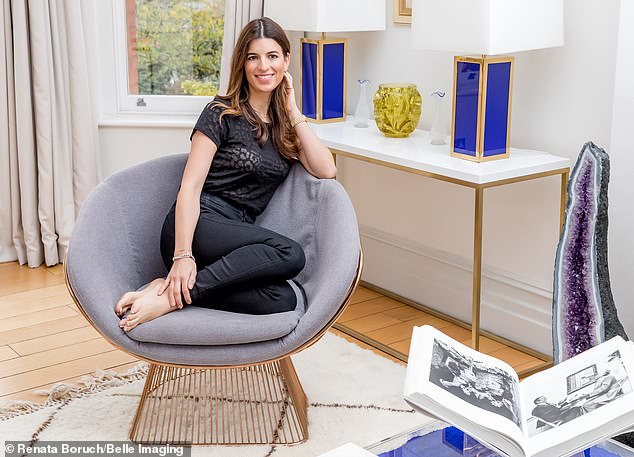 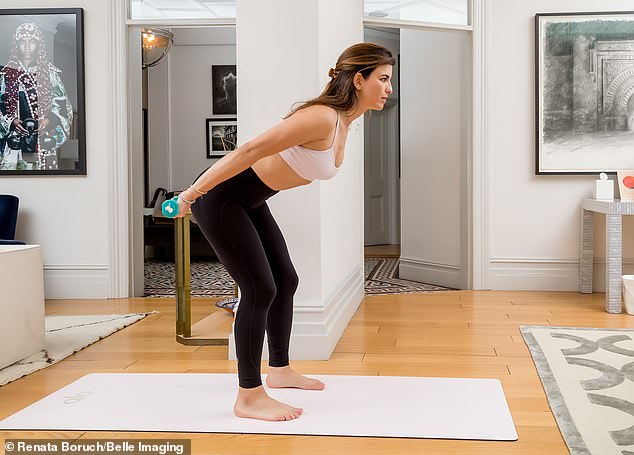 She added that there is a link between anxiety, depression and inflammation and that it is important people try and reduce stress also

Yalda – who has more than 63,000 followers on her Instagram – said: ‘Walking is such a great way to stay in shape and you only need to do twenty minutes or so a day – we can do that easily, just walk to the shop or walk around the park, now that summer is here and the weather is good there is no excuse not to get out.

‘I would include walking in your daily must-dos as it’s meditative, reduces inflammation and helps burn fat while preserving muscle mass and improves digestion. I know the fashion at the moment is high intensity work outs but I strongly believe that in the long run they don’t help and it’s better to do regular and non-taxing exercise like walking.’

The mother-of-two boys aged 12 and 14, who lives in Kensington, west London, added: ‘It’s not just about food though, movement and mental well-being are also important way to reduce inflammation. It’s all about reducing stress as well because there is a link between anxiety and depression and inflammation.

‘Fifty percent of people diagnosed with depression report 18 months later to being no better despite taking medication because when you have depression and you don’t start an anti-inflammatory lifestyle the inflammation pathways are nourished. 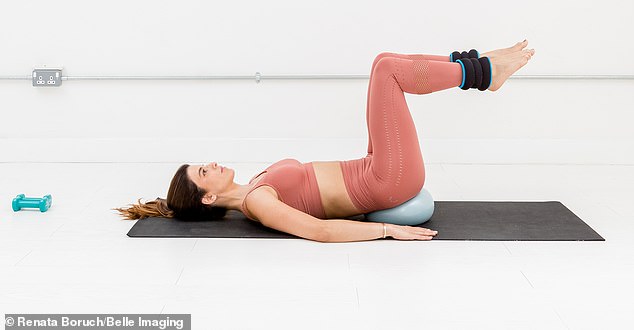 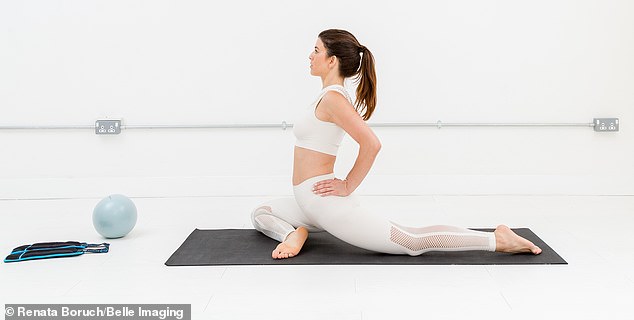 The 43-year-old added that many people are ‘over fed’ and ‘under nourished’ nowadays and that processed foods can lead to unstable blood sugar levels, leading to many health problems such as obesity and heart attacks

Yalda added: ’Inflammatory disease is really on the rise and especially among children who are obese and because they are obese they get stressed and when you are stressed you get elevated cortisone levels which makes it hard to control inflammation.

‘Your fight or flight response is triggered and it switches off the part of your nervous system that controls rest and digestion but through my programme you can really see the benefits in just a few weeks and it applies to all age groups.

‘Today many people are over fed and under nourished. If you consume more processed foods, it will give you unstable blood sugar levels, leading to diabetes, obesity, heart attacks and these are all going to cause a burden to the health care system. 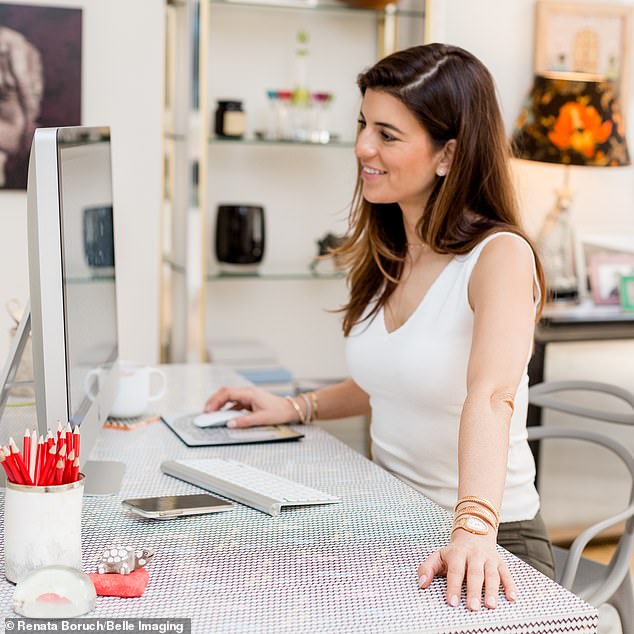 ‘What you eat and how you feed your stomach is paramount to mental and physical wellbeing, when we eat food that doesn’t feed you nutritionally your body is never satisfied, so you will eat more. Overindulging in food that isn’t nourishing will without a doubt encourage inflammatory disease.’

And Yalda is quick to point out that following a healthy diet of fresh fruit and vegetables doesn’t have to be expensive – and even on a tight budget there a are quick and tasty recipes.

She said: ’On my website there is a wonderful immune busting chicken soup with tasty ingredients that doesn’t just fill you up but the ingredients work together to boost the body rather than deplete it and it costs just £2.50 per person.’

Yalda has more than 5,000 people signed up to Eat, Burn, Sleep with testimonials on her website all highlighting the benefits and improvements they have had from following her programme – among them Chelsea and England star Ruben Loftus Cheek who said the lifestyle ‘helped me improve my stamina and go longer on the pitch’. 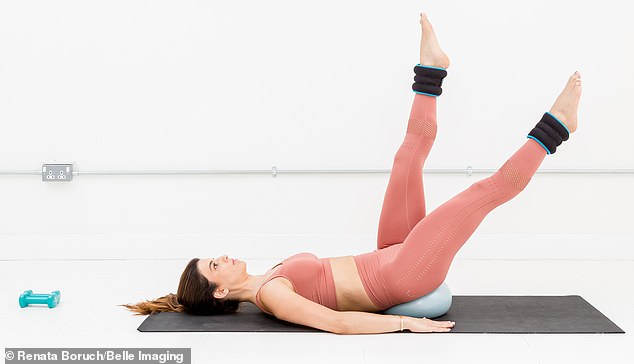 On her programme, Yalda now has more than 5,000 people signed up and has had testimonials from people including Chelsea and England star Ruben Loftus Cheek who followed her programme 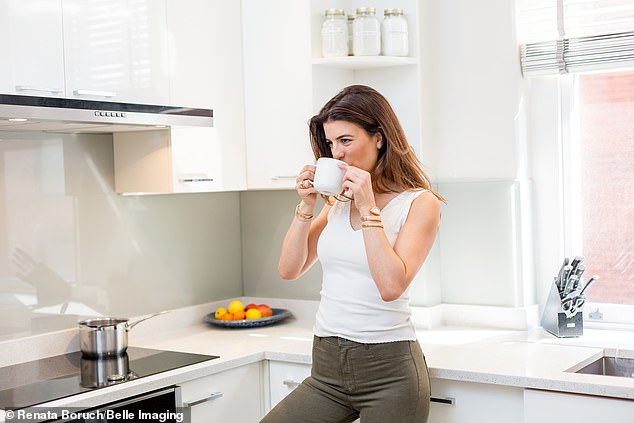 Yalda said that when she worked with Ruben, she managed to change his life dramatically and improve his stamina

Yalda said: ‘Ruben is just one of many people who have been delighted with the programme and whose lives have changed dramatically.

‘He contacted me during lockdown and we spent hours on Facetime going over his lifestyle and I gave him some ideas to help promote his recovery and improve his stamina.

‘He was prone to injury and we helped resolve the issue by reducing inflammatory foods from his diet and suggesting some mediation routines.

‘But it’s not just Ruben, most of my members have told me they are the fittest and healthiest they have ever been and what’s interesting is many say they see it after just a few weeks, so positive results can come in the short term.’

What is ulcerative colitis?

Ulcerative colitis is a long-term condition where the colon and rectum become inflamed.

The colon is the large intestine (bowel) and the rectum is the end of the bowel where stools are stored.

Small ulcers can develop on the colon’s lining, and can bleed and produce pus.

The main symptoms of ulcerative colitis are:

recurring diarrhoea, which may contain blood, mucus or pus

needing to empty your bowels frequently

You may also experience extreme tiredness (fatigue), loss of appetite and weight loss.

The severity of the symptoms varies, depending on how much of the rectum and colon is inflamed and how severe the inflammation is.

For some people, the condition has a significant impact on their everyday lives.

Some people may go for weeks or months with very mild symptoms, or none at all (remission), followed by periods where the symptoms are particularly troublesome (flare-ups or relapses).

During a flare-up, some people with ulcerative colitis also experience symptoms elsewhere in their body.

For example, some people develop:

In severe cases, defined as having to empty your bowels 6 or more times a day, additional symptoms may include:

a fast or irregular heartbeat