A high-flying doctor who once kicked a policeman in the face had a ‘spectacular fall from grace,’ his lawyer said as a judge sentenced him for more criminal offences.

Mark Alner, a former hospital radiologist, returned to the dock after he was caught drink driving three times in seventeen days – and stealing shopping from a supermarket.

The 54-year-old was banned from driving for five years and handed a 26-week prison sentence, suspended for 18 months, for his latest crimes.

Poole magistrates’ court heard that in the latest series of offences, Alner was spotted stealing £9 worth of grocery items after driving to Tesco in Waterloo Road, Poole, on the afternoon of April 15 2016.

When police stopped him they smelt alcohol on his breath and a test revealed a breath-alcohol level of 49, over the legal limit of 35.

After stopping his vehicle a blood test was carried out, revealing a level of 90 – the limit for blood is 80.

Alner, 54, who lives with his elderly mother in Poole was also given a curfew meaning he will be electronically monitored for 10 weeks between 8pm and 8am.

He received an 18-month community order with the requirement to take part in 30 rehabilitation activity days and was ordered to pay £650 costs and £115 victim surcharge.

Alner is a former consultant at the Dorset County Hospital but was struck off by the General Medical Council in 2012.

The following year he was jailed for 90 days after a succession of court appearances in which he was convicted of punching a train driver, attacking a police officer, drink driving and driving while disqualified.

In May 2012 Alner kicked PC Rob Hoskins in the head while he was being arrested for refusing to take a breath test during a traffic stop. 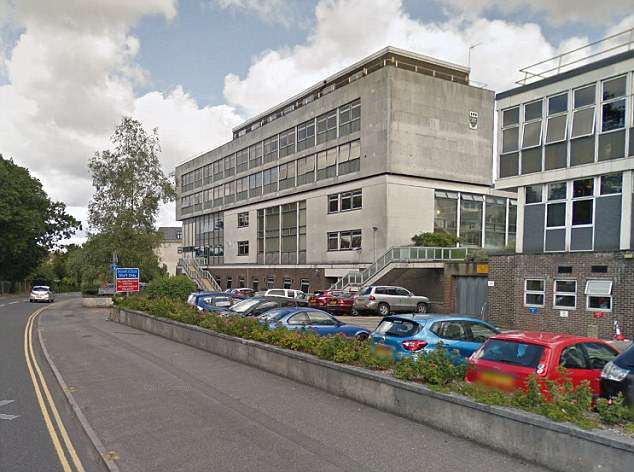 On April 27 2016, Alner’s Audi TT car collided with the rear of a stationary vehicle in Blandford Road, Poole. A breath test revealed an alcohol level of 42.

Defending Alner, Mike Flynn told District Judge Stephen Nicholls: ‘Mr Alner has had a spectacular fall from grace and has no purpose to his days. He is a very intelligent man who finds his days mind-numbing.’