Sandra Robles, 25, is suing Milwaukee County jail for allegedly forcing her to wear shackles as she gave birth on February 24, 2014

A former jail inmate has filed a federal lawsuit claiming she was forced to wear leg and arm shackles as she gave birth.

Sandra Robles, now 25, is suing Milwaukee County jail for allegedly forcing her to wear leg shackles where the chain was so short she couldn’t reach the stirrups as she gave birth on February 24, 2014.

In her lawsuit, where she names the county and acting Sheriff Richard Schmidt, she says police refused requests by medical staff to have the shackles removed.

Robles, who now has two children and a job, says she was even denied full skin contact with her newborn as her hand was chained to the bed.

Even after she delivered her child, Robles wore the shackles to the restroom.

The lawsuit says the sheriff’s office policy of shackling pregnant inmates while in the hospital was punitive and excessive, and that it violated Robles’ civil rights, according to the Journal Sentinel.

‘Preventing walking during the first stage of labor may deny the woman the benefits of labor acceleration and discomfort alleviation,’ the lawsuit says.

‘Preventing walking during the postpartum phase may enhance the risk of deep vein thrombosis and its life-threatening embolic complications,’ it adds. 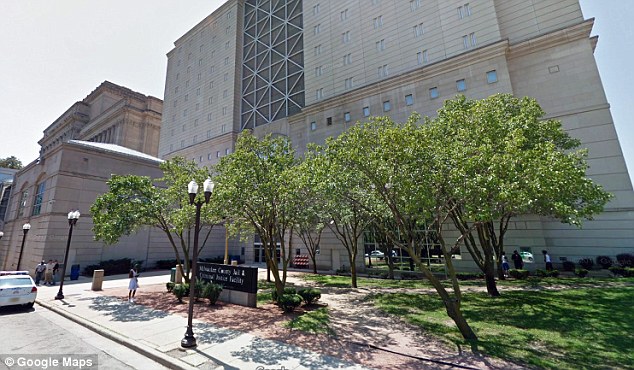 A Milwaukee County Sheriff’s Office is yet to comment on the lawsuit.

Robles has no criminal record in Milwaukee County under that name. Her lawsuit does not indicate her current residence or why she was incarcerated at Milwaukee County from mid-January to mid-March 2014.

But this isn’t the first time this jail has run into trouble.

A woman was awarded nearly $7million last year after she alleged that she was sexually assaulted while pregnant at the jail and forced to give birth in shackles as well.

According to court records, some 45 women have filed lawsuits over giving birth while shackled. The shackle policy was dropped in February 2017 unless a supervisor deems that restraints are necessary to prevent escape or injury.

Robles’ suit is at least the fourth one to be filed over births by inmates since 2014.