A former intelligence officer came to the rescue of her one-time Afghan interpreter yesterday after British soldiers at Kabul airport refused to allow him and his family to board a freedom flight.

Pam French was on the telephone to Nawaz, 30, with whom she had worked years earlier at a special forces base in Helmand.

She heard the chaos behind him as he was told for a second day running he did not have the correct paperwork to enter and wait for a flight.

‘I had called to check on his progress so I heard everything that was happening,’ said Mrs Palmer, who had been gardening near her home in Wales yesterday.

‘It sounded pretty busy and noisy and I asked to be put on the phone to the soldier. I explained clearly that he had all the paperwork correct and approval, and did have a place on the plane and to allow him through.

‘One soldier called to another saying “There’s a woman on the phone saying he has permission”. They sounded panicked which was hardly surprising as it looked manic. I waited and later heard that he and his family had been allowed through and were due to fly later.’

A relieved Nawaz later confirmed to the Mail that he was safely through with his wife and five children, all of whom are under ten. It had been the second day running that the interpreter and his family had battled to make it into the airport after being told by the British Afghan team he was booked to fly. 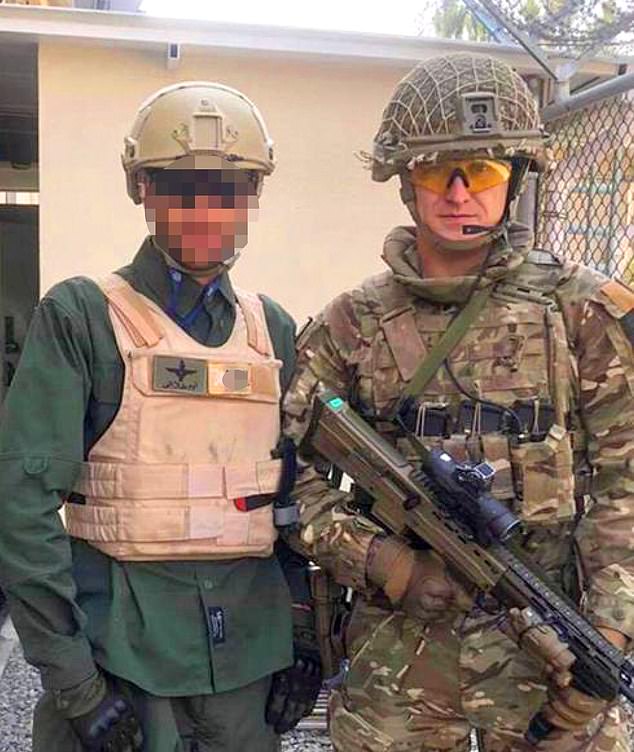 Pam French was on the telephone to Nawaz (pictured with a British soldier), 30, with whom she had worked years earlier at a special forces base in Helmand

Mrs French, a mother of two, said that on Tuesday, after getting through Taliban checkpoints, he had been turned back by British soldiers who told him he did not have a visa.

Beaten as he tried to flee

A former British interpreter named Matiullah told last night how he was beaten by the Taliban and branded a ‘shame and a disgrace’ for working with UK forces as he tried to reach Kabul airport.

‘They beat me with wooden sticks and I was terrified,’ he said. ‘Then they held me but I slipped away with my family.

‘There were so many people around that I could hide among them. I was very frightened and scared what they would do with my children.’

When they finally arrived at a British checkpoint, soldiers who were overwhelmed sent the family away.

Last night, Matiullah. who worked for UK troops in Helmand between 2010-2014, was in hiding in Kabul, appealing to Britain for help to escape.

In fact, he had an email letter from UK officials stating that the visa would be provided on arrival in the UK. Amid the chaos at the airport, she said, one of Nawaz’s children had become separated from the family. They spent several frantic hours looking for him.

Campaigners say the case clearly shows the difficulties faced by the team in Kabul. The conditions are tense, with hundreds of Afghans demanding flights. One senior former officer described it as an ‘appalling mess – and that’s being polite’. He said those dealing with cases faced an intimidating ‘volume of numbers’.

Luckily for Nawaz, he had been with Mrs French when she was an intelligence officer in Helmand at a highly sensitive base, Camp Juno.

In recent weeks, she has been pressing the case behind the scenes for a dozen interpreters who worked there running spies and analysing information.

‘It was highly difficult and potentially dangerous work and Nawaz was one of a very good team whose lives were at risk,’ she said.

Initially, the interpreters from Juno were refused relocation because they had not been directly employed by the UK government.

But after their cases were highlighted by the Mail’s Betrayal of the Brave campaign Defence Secretary Ben Wallace personally gave several the go-ahead for relocation.

Nawaz had worked for seven years in Helmand and was hospitalised after one operation. Four years ago, he began working through a private contractor with British forces training Afghan soldiers.

From holiday to hell – Briton’s diary of despair: London cab driver details how he hid in terror from the Taliban with his wife, their one-year-old son, and family members after attending Afghanistan wedding

By Andy Jehring and Glen Keogh for the Daily Mail

London Uber driver Sabrallah Zahiri, 26, flew to Kabul with his wife, their one-year-old son, his parents and his three sisters on July 19.

They were there for the wedding on August 8 of his two brothers, Abdul Wajed, 22, and Fatur Ramun, 23, both studying mechanical engineering at West Thames College.

Only days later, they are cowering in their uncle’s home, hiding from the Taliban. Here is Mr Zahiri’s account. 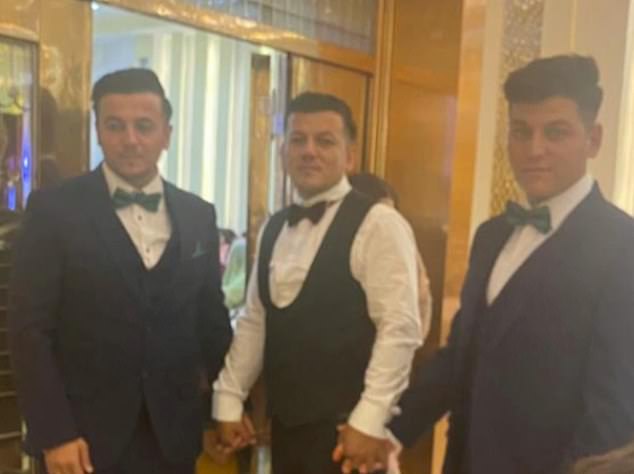 Sabrallah Zahiri (pictured centre, with his brothers at the wedding) travelled to Kabul with his family on July 19

JULY 19 I am very excited as I have not been back to see my friends and family in Afghanistan for over a year. My father was a doctor who had to flee the Taliban and arrived in the UK in 1999, and I moved over with the rest of the family in 2011. Kabul Airport is calm and safe, just like Heathrow. We take a taxi to the home of my uncle. He has a huge house.

JULY 20-31 I am busy making preparations for the wedding. I drive around Kabul visiting old friends and families and we share feasts.

AUGUST 1-3 We visit the village where I was born, two hours from Kabul. It’s just like driving in the UK. We catch up with friends and talk about how we miss each other. Nobody mentions the Taliban.

AUGUST 8 The wedding. First we have the reception. We eat three types of rice, four kinds of kebabs, fish, salads and juice for all the 2,000 guests. There is dancing 4am. There are no worries. It is perfect.

AUGUST 9 We are very tired. We are recovering when the mood begins to change. Everyone starts to get nervous. There are reports the Taliban are getting closer. We are checking the news all the time.

AUGUST 11 I try to get an earlier flight home. We were booked for August 24. The earliest they could do was the 16th. 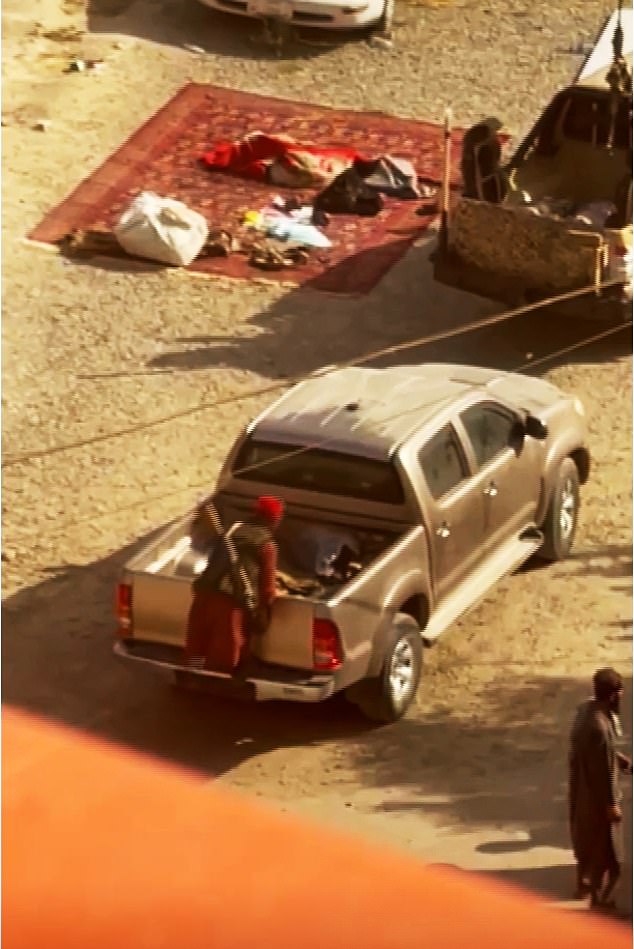 At the door: Armed Taliban search outside the home where Zahiri is trapped in Kabul after being stranded

AUGUST 12 The Taliban are within 50 miles of the city. I know the Vice President, so I call him. He tells me that they will not get into Kabul. We still think we will make our flight. But I am getting worried.

AUGUST 14 Panic hits the city. Rumours go around that the Taliban are inside Kabul. Things start to feel very bad.

AUGUST 15 Now it really is changing. People start stealing everything. Cash machines are emptied and checkpoints are put up all over the city. I am worried about our flight so I go to the British Embassy. Everyone is gone. Then the Taliban come into the city. They are all over. Everyone is running away. It is chaos. I run in my sandals. I must run 20 miles to get away from them. I cannot describe how scary they are. I have never in my life seen them before. To come face to face with them is just terrifying. There is shouting and screaming and gunfire all over the city. I make it back to my uncle’s and the Taliban come – 20 at our door. They want my car. One puts a gun to my head. He says, ‘Give me it or I will shoot you,’ so I give him the keys. I call the Embassy who tell me not to leave. They say wait for them to call back – but they do not.

AUGUST 16 Still no call from the Embassy. We can hear gunshots and swearing and shouting by the Taliban all over the city. They are worse than animals.

AUGUST 17 The Taliban come. They ask my uncle why he is keeping people here from the UK. They say they will kick him out for taking us in, but we manage to shut the door. We still have not heard from the British Embassy.

AUGUST 18 The Taliban get into our house. They push my uncle about – all of the kids and mothers start crying and they leave. Some of the Taliban say they will kill me and my uncle. We have still not heard anything from the British Embassy. It seems such a long time ago we came here. So much has changed. When will we see our home in London again?

In shadow of Commons, victims praise Mail for campaign for REAL action

Scores of Afghan former translators for British forces accused the Government of betraying their families yesterday, demanding it met its ‘moral responsibility’ to rescue them from Taliban death squads.

Up to 80 protested outside Parliament along with former soldiers, warning MPs they were in a desperate race against time.

Their families were already being threatened, and one said fighters had gone to his Kabul home on Tuesday demanding to know where he was. 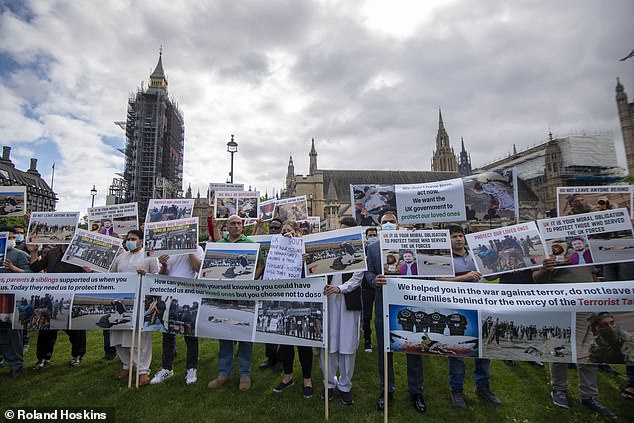 Sayed, 31, who worked for British forces for eight years, said: ‘The Taliban has not changed. It may say it has but… when the international presence has left in a few weeks we will see the old Taliban who will hunt and kill just as they have done before.

‘We are already hearing stories of killings and mistreatment of women.’

Many of the translators protesting yesterday had been helped by the Mail’s award-winning Betrayal of the Brave campaign, and there was applause for the paper.

Protest organiser Rafi Hottak said: ‘There are very few of us here who have not been helped by the Betrayal of the Brave campaign. Translators, their families and friends will never forget it. They have been our champions when others turned their backs and never given up on us.

‘Without them we would not have won many battles, some of us would not be here. I know they stand with us in the difficult days ahead. They continue to raise our voice so it can’t be ignored.’

Mr Hottak’s brother Latif, also an interpreter, is trapped in Kabul. He told the Mail yesterday how he was hiding from the Taliban, awaiting a flight to leave Afghanistan. 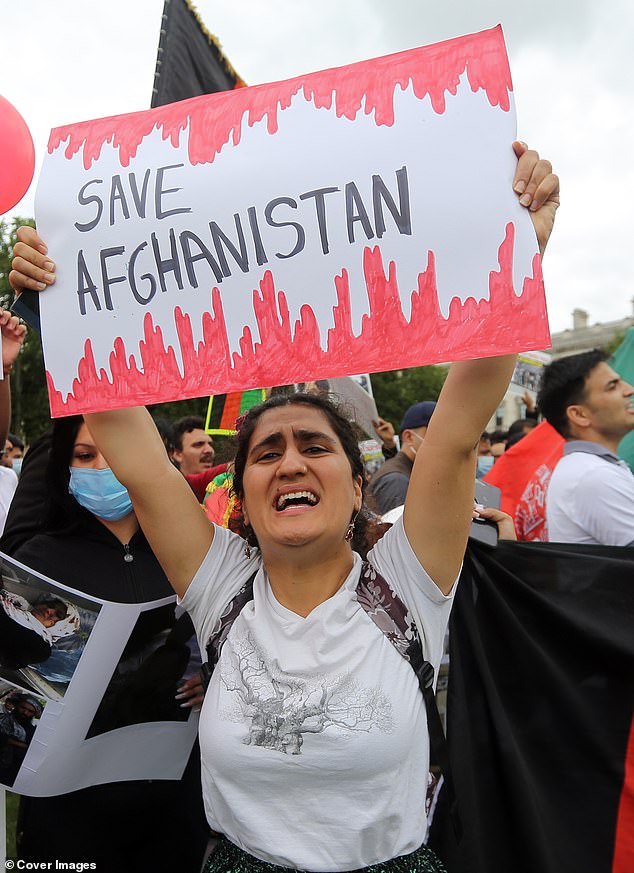 Up to 80 protested outside Parliament along with former soldiers, warning MPs they were in a desperate race against time

Banners showed photographs of murdered interpreters and those still awaiting sanctuary in the UK. Rafi Hottak said if the Government failed to act immediately, it would have ‘blood on its hands’. He added: ‘Our message to the Government is very simple – save our families who are at risk solely because of our work for British forces. It is action we need, not fine words. The situation in Afghanistan is becoming worse by the day.

‘Britain has a clear moral responsibility to act. Our families need to escape. My father and mother have been warned by neighbours the Taliban knows where they are and that their sons worked for British forces. My father has twice defied a Taliban court, so if they find him we know what will happen.’

Mr Hottak, who was in an explosion that killed a British soldier, cited the murder yesterday of the father of an interpreter for US forces as evidence the Taliban punished their families. The fathers of two British interpreters are also said to have been executed this year.

Mujtaba Raufi, 38, spent five years with the military and was helped by the Mail campaign.

He said: ‘The longer the Taliban remain, the greater the danger. They will have access to files and intelligence that point to our roles. It is a race the Government must win. There are too many dead translators and families, the Taliban will not have changed.’