Former candidate for Kentucky governor, 44, is arrested for ‘strangling a woman with an Ethernet cable and threatening to kill her’

A Republican Kentucky State Representative has been arrested after he allegedly strangled a woman with an ‘Ethernet cord from a kitchen drawer, and threatened to kill her’.

Robert Goforth, 44, was taken into custody around 3.10am on Tuesday after the anonymous woman went to the 911 dispatch center in London asking to speak with a deputy about ‘an alleged domestic assault that had just occurred with three small children still in the home’, police said.

Cops who responded to the center noticed the woman had visible marks on her forehead, neck and arms. Upon further inspection they witnessed bruising on her leg.

Robert Goforth, 44, was taken into custody around 3.10am on Tuesday after the anonymous woman went to the 911 dispatch center in London

The woman told them there had been an altercation and that she had been strangled during the incident.

Laurel County Sheriff’s Office deputies traveled to the residence off Blevins and Brown Road where the alleged incident occurred to check on the well-being of the children and noted they were safe.

‘The victim stated that this subject stated he was going to kill her,’ police said in a statement.

Police did not state the nature of the pair’s relationship. However Goforth has a wife and children.

Goforth was charged with strangulation in the first-degree; assault in the 4th degree, domestic violence – minor injury and terroristic threatening in the third-degree.

He was booked at the Laurel County correctional center and was being held on $25,000 bond. His initial court appearance was set for Wednesday.

Goforth dropped out of high school to help support his family, then earned his GED, served in the Army and went on to college. He became a pharmacist and opened a small chain of pharmacies.

Goforth was elected to the House of Representatives in 2018 and represents Jackson County as well as parts of Laurel and Madison – a rural section of eastern Kentucky. 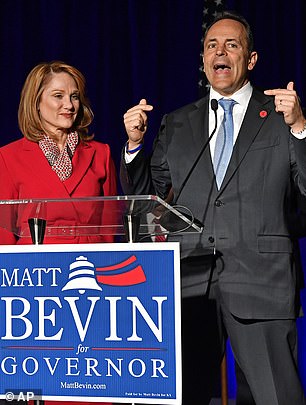 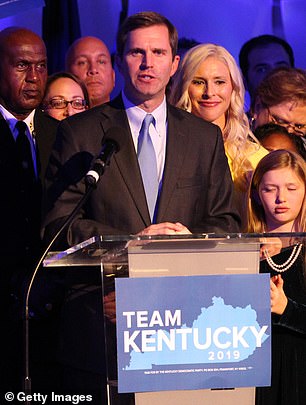 Goforth then-Governor Matt Bevin (left) as GOP candidate for the 2019 Primary. Bevin won the candidacy but lost the election to Democrat Andy Beshear.

He was a relative newcomer to politics when he challenged then-Governor Matt Bevin as GOP candidate for the 2019 Primary.

While running a woman accused Goforth of sexual assault.

Alicia Whitaker posted a petition saying Goforth wasn’t fit to govern as he is a ‘predator who feels entitled to women’s bodies’.

Whitaker claimed he forced her to have sex during work hours in an apartment over his Hometown Pharmacy on Bogle Street, and made her perform oral sex on his business associate Michael Ingram in ‘late 2008 or early 2009’.

At the time for the petition Ingram was serving an eight-year sentence for Conspiracy to Distribute Oxycodone and Money Laundering.

‘Over a decade ago, as an unmarried man, I had a brief, consensual relationship with Alicia Whitaker,’ Goforth said last January. ‘The allegations that I assaulted Ms. Whitaker are categorically false. I have never assaulted anyone.

‘My wife, Ashley, and I, do not take these allegations lightly and are troubled deeply by them. As a husband and father, sexual assault and violence against women sickens me, and I condemn any such acts in the strongest possible terms.’

Goforth obtained 40 percent of the vote. Bevin won the candidacy but lost the election to Democrat Andy Beshear.