A prominent former Kremlin advisor and advocate for Vladimir Putin who became a British citizen has died in London from a ‘stroke’.

The death of Alexander Nekrassov, 63, came as a ‘bolt out of the blue’, a British friend of the Soviet journalist said.

He was seen in his later years in Britain as an apologist and propagandist for Vladimir Putin, denying that Moscow was behind the assassination bid on ex-spy Sergei Skripal and his daughter Yulia in 2018.

In March of that year he clashed with Piers Morgan on Good Morning Britain over the Skripal scandal – refusing to clarify what Putin meant when he said ‘traitors will kick the bucket’.

Last month his son raised money for medics at The Royal Free Hospital in Hampstead who were dealing with the COVID-19 pandemic. 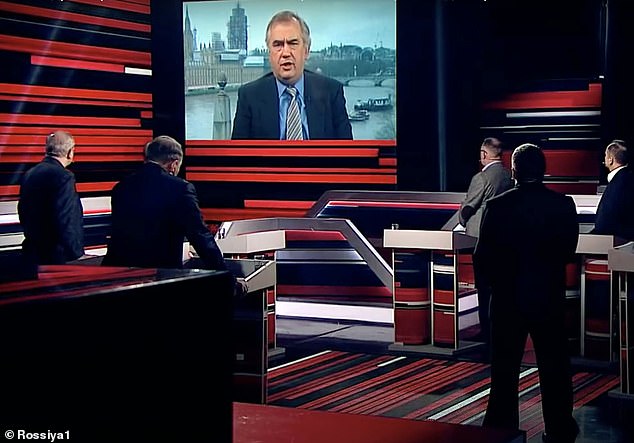 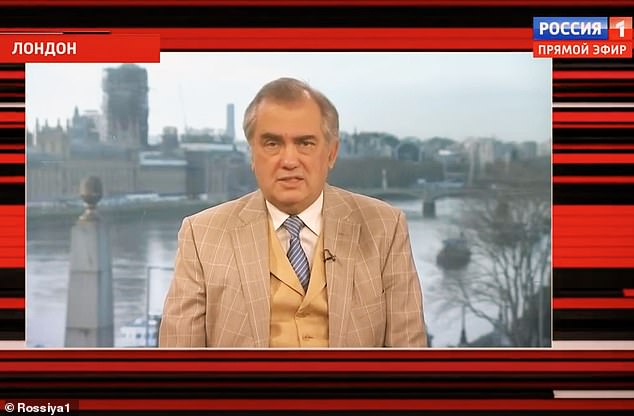 He said at the time on social media the hospital had ‘cared for my unwell father on many occasions and I cannot speak more highly of the people who work there and their commitment to their patients’.

His death was not due to coronavirus but from a stroke, according to a long-time British friend of the Russian, public relations executive Terry Franklin, who said the news was a ‘bolt out of the blue’.

Mr Franklin told MailOnline: ‘We first met in London in 1989 after the Soviet Union collapsed and have been great friends ever since. We did a lot of things together and the city was his home, he loved it here.

‘News of his death has been a complete shock and I will miss him terribly. He was a wonderfully outspoken person, sometimes controversial but always fair. He wasn’t an apologist for Putin, he just always wanted to get to the truth.’ 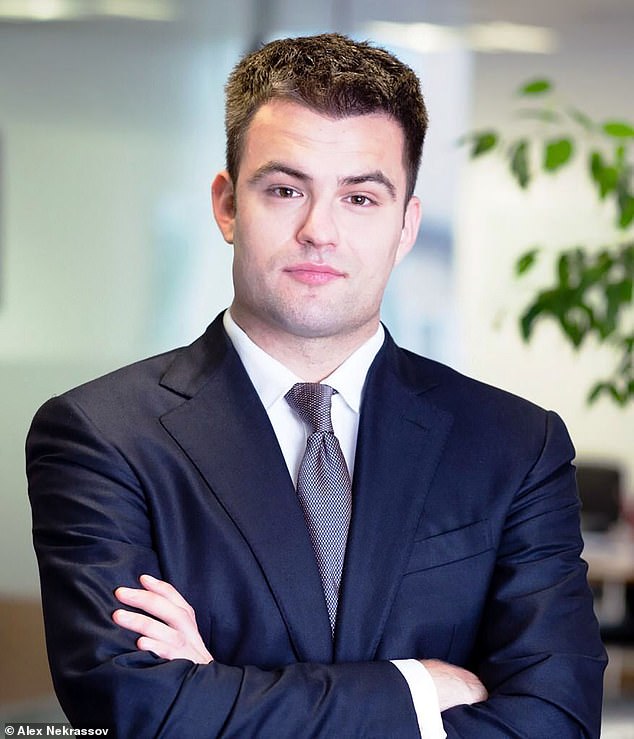 Alex Nekrassov, son of late Alexander Nekrassov, confirmed his father had died yesterday. Alex was born and raised in London and is a director at a leading PR agency

Nekrassov suffered a stroke earlier this week and was being treated at the Royal Free Hospital where he died.

His son, who was born and raised in London and is a director at leading public relations agency New Century, did not say specify when asked whether coronavirus was involved.

A Russian friend said: ‘It is with incredible sadness and heavy hearts that we announce that our friend and colleague has passed away.’

In recent years Nekrassov frequently worked as a pundit for Kremlin state TV both inside Russia and English language RT.

He was also often quoted by the British media. 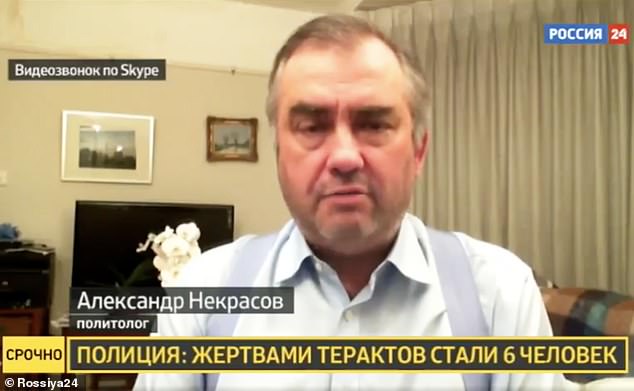 Alexander Nekrassov was seen in his later years as an apologist for Vladimir Putin. His is pictured (above) on air for Russian National TV from London 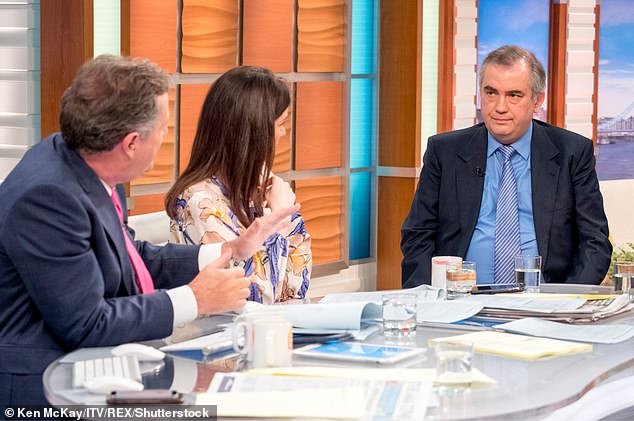 Nekrassov was seen in his later years as an apologist for Vladimir Putin, strongly denying that Moscow was behind the assassination bid on ex-spy Sergei Skripal and his daughter Yulia in 2018.

He suggested the attempted murder was a hoax, and contended there was no proof that weapons grade chemical weapons had been used in a bid to kill them by Russia. 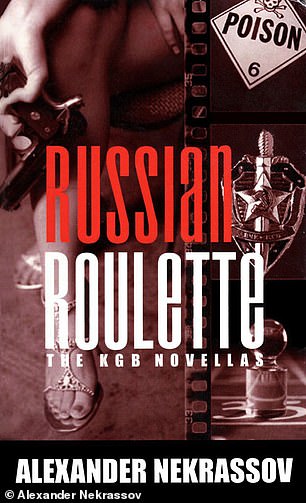 ‘Russia doesn’t have such means. We have destroyed all our chemical weapons under international oversight unlike some of our partners.’

In March 2018, he refused to answer Good Morning Britain host Piers Morgan 18 times when he was asked what Putin had meant by saying: ‘Traitors will kick the bucket. Trust me.

‘These people betrayed their friends, their brothers in arms. Whatever they got in exchange for it, those 30 pieces of silver they were given, they will choke on them.’

The same month Nekrassov called for Porton Down to be investigated over producing Novichok which was used in the attempt on the Skripals’ lives.

‘Every laboratory in the West including Porton Down has a sample of this so-called Novichok,’ he said.

The British government insisted it had clear evidence that the Skripals were targeted in Salisbury by GRU agents in an operation planned in Moscow.

In 2016 Nekrassov stormed out of an interview on the BBC’s Pienaar’s Politics over what he said was Western-led propaganda in reports from Syria.

He exploded when he was condemned for allegedly being paid by Russian officials to spread their side of the story.

He replied: ‘How dare you talk to me like that. This was not a discussion, this was an outrage.’ 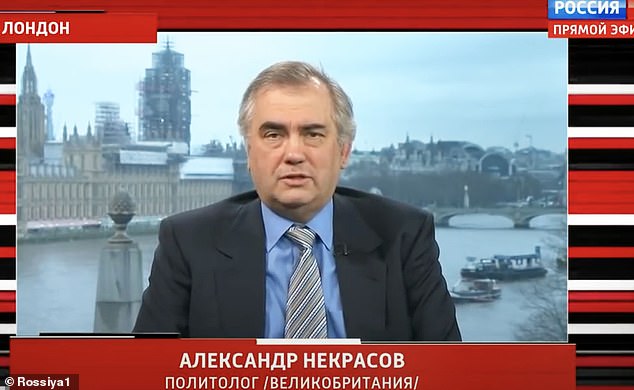 Alexander Nekrassov went on TV in Russia and Britain denying that Moscow was behind the assassination bid on ex-spy Sergei Skripal and his daughter Yulia in 2018. His is seen on air with a notorious talk show in Russia 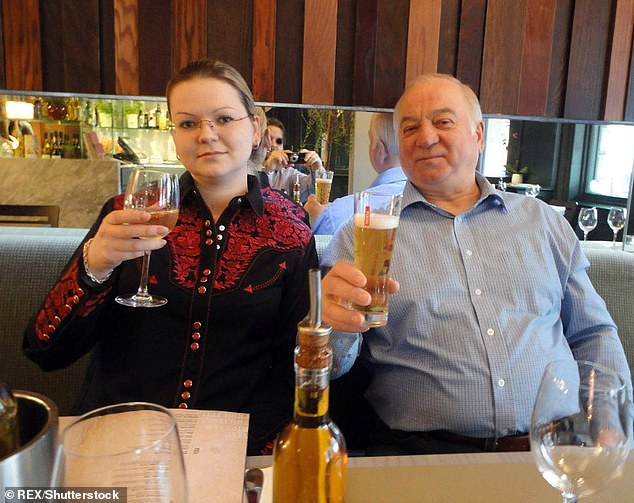 Former Russian spy Sergei Skripal and Yulia Skripal. He was left critically ill after suspected poisoning in Salisbury in 2018 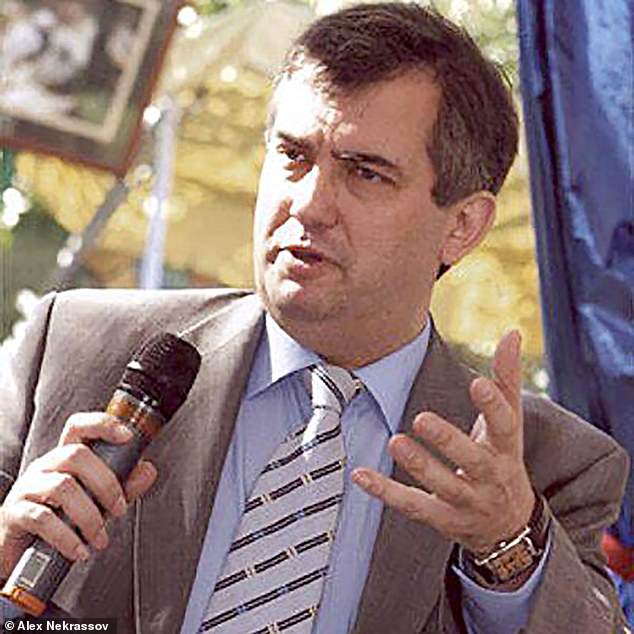 Earlier in 2005 Nekrassov had claimed that Putin’s strongman image was ‘conjured up by his spin-doctors, most of whom had worked for Yeltsin, is a ploy to fool the Russian people and not the West’.

He said in a letter to The Spectator in 2005: ‘Putin was plucked from obscurity and installed in power by President Boris Yeltsin for one reason only – to preserve the existing status quo in Russia for as long as possible and with every means possible.’

Two years later he told the New Statesman: ‘Putin is getting some serious support from the West, because the more the west criticises Putin, the more his popularity in Russia grows.’

He claimed at the time Putin was the West’s puppet dubbing him ‘a grey nonentity with a deep inferiority complex [who] was plucked from obscurity and installed in the Kremlin for the sole purpose of safeguarding the business interests of Yeltsin’s family and Yeltsin cronies.’

By 2009 he lauded Putin’s macho man image, and seen was vocally supporting the Kremlin leader from his Highgate exile.

‘Putin has been snapped fishing shirtless, hunting shirtless. Most Russians don’t laugh at such vanity – they lap it up,’ he said.

‘What it shows here is that he is fit, he’s strong, he’s not a drinker – and that’s a problem in Russia – many men are alcoholics. 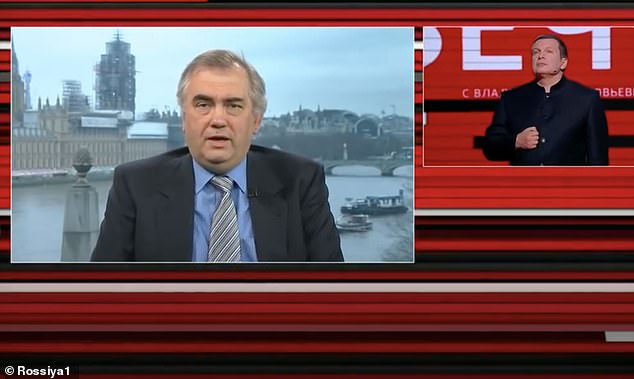 Nekrassov frequently worked as a pundit for Kremlin state TV both inside Russia and English language RT. He is seen (above) on air with TV host Vladimir Solovyev (right) 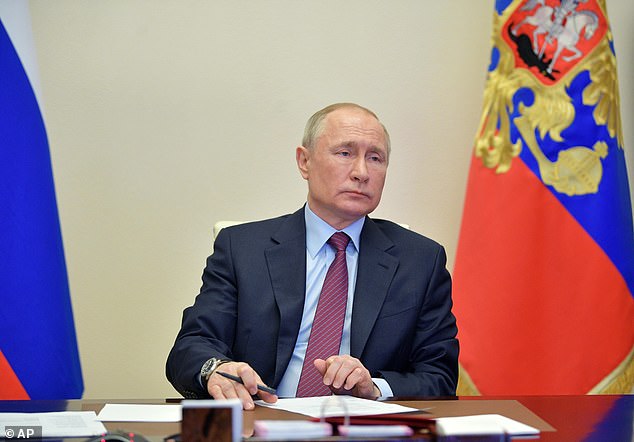 Russian President Vladimir Putin, takes part in a video conference of Russian space industry today. Nekrassov claimed in 2005 that Putin’s strongman image was ‘conjured up by his spin-doctors’

‘Putin’s predecessor, Boris Yeltsin, was no stranger to the bottle. And in a country where a man’s life expectancy is just 59…Putin’s purposely public machismo is impressive.

‘Volleyball, skiing, blacksmithing. He rides in submarines and fighter jets. He bowls. He tranquillises tigers.

‘A leader of a nation with nuclear weapons cannot be a weakling. Completely, he is a tough guy.

‘Apparently Putin must take his shirt off to prove to voters he is tough enough.’

Last year he blasted the British election campaign as the most ‘ridiculous’ he has seen in 30 years in the UK.

Boris Johnson would appoint ‘the same grey party apparatchiks who don’t want to and can’t do anything and only have pound sterling signs shining in their eyes’, he told Russian TV viewers. 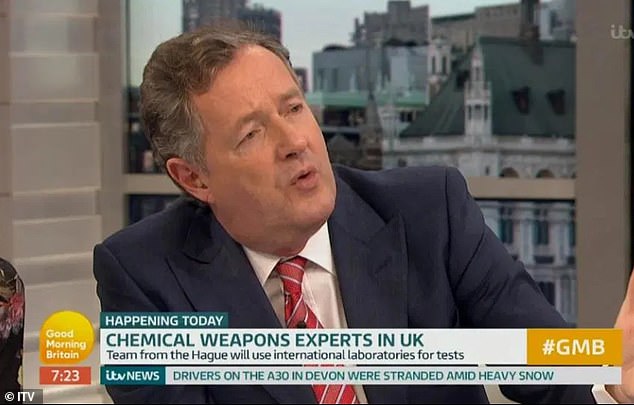 In March 2018, Nekrassov refused to answer Piers Morgan 18 times when he was asked what Putin had meant by saying: ‘Traitors will kick the bucket. Trust me.’

He slated acting prime minister and foreign secretary Dominic Raab as a ‘Russophobe who hates Russia’.

Nekrassov came to London as a child when his father was posted to Britain.

Later he studied international relations at the Moscow State University before starting his professional career at TASS, the Soviet press agency.

He was subsequently promoted to the position of London Political Correspondent before the end of the Soviet era.

In the 1990s he served as an advisor to the Kremlin, travelling the world as a troubleshooter for Moscow before later settling in London.

Nekrassov was a former student of Moscow State University for International Relations, where he read politics, international law and economics.

After graduating, he worked as a journalist for Russian state news agency TASS, first as a news reporter and then covered politics.

In 1989 he was transferred to its London office, where he covered major events in Britain and across Europe but left full-time journalism in the mid 1990s to take up a job as an adviser in the Kremlin, although he continued to be based out of the capital.

Former Russian deputy foreign minister Georgiy Kunadze in 2018 branded Nekrassov a ‘mastodon of Soviet propaganda’, suggesting his career path was similar to that of a spy.