Former Labour MP Gisela Stuart savaged Jeremy Corbyn’s Brexit plan today as she stood alongside Boris Johnson and Michael Gove to urge Leave voters to back the Tories at the general election.

Ms Stuart, chairman of Vote Leave during the EU referendum in 2016, reunited with campaign stalwarts Mr Johnson and Mr Gove and warned voting for Labour on December 12 would ‘put Brexit at risk’.

She argued voting for the Conservatives next month ‘does not make me a Tory’ and insisted it is the ‘best option’ for all Brexiteers who want to ‘finish the job’ and see Britain split from Brussels.

Ms Stuart is a long-time Eurosceptic and she stepped down as a Labour MP at the general election in 2017.

Her comments this morning represent a hammer blow to Mr Corbyn’s hopes of getting his election campaign back on track.

Labour is shifting its campaign approach after a poll suggested the party is on copurse to get crushed by the Tories at the ballot box.

Labour is expected to spend the next two weeks trying to persuade Leave voters in its heartlands not to abandon the party.

But the Tories are likely to capitalise on Ms Stuart’s backing and cite her comments to those voters as evidence that Mr Corbyn cannot be trusted on Brexit.

Gisela Stuart, a former Labour MP, today urged Leave voters to support the Conservative Party at the election on December 12 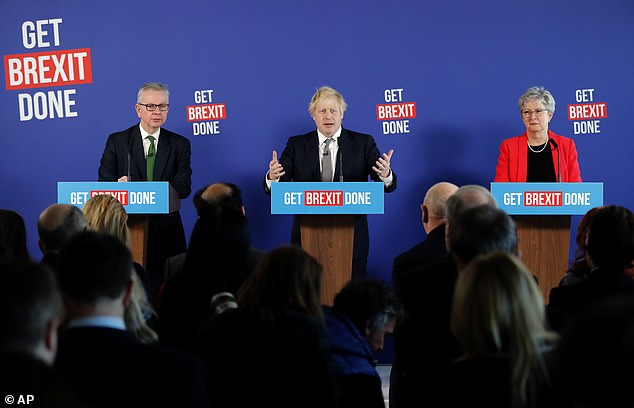 Speaking next to Mr Johnson at an event in London, Ms Stuart said: ‘Brexit has not happened because Labour, the Lib Dems and others have done everything they can to frustrate, delay and overturn the referendum result.

‘Labour have voted twice to delay Brexit. The Labour leadership, the shadow cabinet and most Labour MPs do not believe in Brexit and Labour’s proposed Brexit deal is so bad that not even Jeremy Corbyn can bring himself to support it.

‘That means Leave voters have a clear choice at this election: Put Brexit at risk with Jeremy Corbyn or get Brexit done with Boris Johnson and we must get Brexit done – there is too much at stake.’

Ms Stuart also took aim at Mr Corbyn’s handling of Labour’s anti-Semitism crisis as she said she was ‘devastated by the rise of anti-Jewish racism’ in the party.

The former MP for Birmingham Edgbaston said she still held ‘Labour values’ but while she had not changed, the party had.

She claimed the Labour of John Smith, Tony Blair and Gordon Brown was gone ‘at least for now’ as she delivered a plea to the party’s voters who she said feel torn between loyalty to the party and to their country.

Urging them to ‘set aside party allegiance’, Ms Stuart said: ‘We can bring the country back together again and we can unite but that is not by voting for Jeremy Corbyn.’

She added: ‘In this election I will  not vote for Jeremy Corbyn but I can vote for Brexit.

‘This is after all the Brexit election and a vote for Boris Johnson this time around is a vote to get Brexit done.

‘But let me be clear: Voting for Brexit this time does not make me a Tory now or in the future.

‘Rather it is the best option for all those who like me still share Labour’s traditional values but who voted to Leave and they want certainty, they want an end to stagnation, an end to division and an end to delay.

Mr Johnson used the event in London today to set out his ‘Brexit roadmap’ which included plans to introduce a new state aid regime once the UK has left the EU.

It would make it easier for the government to intervene and save jobs when industry gets into trouble. EU rules currently make this difficult. 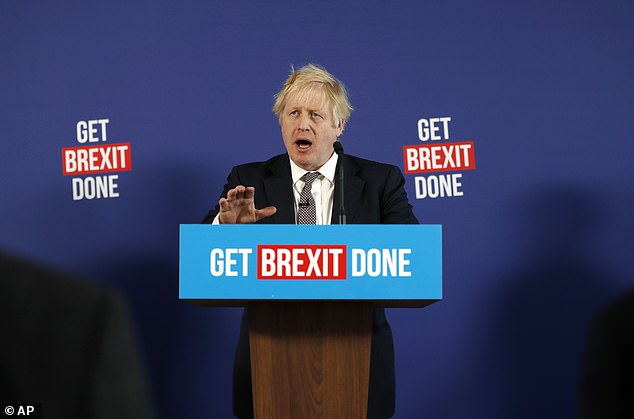 The Prime Minister also outlined plans to bring in a new ‘buy British’ rule for public bodies in a bid to boost the UK farming industry.

The rule will require public organisations to buy British produce ‘as much as possible’.

The Tories said that the UK’s membership of the EU had meant ‘we have not been able to support British produce within public procurement’.

The Prime Minister said: ‘If we are returned with a majority government we will leave the EU on 31 January and immediately get to work on unleashing the benefits of Brexit.

‘People voted to take back control – and we want to deliver that change. One of the crucial ways we will do that is by improving our rules so that we can back British businesses and unleash their true potential.’