By Press Association Reporter and Michael Searles For Mailonline

Notts County have announced the appointment of Harry Kewell as their new manager after agreeing a compensation fee with Crawley.

The former Leeds and Liverpool forward was appointed by Crawley in May 2017 and led the club to a 14th-placed finish in Sky Bet League Two last season.

Kewell replaces Kevin Nolan after he was sacked with Notts County bottom of the Football League.

The Australian will be joined at Meadow Lane by assistant Warren Feeney, while the Magpies are on the verge of appointing a ‘vastly experienced’ technical director.

BT Sport commentator Darren Fletcher is to stand down from his role as vice-chairman at the club,

Fletcher was appointed to the board of directors last January after Alan Hardy bought the club. He was then made vice-chairman in June, but the pair have now decided to go their separate ways. 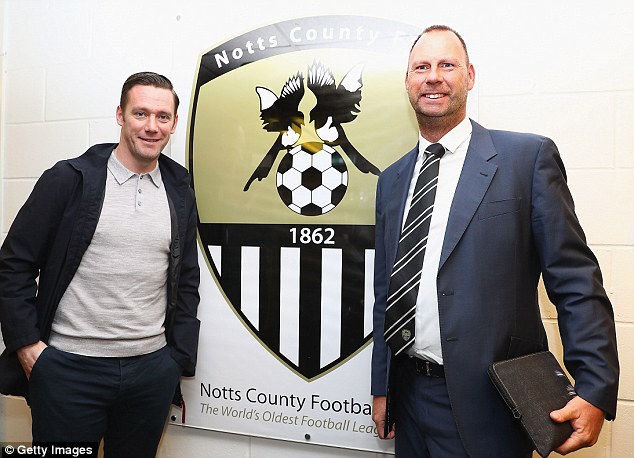 Hardy, who is also the chairman, told nottscountyfc.co.uk: ‘Having now worked in football for a significant period of time, I have had the opportunity to learn from other clubs what good looks like.

‘I have therefore decided to appoint a technical director, who will set the club’s overall footballing philosophy and be on hand to support and mentor the manager as required.

‘Harry will, however, be solely responsible for our first-team squad, having the final say on transfers, tactics and team selection.

‘He has enjoyed an excellent start to his managerial career and I am hugely impressed with his knowledge and attention to detail.’

Hardy has also thanked Fletcher for his ‘tireless effort and support’ during the club’s transitional period.

He said:  ‘Darren and I have come to a very amicable agreement that it would be best to part ways.

‘He will remain a close personal friend of mine and I thank him for the tireless effort and support he gave to me.’

Notts County will face 12th place Forest Green on Saturday as they look to pick up their first win of the season.