A former member of a white supremacist ‘cult’ has detailed how she was degraded and threatened when she tried to leave the movement, saying she was told she ‘could probably hold a lot of Nazi semen and birth a lot of Nazi babies.’

Samantha, who refrained from using her last name, shared her story during an interview with CNN correspondent Elle Reeve, which appeared on the latest episode of the network’s videos series Reality Check with John Avlon: Extremist Beat.

She said her former boyfriend first introduced to the alt-right group Identity Evropa, which has since rebranded itself as The American Identity Movement.

‘I think alienation is the number one reason that people joined,’ she said. ‘I was seeing this guy, and I was going through a lot of turbulent, emotional, and just personal mental things where my sense of self was pretty damaged.’ 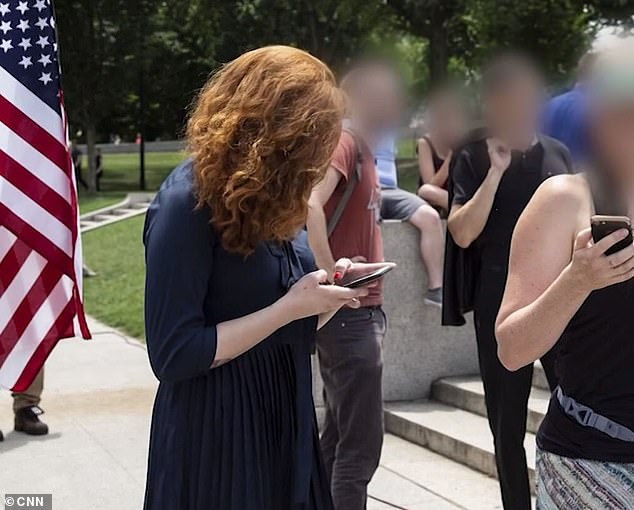 Looking back: Samantha (pictured at an event) said her former boyfriend introduced to the organization, which has since rebranded itself as The American Identity Movement

Identity Evropa was presented to her as being a clean-cut, all-American group, and she admitted she was ripe for brainwashing.

‘It was just this immersion into the culture of it with someone that I so badly wanted the affection of and the approval of. It didn’t take much,’ she recalled. ‘It’s not as if this person was like, strapping me down, I was hungry to learn. I was hungry to figure this out.’

Reeve explained to Avlon that Samantha saw great success in the alt-right group and was put in charge of the women’s committee. She ended up dating a high-level person in the organization, but he was allegedly cruel to her.

When she and her boyfriend broke up, he wouldn’t move out. She realized that she needed to leave Identity Evropa in order to completely cut him out of her life.

Samantha said she was crudely degraded and threatened when she made her intentions to leave the group known. 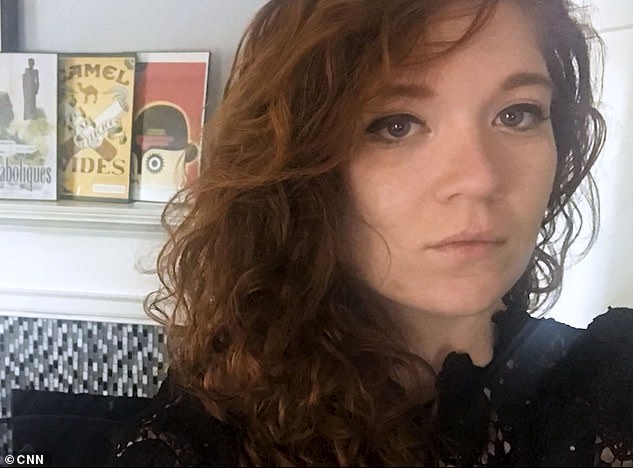 Hard to handle: Identity Evropa was presented to her as being a clean-cut, all-American group, and she admitted she was ripe for brainwashing 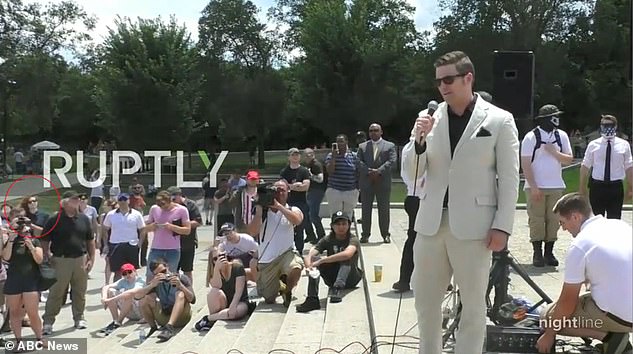 Past: Samantha (circled on the left) said her ‘sense of self was pretty damaged’ when she got involved with the group, and she eventually became the head of the women’s committee

‘I was told a lot that I would be really good,’ she recalled, ‘that I could probably hold a lot of Nazi semen and birth a lot of Nazi babies — whether I liked it or not. That they would break my legs so that I couldn’t run away. And then I would just be killed afterwards.’

Samantha was frightened, but the threats only made her more determined to extricate herself from the group. She left Identity Evropa in October 2017, a few months after the Unite the Right rally in Charlottesville, Virginia.

Members of Identity Evropa were among the participants at the event, where an alt-right protester plowed his car into a crowd of counter-protesters, killing activist Heather Heyer.

‘All of the weird propaganda that I was buying into, all of the ideology and the rhetoric, it just immediately hit me that it was all bulls**t,’ Samantha told Reeve. ‘It just all hit me how much of an idiot I was.’

The American Identity Movement told CNN it is unaware of anyone being coerced to stay in the organization. 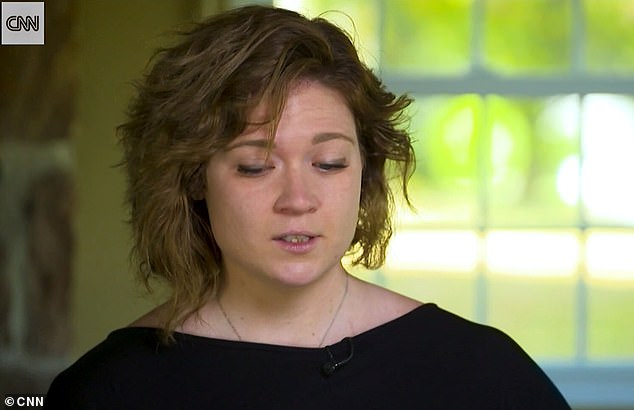 Harassment: When she decided to leave the group, she said she was degraded and threatened 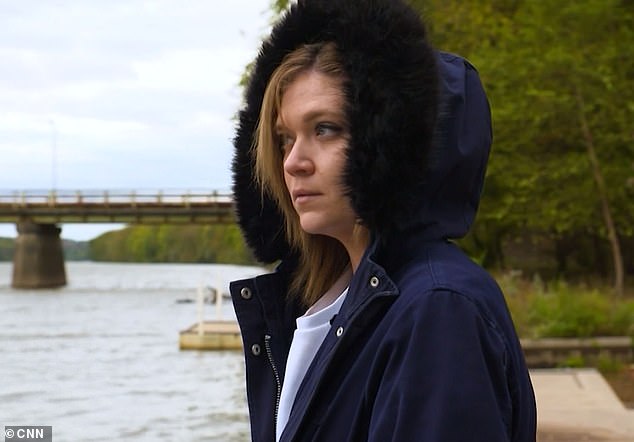 Scary: Samantha said she was told she ‘could probably hold a lot of Nazi semen and birth a lot of Nazi babies,’ whether she liked it or not

Samantha is now a member of an organization that helps people leave hate groups, and she hopes her story will save others.

She first opened up her experience with Identity Evropa in an interview with Nightline in October 2019, admitting she was converted to racism.

‘When you’re in there, you think that you just know the truth…[that] white people are more intellectually capable than other people… White people were the best,’ she said.

‘I never thought of myself as a racist person, but I was,’ she added. ‘I started to believe that…there is some sort of white genocide happening.’

Samantha said that when she joined Identity Evropa she thought of it as being ‘just pro-white’ and didn’t see it as a hate group. 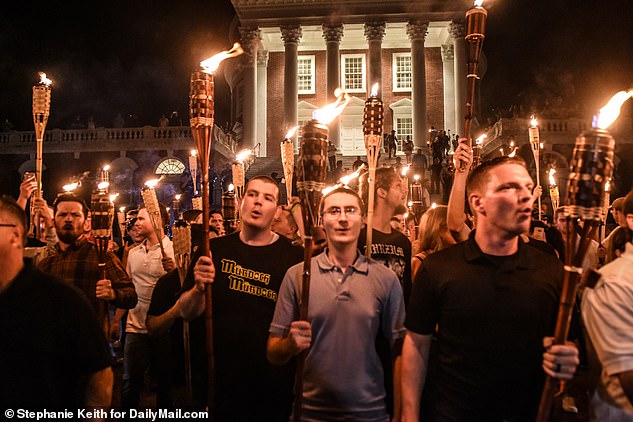 Done: Samantha left Identity Evropa in October 2017, a few months after activist Heather Heyer was killed at the Unite the Right rally in Charlottesville, Virginia (pictured) 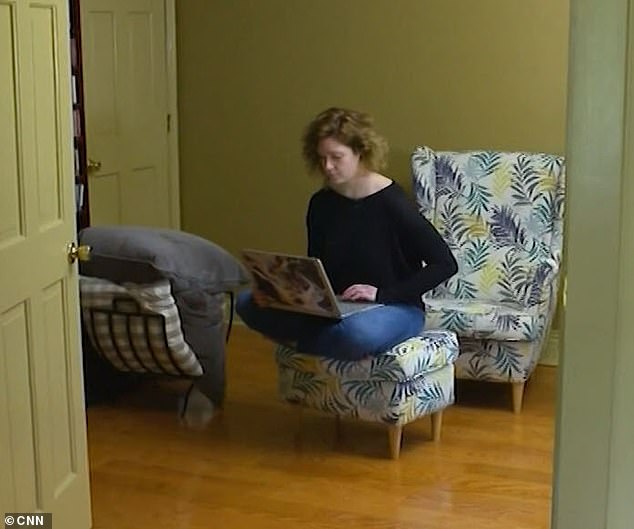 Using her voice: Samantha is now a member of an organization that helps people leave hate groups, and she hopes her story will save others

‘It’s absolutely a hate group,’ she stressed. ‘Anyone that’s in there doesn’t think they’re racist. No one thinks that they’re anti-Semitic. I think the term that was used, or that started to be used, was “counter-Semitic” or something, which is also bulls**t.’

Samantha said she didn’t think she was doing anything wrong at first, but then she was performing Nazi salutes on command.

‘I remember I was at a party, it was at some group’s house, and, you know, in walks one of the leaders of the movement and someone shouted for everyone to be quiet,’ she recalled. ‘He said, “Sieg.” Pretty much everyone raised their hand and said, “Heil.”

‘It happened one or two times, and then, by the third time, I did it. I knew it was wrong. I remember being really apprehensive in the sense of…it was not a good look. But I did it. Everyone else was doing it.’

When she left the group after the Unite the Right rally, she moved out of the area where she had been living. 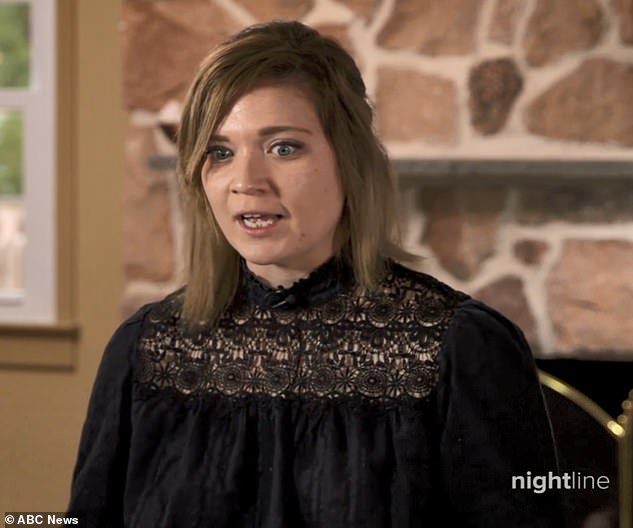 Speaking out: Samantha first opened up her experience with Identity Evropa in an interview with Nightline in October 2019, admitting she was converted to racism

‘I met a few people that kind of challenged me and held me accountable for my beliefs and countered them,’ she said.

Identity Evropa has since re-branded itself as the American Identity Movement, according to the Anti-Defamation League.

Now, Samantha wants others to know how prevalent white supremacy is.

‘People need to understand that…it’s not the kid in Wyoming who grew up with gas station beer and a toothless father who becomes [involved in a hate group],’ she said. ‘It is your mailman, it is your surgeon, it is your doctor, lawyer. It is everyone.’

Her story is among those included in Anti-Social: Online Extremists, Techno-Utopians, and the Hijacking of the American Conversation, a book written by New Yorker journalist Andrew Marantz.