Mrs. Florida is headed to prison for stealing her dying, bed-ridden mother’s Social Security checks – crushing her dream of becoming a Real Housewife.

It’s a sexy headline, says ex-beauty queen Karyn Turk, mom-of-four and socialite wife of a well-known lawyer, but she tells DailyMailTV that her upcoming sentence doesn’t reflect what really happened.

Turk, 47, who along with being Mrs. Florida 2016 is also a conservative political commentator who rubs elbows with the likes of Donald Trump and Rudy Giuliani, tells DailyMailTV that she only stole the checks to pay for her mother’s private full time aide.

Turk pleaded guilty in September to stealing $17,320 worth of Social Security checks from her mother. Turk paid back $46,000 and is expected to spend most of the month of March in a prison camp located in the swampy Everglades.

The checks should have been going to the Finnish-American Village, a nursing home in the West Palm Beach suburb of Lake Worth, where Turk’s mom, retired New Jersey housewife Ilse Schafer, spent four years until her death June 10, 2019 at the age of 83. In December, Finnish-America filed a lawsuit against Turk that claims she still owes them $220,000 for her mother’s care.

But now Turk is hitting out against the nursing home in a lawsuit, claiming they neglected her mother and are responsible for her death and says that’s why she refused to pay the home for their services.

Former Mrs. Florida Karyn Turk, 47, was sentenced this month to jail time and house arrest after she pleaded guilty to Social Security Insurance fraud for stealing from her mother 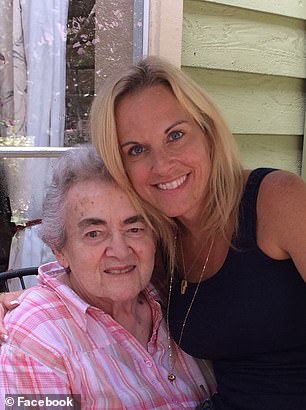 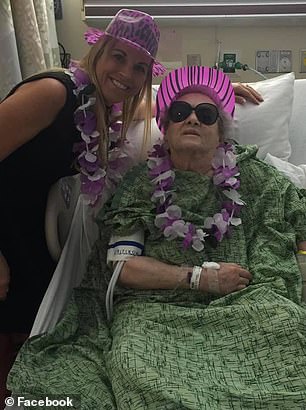 She confessed to taking the money from her dying, bed-ridden mother’s Social Security but tells DailyMailTV it was to pay for a private full-time aide. She’s pictured with her mother Ilse Schafer, who died in June at the age of 83 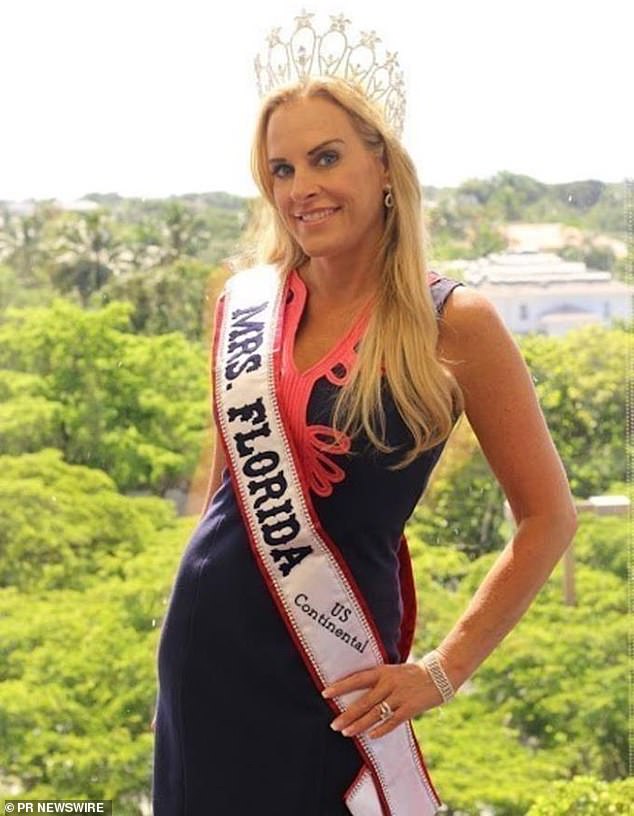 Turk was Mrs. Florida in 2016 and works as a conservative commentator having rubbed elbows with the likes of Donald Trump and Rudy Giuliani

In an exclusive interview with DailyMailTV in her Boca Raton dockside condo, Turk said there’s a back story to her descent from conservative talk-show personality and potential reality TV star to bottom-of-the-barrel nickel-and-dime thief.

And at times, that story makes her sound like her political hero, President Donald Trump. 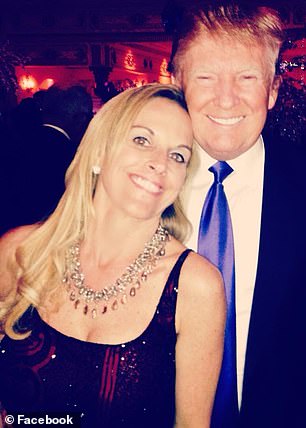 Turk is a conservative commentator who is often pictured with Republican figures in Palm Beach, such as this 2018 photo with President Donald Trump

‘It’s a conspiracy and a witch hunt,’ she says. ‘The story on how I could end up in prison – I just filed my appeal, by the way – started when I complained about my mother’s treatment in her nursing home.

‘The nursing home administrators knew my mother’s death was going to be a problem, so they figured they’d discredit me and create a false narrative to save themselves from scrutiny.’

A court-appointed guardian accused Turk of using her mother’s Social Security checks to promote her dream of appearing on ‘The Real Housewives of Palm Beach’ and to garner publicity.

The guardian accused Turk of using the money to rent large homes and buying tables at fancy equestrian events.

At 83, Turk’s adoptive mother Ilse Schafer suffered from a series of ailments, including respiratory problems and dementia, and she was bed-ridden.

But degenerative diseases that couldn’t be blamed on anyone, Turk says, is just a part of what killed her.

‘What killed her is neglect,’ Turk says, ‘Neglect that caused nine bed sores on her back and legs.

‘One of the bed sores on her back got so bad that you could see the vertebrae from her spine through a gaping hole in her flesh.

‘They were gaping holes that the nursing home staff just filled with cotton.

‘My mom was in excruciating pain when she died, and folks at the nursing home didn’t lift a finger. They actually tried to hide it by attempting to have her cremated. But I managed to get the body and an autopsy by a private doctor.’

Turk provided photos to DailyMailTV of her mother’s wounds taken about a month before she died, saying ‘they speak for themselves.’

According to the private autopsy that Turk paid for, Schafer died of respiratory failure caused by pneumonia and bronchitis. The report also mentions ‘infected decubitus ulcers (bed sores) and dementia’ were ‘contributing causes.’

Turk filed a lawsuit against the nursing home in early September, according to Palm Beach County court records, alleging that the staff failed to monitor her mother’s health properly and neglected her care as bed sore developed into open wounds that made her body more vulnerable to infections.

Bed sores, according to Florida health regulators, can be ‘very painful’ and ‘extremely difficult to heal.’

They’re usually caused by breakdowns in the skin that touches bed sheets in the same way for long periods of time.

They’re also avoidable, and the number of patients with such injuries is used by regulators to judge the level of care in a nursing home. 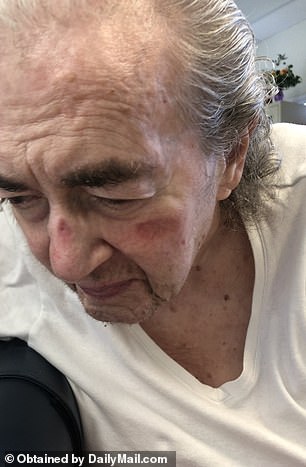 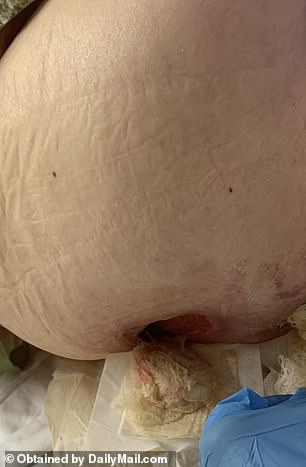 WARNING GRAPHIC CONTENT: Turk claims the West Palm Beach nursing home is responsible for her 83-year-old mother’s death and says the staff neglected her. She provided pictures showing her mother with a mark on her head and deep bed sores 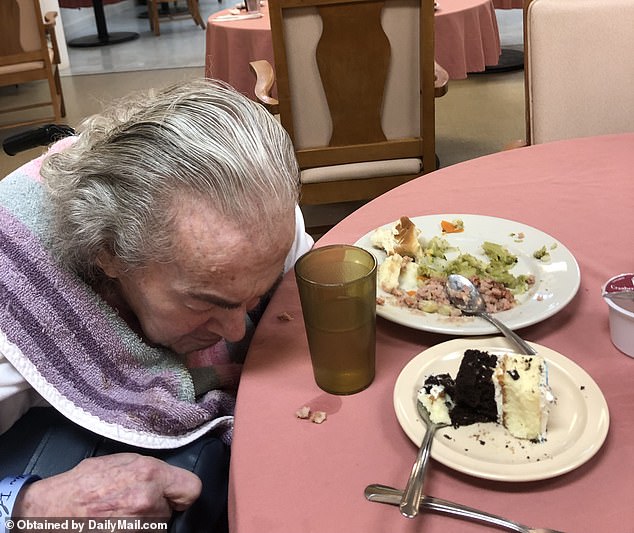 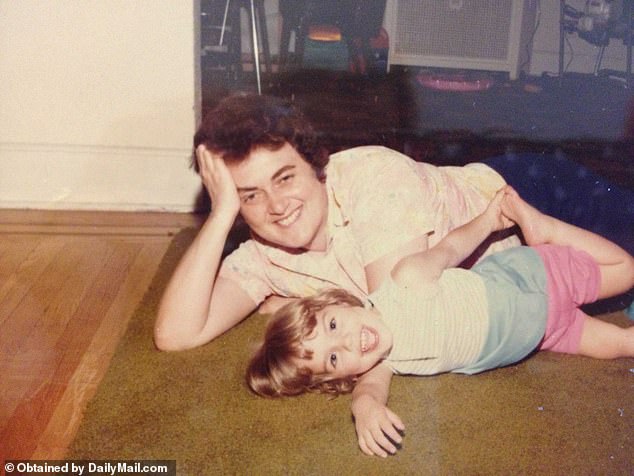 ‘I made mistakes,’ she said. ‘Legally, I should have automatically forwarded the checks to the nursing home. I just didn’t like how they were treating her’ She provided this photo of her and mother from childhood 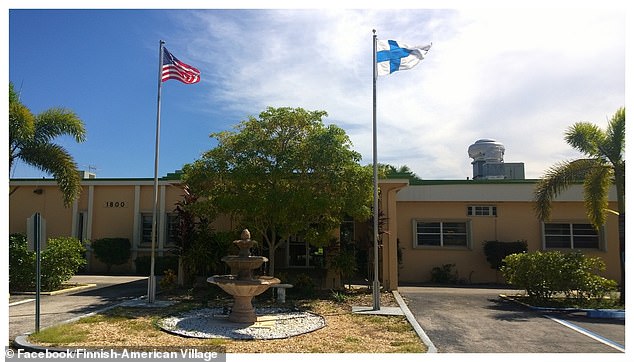 Turk claims the Finnish-American Village, a nursing home in the West Palm Beach suburb of Lake Worth, neglected her mother who lived there for four years

Finnish American was on the state’s nursing home watch list since July 2017, according to the Agency of Health Care Administration, because, in some instances, it didn’t meet the minimum standards of elderly care, according to the agency’s website. 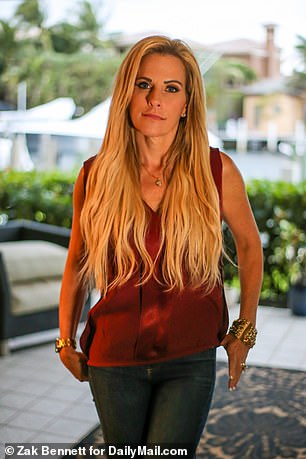 State inspectors gave the nursing home a one-star overall rating, out of a possible five stars. They gave one star for its quality of care, two for quality of life and one star for ‘pressure ulcers.’

‘It’s false,’ said Daniel Benson, the facility’s executive director and chief financial officer, when asked about the low ratings and probation. ‘We’re not commenting on anything that has to do with Karyn Turk.’

Later, Benson emailed a statement that read: ‘The 2017 citation was for an isolated incident which has no bearing on this case, but unfortunately still affects our star rating. Mrs. Turk is again attempting to redirect attention from the crime she committed. Due to ongoing litigation, we cannot comment any further.’

As bad blood festered between Turk and the nursing home’s administration, she said Benson even took to writing a letter about her to local U.S. Congresswoman Lois Frankel.

His email to Democrat Frankel obtained exclusively by DailyMailTV shows Benson asking for further investigations into Turk after she copped the plea to a misdemeanor. 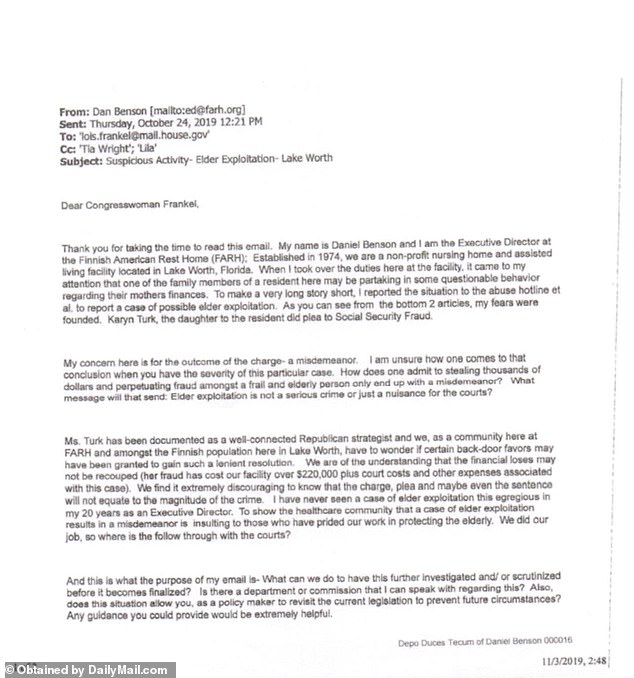 Daniel Benson, the facility’s executive director sent an email to Democrat Frankel obtained exclusively by DailyMailTV that shows Benson asking for further investigations into Turk after she copped the plea to a misdemeanor 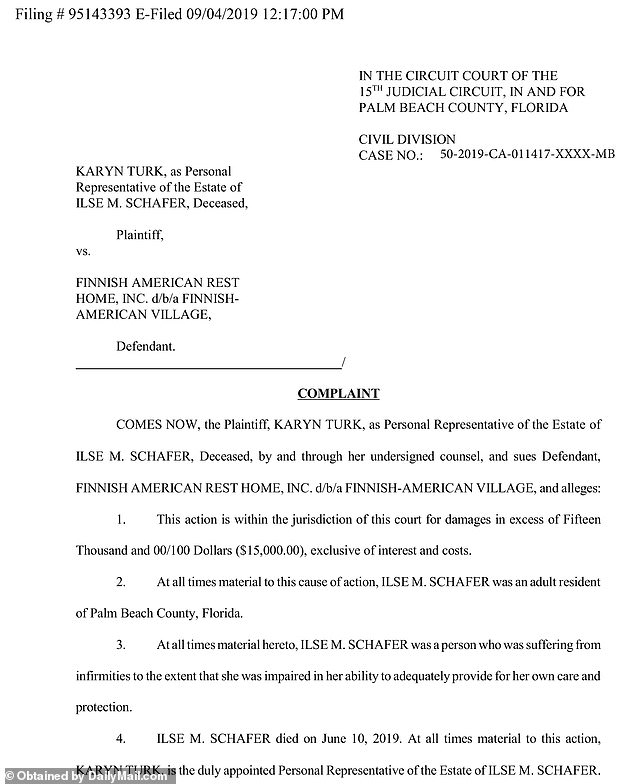 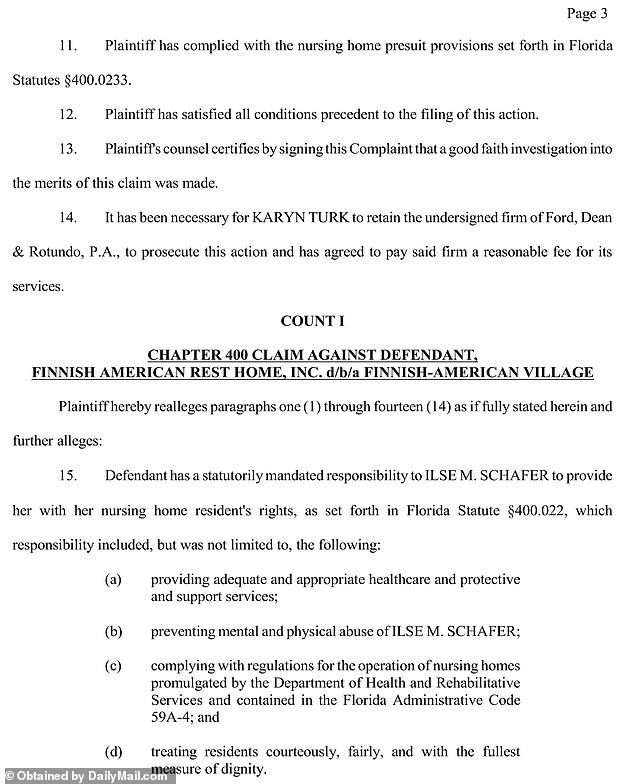 Benson wrote he worried that Turk benefited from her Republican connections and that ‘the sentence will not equate to the magnitude of the crime.’

According to news reports, six employees of the nursing home attended Turk’s sentencing on January 10.

‘They were actually lobbying the federal government to discredit me when I was already down,’ she said.

Turk, meanwhile, doesn’t dispute the facts that are likely to land her in prison camp despite her lack of a criminal record.

She is also scheduled to serve five months on house arrest and serve 100 hours of community service.

‘I made mistakes,’ she said. ‘I was using my mother’s checks to pay for a private full-time aide to be with my mom at the nursing home. That stuff is expensive.

‘Legally, I should have automatically forwarded the checks to the nursing home. I just didn’t like how they were treating her.’ 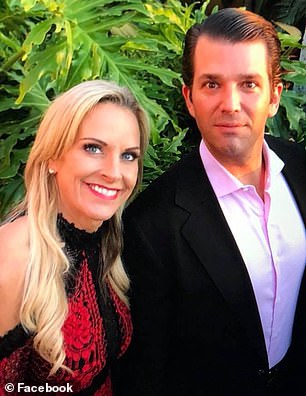 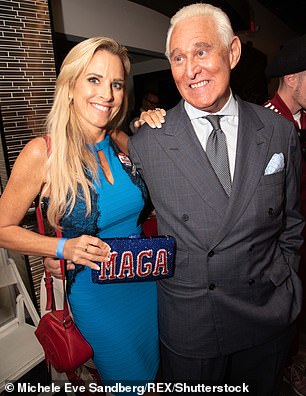 Turk and Don Trump Jr strike a pose in 2018. Turk and Roger Stone are seen at an October 2018 event. She is a staunch supporter of the former Trump campaign advisor, who awaits sentencing on federal convictions 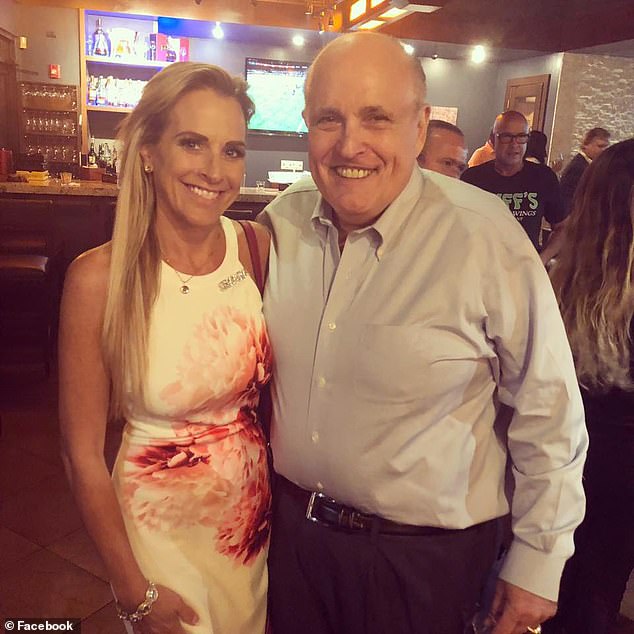 She said she’s paying for the crime in more ways than her sentence.

In December, Finnish-America filed a lawsuit against Turk that claims she still owes them $220,000 for the care of her mother.

Her social standing that made her a regular at Mar-a-Lago, President Trump’s private club, is now in question.

And people who recognize her from the media coverage of her sentencing look at her with a hint of disgust.

‘In my neighborhood and my condo building, I can see little old ladies looking at me sideways,’ Turk said. ‘One even clutches her purse when I walk by.