A former NHL star nearly died and needed multiple organ transplants after he was pricked by a cactus.

Lyle Odelein, whose career spanned two decades, was playing golf with friends in Phoenix, Arizona, when he went into tall grass to retrieve a ball.

That’s when a ‘jumping cactus’ – a part of the plant that detaches at the slightest touch – became wedged in the 50-year-old’s leg, reported the Pittsburgh Post-Gazette.

Odelein and his friends were able to pull it out but just one week later, after complaining of leg plain and experiencing flu-like symptoms, he was in a hospital in Pennsylvania, where he lives.

Doctors told his family he was suffering from a life-threatening blood infection – likely caused by the cactus – that was shutting down several organs and, unless they could find donors, he had a five percent chance of survival. 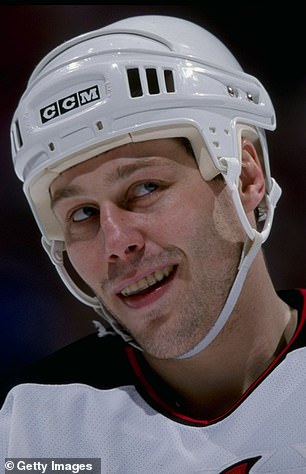 Former Montreal Canadiens defenceman Lyle Odelein, 50 (left and right, in 1999), was playing golf with his friends in Phoenix, Arizona, in March 2018 when he was pricked by a ‘jumping cactus’ – a part of the plant that detaches at the slightest touch 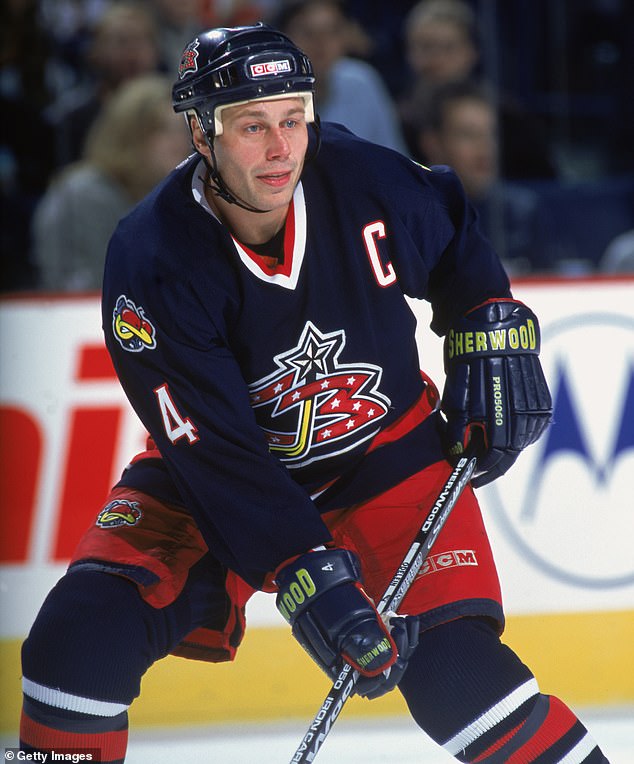 One week later, Odelein went to Allegheny General Hospital near his home in Pittsburgh, Pennsylvania, after complaining of leg plain and experiencing flu-like symptoms. Pictured: Odelein in October 2001

It’s not clear whether a bacterium, a virus or a fungus caused Odelein’s infection.

However, a 2017 study led by the Mayo Clinic Hospital in Phoenix looked at infections from thorn injuries in Arizona.

The researchers found that the most common cause was Stapphylococcus aureus, a common type of bacteria found on the skin and the leading cause of skin and soft tissue infections such as abscesses, boils and cellulitis.

But, in some cases, the infections were caused by Nocardia, bacteria which is found  in soil and water; Aspergillus, an airborne fungus; and P lilacinum, bacteria that is found in forests, grasslands and deserts.

Odelein was placed in medically-induced coma so doctors at Allegheny General Hospital could examine how serious the infection was.

They found that the infection had severely damaged his aortic valve, which closes to hold blood before it is pumped and opens to allow blood to leave the heart.

In fact, the valve was damaged so badly that half the blood that was pumped out of the heart was going back in, not circulating throughout the body, according to the Post-Gazette.

Additionally, the improper blood flow caused his liver and one of his kidneys to completely fail.

‘There were only two options. Either we intervened and he got better or Lyle was going to die.’ 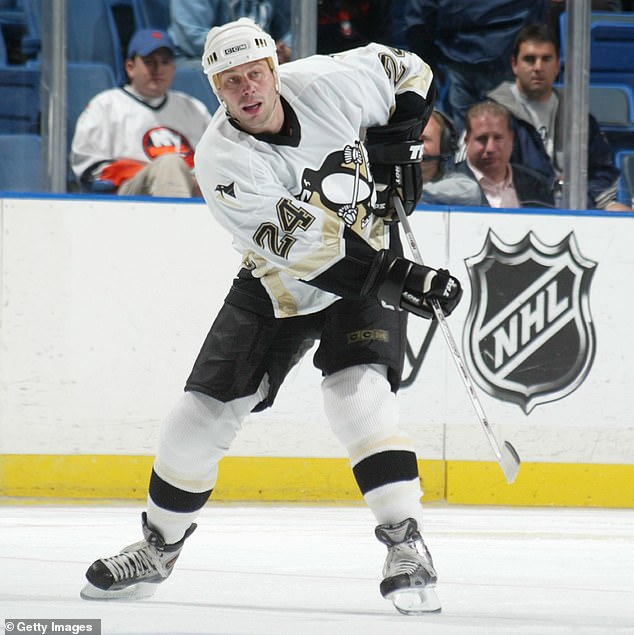 Doctors found he was suffering from a life-threatening blood infection – likely caused by the cactus – that severely damaged his aortic valve and caused his liver and a kidney to shut down. Pictured: Odelein in November 2005 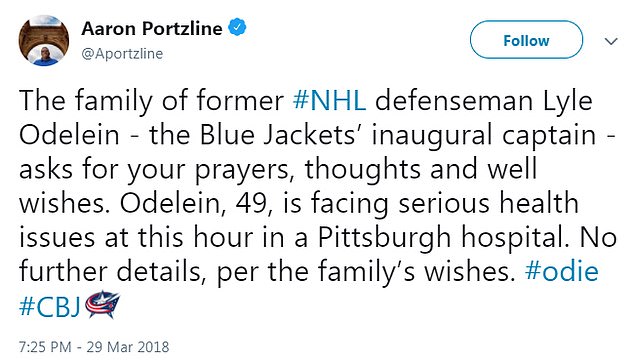 The only way to save his life was to perform a highly unusual triple transplant of his aortic valve, liver and kidney.

It’s the first of its kind that was performed in western Pennsylvania and so rarely performed that it’s unknown how many of these operations have been done.

The doctors also grappled with determining if the organs would be better served being transplanted into someone with a lower risk of dying, the Post-Gazette reported.

‘The last thing we want to do is take on somebody who is so high risk that they won’t benefit,’ Dr Stephen Bailey, director of the division of cardiac surgery at Allegheny, told the newspaper.

‘We had the knowledge that he’s a big strong guy who could take a hit. At the end of the day, our assessment was that he had a good enough chance to survive and thrive.’

Odelein’s case is so rare that it will be documented in a future issue of the Journal of Cardiothoracic and Vascular Anesthesia.

When the news came that a donor with a healthy kidney and liver was available for Odelein, he’d been in a coma for almost a month.

In a 19-hour operation on April 4 and 5, the surgical team first replaced his aortic valve with that of a cow, then the liver and finally the kidney.

Just a few hours after the procedure, Odelein awoke from the coma and – although he showed signs that he was alert – he was unable to move anything from the neck down.

Doctors discovered he was suffering from critical illness neuropathy, a complication that follows severe trauma or infection. 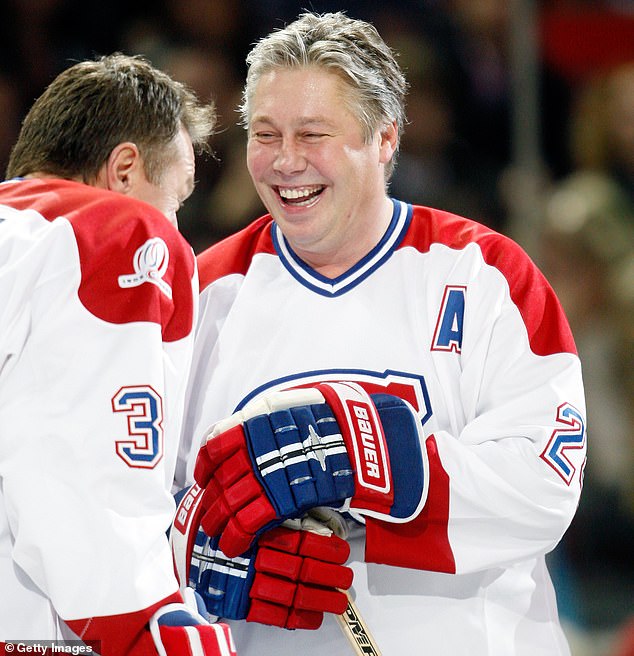 The 19-hour operation was performed on April 4 and 5, which was successful but left Odelein temporarily paralyzed, meaning he had to undergo intense physical therapy. Pictured: Odelein in December 2009 with former teammate Claude Lemieux 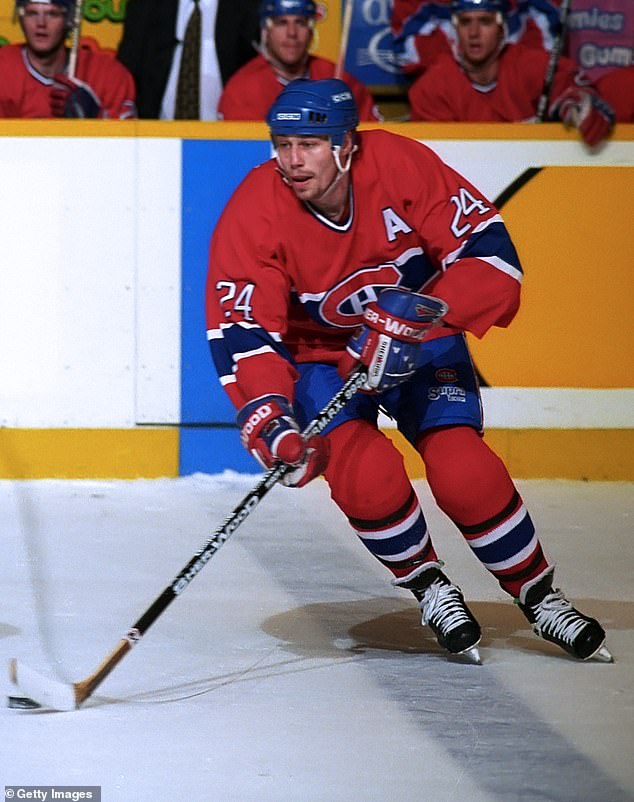 In July, Odelein was cleared to go home – but it took months before he could walk on his own again, albeit now with a cane. Pictured: Odelein in February 1996

It is characterized by extreme limb weakness or difficulty being weaned off of mechanical ventilation.

According to a 2002 French study, ICU patients have between a 47 percent and 90 percent risk of developing either the condition.

‘The sad thing was, as he was coming out of that delirium, and being more conscious, he was conscious of the fact that he was paralyzed,’ Dr Thai told the Post-Gazette. ‘That was hard. I could tell that was hard. That was hard for us.’

After a couple of weeks, Odelein began to feel movement again and began an intense physical therapy program.

‘Every day got a little bit better,’ he told the newspaper. ‘The hardest thing was probably trying to stand up to take that first step.’

In June, he was discharged from Allegheny and entered an inpatient rehabilitation unit at West Penn hospital.

In July, he was cleared to go home – but it took months before he could walk on his own again, albeit now with a cane.

Despite the grueling medical ordeal, Odelein says he can’t wait until he’s back on the golf course.

Odelein was a defenceman for the Montreal Canadiens team from 1989 to 1996 – and won the Stanley Cup in 1993 – before he was traded to the New Jersey Devils.

He went on to play for the Phoenix Coyotes, Columbus Blue Jackets, Chicago Blackhawks, Dallas Stars, Florida Panthers and Pittsburgh Penguins before retiring in 2006.