Former NRL bad boy Tyrone May has opened up on how Panthers coach Ivan Cleary was a ‘father figure’ for the troubled star during his turbulent time at the club.

May, 26, is now on the books of the Catalans Dragons who play in the English Super League, after he was sacked by Penrith last year.

It followed the premiership-winning utility referencing his court case on social media days after the grand final, regarding filming and distributing sex tapes without consent back in 2019.

He narrowly avoided a stint in jail and was sentenced to 300 hours of community service plus a three-year good behaviour bond.

May has no ill-feelings towards his former NRL coach – in fact, he credits Cleary for his ongoing support during the tough moments he has endured.

‘For me personally, [Ivan has] been there through all my bad times,’ he told News Corp. 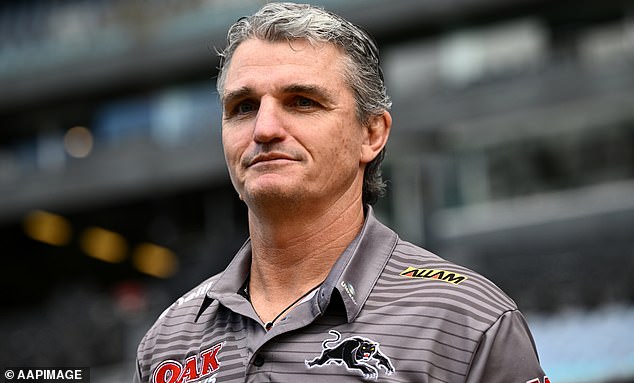 May credits Cleary for sticking by him during his ‘bad times’, which involved a court appearance for filming and distributing sex tapes without consent back in 2019

‘Whenever I was feeling a bit iffy I could go to him because I had that good relationship with him where I could tell him about stuff that was playing on my mind.

‘It helped a lot, it was like having another father figure.’

Coach Cleary’s closeness with his playing group – the majority who are local juniors – is one many reasons why his son Nathan believes the team have been so successful.

The halfback, 24, played lower grades with the likes of Jarome Luai, Dylan Edwards and May – and trust is everything.

Ivan was quick to forge close relationships with the playing group, promoting the importance of the team being on the same page and working hard for one another. 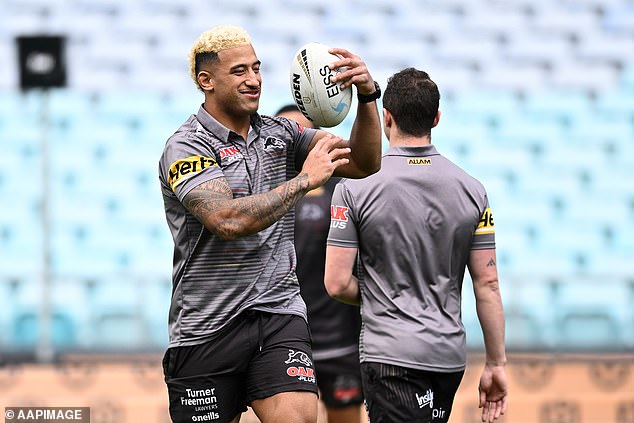 The NRL Grand Final kicks-off at 7.30pm, with the Panthers widely tipped to go back to back (pictured, Viliame Kikau at Saturday’s captain’s run)

The end result has been staggering, with Penrith in their third successive NRL Grand Final on Sunday.

The runaway minor premiers are also looking to go back to back, just like the Roosters did in 2018 and 2019.

Sunday’s big dance will also mark 200 games for Cleary in charge of Penrith across two stints.

If he snares another premiership, his status as a club legend will be confirmed.

Most NRL games coached at one club (dating back to 1908)