The Philadelphia Eagles may need to do some counterespionage if they’re going to upset New England in Super Bowl LII on Sunday because the Patriots and coach Bill Belichick allegedly knew their signals when the teams met in Super Bowl XXXIX.

Former Philadelphia defensive assistant Steve Spagnuolo is convinced the Patriots were stealing signals when they beat the Eagles, 24-21, on February 6, 2004 in Jacksonville.

‘The biggest thing we learned was make sure you have two signal callers, not one signal caller,’ Spagnuolo, who recently served as the New York Giants defensive coordinator, told radio station 97.5 The Fanatic on Monday. ‘Because they may have all your signals.’

The Patriots knew when the Philadelphia Eagles were blitzing in Super Bowl XXXIX, according to former Eagles assistant coach Steve Spagnuolo

Two years earlier, Belichick was fined $500k and New England was docked a first-round draft pick and an additional $250k for filming the New York Jets defensive signals from an unauthorized location during a game in 2007. The incident would ultimately become known as ‘Spygate.’

But since the allegations against the Patriots were not made public until 2007, Spagnuolo was not necessarily convinced his defense’s signals were being stolen during Super Bowl XXXIX in 2005.

Defensive coordinator Jim Johnson, on the other hand, was sure of it at the time because, according to Spagnuolo, the Patriots seemed to have a good intuition about when the Eagles were blitzing. (Johnson passed away in 2009)

‘I remember through the course of the game Jim saying, ‘They’re getting our signals. They know when we’re blitzing … try to hide it, etc. etc.,” Spagnuolo said. ‘I remember distinctly thinking ‘Jim I don’t think that’s true.”

‘Now I’m not saying this to him, because I don’t want to upset him. I’m saying it to myself,’ he continued. ‘”I don’t think so Jim, just concentrate on calling the game.”‘

Upon watching the game film afterwards, however, Spagnuolo became convinced that the Patriots knew the signals.

‘In hindsight, he was right,’ Spagnuolo said. ‘When you go back and look at that tape, it was evident to us.’

One thing that does not support Spagnuolo’s claim is the fact that Patriots quarterback Tom Brady was sacked five times in Super Bowl XXXIX. 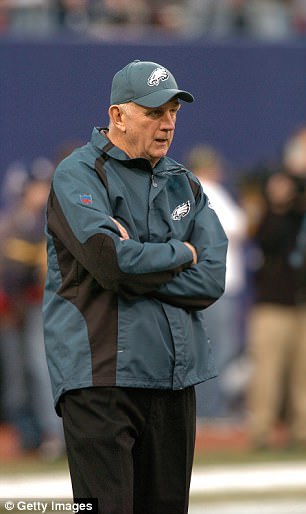 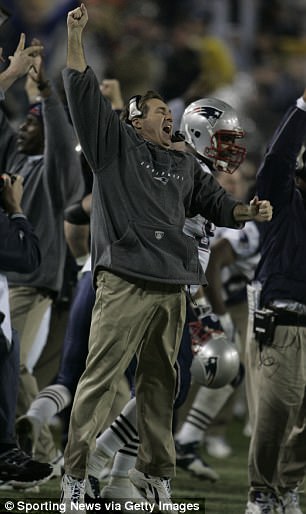 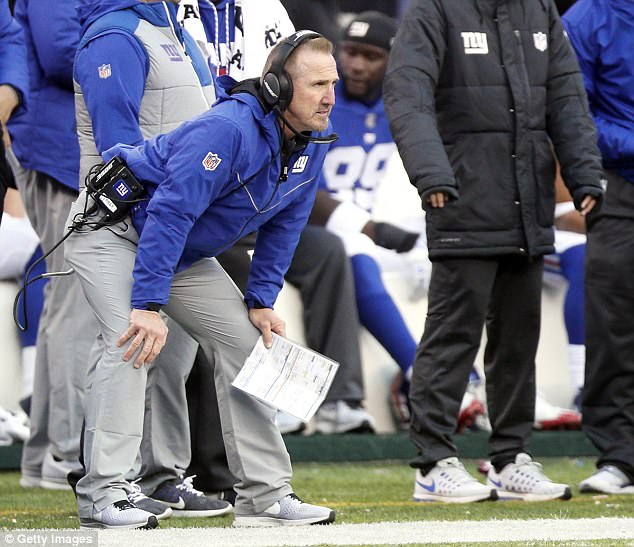 Steve Spagnuolo would go on to become the Giants defensive coordinator. In that role, he helped New York upset an undefeated New England team in Super Bowl XLII

Spagnuolo was the Giants defensive coordinator in 2008 when they upset the previously undefeated Patriots in Super Bowl XLII. ‘There’s no question I wasn’t going to let that happen in the 2008 Super Bowl after the 2007 season,’ Spagnuolo added.

The Patriots were also accused of filming a St. Louis Rams’ walkthrough before Super Bowl XXXVI in 2002, which would have given Belichick and his staff intimate knowledge of their opponent’s game plan. (A walkthrough is practice that focuses on strategy and is done at a walking pace to ensure all 11 players understand their respective duties on any given play).

Belichick has denied that accusation and nothing was ever proven.

The Patriots upset the heavily favored Rams, 20-17, to win their first of five Super Bowl titles.

Former Pittsburgh Steelers running back Jerome Bettis and former teammate, linebacker Joey Porter have also accused the Patriots of knowing their signals during the 2004 AFC Championship Game. Bettis even told the Pittsburgh Post-Gazette that the Patriots knew the Steelers hand signals.

However, Bettis still believes the Steelers players are to blame for their loss to the Patriots.

‘The Spygate thing, that was frustrating,’ Bettis told the Post-Gazette. ‘Looking back, there were opportunities that were blown that was very hurtful. But you can’t cry over spilled milk, and we lost those opportunities. We should have played better and we didn’t and we can’t do anything but blame ourselves.’

In fact, Spagnuolo even used the same well-worn maxim when explaining himself.

‘I’m not crying over spilled milk here,’ Spagnuolo said during the radio interview on Monday. ‘But we believed that Tom knew when we were pressuring, because he certainly got the ball out pretty quick. But, you know, you got to play the game, and they won that particular day.’