A former policewoman has revealed her four-legged solution to debilitating depression after suffering with the mental health issue for more than 20 years.

The go-getting mother-of-one has credited her new role as the ‘Cilla Black of the dog world’ with ‘helping to boost my mood in ways I could never have imagined’.

‘Instead of owners having to send their pets to kennels, they come to us and we match each dog with an appropriate host, who will look after them in their own home and give the animals their very own holiday’, she said.

Comparing her job to the Blind Date presenter’s, Elaine explained that for many years she used exercise to keep her demons at bay, working for some time as a personal trainer and fitness instructor.

But she soon discovered that man’s best friend was her real salvation, after taking over the reins of Barking Mad, a dog boarding experience, in 2014, with her childhood sweetheart, John, 47, who she married in Croatia in 2010. 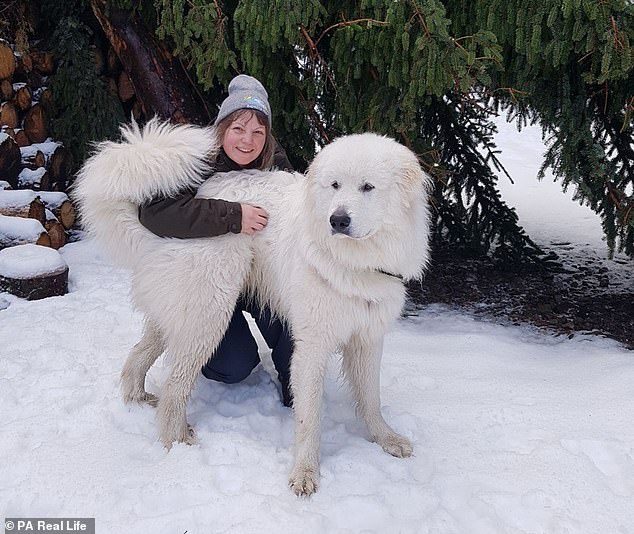 The process of match-making a dog to their host has proved invaluable for Elaine, who has struggled with depression since the breakdown of her first marriage in 1994.

‘I feel like I have the best job in the world,’ she said. ‘I’ve always used exercise to help treat my depression and running around setting up our pups with their hosts has helped boost my mood in ways I could never have imagined.’

‘It’s a win win for everyone involved. The dogs are thrilled to explore a brand new environment and the hosts, who are often retired, get to experience the joy of having a pet without the long-term commitment.’ 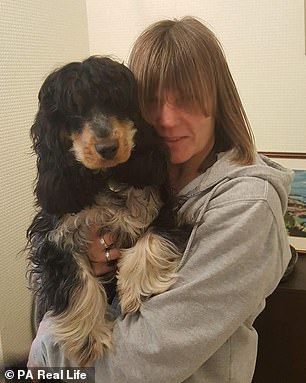 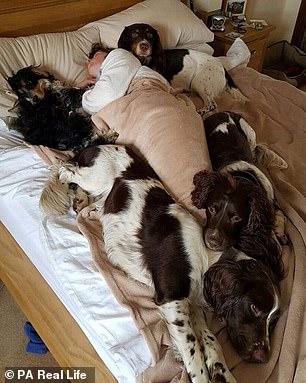 Elaine pictured left with her pup, Willow, and right, under a blanket of her Springer Spaniels 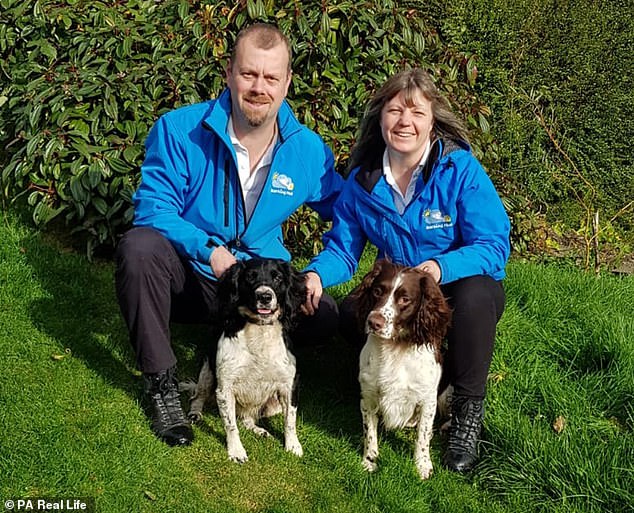 Elaine took over the reins of Barking Mad, a dog boarding experience, in 2014, with her childhood sweetheart, John, 47, who she married in Croatia in 2010 (pictured together)

The process is an amazing natural tonic for Elaine who was just 25 when her depression was at its worst, leaving her unable to get out of bed and seeing her prescribed anti-depressants by her GP.

‘The animals became my therapy – a way to get the same benefits as I did with fitness,’ she added.

Elaine, whose daughter Emily is 14, suffered with intermittent bouts of depression, which she has treated using a combination of natural and conventional medicine.

‘Since my first diagnosis I’ve tried everything possible to boost my mood naturally, as well as using medication,’ she explained.

‘From smoothies and herbal treatments to CBT and talking therapy – I’ve tried everything and still take some anti-depressants, but only a very low dose.’ 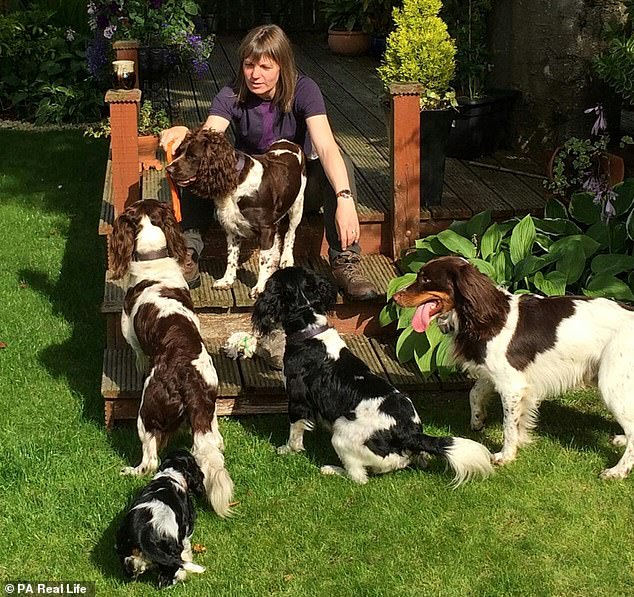 The pair went from having one pet Springer Spaniel, Woody, to six in the space of two years – adding Shadow, Bracken, Jazz, Willow and Milla (all pictured) 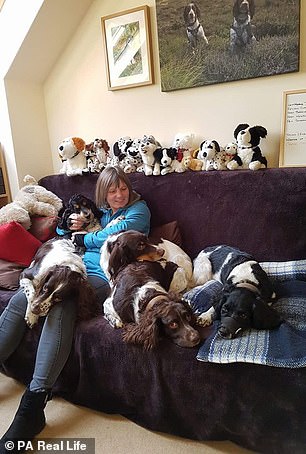 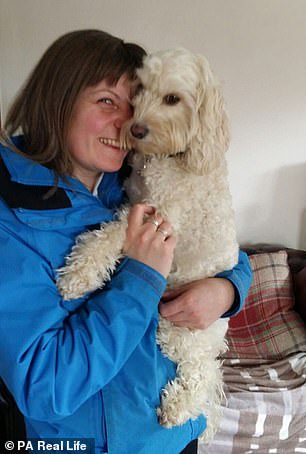 Elaine, pictured left with her pack of Springer Spaniels and right, with one of her holiday pets, Flora, said the animals became her therapy

Getting into health and fitness in her later 20s was a great help and saw Elaine focusing on active jobs – becoming a personal trainer in 1996, before joining the police in 2000.

Then, after leaving the force in 2008, she returned to work as a personal trainer and fitness instructor.

She explained: ‘From my first workout, I immediately felt the power of endorphins rushing through my brain and I slowly began to lower my dose of anti-depressants.’

But, when she reached 43 she could no longer keep up with the physical demands and realised she needed a change.

‘I was holding 17 fitness classes a week and my body just couldn’t keep up like it used to,’ she explained. 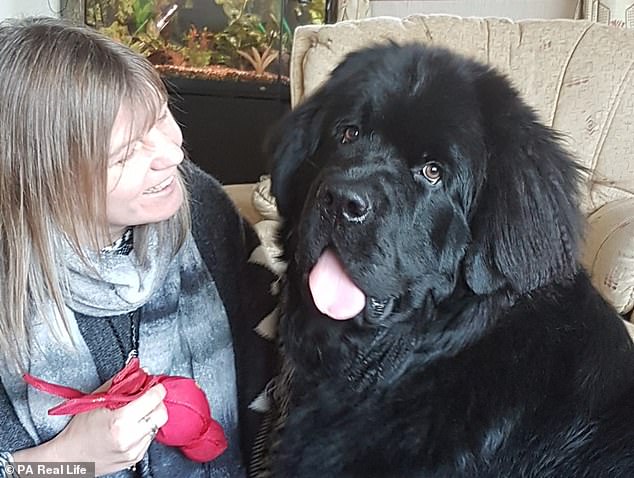 Elaine, pictured with visiting dog Harry, suffered with intermittent bouts of depression, which she has treated using a combination of natural and conventional medicine

She reduced the number of classes she was holding each week before eventually hanging up her Lycra for the last time in 2014, after a friend told her about the opportunity to take over the Barking Mad franchise in Perth and Kinross.

‘I broached the idea with John, but he wasn’t too sure about it at first,’ she said. ‘It’s a big decision to make, running your own franchise, but it’s also pretty exciting. Who doesn’t want to be their own boss?’

Eventually John, who had worked as a marketing director, came around to the idea and the pair took over the franchise later that year.

The couple slowly built a community of 20 volunteers, who host the dogs while their owners are on holiday.

Elaine said: ‘It’s a great alternative to kennels, where generally the dogs are locked up outside and not given much one-on-one attention.

‘Quite often owners feel guilty leaving their beloved pets at the kennels while they’re jetting off on a nice holiday, but we offer a mini-vacation for pets too!’ 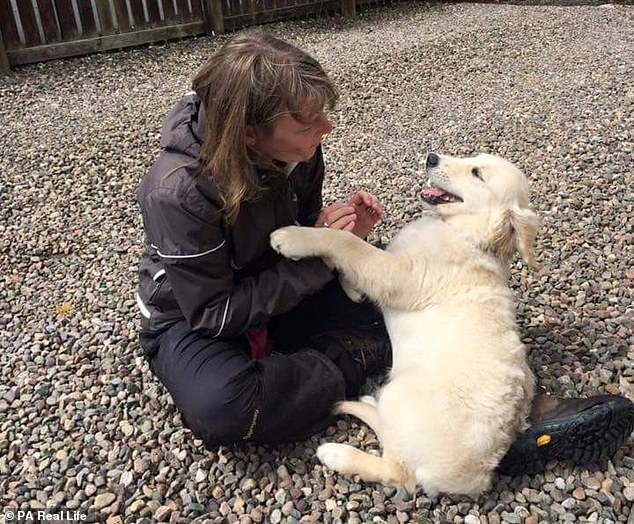 Showing her love of dogs, Elaine plays with beloved Nemo who stayed with one of her hosts 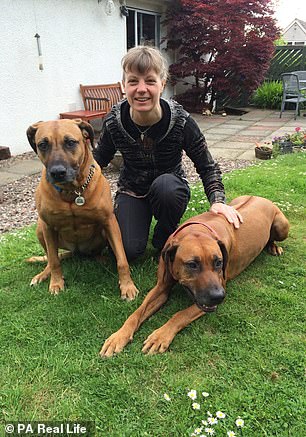 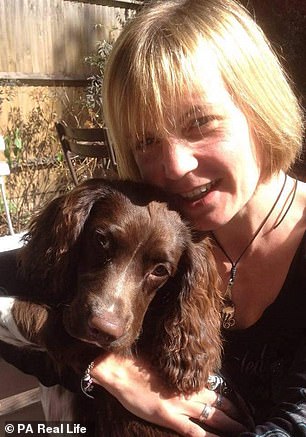 Elaine, pictured left with guest pooches, Kasha and Mesha, and right, with her dog, Woody

And the couple have a stringent selection process before matching animals with their hosts.

Elaine explained: ‘Finding the individual who will love and care for someone else’s dog the way they would their own is no easy feat.

‘But luckily our family is made up of the most wonderful people from all walks of life. The majority are retired people who still want to be very active and be part of something.

‘Eighty per cent of our volunteers are in the over 70 bracket and looking after these animals is an escape for them. We bridge a lot of gaps in the community.’

While the number of canine holidaymakers using the couple’s franchise grew, so did their own four-legged family.

The pair went from having one pet Springer Spaniel, Woody, to six in the space of two years – adding Shadow, Bracken, Jazz, Willow and Milla.

‘The dogs keep me on an even keel and my anti-depressant medication is at the lowest it’s been in a long time – I’m in much better frame of mind these days,’ said Elaine.

‘People may think I’m barking mad for doing this, but at least I’m no longer depressed!’

Elaine and her Barking Mad franchise have been shortlisted as finalists in the lifestyle category at the 2019 bfa HSBC Franchise Awards.