Former Premier League player Ronny Rosenthal was attacked by knife-wielding robbers who burgled his home while his family slept.

The footballer, a former Tottenham Hotspur player, was punched in the face after six men ‘carrying machetes and wearing balaclavas’ broke into his £4million property at 1am in Cricklewood, north west London.

Sources say they were trying to steal designer watches from Mr Rosenthal’s house and were ‘in and out in five minutes’.

The incident, which took place in May, has been revealed just days after Arsenal stars Mesut Ozil and Sead ‘The Tank’ Kolasinac were attacked by armed moped muggers who were trying to steal their expensive watches.

The pair were ambushed while in Ozil’s black Mercedes G-Class near his home in north London and were pursued to Golders Green, where they got out and Bosnia international Kolasinac fought the knife-wielding robbers off with his fists.

Regarding Mr Rosenthal, who also played for Liverpool in his career, a neighbour told the Evening Standard: ‘He told me that they were physically abused and threatened with machetes and horrible stuff like that.

‘The raiders were in and out in five minutes … these people know what they’re doing. The family are fine now, they are a strong family but it wasn’t pleasant.’ 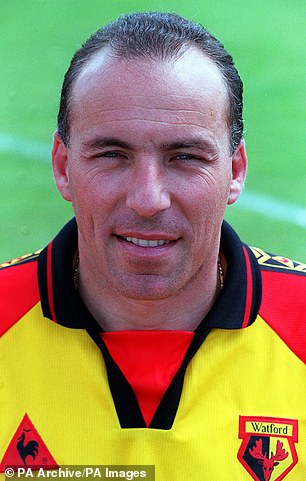 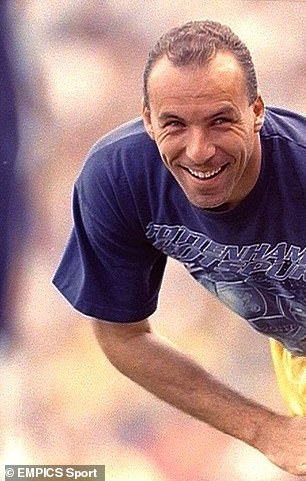 Father-of-two Mr Rosenthal, pictured during his career at Watford (left) and Tottenham Hotspur (right), was punched in the face after six men broke into his home 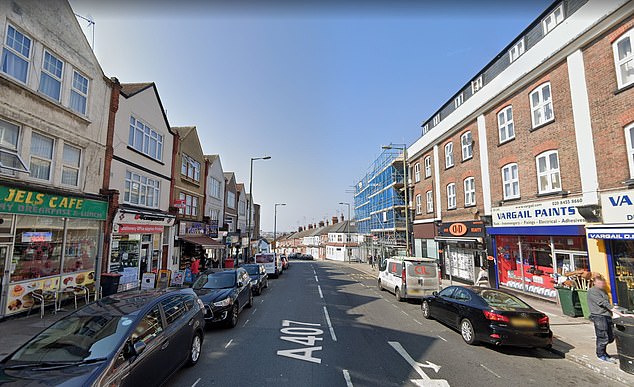 Sources say the robbers were trying to steal designer watches from Mr Rosenthal’s house and were ‘in and out in five minutes’. Pictured is Cricklewood in London

The neighbour added they paid £20-per-week for private security themselves because of concerns over violent gangs targeting wealthy parts of north London.

Another woman who has lived in the area for more than 20 years added: “They knew what watches he had. They went in and punched him in the face. It’s like a cancer. One in five of us is going to get it, so you almost expect it.’

She said she had even seen her parents attacked on her own doorstep.

Mr Rosenthal, who was nicknamed ‘Rocket Ronny’, played for Liverpool until January 1994 when Tottenham paid £250,000 to secure his contract.

He is known for missing a goal in September 1992 when he hit the crossbar from 10 yards during a match against Aston Villa.

The father-of-two, who was born in Israel, retired from playing at the age of 35. He now works as a football consultant in London. 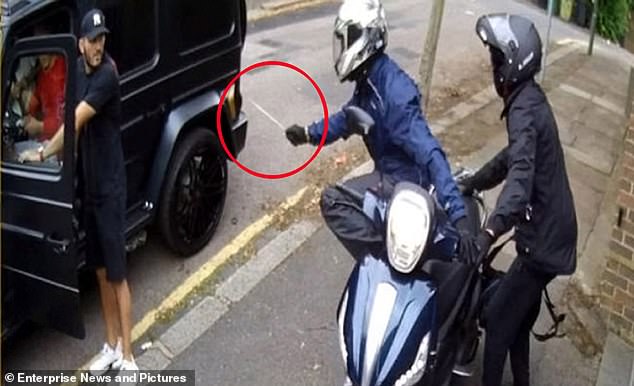 The Met Police has confirmed it is investigating the burglary on May 11 and that no arrests have been made.

A spokesperson said: ‘Police are investigating an aggravated burglary in Cricklewood that took place on May 11.

‘Officers were called to a residential property at 1.14am to a report of multiple armed intruders forcing their way inside.

‘Various items were stolen before the suspect left the scene. No arrests. Enquiries continue.’

Ozil and Kolasinac were chased through the mansion-lined streets of north London last Thursday in a high-speed pursuit as attackers pelted the car with roof tiles to try and break the rear window.

Ozil overtook traffic on the wrong side of the road as ‘ninja style’ robbers followed them. During the pursuit, Kolasinac phoned a nearby Turkish restaurant on Golders Green where they were regulars, before they stopped there and jumped out.

Ozil is known for his love of high-end timepieces, including a £30,000 special-edition ‘Invincible’ Rolex and a £6,600 special edition titanium Cyrus Kuros.

Footage of Kolasinac confronting the attackers shows a watch on his left hand, although the make isn’t clear.

CCTV footage captured before the chase began showed burly 6ft Kolasinac squaring up to and rushing at a robber whose face is obscured by a crash helmet. 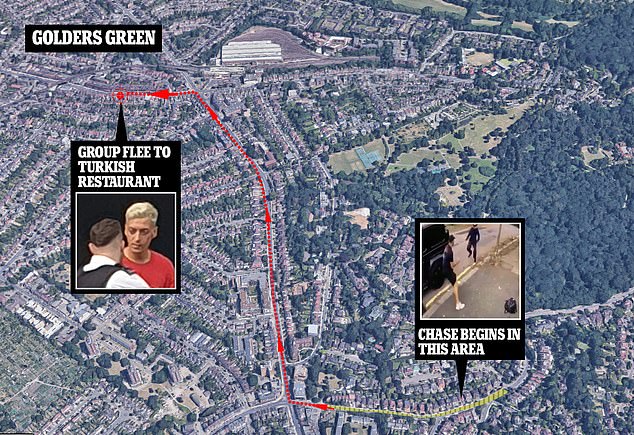 The 26-year-old darted toward the front end of the Mercedes to face off an attacker and made sure the front passenger door was protected.

The attack in Golders Green took place close to where comedian Michael McIntyre was forced to hand over his expensive watch after being set upon by an armed moped gang.

Mr MacIntyre had been parked outside his children’s school in Golders Green when the brazen thugs smashed up his car and ripped the £15,000 timepiece from him.

Last month Strictly star Pasha Kovalev was robbed by moped thieves while standing outside a theatre. The robbers reportedly rode on to the pavement and snatched his phone.

Pasha, 39, was unhurt but upset he lost the mobile, which had pics of his pregnant partner, Countdown host Rachel Riley, 33.

HOW ROBBERS HAVE TARGETED VIPs IN LAWLESS LONDON

Ozil and Kolasinac are the latest high profile figures to be targeted by armed bikers in London.

In 2016, then West Ham forward Andy Carroll was chased by two motorcyclists, one pointing a gun at him, as he drove his Jeep Wrangler to the training ground.

They were after Carroll’s £22,000 watch but the terrified striker was able to make it to the West Ham car park as he spoke to police on the phone.

Last month Strictly star Pasha Kovalev was robbed by moped thieves while standing outside a theatre. The robbers reportedly rode on to the pavement and snatched his phone.

Pasha, 39, was unhurt but upset he lost the mobile, which had pics of his pregnant girlfriend, Countdown host Rachel Riley, 33.

Comedian Michael McIntyre was robbed by two hammer-wielding men on a moped outside his children’s school in Golders Green last year.

The men smashed his car windows with a hammer and snatched his watch before fleeing.

Former Chancellor George Osborne was targeted by a moped gang that robbed 103 phones in an 18-day reign of terror.

Politician-turned Evening Standard editor Mr Osborne said the raiders made a grab at his mobile as he left BBC headquarters in Portland Place, in May 2017.

Armed with a hammer and tyre-iron, the trio singled out pedestrians texting or making calls before mounting the pavement and snatching the handsets in central London.

A photographer managed to get detailed pictures of them during one of their raids outside the BBC headquarters.

Made in Chelsea’s Spencer Matthews was forced to hide in the vault of a London jewellery store during a smash-and-grab gang raid in May.

The thieves on mopeds smashed their way into The Hour House just minutes after the reality star went into buy a watch.

The only watch not taken in the raid was the one he had gone in to buy, he revealed on Instagram.

Simon Jordan, who used to own Crystal Palace saw his £127,000 watch taken at gunpoint as he sat in his Masarati in March 2016.

Formula One tycoon Bernie Ecclestone, now 88, was seriously injured after he was mugged of jewellery worth £200,000 in November 2010.

He needed hospital treatment after he was punched and kicked to the ground by the robbers, who had waited outside his Knightsbridge home in west London.

Moped muggers tried to steal the watch off the wrist of TV comedian Keith Lemon. The Celebrity Juice host, real name Leigh Francis, at first didn’t realise he was the victim of an attempted mugging.

The thieves made off without the watch, which was just a gold Casio costing around £40.

I’m A Celebrity winner Christopher Biggins had his phone snatched by a hooded cyclist as he waited for a taxi after leaving a posh restaurant in Covent Garden in April.

Susanna Reid revealed last year how she was mugged on the streets of London but chased after her attacker in a ‘dangerous’ bid to reclaim her possessions. She told her GMB co-host Piers Morgan the incident was ‘a long time ago’.

Model Carly Zucker, who is married to ex-England footballer Joe Cole, was carjacked by eight thugs on motorbikes outside their home in the Chelsea area of London in 2010. She was hauled from her Audi A4 before the thugs sped off in the vehicle.