A former hospital staffer suspected of killing nine patients nearly two decades ago has been arrested after being charged in one of their deaths – while wearing a hoodie bearing the message ‘I don’t f*****g care.’

Cops had been searching for Jennifer Anne Hall, 41, since last week, after charging the ex-respiratory therapist with first-degree murder for the 2002 death of 75-year-old Fern Franco – one of nine people who died of cardiac collapse between December 16, 2001, and May 16, 2002, at Hedrick Medical Center in Missouri.

Hall, who worked at the 49-bed hospital during that same span, quickly came under suspicion for the slew of  ‘code blue’ incidents – which were viewed by doctors and nurses at the hospital as ‘medically suspicious,’ an arrest affidavit shows.

Hospital brass eventually put Hall was on administrative leave on May 18, 2002 – two days after the death of Franco, whom cops contend was the last of her victims.

Now, the long-suspected angel of death faces first-degree murder charges for Franco’s death, after after being arrested by Jefferson County police in Kansas Thursday.

Photos obtained by Kansas City news outlet KCTV showed Hall after her arrest, donning a hoodie bearing the image of an angry Care Bear, with the brazen message emblazoned on the front.

Photos show ex-respiratory therapist Jennifer Anne Hall – who was charged with first-degree murder of one of nine patients she was suspected of killing nearly 20 years ago at a Missouri hospital – after her arrest in Kansas City Thursday, during which she donned a hoodie bearing the image of a Care Bear, with the message ‘I don’t f***ing care’ emblazoned on the front

Officers at the Jefferson County Sheriff’s Department did not reveal further details of the arrest when contacted Friday by DailyMail.com.

For the past 20 years, Hall, who lived in Kansas prior to her incarceration, managed to avoid charges for the nine deaths – despite doctors’ suspicions – due to a lack of evidence.

The case, however, was revived earlier this month, after an analysis of Franco’s body found the powerful sedatives succinylcholine and morphine to be the cause of her death – drugs not prescribed or ordered for her by her doctors, Missouri police say.

Cops had been searching for Jennifer Anne Hall, 41, since last week, after charging her with the 2002 murder of 75-year-old Fern Franco – one of nine people who died of cardiac collapse under Hall’s watch between December 16, 2001, and May 16, 2002, at Hedrick Medical Center in Missouri

The drugs would have left the the patient’s muscles, rendering her unable to breathe – all while still maintaining full consciousness, officers and medical professionals cited in the affidavit said.

“Hall’s victim was a sick, defenseless, elderly woman who was depending on Hall to care for her physical ailment within a medical facility,’ a Chillicothe police officer testified in the document asserting probable cause for Hall’s arrest.

‘The substance Hall used to brutally take Fern Franco’s life, succinylcholin, paralyzes the victim’s muscles, including the diaphragm, causing the victim to suffer a ghastly death from suffocation while still maintaining full consciousness and awareness that they are unable to breath.

‘Morphine also acts to suppress respiration and is not given to pneumonia patients for that reason,’ the cop wrote.

Franco, who was hospitalized with pneumonia, died after nurses found her unable to breathe on May, 18, 2002, and failed in repeated attempts to resuscitate the senior.

According to the probable cause document, staffers at Hedrick Medical Center – situated in Chillicothe – reported a rise in cardiac emergencies among patients while Hall, then in her early 20s, was employed at the hospital.

During Hall’s five months at the hospital – where she was meant to help patients who having difficulty breathing due to complications stemming from conditions such as cardiac and pulmonary disease by providing them drugs intravenously  – staffers recorded 18 cardiac incidents, including the nine aforementioned fatalities.

Prior to Hall’s hiring, the hospital averaged just one incident a year.

Court documents show nurses at Hedrick Medical suspected Hall was responsible for the deaths due to her proximity to the patients, as well as her access to deadly drugs and the fact she was involved in reporting each of the nine victims’ deaths. 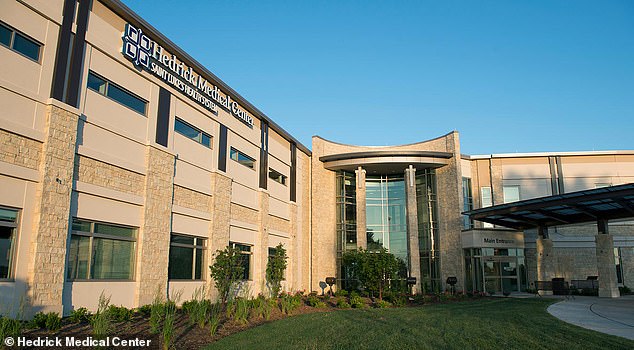 Court documents show nurses at Hedrick Medical suspected Hall was responsible for the deaths due to her proximity to the patients, as well as her access to deadly drugs and the fact she was involved in reporting each of the nine victims’ deaths

‘Because of Hall’s singular proximity to stricken patients, her access to pharmaceuticals which are deadly if misused, and her discovery and method of notifying staff of every patient’s cardiac emergency, nursing staff believed Hall was responsible for the patient deaths,’ Chillicothe Police Officer Brian Schmidt wrote.

Hall had previously denied responsibility for the deaths at the Missouri hospital, telling the Kansas City Star in 2015.

‘My name is just thrown out there, and it’s for horrifying reasons,’ she said at the time, in the presence of her attorney. ‘I want my name to be cleared, yes,’ she added. ‘At the same time, I don’t want my character destroyed.’

‘It is absolutely devastating to my client and her family and myself, frankly, to have a case that is without merit whatsoever and based on conjecture and speculation.’

‘This isn’t lawyer talk – there aren’t facts in support of it because Ms. Hall did not commit these acts.’

‘They’ve tried for years to find evidence and it didn’t even rise to the level of a civil case, which is a much lower standard. The Missouri Supreme Court has thrown this case out at a civil level.’

Michael Manners, a former Missouri judge who represented the families of the deceased patients in the civil litigation, said Monday that he was unaware of the criminal charge against Hall, but that he had rumors of officers’ investigation.

‘Once in a while you think, “by God, justice does prevail from time to time,”‘ Manners told KCUR.

‘Now, she is only charged with this and I’m an old judge and I know she is not guilty until she is proven guilty. But it’s good at least that the process is working to find out if she did what she is accused of doing – because God knows we failed at the civil part of it.’

The criminal complaint against Hall lists 34 state witnesses, all of them listed by their initials. Schmidt’s probable cause statement said the witnesses ‘expressed fear for their lives and the safety of their families if Hall were to discover their names and personal information.’

The document also revealed that during police’s investigation – which was reopened in 2017 after Scott Lindley approached new Chillicothe chief of police Jon Maples and prosecutor Adam Warren with his long-held suspicions of foul play in the deaths.

Nearly five years later, the Chillicothe Police Department was able to connect Hall to the death of one of the suspected serial killer’s alleged victims, in Franco.

The investigation also found ‘that Hall is exceptionally computer literate, capable of locating anyone’s personal information, and efficient at masking her on-line identity.’ Cops last week said the then still-at large suspect was likely using an alias to avoid capture.

Before she was employed at Hedrick Medical, Hall was convicted of setting fire to another Missouri hospital where she had worked as a respiratory therapist – Cass Medical Center in Harrisonville, Missouri,

She spent a year in prison after being found guilty of the 2001 crime, before an appeals court vacated her conviction on the grounds she received ineffective counsel at trial. A jury subsequently acquitted Hall during a retrial.

‘This case is based on the hindsight of people looking at issues in their own hospital and when Ms. Hall’s prior wrongful conviction came to their attention, they started pushing pieces toward her,’ Hall’s lawyer said.

‘They’ve tried for years to find evidence and it didn’t even rise to the level of a civil case, which is a much lower standard. The Missouri Supreme Court has thrown this case out at a civil level.’ 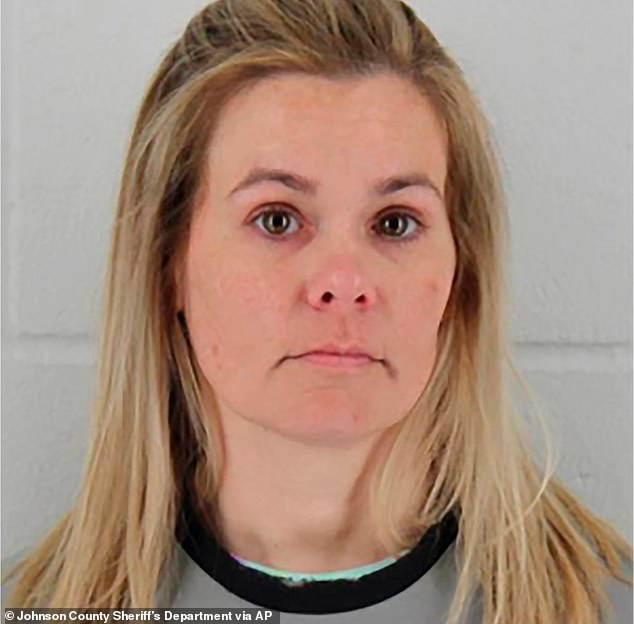 For the past 20 years, Hall, who lived in Kansas prior to her incarceration, managed to avoid criminal charges for the nine deaths – despite doctors’ suspicions – due to a lack of evidence. Police reopened the case in 2017 after being confronted by a coroner suspicious of Hall

The attorney also said that before her arrest, Hall had been undergoing chemotherapy treatments for leukemia.

‘Great work by the officers and agencies working together in locating Ms. Hall,’ Cox said, adding that Hall ‘may [also] have charge(s) elsewhere.’

The sheriff added that Hall is set to be extradited to Missouri, where she will be tried for first-degree murder.

Aprille Franco, the granddaughter of deceased Fern, said she hopes the case makes it to court so she and the surviving relatives of Hall’s other alleged victims obtain some sense of closure.

‘I hope this will make it to trial, and if she’s not the one responsible, I hope they dig deeper into who is responsible,’ Aprille, who was 24 when her grandmother died, told People prior to Hall’s arrest.

‘I don’t want this to happen to anybody else,’ Franco said, adding that that was what her late father, Fern’s son, had wanted.

‘I’m doing this for him, and the families. They deserve justice.’

Hall is scheduled to be extradited back to Missouri next week.