A former Royal Marine survived a hurricane to become the first blind person to successfully row across the Pacific.

He spent the last 82 days at sea with team mate Mick Dawson in a 6ft x 21.5ft a carbon fibre ocean rowing boat – and said they had to endure several setbacks. 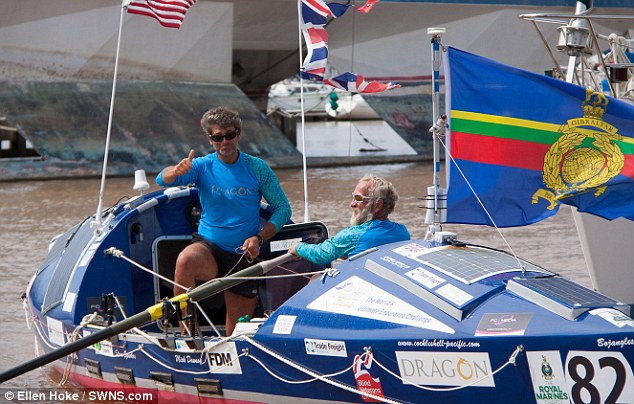 While approaching Hawaii, the pair had to shelter in the vessel’s cabin after Hurricane Lane passed within 50 miles of their location, battering them with giant waves, rain and thunder

But he said the pain subsided as they were greeted scenes of jubilation when the pair docked in Hawaii after completing the Great Pacific Race they set off on from Monterey in California in June.

On their approach the finish they even came face to face with the wrath of Category 5 Hurricane Lane. The eye of the storm was just 50 miles from their position meaning the duo faced giant waves, rain and thunderstorms and had to lock themselves in the tube-like cabin for 36 hours.

In one terrifying incident Steve says he was also swept overboard, saved only by the fact he was tethered to the boat all the time. 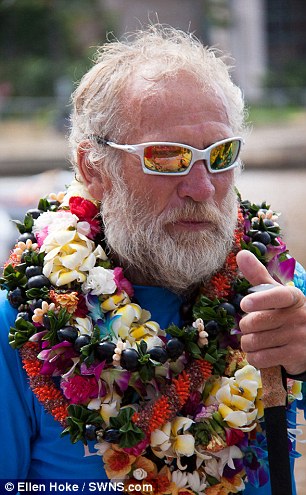 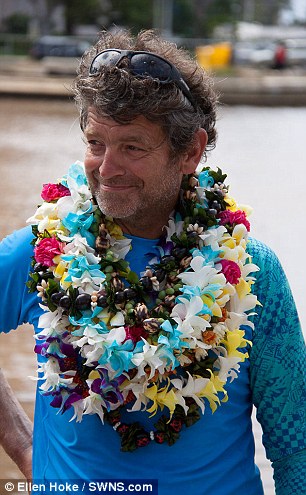 Steve Sparkes, left, and Mick Dawson, right, initially expected to complete their trip in around 55 days, but weather delays meant the pair spent more than 80 days at sea Following the storm, the pair were offered a tow for the remaining few miles into Hawaii, but decided it was important for them to complete their amazing journey greatest

The pair were offered a tow back to the finish line but turned down the offer, wanting to complete what they started under their own steam.

Steve, of South Brent, Devon, said that despite all the challenges he was thrilled to be back on dry land and was met with a flask of tea after having no gas to make hot food or drinks for the last few days. 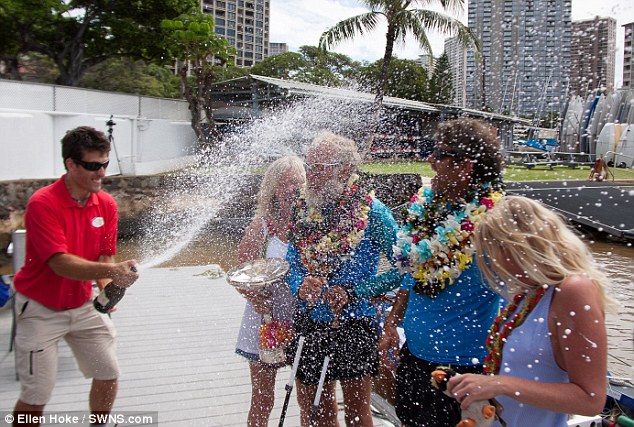 The pair of intrepid rowers celebrated upon their arrival on Hawaii after their 3,000-mile trip

He said: ‘It feels amazing – I am buzzing right now.

‘It is great to be back on dry land and I will have such good memories. To be greeted the way we were in Hawaii was just the icing on the cake. There were so many people there and the reaction we got was amazing.

‘It is just a feeling of relief at having finally conquered the trip.The welcome was fantastic and all the pain just went out the door.

‘Of course I am very proud to have done it and become the first visually impaired person to.

‘Hopefully people with similar problems in life, both physical and mental, can look at it and maybe think ‘I can give it a go.’

‘The rewards having achieved it far outweigh any downside and has made me feel exceptionally boosted. I am sure that feeling will last a long time.’ 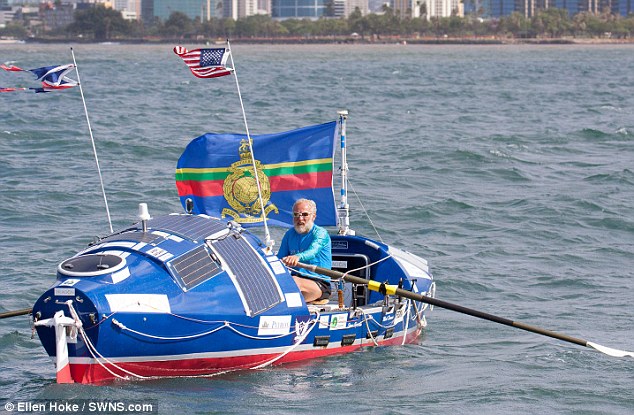 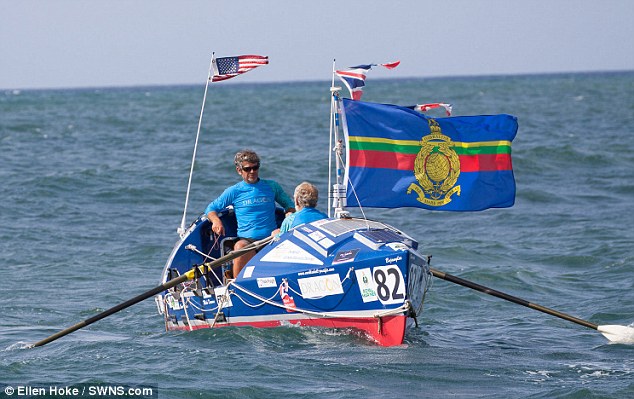 While the direct route is 2,400 miles, weather conditions and changing currents means Steve and Mick, 54, rowed closer to 3,000 miles.

The row has been completely unaided and the pair carried their own food and supplies, as well as equipment for turning seawater into fresh drinking water.

During the journey the pair suffered several other setbacks – including breaking two oars in rough conditions.

Due to his lack of vision, Steve also slipped on the deck of the boat, nicknamed ‘Bojangles’, injuring his face and head, and he also suffered a knee injury which made the journey slower.

He added: ‘I make no bones out it – I found it incredibly gruelling from the word go. We didn’t have the best of weather and from day one it was choppy and it just got worse.

‘It did not go as predicted and we started by looking at 55 days but in the end it took us 82.

‘There were very rough seas and one turned us over and I ended up in the sea. That was a shock to the system and a real eye opener at what the Pacific can throw at you.

‘You just never knew what was around the corner. 120 miles out we were blocked by Hurricane Lane which was right on top of us.

‘That was an horrendous experience.

‘The whole trip was full of ups and downs but I am just thrilled that we cracked it. I still think ‘crickey – how did we do it?

‘Part of me wants to do it again so can enjoy the rowing a bit more in calmer conditions.’

The pair took it in turns rowing for two hours and spending two hours resting and coped through bouncing off each other.

Steve added: ‘There are always times when you doubt yourself but you just have to pick each other up. Mick is an accomplished ocean rower and kicked me when I needed to be kicked.

‘We just bounced off each other to keep us motivated.’

Mick added: ‘It is very easy to lose the will to live out there but there was nothing we could not make a joke about and that was how we coped.

‘The hurricane was right on top of us. We had an idea where it was due to go and were able to stop early enough but we were still hit by formidable winds.

‘The worst thing was we were crammed in the tube-like cabin for 36 hours while the storm past over us.’

Steve’s blindness is due to a rare form of macular degeneration known as Stargardts. He has lost his sight completely apart from some peripheral vision of shapes and colours.

He was medically discharged from the Royal Marines at a time when there was little in the way of support in place for injured veterans.

Ten years after his discharge Blind Veterans UK, then known as St Dunstans, tracked down Steve who was by then living in Malta.

They flew him back to the UK and provided the first training and support to help Steve deal with his condition. He has since worked consistently with and for Blind Veterans UK helping other veterans come to terms with their loss of sight.

The pair are raising money for Blind Veterans UK, and also The Royal Marines Charity for their challenge and their total currently stands at £10,000.

The pair are due to fly back to the UK on Saturday and are visiting Pearl Harbour with the US Marines tomorrow (Wednesday).

Visit www.cockleshell-pacific.com to make a donation.