British intelligence investigating the Salisbury poisonings have identified a Russian assassin who could be behind the attack.

Codenamed ‘Gordon’, the 54-year-old former FSB spy is thought to use the cover name Mihails Savickis and two other aliases.

However, police fear the suspect has already travelled back to Russia and may never be brought to justice.

British authorities believe there were six agents acting in the poisoning of Sergei Skripal and his daughter Yulia.

Toxic trace amounts of the Novichok poison is believed to have been administered in liquid form to target Sergei Skripal, 66, and his daughter Yulia, 33

The attempted assassins, thought to be now residing in Russia, targeted former double agent Skripal and smeared the chemical nerve agent Novichok – in liquid form – on the front door of his home in Wiltshire, Salisbury, authorities believe.

Counter-terrorism police are building a case against ‘persons of interest’, The Daily Telegraph reports.

It is understood that analysis of flight records in and out of the UK has provided officers with specific names connected to the case.

But police fear they will hit a diplomatic brick wall in trying to interview, or at a later date, prosecute the suspects.

The revelations come following a report by experts at the Organisation for the Prohibition of Chemical Weapons (OPCW) confirmed Britain’s analysis that the attack on the Skripals in Salisbury on March 4 was conducted with the nerve agent Novichok.

Yet Alexander Yakovenko said the details of the OPCW gave Russia cause for concern. 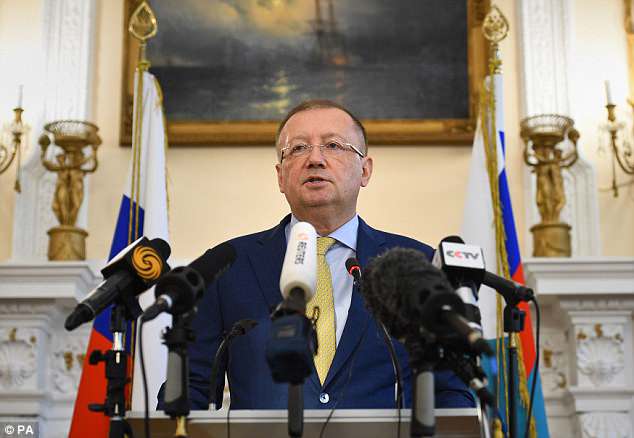 The OPCW reported that the Novichok contained in blood samples from the victims showed little sign of decomposition, even though the agent would normally be expected to react with naturally-occurring chemicals inside the body, he said.

‘This is strange, given that 18 days passed between the poisoning and the arrival of the OPCW in the UK,’ said Mr Yakovenko.

‘It might mean that the chemical was intentionally injected just before the blood samples were taken.’

He claimed that the speed with which the chemical was identified after the attack suggested the UK already had its own samples.

Referring to the Government’s defence research establishment at Porton Down, he said: ‘We know what kind of laboratory is only 10 miles from Salisbury.’

Mr Yakovenko challenged the independence of the OPCW investigation, saying that it had been arranged on a bilateral basis with the UK rather than under the standard practices set out in the Chemical Weapons Convention.

He said: ‘The work of the OPCW experts was conducted under the control of the British side. Pressure on them can’t be ruled out.

‘They checked only the sites designated by the UK beforehand and they looked only for the substance identified by the UK.

‘The format chosen cannot guarantee impartiality and the comprehensive nature of the verification.’

Russia would not take the report’s conclusions at face value unless it was given full access to the victims and to the materials gathered in the investigation, he said.

He doubled-down on Russia’s demands the meet the former spy and his daughter, claiming the UK’s failure to grant access to meant the case should be seen as ‘an abduction of two Russian citizens’. 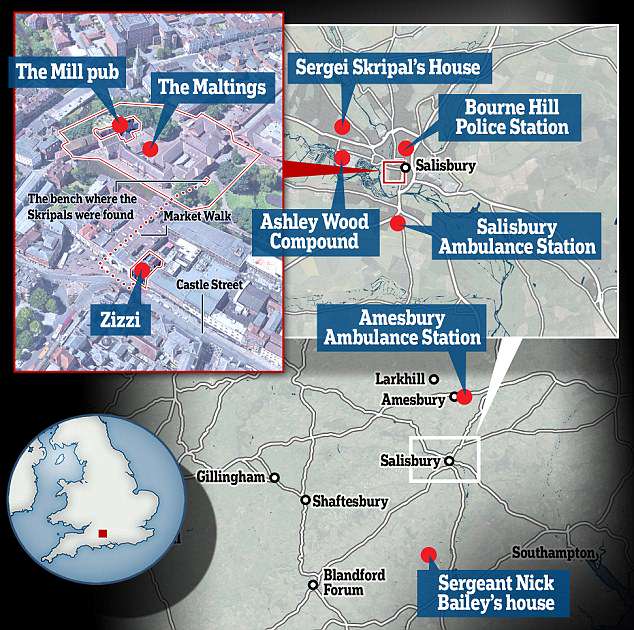 It comes after dangerous levels of the potentially lethal nerve agent used to target the pair may still be present in ‘hot spots’ around Salisbury, Government scientists warned yesterday.

Work has begun to decontaminate nine sites across the city where experts believe the substance could still be present, in a multi-million pound operation that could take months.

The Department for Environment, Food and Rural Affairs (Defra), local council officials, police and health representatives updated locals on the progress being made on Thursday evening.

When quizzed as to whether the chemical remains at the same ‘lethal’ dosage as the day it was put on Mr Skripal’s door, Defra chief scientist Ian Boyd said: ‘ We have to make an assumption that in certain circumstances there will be relatively high concentrations, probably in very, very specific locations, which could be at levels that could be toxic to individuals.’

‘That’s an assumption, it’s also one we’ve tested in some circumstances and we do know that there are hot spots like that around, so we have to make those assumptions that some of the hot spots we’ve still got to find.

‘But those hot spots will still be in the locations we are talking about.

The meeting was held as work began to replace the police cordon around the Maltings area in the city centre, the nearby Zizzi restaurant and the Mill pub with more robust hoardings. 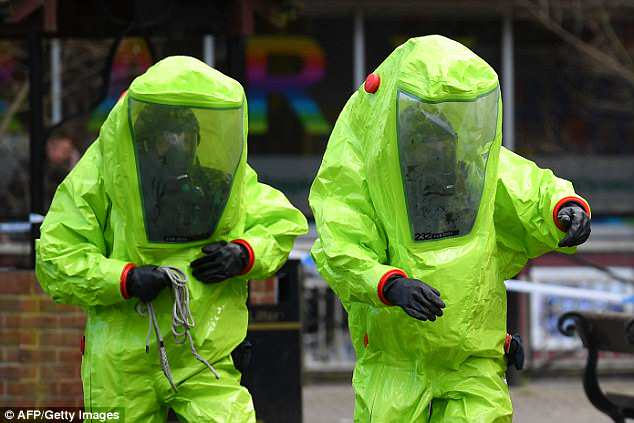 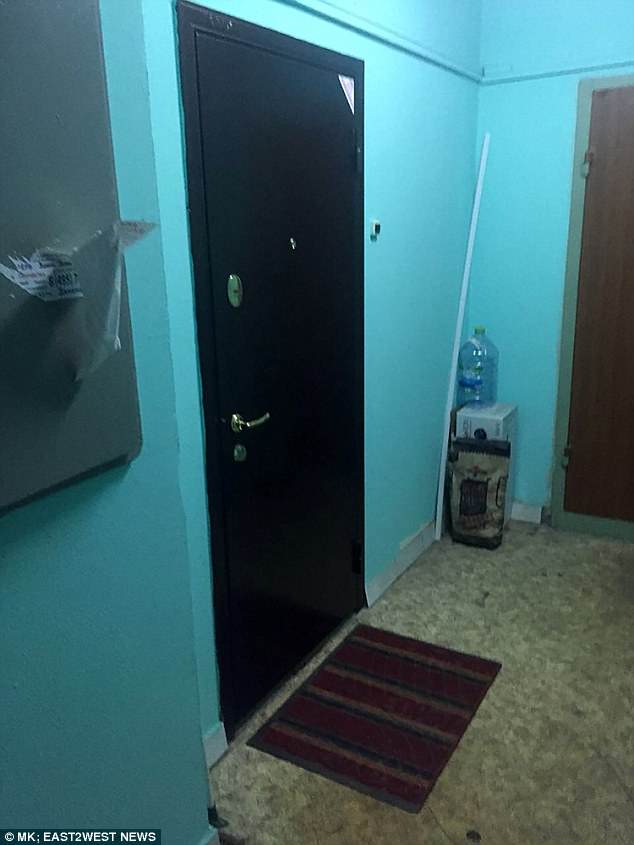 It is believed liquid form of the poison was left on the door of the Skripal’s flat. Pictured: Door of the flat that Yulia Skripal and Stepan Vikeev rented before Yulia traveled to UK 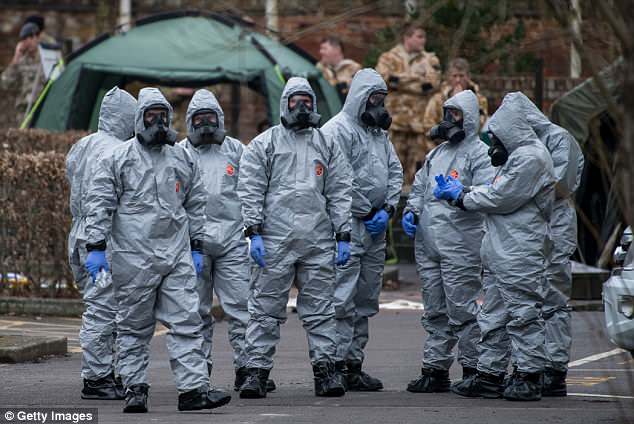 Army officers remove the bench, where Sergei Skripal and his daughter were found in Salisbury

9. The home of Sergei Skripal

Locals were told the Bourne Hill building, housing Salisbury’s police station as well as Wiltshire council’s offices will close for up to eight weeks from Friday.

Decontamination work will focus on the evidence room and two lockers inside the police station, which were sealed off following the attack on March 4.

The decontamination work will focus on the evidence room and two lockers inside the station, which were sealed off after the March 4 attack.

Deputy Chief Constable Paul Mills from Wiltshire Police said it would be ‘business as usual’ as operations move to other sites in and around the city.

Other areas earmarked for chemical cleaning include two ambulance stations, a car compound and the home of poisoned police officer Nick Bailey.

Mr Skripal’s home, which is still part of the police investigation, will be the last to be decontaminated. 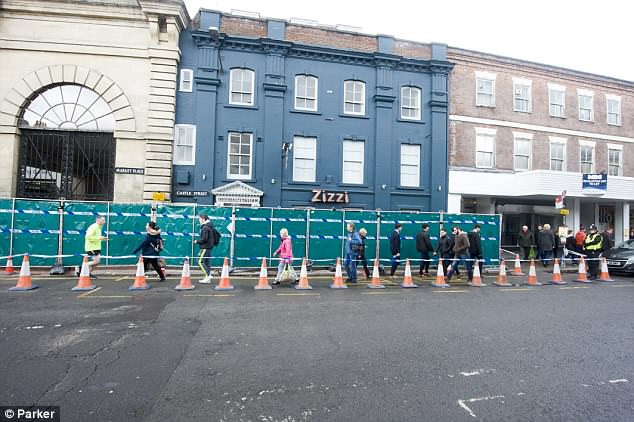