Former soldier, 85, among dozens of rough sleepers living at Heathrow during coronavirus lockdown

An 85-year-old former solider is one of around 30 homeless people sleeping at Heathrow Airport because their immigration status has left them unable to claim benefits – including emergency accommodation – during the coronavirus pandemic.

Mike, who did not want to reveal his last name, told MailOnline he had been sleeping in Terminal 5 since lockdown started three weeks ago after being ordered to leave a hostel he was staying in. Prior to that he was sleeping rough.

The pensioner, who originates from Canada but was in the process of also applying for British citizenship before the coronavirus crisis said: ‘My immigration status is a bit complicated. I don’t want to tell you too much because I could get into trouble and I have enough problems already.

‘There were a lot more homeless people sleeping at the airport a few weeks ago but most of them were found accommodation. But I think because I’m not British and because of my age, nobody is helping me.’

Mike, above, served in the Canadian armed forces. He said his past experience of being in the military means he’s ‘not afraid of challenges’. He has  been sleeping in Terminal 5 since lockdown started three weeks ago after being ordered to leave a hostel 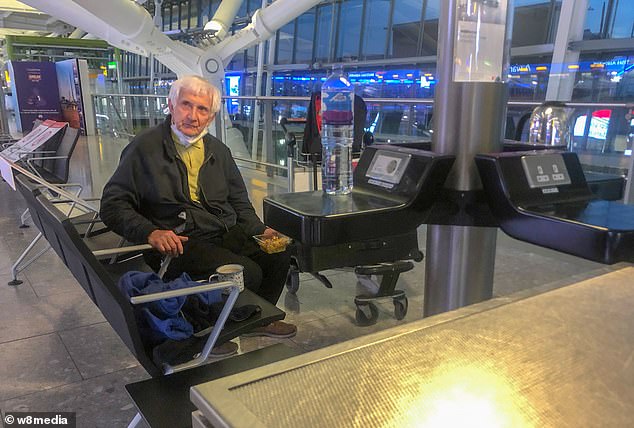 Mike is in the at-risk category for contracting the killer bug but said that ‘nobody is helping me’. He says he lived on a diet of takeaway food and tea he makes using his own kettle. All his worldly possessions are in a large black suitcase which he carries around on a Heathrow luggage trolley

Despite being in the at-risk category for coronavirus on account of his age, Mike revealed that he had served in the Canadian armed forces and that this experience was helping him get through not being in isolation during the lockdown.

He said: ‘I’m made of tough stuff and always try to stay strong and positive. When you’ve been in the military, you’re not afraid of challenges and learn how to overcome them.’ 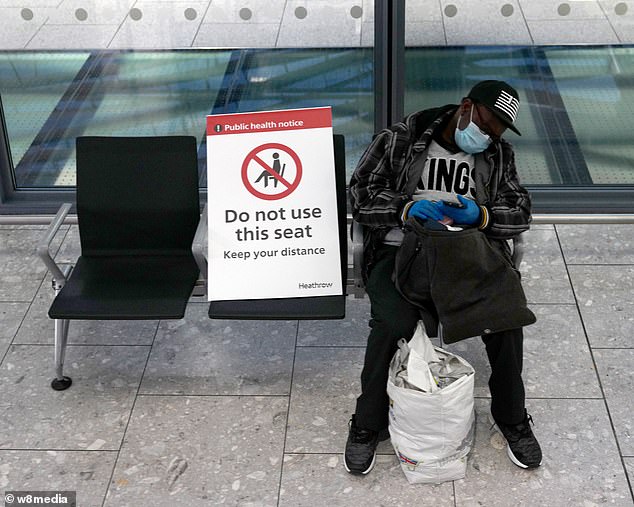 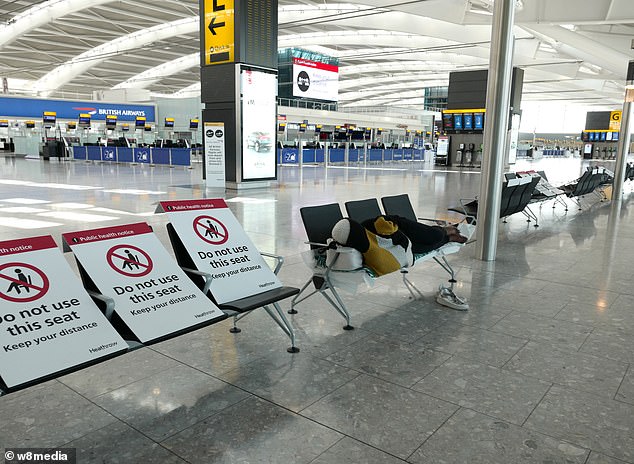 Hillingdon Council claimed it was the Ministry of Housing, Communities and Local Government that was responsible for rough sleepers at the airport. It is eerily quiet amid grounded flights during the coronavirus pandemic

Heathrow’s homeless sleepers are scattered across all of its five terminals and are made up of a mixture of migrants and British citizens.

Mike revealed that he survives on a diet of takeaway food and makes tea for himself using a kettle he owns. All his worldly possessions are in a large black suitcase which he carries around on a Heathrow luggage trolley.

He said that he tries to spend as much of the day out of the airport as he can, depending on the weather and visits a Catholic church each morning in nearby Hayes to pray for an end to the coronavirus pandemic. 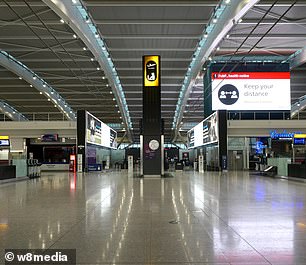 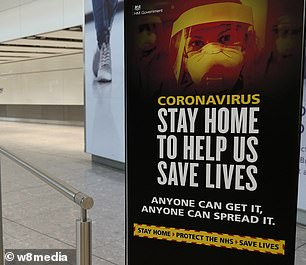 The airport is strangely quiet with very few flights arriving and departing. Above right, a government poster urges people to stay at home 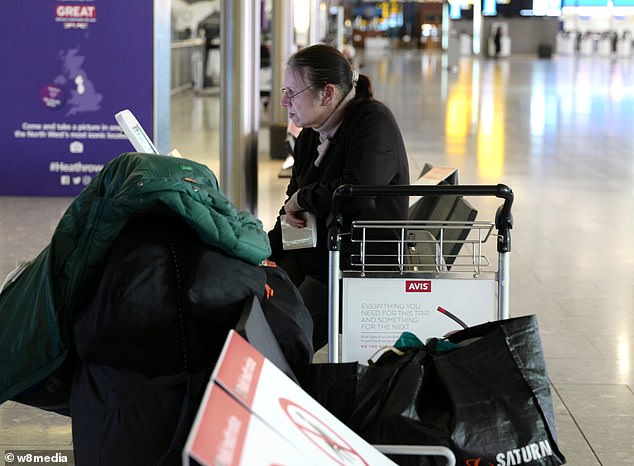 Regina, 67, is also in the at-risk category for catching Covid-19 because of her age. She is pictured above with her belongings stacked on an airport luggage trolley. She said ‘We try and help each other because nobody seems to be bothered about us’

The airport is located in the London Borough of Hillingdon.

A letter from its chief executive Fran Beasley, dated April 16, revealed the authority claimed to have taken ‘all the necessary steps in assisting known rough sleepers as required’.

In a recent bulletin from councils it was claimed local authorities could be left to front the costs of providing homeless people with no access to benefits somewhere safe to sleep. 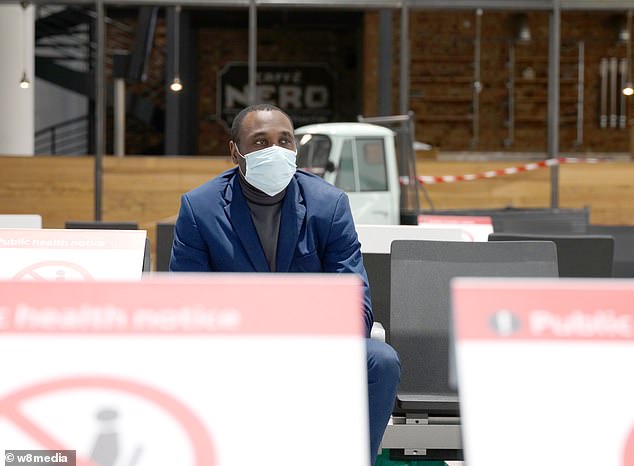 Diplomat Solomon Konjingo, above, has been waiting for a flight to Ethiopia and sleeping at the airport for the past two days. He said he has met some ‘very desperate people’ and that he felt ‘lucky’ he would be able to return to his family

Regina, 67, who sleeps a few seats away from Mike and originates from Latvia told MailOnline: ‘We try and help each other because nobody seems to be bothered about us.

‘I don’t have the right immigration status and don’t know what to do. I’m just glad that we have the airport and security here have not thrown us out.’

Sandra, another homeless person said that she spends most of the day sleeping under a blanket.

‘The airport is very quiet, there are hardly any flights coming or going and this is a good place to be at the moment. The security staff have been very kind to us and some of them have got to know me quite well,’ she added. 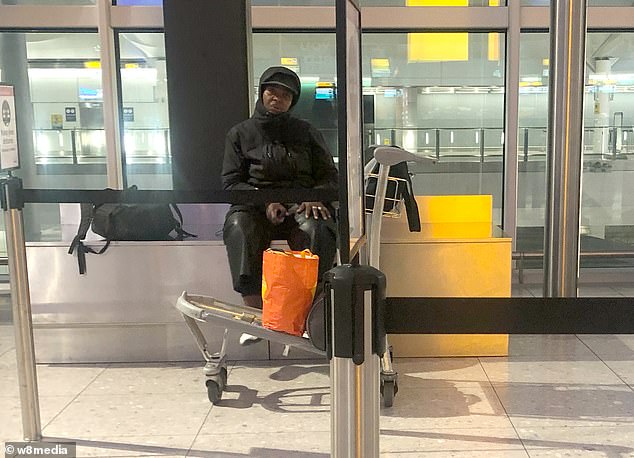 Above, another woman sits with her belongings in the airport’s terminal. The usual hustle and bustle of passengers are nowhere to be seen. The number of flights operating via Heathrow has reduced by 75% since the start of the outbreak but cargo-only flights have increased by more than 200% per week

One woman who originates from Nigeria revealed that she had been sleeping in Terminal 2 for two weeks.

She said: ‘I’m not able to return home and was in the process of trying to sort out my immigration status when the coronavirus pandemic started. I thought the authorities might help me but all we’ve been told is that we don’t have the right to be housed.

‘I don’t know if that’s correct or not but the whole situation seems very unclear.’

In Terminal 2, one man was asleep at the entrance to a toilet with one Heathrow worker revealing: ‘He’s been here since the start of the lockdown, but we don’t mind. He told us that he was homeless and had travelled down from Nottingham because he had nowhere else to stay.’ 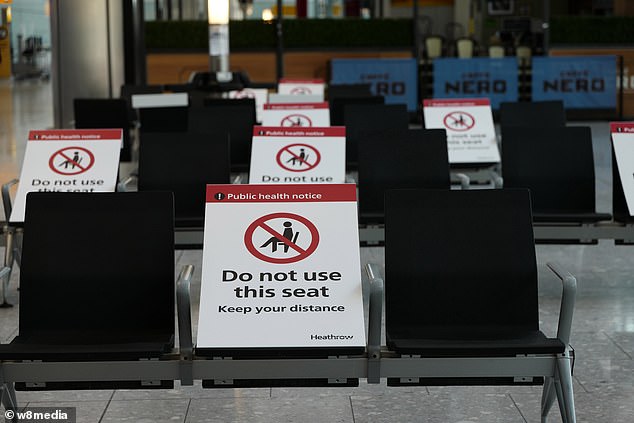 One of the reasons the airport is still open is because vital medical equipment and supplies, including ventilators, medicines, as well as food are being flown via Heathrow 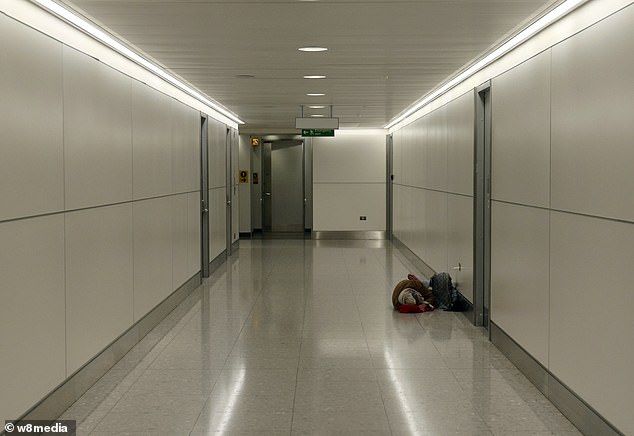 Above, a man sleeps in a corridor, one of many rough sleepers taking refuge at the airport

One Brit, who was sipping a can of lager as he sat in the terminal, said: ‘I was sleeping rough in different parts of London, but Heathrow is the best place for me to be. It’s warm, quiet and nobody troubles you.’

Diplomat Solmon Konjingo, who was waiting for a flight to Ethiopia and had been sleeping at the airport for the past two days told MailOnline: ‘I’ve met some very desperate people here. They’ve got nowhere to go, and the airport has become their home.

‘I’m one of the lucky ones because I’m will be going back to my family in Africa. But I’m really shocked because I never believed that people could be abandoned like this in a wealthy country like England.’ 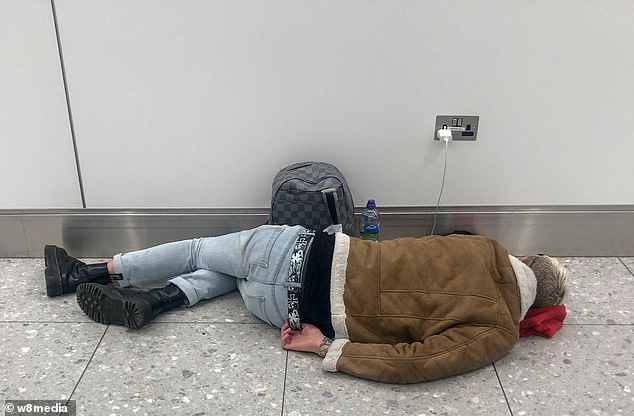 When approached for comment Hillingdon Council claimed it was the Ministry of Housing, Communities and Local Government that was responsible for rough sleepers at the airport.

‘We have offered accommodation to all of the rough sleepers in other parts of the borough,’ a spokesman said.

A Government spokesman told MailOnline today: ‘Over 90 per cent of those known to be living on the streets at the start of the crisis have been offered safe accommodation – ensuring some of the most vulnerable people can stay safe during the pandemic. This is a remarkable achievement is the result of a collaborative effort across Government and with local authorities, health providers and charities.

‘This is backed by £3.2billion of Government funding for local authorities as part of the wider government response to the coronavirus pandemic.’