Former Texas Tech basketball star Andre Emmett, 37, is ‘shot dead in Dallas as he ran away from two unknown suspects who confronted him outside his residence’

Former Texas Tech basketball star Andre Emmett has been shot and killed in Dallas, according to multiple reports

Former Texas Tech basketball star Andre Emmett has been shot and killed in Dallas, according to multiple reports.

According to Dallas police, Emmett was ‘approached by two unknown suspects as he sat in his vehicle in front of his residence in the 1800 block of N. Prairie Avenue [around 2:30am].

‘The suspects displayed a handgun and an altercation ensued, during which the victim was shot as he ran away from the suspects,’ the police statement continued.

A passerby called 911 after seeing Emmett several-hundred feet from his home.

Emmett was transported to a hospital, where he ultimately died.

Witnesses told Dallas police that they saw a pair of suspects flee the scene before getting into a white Chrysler sedan.

The 37-year-old Emmett had recently become a father, according to The Athletic’s Shams Charania.

The 6-foot-5 small forward sits as the all-time leading scorer in Texas Tech history. He also had a brief NBA career that began with the Memphis Grizzlies in 2004. He recently played in the Big3 league, which is populated by former NBA and college stars.

Emmett was inducted into the Texas Tech Hall of Fame in 2018.

Over his 25-year professional career, Emmett played for 22 different teams.

Several members of the basketball community reacted to the news on Twitter. 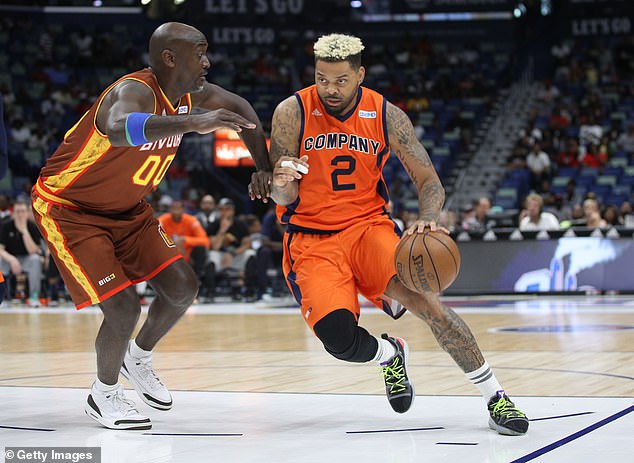 Emmett (right) had most recently played in the Big 3 League, which features ex-NBA stars

Emmett’s tenure at Texas Tech was best remembered for his interactions with hard-nosed coach Bobby Knight, who had recently joined the Red Raiders after a Hall of Fame career at Indiana.

Although he frequently drew Knight’s ire, Emmett seemed to thrived with the tough love.

‘Bob Knight was as tough on Andre Emmett as any player he coached at @TexasTechMBB,’ Fraschilla wrote. ‘(There were some legendary late night running sessions) He never cracked but, rather, embraced the coaching. Ended up scoring 2,256 points.’

Emmett had most recently played in the Big 3 league, which predominantly features former NBA and NCAA stars.

‘The BIG3 is in a state of shock over the sudden and tragic death of Andre Emmett,’ read a tweet from the organization. ‘Andre was a member of the BIG3 family for two seasons and never without a smile on his face. His kindness towards others and easy-going demeanor made him a joy to be around.’ 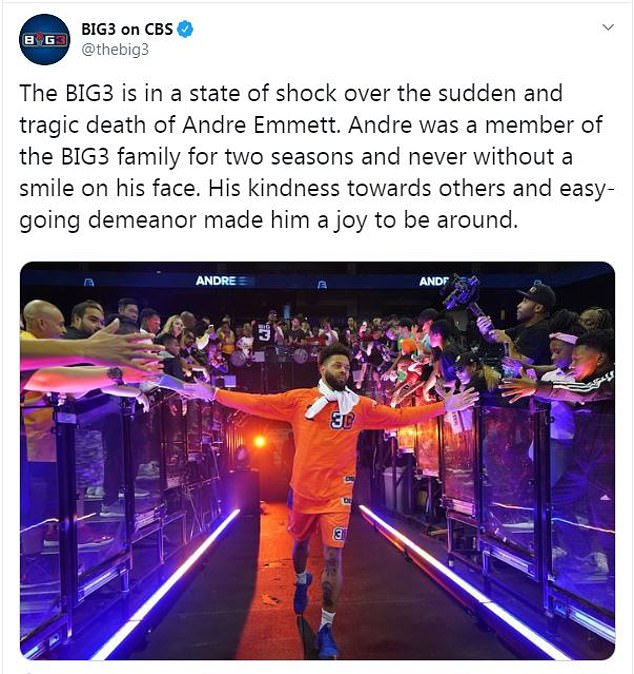