A former councillor is accused of tying up a real estate agent before allegedly shooting his own mother and brother dead in a failed murder-suicide.

Paul Cohrs, the former deputy mayor of Wentworth and acting president of a local gun club, allegedly drove to his brother Ray’s property in Rufus, in far-west NSW, with a real estate agent on Tuesday.

Police will allege he tied up the real estate agent, 55, before shooting his brother dead and then driving 120km to his mother’s home in Red Cliffs, south of Mildura, in regional Victoria.

It was there that he allegedly shot and killed his 82-year-old mother Bette, in front of her four-year-old grandson, before returning to his brother’s property to free the real estate agent.

Mr Cohrs was found suffering from a suspected self-inflicted gunshot wound at 3pm and was rushed to Mildura Hospital in a critical condition, under police guard. 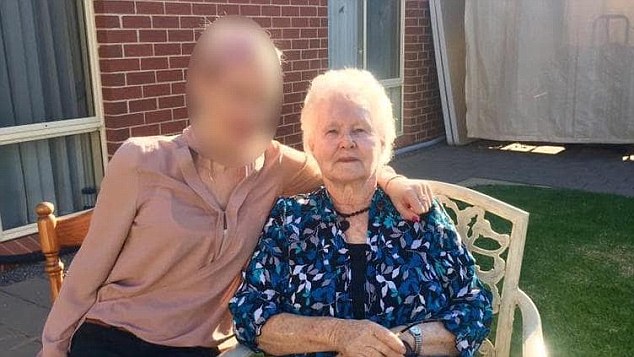 Cohrs, 58, allegedly drove to his 82-year-old mother Bette’s (pictured) house in Red Cliffs and shot her. Her four-year-old grandson was in the house at the time of the alleged shooting

Victoria Police discovered Bette’s body at her property at 12.30pm.

Police have confirmed a four-year-old child was also inside Bette’s home at the time of the shooting. The child was unharmed.

NSW police drove to the Rufus property an hour later, where they found the body of the man’s brother, whose age is unknown.

A NSW Police spokeswoman confirmed the three parties are related to each other and said officers were not looking for anyone else in relation to the incidents.

The tragic alleged double murder is understood to have been over a long-running money dispute and legal battle within the Cohrs family.

Police sources told the Herald Sun Mr Cohrs had been in a legal dispute with his family over a property and a number of family businesses.

‘The whole family situation is a mess,’ one man, who asked not to be identified, told the Herald Sun.

‘I was told they were going to sell a property without him knowing.’ 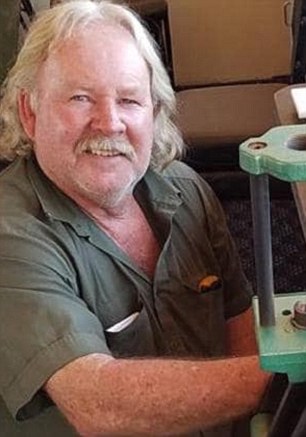 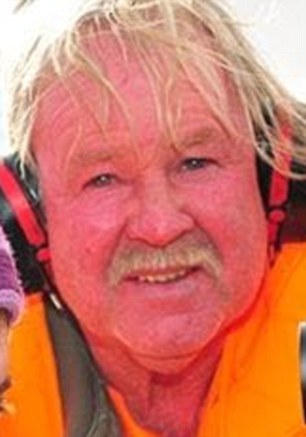 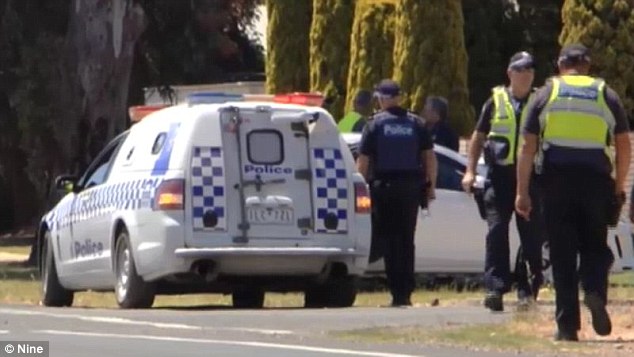 Mr Cohrs’ condition has since stabilised and he was later transferred to a hospital in Melbourne where he remains.

On Wednesday, the Sporting Shooters’ Association of Australia (SSAA) in Victoria posted a tribute to Mr Cohrs who is the president of the club.

‘We are deeply shocked and saddened by this news and our thoughts are with the Cohrs family.’

The club then edited their post and saying this could become an anti-gun issue.

‘We respect that those closest to the Cohrs family would want to keep this within their circle, however, the media have identified the Presdient of SSAA Mildura and this will undoubtedly became an anti-gun issue. 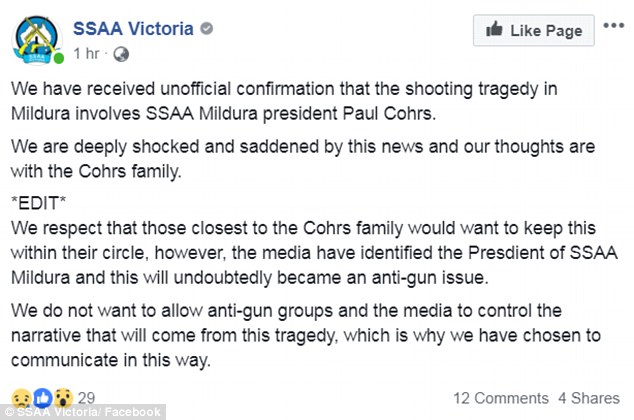 On Wednesday, the Sporting Shooters’ Association of Australia (SSAA) in Victoria posted a tribute to Mr Cohrs who is the president of the club

Neil Mitchell, 3AW radio presenter, has slammed the SSAA club for politicising the alleged murder that involved their president.

‘We do not want to allow anti-gun groups and the media to control the narrative that will come from this tragedy, which is why we have chosen to communicate in this way,’ the end of the post read.

Mr Mitchell called the post ‘poor taste and hypocritical’  because the club was ‘politicising the tragedy’.

It’s not the first tragedy that has devastated the family in recent years.

The elderly woman’s granddaughter was killed in an accident in 2016 after returning to Mildura to spend Christmas with family, according to the neighbour.

‘It was devastating for the whole family and now this tragedy, it’s just so sad,’ the neighbour said.

Homicide Squad detectives from both Victoria and NSW continue to investigate.

Anyone with information is urged to call Crime Stoppers. 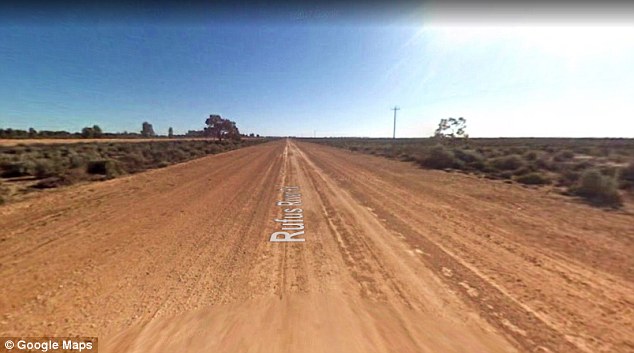 Cohr’s brother’s body was found at a property on Rufus River Road (pictured) in Rufus, which is 120km away from Red Cliffs