A mixed martial arts fighter has been arrested in Colorado on child pornography and obscenity charges.

Abel Nazario ‘Killa’ Trujillo, 35, is due in court on Thursday for a preliminary hearing in Douglas County, just south of Denver, on felony charges of sexual exploitation of a child and obscenity.

He was arrested on May 24 in Broward County, Florida, after a warrant for his arrest was issued in Colorado, according to TSN. He was extradited to Douglas County in mid-June.

Abel Nazario ‘Killa’ Trujillo, 35, is due in court on Thursday for a preliminary hearing in Douglas County, just south of Denver, on felony charges of sexual exploitation of a child and obscenity

The Colorado criminal code sexual exploitation of a child is defined as “possessing, producing or distributing sexually explicit material (pornography) involving a child under 18.”

Trujillo is understood to be charged with possession of child pornography under that section of the code.

Each charge carries a possible penalty of one year to 18 months upon conviction. 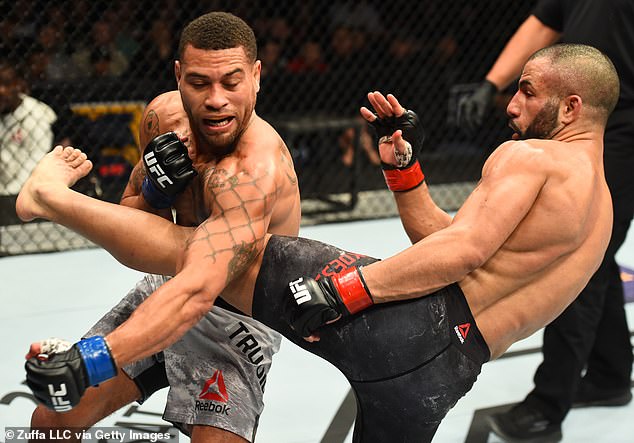 Abel Trujillo (left) is seen at UFC Fight Night in December 2017. He was expected to fight on July 27 but has dropped out of the bout following his arrest

Trujillo had been held in Douglas County Jail on a $10,000 bond but late on Tuesday booking records appeared to show his release.

He could not be reached by DailyMail.com and it was unclear whether he had an attorney to speak in his defense.

Previously, Trujillo twice plead guilty to charges of domestic abuse in Iowa. Both incidents involved the mother of his child.

Trujillo had been expected to face Will Brooks at Battlefield FC 2 on July 27, but following his arrest withdrew from the bout and was replaced by Gleison Tibau.