Former White House Press Secretary Sean Spicer has made his debut on Dancing With The Stars in a lime green frilly blouse and white pants.

The 47-year-old grinned at the cameras as he unveiled the eye-catching outfit during the opening dance number of the show’s 28th season on Monday.

Celebrities including Karamo Brown from TV show Queer Eye, The Bachelorette‘s Hannah Brown and others, walked down to the stage in fairly modest costumes.

But not Spicer, who already appeared eager to make an impression and gleefully danced to the show’s first number with other cast members. 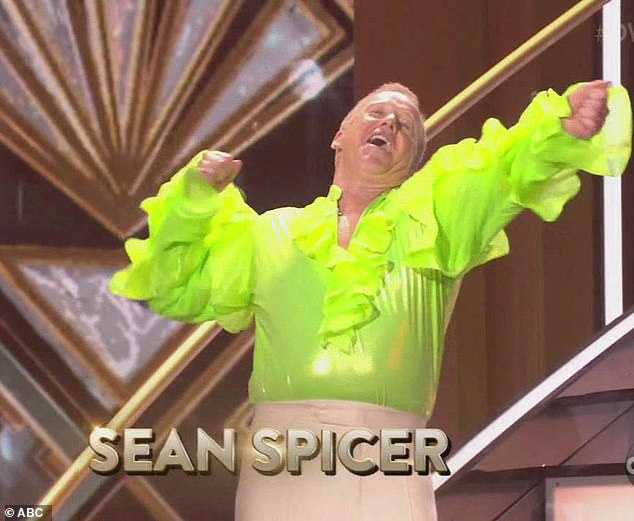 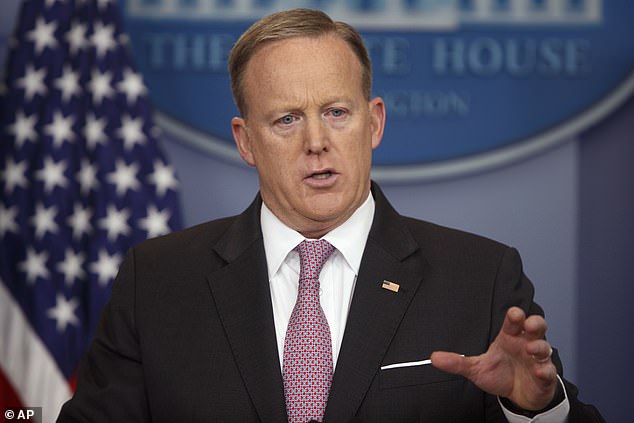 Spicer teased his shocking outfit ahead of the debut on Twitter, where he wrote: ‘I certainly haven’t forgotten and once you see the outfit I have to wear tonight you – even after lots of therapy.

‘Treat this like looking at an eclipse with a dot poked in a piece of paper.’

In response to his unusual costume, Ian Miles Cheong wrote: ‘We live in a simulation and the simulation is glitching. Here’s former White House spokesman Sean Spicer’

Wajahat Ali posted: ‘Sean Spicer got paid 6 figures for this. He’s also a Harvard Kennedy fellow. He also got a book deal. He was also laughing it up at a DC party for journalists the day before the White House Correspondents Dinner. All will fail up. It’s how this town works.’

Former Arkansas Governor Mike Huckabee wrote: ‘Wanna create an emotional meltdown in Hollyweird? Vote for @seanspicer to win “Dancing with the Stars” tonight and every night he’s on.’

Accompanying his tweet was a GIF of character Napolean Dynamite dancing from the 2004 eponymous-named teen-comedy film.

Exclusive photographs obtained by DailyMail.com on Monday showed Spicer grabbing a bite to eat in between takes and chatting to his scantily clad dance partner Emma Slater.

The pair appeared to laugh on Sunday as Slater posed with her arms in the air, dressed in a near see-through black outfit that barely covered her derriere.

Show producers faced backlash when Spicer was announced as a contestant on the ABC dancing competition – some stated it should be an ‘oasis’ away from politics.

But six-time mirror ball champion and current judge of rival show World of Dance, Derek Hough, 34, told People.com that the move was ‘predictable.’

Hough’s words followed-on from Dancing With The Stars’ host Tom Bergeron, 64, announcing he was was unhappy with the move to feature Spicer.

He told Entertainment Weekly: ‘Dancing, at its best, is an oasis, away from all the divisiveness and all the stuff we are wrestling with right now.’

Bergeron called the former-Trump man a ‘political lightning rod’ but claimed his own role on the show was ‘to be Switzerland for those two hours a week.’ 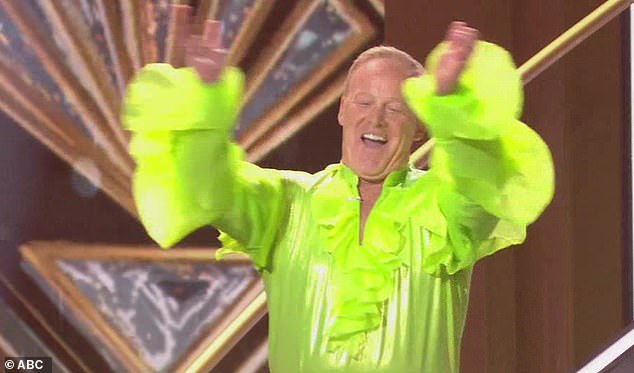 The Trump supporter will be dancing alongside partner Emma Slater 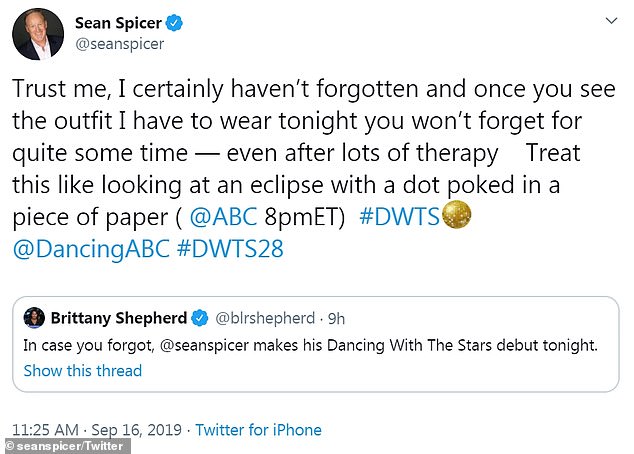 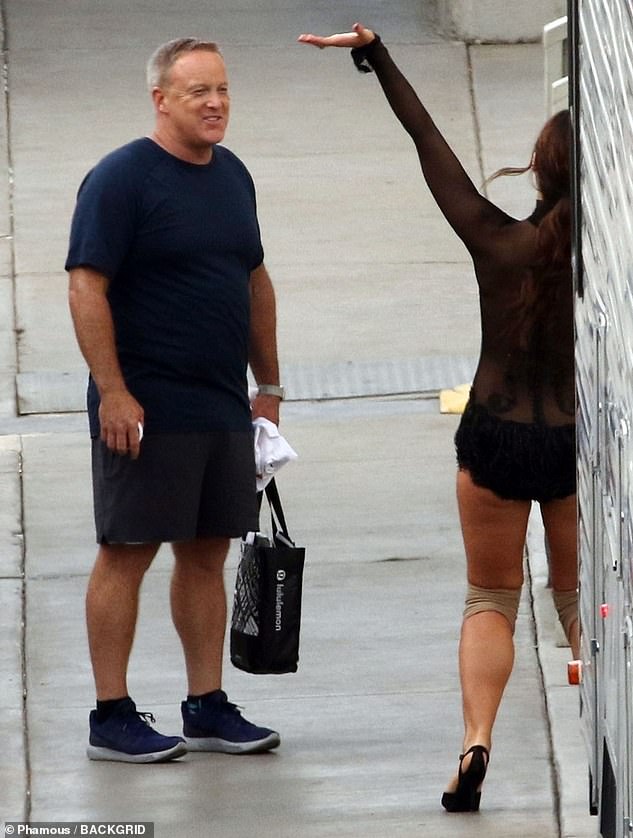 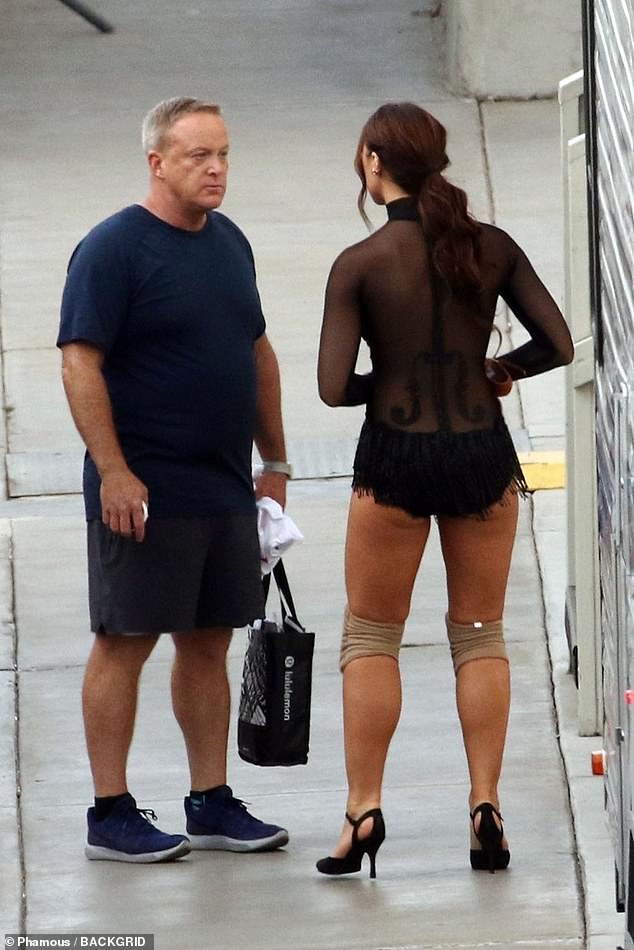 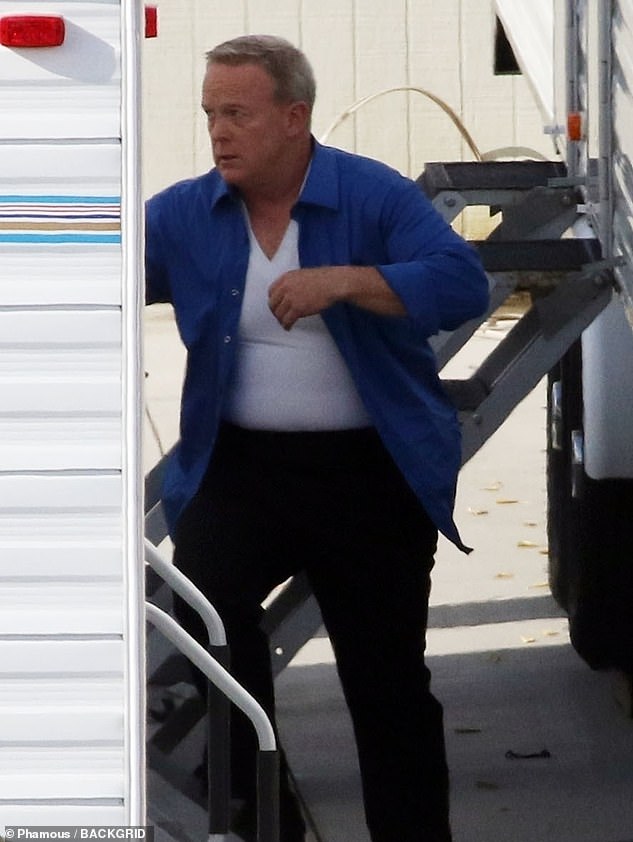 Spicer was reportedly seen grabbing a bite to eat before heading back to his trailer on Sunday, ahead of the show which stars tonight

Previously, he took to Twitter to state his discontent on August 21, writing that he believed the show should be a ‘joyful respite from our exhausting political climate and free of inevitably decision booking from ANY political affiliations.’

Bergeron added that it was the ‘prerogative’ of the producers and the network to select contestants based on the ‘best long-term interests of the franchise.’

He wrote: ‘We can agree to disagree, as we do now, but ultimately it’s their call.

‘For me, as host, I always gaze into the camera’s lens and imagine you on the other side, looking for a two hour escape from whatever life hassles you’ve been wrestling with.’

In response to criticism over his casting, Spicer told Mediaite in August that for him this was ‘an opportunity to have some fun.’

‘The idea that I need this to make myself feel better is preposterous. I’m in this because I enjoy it.  I’m very comfortable with who I am, what I believe and who I support, and that’s it.’ 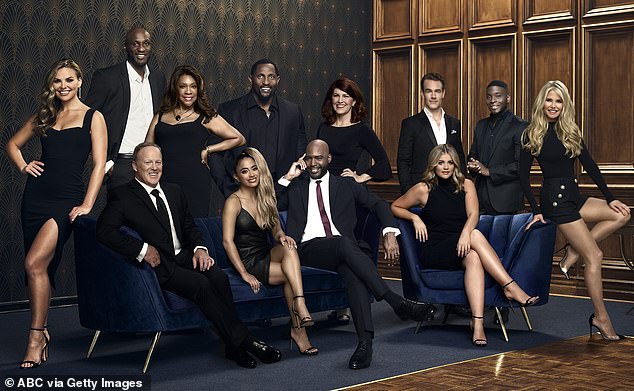 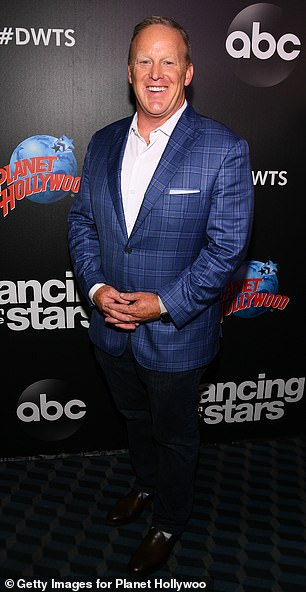 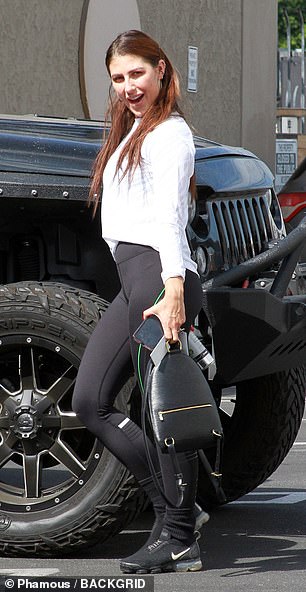 The casting of Spicer (left) led to controversial comments online, with the host of the show arguing that Dancing With The Stars should be an ‘oasis’ away from politics. Spicer will be dancing with Emma Slater (right) 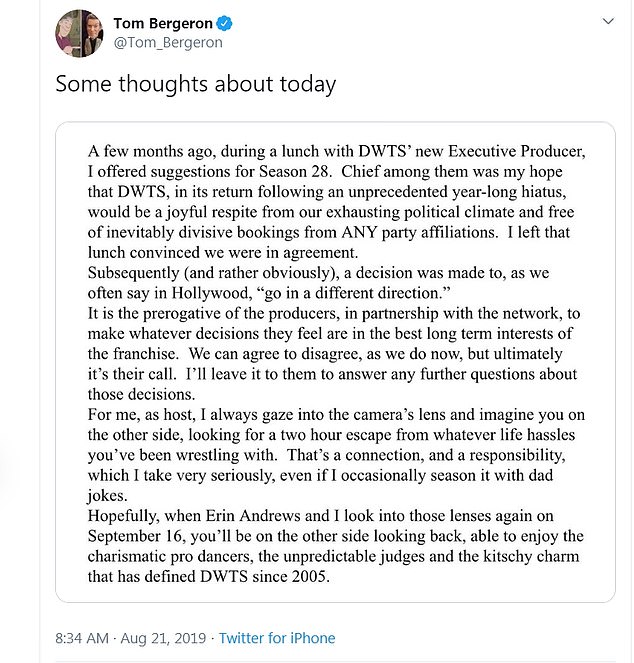 Spicer confessed to not having much experience on the dance floor other than ‘father-daughter dances.’

Speaking directly of Bergeron’s opposition he added:: ‘My hope is that he sees how bringing diverse group of people can help instill a greater degree of stability and respect among people in this country.’

The show will air tonight at 8pm ET on ABC.