Forty-something celebrities with the bodies of athletes are spoiling beaches, writes SARAH VINE

We are forever hearing how images of skinny models in the Press and on social media put pressure on young girls to aspire to unrealistic body shapes.

And there is no doubt they do. But lately the rot has started to spread — to the older generation.

Where once a woman of a certain age might have been allowed a few extra lumps and bumps here and there, the legacy, perhaps, of a couple of kids and a more sedentary lifestyle, now the world seems awash with middle-aged women with the kind of lean, sculpted physiques more characteristic of a twentysomething athlete. 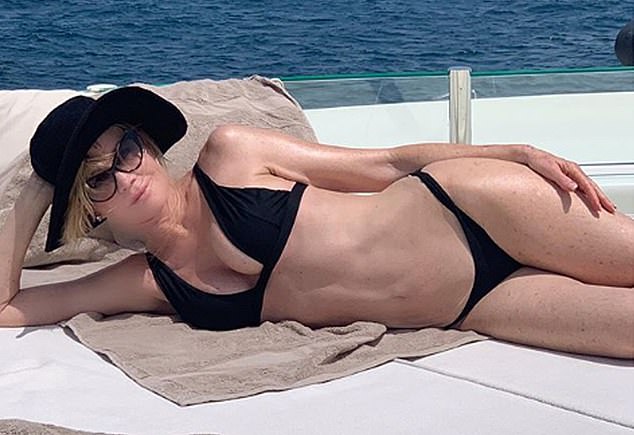 Melanie Griffith, 61, sunbathes as her boat calmly bounces on top of the waves in a picture that is believed to have been taken in Spain

Welcome to the world of the firm fatales. They’re not especially muscly, in a body-builder way — that would put them in an entirely different league — but these bodies simply do not have an ounce of excess body fat or cellulite.

Their number is growing, and will proliferate further as the hot weather drives women to enthusiastically peel off their clothes and display their ‘homework’.

Last weekend, it was Loose Women presenter Andrea McLean, who posted a photo on Instagram of her gloriously toned figure in a bikini. Andrea, who will turn 50 in October, wrote that she had long felt uncomfortable in swimwear but wanted to ‘stop giving a damn’ and help other women feel confident on the beach.

But no viewer could help but feel that she had little to worry about when it came to showing off her long, lean limbs.

A few days earlier, movie star Melanie Griffith, 61, had uploaded a video of her intense gym workout, praising the personal trainer who kept her body ‘tight and strong’. She followed it up with the fruits of her labours: a photo of herself in a tiny black bikini, lounging on a yacht, stomach impossibly, eye-catchingly toned. 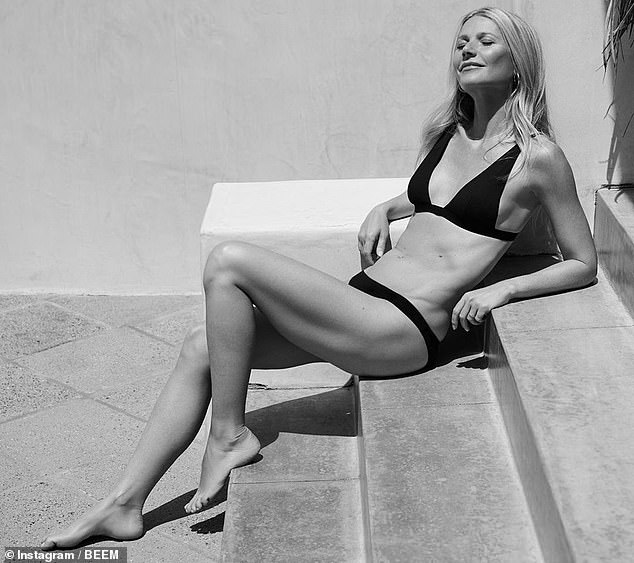 Gwyneth Paltrow, 46, shows off her flat chest and bikini body as she models swimwear available in her store Goop

Chief among the firm fatales, of course, is Gwyneth Paltrow, who, at 46, seems more lean and lithe than she ever did as a 20-year-old model. She recently posed in a black £285 bikini from her Goop range, but it was her incredible physique — rather than the eye-watering cost of itsy-bitsy pieces of fabric — that drew the most comments from fans.

Also leading the charge is Davina McCall, 51, whose rock-hard body must carry the same sort of fat ratio as a seven-year-old boy. Then there’s Lilly Becker, ex-wife of Boris, and model Heidi Klum, neither of whom will see 40 again.

A healthy body fat ratio for a woman over 40 is between 23 and 35 per cent. That gives you a bit of softness, a bit of ‘give’. A slight ‘overhang’ on the hips in a tight pair of knickers, perhaps, and a tummy you can poke a finger in.

These women have bodies where the skin is pulled so tightly over their muscles and bones, that to touch, it must feel like prodding a stiff, new, leather armchair.

Am I, at 52, really expected to aspire to the kind of aesthetic that can only be achieved through hours of obsessive work-outs to produce the sub-20 per cent fat ratio necessary to be this firm? To restrict myself to a diet plan so joyless that even the thought of a nice piece of buttered toast could land me an extra 20 push-ups? 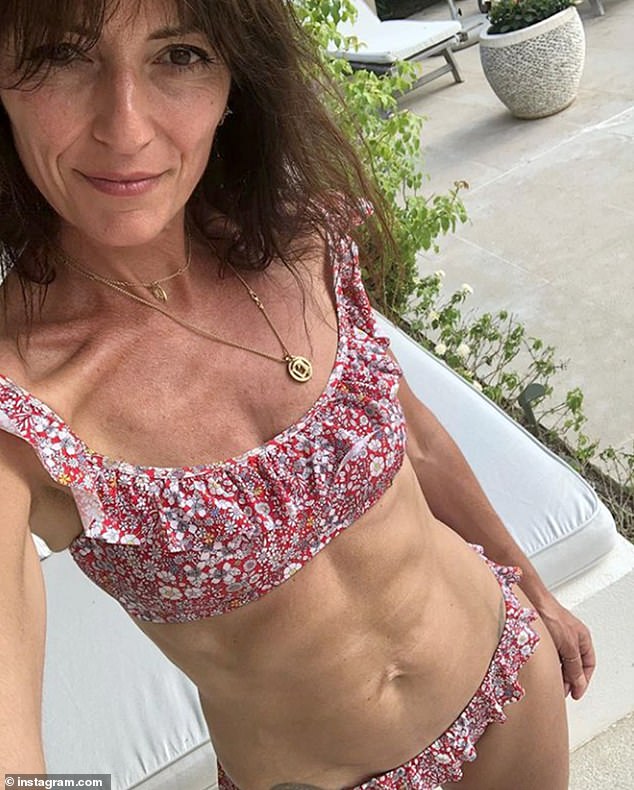 Davina McCall, 50, displays her abs and amazing physique in a summer selfie on Instagram

Don’t get me wrong, I’m well aware of the pitfalls of mid-life obesity and the need to keep things in check. But this is not about maintaining a healthy body weight. It’s a whole other level of narcissism, a totally different kind of body tyranny — made worse by the fact that for most ordinary women the time and money required to sculpt one’s body to such levels of perfection are simply unrealistic.

It’s always struck me as curious, not to mention slightly alarming, the way women’s body shapes have, over the centuries, been subject to the vagaries of fashion.

The rotundness of the Renaissance reflected a certain luscious sensuality; the Victorians kept female sexuality in check through tight corseting. In the Twenties, an androgynous shape was considered all the rage, while an hourglass was preferable in the bountiful Fifties.

Quite what it says about today’s culture that the ideal of feminine beauty seems to be bodies without an ounce of fat or trace of softness to them is anyone’s guess. Probably testimony that we spend too much time on Instagram and not enough in the real world, where everyone manages perfectly well with the extra lump or bump here and there.

But also, I fear, we harbour a fundamental fear of our own femininity. Because while all these bodies are unmistakably those of females, they are oddly unwomanly. They lack that natural softness that characterises the female.

They are hard, uncompromising, angular, not least because, post 40, the only way most women can be sure of carrying off a string bikini is if they can obliterate every errant trace of stubborn fat from their bodies. I only hope, for their sake, that it’s worth it.