The population of reef sharks has declined nearly three-fold for nearly 7,000 years, due in large part to human exploitation, a new study has revealed.

The research compared the abundance and variety of shark scales from an ancient Panamanian reef to those seen in reef sediments today and determined that a large number of species saw declines, especially those that are swifter swimmers.

The findings suggest that sharks in the Caribbean Panama were most heavily impacted over the past 100 years.

‘We found that the biggest decline in shark abundance, according to these records, occurred in the latter half of the 20th century,’ said UC Santa Barbara ecologist Erin Dillon in a statement.

Last month, a separate study from Yale University found that more than 90 percent of the planet’s sharks disappeared 19 million years after analysis of fossilized shark teeth and scales.

The researchers also pointed out that certain species of shark, like requiem or hammerheads, declined at a faster rate than others, like the nurse shark, but eventually, all species declined, for a number of reasons.

‘These results give us new insight into what a ‘healthy’ shark community might look like on a coral reef before human exploitation,’ Dillon added. 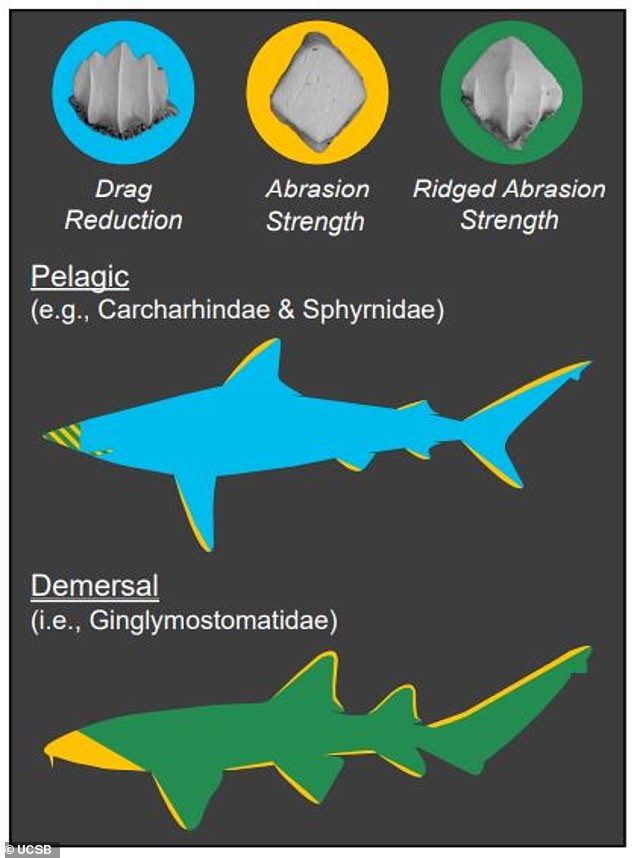 It stems from human activities, as well as a loss of habitat and prey 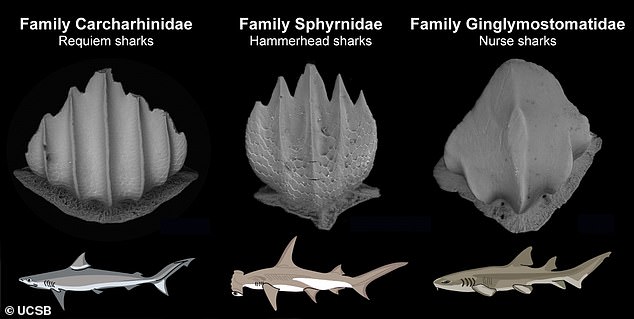 Experts compared shark scales from an ancient reef to present-day reef sediments. A large number of shark species saw declines, especially swifter swimmers. Certain species of shark, like requiem or hammerheads, declined at a faster rate than others 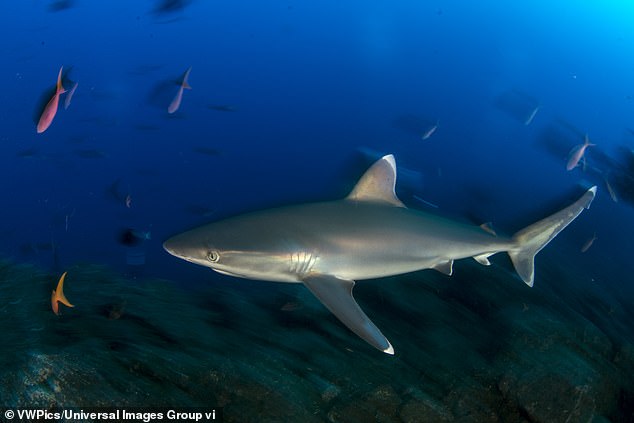 It’s likely the decline has stemmed from overfishing, as well as a loss of habitat and possibly prey

‘And they can help us set more appropriate and location-specific baselines for management and conservation.’

‘If fishing were the only driver, then we wouldn’t expect to see such a big drop in nurse sharks over time because they have low commercial value and are rarely targeted by fisheries in the region,’ Dillon explained.

That suggests that the loss of shark may have stemmed from overfishing, as well as a loss of habitat and possibly prey.

Sharks are largely made of cartilage and leave little behind in the way of fossil evidence, but shark scales, under the right conditions, can help researchers analyze ancient species because of their dentin composition with a surface made of hard enamel, similar to teeth.

In their research, the experts looked at the reef in Bocas del Toro, on Panama’s Caribbean coast with radiometric dating to determine that the reef was around 7,000 years old. 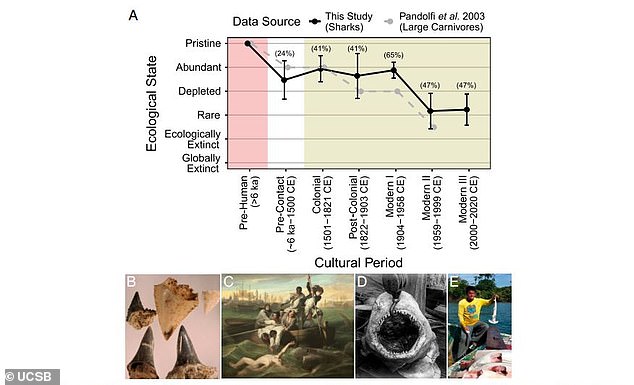 Sharks in the Caribbean Panama were most heavily impacted over the past 100 years, the researchers said

From there, they collected sediments within the fossilized reef and put the denticles into a ‘glorified vinegar’ solution to sort the denticles from the sediment.

They found that sharks such as great hammerheads and silky sharks that swim fast had thin scales with points, while nurse and zebra sharks had thick, plate-like scales, which Dillon described as ‘sort of like armor.’

‘We showed that tiny shark scales can be well-preserved and found in high enough abundances to reconstruct shark baselines over long ecological timescales,’ Dillon added, ‘and we found about a 71% decrease in total shark abundance between the mid-Holocene — before major human impact in our study region — and now.’

The study has been published in the Proceedings of the National Academy of Sciences.

In July 2020, researchers found that shark populations have gone missing from nearly 20 percent of the world’s coral reefs.

One month later, a separate study was published that found that after hunting at night, gray reef sharks return to the same spot on the reefs and stayed in a stable group of other gray reef sharks.