Fossils: Modern mammal ancestors were not held back by the dinosaurs – but by OTHER early mammals

Our ancestors and those of other modern mammals were not held back by the dinosaurs, but by other early mammal lineages, a study has concluded.

It was assumed that mammals lived in the shadow of the dinosaurs, who filled many ecological niches, thus keeping mammals small and generalist in lifestyle and diet.

And when the non-avian dinosaurs went extinct 66 million years ago, the theory argued, this allowed mammals to radically diversify to occupy the vacated niches.

Yet statistical analyses of fossils made by experts from the universities of Oxford and Birmingham have suggested that other mammals were the real obstacles.

It was not until these early mammals died out, freeing up the ecological niches they had filled, that the ancestors of modern mammals were able to hit their stride.

Our ancestors and those of other modern mammals were not held back by the dinosaurs more than 66 million years ago — but by other mammals, a study found. Pictured: a large Gobiconodon, an early mammal, competing with an ancestor of modern mammals

‘There were lots of exciting types of mammals in the time of dinosaurs that included gliding, swimming and burrowing species,’ explained paper author and palaeontologist Elsa Panciroli of the Oxford University Museum of Natural History.

‘But none of these mammals belonged to modern groups, they all come from earlier branches in the mammal tree.

‘These other kinds of mammals mostly became extinct at the same time as the non-avian dinosaurs, at which point modern mammals start to become larger, explore new diets and ways of life.

‘From our research it looks like before the extinction it was the earlier radiations of mammals that kept the modern mammals out of these exciting ecological roles by outcompeting them.’

In their study, Dr Panciroli and colleagues used statistical methods to look at how constrained the evolution of various mammal groups really was before and after the Cretaceous–Paleogene mass extinction that killed the dinosaurs.

The study included measurements of the anatomy of all the different kinds of mammals that were contemporaries of the dinosaurs, including the ‘therians’, who were the ancestors of modern mammals.

The team looked specifically for the point where evolution stopped producing new features — such as changes in the sizes of teeth and bones — and instead reproduced traits that had already evolved in other lineages.

From this, they could determine the ‘evolutionary limits’ placed on different mammal groups, showing where they were being excluded from different ecological niches by means of competition with other animals.

And these findings indicated that the biggest constraints on our ancestors were not coming from the presence of the dinosaurs, but thanks to competition from other species of early mammals, who were under less stringent constraints.

Because of this, the team explained, while early mammals were experimenting with different diets, larger body sizes and novel ways of life like climbing gliding, they were excluding the therians from these lifestyles, keeping them small and generalist.

‘This result makes very little sense if you assume that it was the dinosaurs constraining the therians,’ said paper author and palaeontologist Neil Brocklehurst, also of the University of Oxford.

‘There is no reason why the dinosaurs would be selectively competing with just these mammals and allowing others to prosper. It instead appears that the therians were being held back by these other groups of mammals.’ 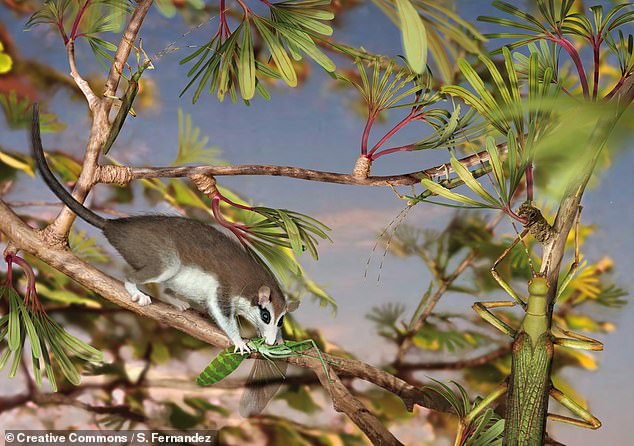 In their study, Dr Panciroli and colleagues used statistical methods to look at how constrained the evolution of various mammal groups really was before and after the Cretaceous–Paleogene mass extinction that killed the dinosaurs. Pictured: Eomaia, an early therian

The team found more evidence in support of their theory when they looked at mammal body sizes, finding that both the small and large mammals showed the same release from evolutionary constraints following the death of the dinosaurs.

‘Most of the mammals that lived alongside the dinosaurs were less than 100g [3.5 oz] in body mass — that’s smaller than any non-bird dinosaur,’ said paper author and palaeontologist Gemma Benevento of the University of Birmingham.

‘Therefore, these smallest mammals would probably not have been directly competing with dinosaurs. Despite this, small mammals show diversity increases after the extinction which are just as profound as those seen in larger mammals.’

‘Palaeontology is undergoing a revolution. We have greatly expanded the toolkit available to analyse large datasets and directly test our ideas about evolution,’ added Dr Brocklehurst.

‘Most studies of the mammal radiation have focused on how fast they evolved, but analysing what limits there were on the evolution provides new perspectives. We have had to rethink many of our theories using these state-of-the-art approaches.’