Fotis Dulos tells prosecutors to ‘bring it on’ after arraignment

The lawyer of the ex-husband of missing Connecticut mother Jennifer Dulos told prosecutors to ‘bring it on’ after being arraigned in court for a second time on tampering with evidence charges in connection with her death on Thursday.

Fotis Dulos appeared briefly before a judge in Norwalk, Connecticut, on Thursday then stood quietly next to his attorney, Norm Pattis, afterwards while Pattis read a statement.

He has now been charged twice with tampering with evidence by prosecutors who say he was caught dumping trash bags which contained blood-soaked items of Jennifer’s clothing on May 24, the day she vanished, with his girlfriend.

They also say they found traces of her blood in seats that were removed from the car Dulos was driving that day.

Despite their apparent DNA evidence, they have not charged him with killing or assaulting her. Neither Jennifer nor her remains have been found.

The pair were in the midst of a bitter divorce battle when she disappeared after dropping their five children off at school.

Dulos, who is Greek, insists that he had nothing to do with her disappearance. His attorney has publicly accused Jennifer of staging her disappearance in a ‘Gone Girl’ style plot and has also suggested that she may have killed herself.

Fotis Dulos in court in Connecticut on Thursday with his lawyer, Norm Pattis. He has pleaded not guilty to tampering with evidence charges

On Thursday, he challenged prosecutors, telling reporters after his client’s hearing: ‘Here is our message to the state of Connecticut: Mr Dulos is not guilty, when you’re ready to try a case based on appropriate evidentiary standards in a court of law, you’ll know where to find us.

‘We’ve got three words for the state. Bring it on.’

The judge issued a gag order to stop Pattis and prosecutors from discussing the case publicly.

He scolded Pattis for permeating a theory that Jennifer killed herself or staged her disappearance in a ‘Gone Girl’ style plot, and also said information from the police department had been leaked.

‘The problem with pervasive information or misinformation in the social media age is that in a high-profile case, it carries the potential to overwhelm the vital, constitutionally guaranteed right to a fair trial.

‘The extent and the nature of the coverage is not merely a result of the public record of the case, but rather, it reflects the tendency of some to fan the flames of publicity by providing the media with salacious, inadmissible, and often prejudicial details,’ Superior Court Judge John Blawie said. 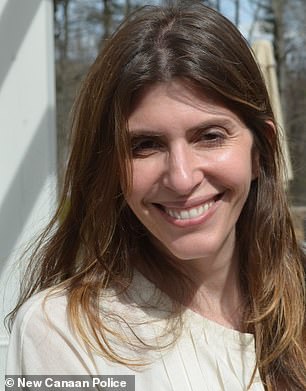 Before his second arrest, Dulos gave an interview to NBC’s Dateline where he said he thought his wife was still alive.

He also said he had a ‘beautiful life’ with his girlfriend Michelle Troconis, who has also been charged.

Troconis confessed to police in an August interview that she lied when she said she’d been with Dulos the morning Jennifer vanished, admitting that she did not in fact have an alibi for him.

He had given her ‘alibi scripts’ to recount to detectives, his arrest warrant claims, including that they spent the morning in the shower together.

Dulos was married before his fateful union with Jennifer Farber. He tied the knot with Hilary Aldama in Athens, Greece, in 2000.

Like both Fotis and Jennifer, Aldama is a graduate of Ivy League Brown University, although she was 10 years younger than her first husband.

The union lasted for just four years and the couple did not have any children. Dulos went on to marry Farber just six weeks after his divorce from Aldama was finalized and the newly married couple lived in the house in Canton, Connecticut, that Dulos was awarded in his divorce. 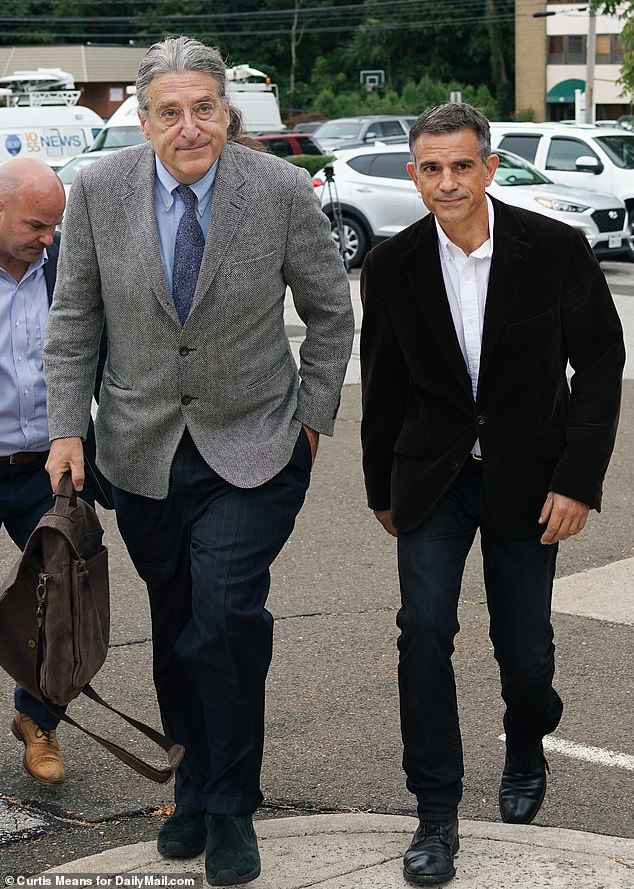 Dulos and his lawyer are shown arriving for court on Thursday. He was arrested for a second time last week 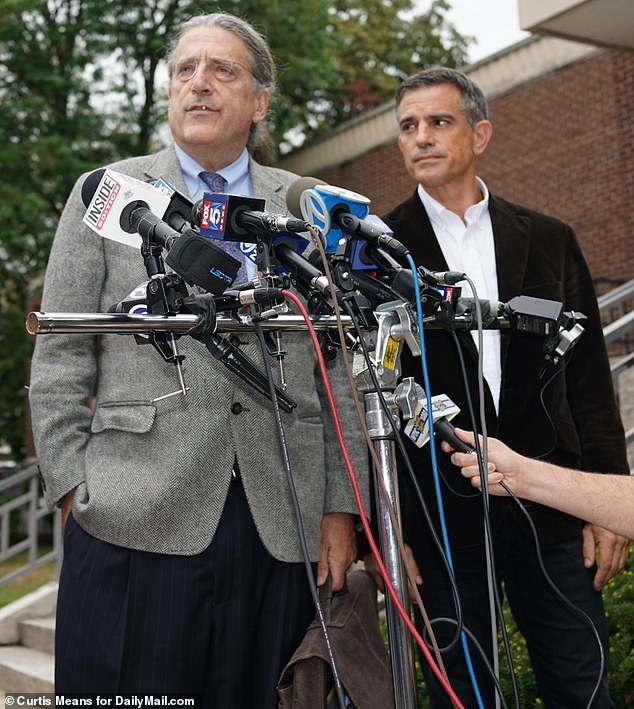 After the hearing, Pattis made a bold statement where he challenged prosecutors to ‘bring it on’

Aldama went on to be a corporate lawyer in Shreveport, Louisiana, and married local businessman Ryan Wooley.

She had twins — a boy and a girl — who were born a month prematurely in 2011. Their health struggles led her to become active in the March of Dimes, she told the Shreveport Times.

When approached by DailyMail.com at her three-bedroom home south of downtown Shreveport, Aldama, now 42, declined to comment on either her marriage or her former spouse’s arrest.

The warrant revealed chilling new allegations including that he removed the seats from the employee’s car he had used on the day Jennifer vanished and told that employee to ‘get rid’ of the vehicle.

When prosecutors tested the seats, they said they found Jennifer’s blood on them. 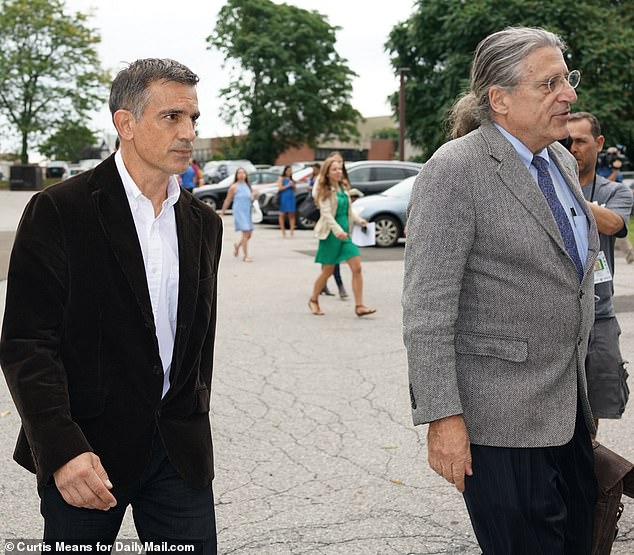 Dulos with his attorney leaving court. He said he had a ‘beautiful life’ before his wife disappeared

They also say that he was ‘lying in wait’ for the mother in her rented home, waiting for her to return from dropping their children off at school.

They believe Dulos then attacked her in their home at around 8am. At 10am, they say he drove her car, with her in it, out of the home.

In his Dateline interview, Fotis insisted he had never been violent towards her, despite her claiming in divorce court documents that she was afraid of him, saying: ‘There was never, never, never any violence, any abuse in any way.

‘Jennifer and I didn’t even really argue all these years. I’m not putting the blame on her or me.

‘Nothing went catastrophically wrong, people sometimes just fall apart… It was going to be an amicable divorce. One day she just took the children and disappeared. She hired bodyguards and went to New York.

‘It just happens, and it happens all the time,’ he said, in an apparent explanation of why they separated.

He said he believed she was still alive and that he wanted her to ‘show up’ to ‘sort this mess out’.

‘I wish she were here to sort this mess out. And I’m still hoping that she’s going to show up,’ he said.

While he said he could not discuss the case, he did not hurt Jennifer nor have anything to do with her disappearance.

He also said she was a ‘great mother’ and said he thinks she is still alive.

‘She was a great mother. I think she was an excellent mother. 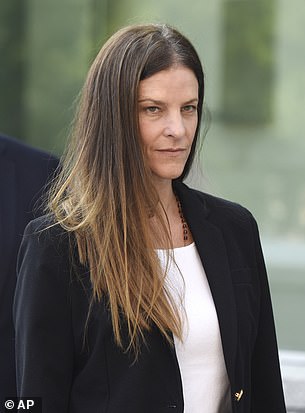 ‘And I hope that she continues to be an excellent mother,’ he said.

Asked by host Dennis Murphy if he believed his estranged wife was still alive, he replied: ‘I do.’

Murphy responded: ‘Against all the circumstantial evidence…’

Dulos interjected: ‘I’d like not to discuss this… per my attorney’s advice.’

Asked if he had ‘anything to do’ with her disappearance, he said: ‘I did not. But I’d like to leave it at that.’

He and Jennifer had been married since 2004. They met at Brown University and tied the knot within weeks of his first divorce.

She discovered that he had been having an affair with Troconis and fled in the middle of the night, prompting him to call 911 and spark a bitter divorce feud.

Among allegations in the divorce documents is a claim from her family – who are wealthy – that he owes them $2million.

He said it was ‘laughable’ that he owed them the money and that it was a gift.

Also in those court documents, Jennifer said she was terrified of him and that he had threatened her with ‘sickening revenge fantasies’ if she ever filed for divorce.

He previously claimed publicly that she had staged her disappearance or had even killed herself in a Gone Girl-inspired plot.

Pattis said his belief is based on a manuscript for a book that Jennifer wrote 17 years ago.

In his Dateline interview, he said: ‘I’ve read her novel I’ve got a copy of it.’

He said it was not exactly like Gone Girl but ‘it’s close’.

Asked what he believes it said about Jennifer, Pattis – whose comments have sickened Jennifer’s family and friends – said: ‘Desperate, frantic, concerned that Fotis may be having more time with the children. creative, had the ability to think outside the box. We don’t know where she is.

‘She may well have killed herself. We don’t know.’