Germany and Italy have now joined Ireland and Spain on the list of countries that may lose their matches at Euro 2020 because they have refused to agree to a minimum number of fans.

Each host city was asked to confirm the number of fans it could safely accommodate in light of the coronavirus pandemic by the end of play on Wednesday, with UEFA wanting them to sign up to 25% of their stadiums’ capacities.

And on Friday, UEFA has revealed what each city and its government has committed to.

While the Irish government made clear this week it would not agree to minimum spectator levels at this stage, and Spain revealed it was struggling to reach agreement on a figure, the surprise is that two European football giants have also declined to meet UEFA’s request.

As a result, the matches in Munich, Rome, Dublin and Bilbao are all under review.

‘The four cities have until April 19 to provide additional information on their plans and final decisions will be made on that date regarding the staging of matches in those four venues,’ UEFA said in a statement. 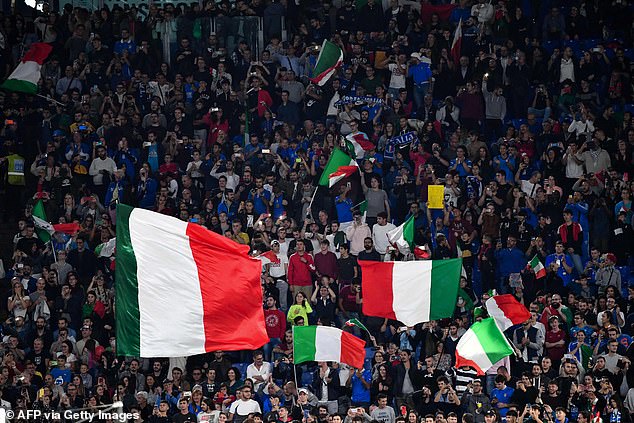 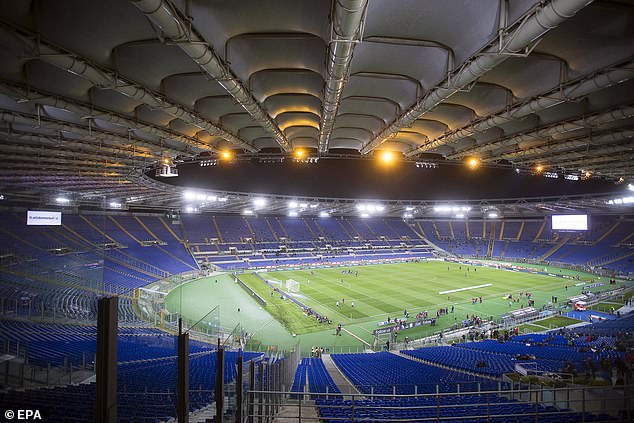 Almost as surprising is Budapest in Hungary, which has committed to 100% attendance at the 38,600-seat Ferenc Puskas Stadium.

And UEFA has also confirmed only three countries will grant exemptions to allow fans to travel to watch matches. They are Azerbaijan, Hungary and Russia.

Germany and Italy’s position is particularly unexpected because on Wednesday reports suggested both nations had committed to fans being present.

The local authorities in Munich said it it was ‘desirable’ for fans to be in the stadium for the four Euro 2020 matches.

However, Sportsmail understands this view was not endorsed by the federal government since Germany remains gripped by a third wave of coronavirus infection. 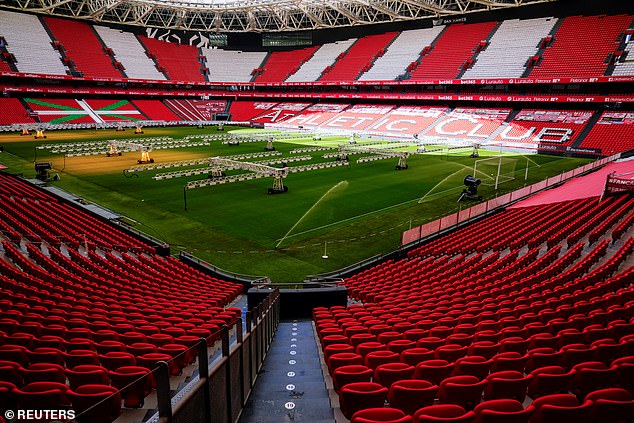 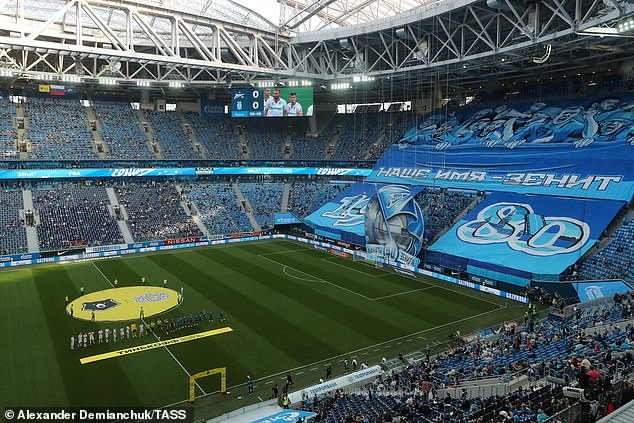 In Italy, Health Minister Roberto Speranza informed the country’s football federation on Tuesday that fans can attend the four matches in Rome’s Stadio Olimpico, which is due to host the opening game between Italy and Turkey on June 11, based on protocols from scientific advisors.

But confidence appears to have ebbed away in the days that followed, with more than half the country – including Rome and Milan – already under restrictions imposed on 15 March, which saw restaurants and schools once again closed.

The question now is would UEFA dare strip Germany and Italy of their matches?

‘Germany is the most powerful FA in Europe,’ said a source close to the tournament planning. ‘It’s hard to see Munich being kicked out of the competition.

‘Italy is a big FA, too. There will be fans in Rome, it is just a question of how many.’ 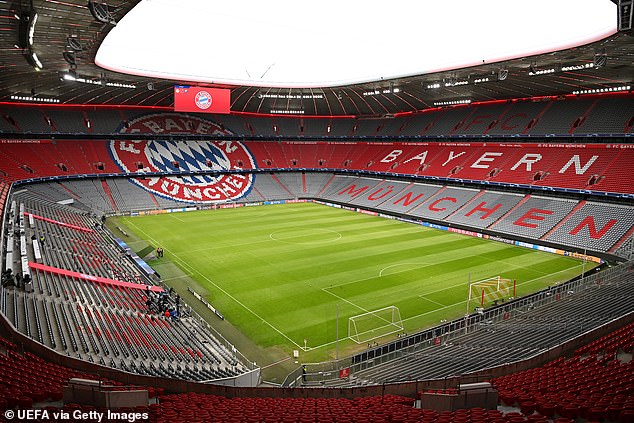 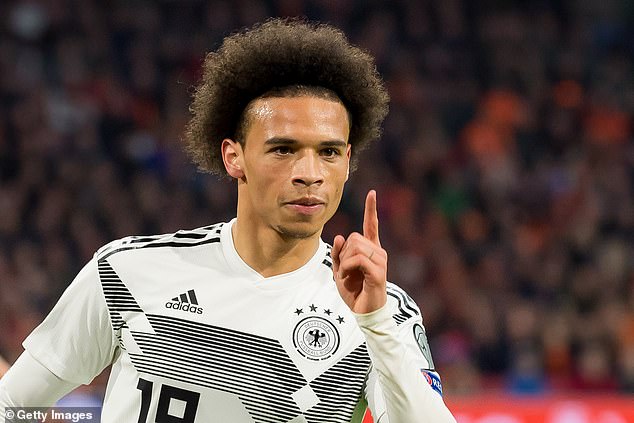 UEFA has said that the four nations, Germany, Spain, Ireland and Italy, which have not committed to fans have until April 19 to provide more information to the governing body

The reluctance of Germany and Italy to commit to fans may help Ireland and Spain cling on to their roles in the competition. If UEFA does not act against those giants, it can hardly insist on Ireland and Spain stepping down either.

If matches have to be reallocated to other countries, England is considered to be a strong contender to take additional games, with the Tottenham Hotspur stadium identified as a potential option to stage them.

UEFA’s statement added: ‘Currently, eight host countries have confirmed stadium capacities based on their projections of an improved health situation in their countries in June and July due to a number of factors, including a country’s vaccination rollout, its planned measures for reopening the economy and the projected slow-down in the virus due to warmer season.’ 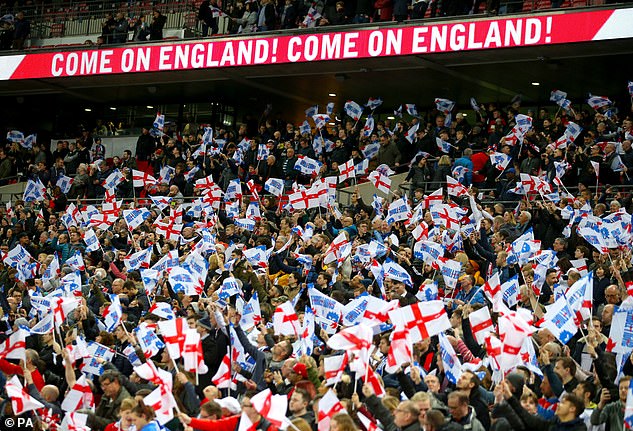 Anyone wishing to return their tickets may do so on the UEFA ticketing portal which is already open and will close at 5pm on Thursday, April 22, in order to receive a full refund.

Special arrangements will be made if a venue has to change or cannot accept fans.

Once the voluntary return of tickets is complete, UEFA will determine if the number of sold tickets that have been retained by ticket holders exceeds the permitted seating capacities of each match.

Should this be the case, a ballot will be held in order to determine the additional tickets that will need to be cancelled in order to comply with the decisions of the host country governments. For tickets purchased through the Participating National Associations sales programme, the rules of the respective fan clubs will apply.

Ticket buyers that have been unsuccessful in the ballot will be informed in May.

The sale of tickets that have been reserved for the teams that qualified through Euro 2020 play-offs – (Hungary, North Macedonia, Scotland, Slovakia – will start in early May.

The unprecedented pandemic has slashed the number of seats available at matches and UEFA is now preparing to refund hundreds of thousands of tickets out of the 2.5m sold to supporters’ clubs and placed on general sale.

One of the most confident of the 12 host cities is St Petersburg, which has committed to 50% capacity at the Gazprom Arena – 32,500 fans – up front. And the local organising committee in Russia has said it may yet increase that number before the final cut-off on April 28.

Similarly, Baku in Azerbaijan, where Wales are due to play, has confirmed a capacity of 50%, with the travelling fans of the participating teams required to present a negative Covid test result to enter Azerbaijan.

Amsterdam, Bucharest, Copenhagen and Glasgow have confirmed a capacity of 25%-33%, with Amsterdam, Bucharest and Copenhagen keeping open the option potentially to raise their capacities at the end of this month, depending on the development of their mass-testing programmes and general health conditions.

England has committed to 25% capacity – 22,500 fans – at Wembley, which will include the first group game at the stadium between England and Croatia on June 13.

This will require a special exemption from government, because the country’s roadmap out of lockdown only allows 10,000 fans until after June 21, at the earliest.

The FA Cup final on May 15 at Wembley is set to be a test event, using Covid passports, and will be played in front of 21,000 spectators.

The FA is planning to ramp up attendances to 45,000 fans for the final and semi final, which would make these games the best-attended matches of the whole tournament.

The figures released by UEFA on Friday, confirm that Scotland has said it will accommodate 25% capacity at Hampden Park in Glasgow – almost 13,000 fans.

It had appeared on Wednesday that Ireland was the only one of 12 host nations to be under threat, with Bilbao committing to 25 per cent capacity at the San Mames stadium in the afternoon.

However, the Spanish FA, the RFEF, later accused the local organising committee in Bilbao of misrepresenting its ability to host matches because the Basque region, in which it resides, will not meet the required level of vaccination. 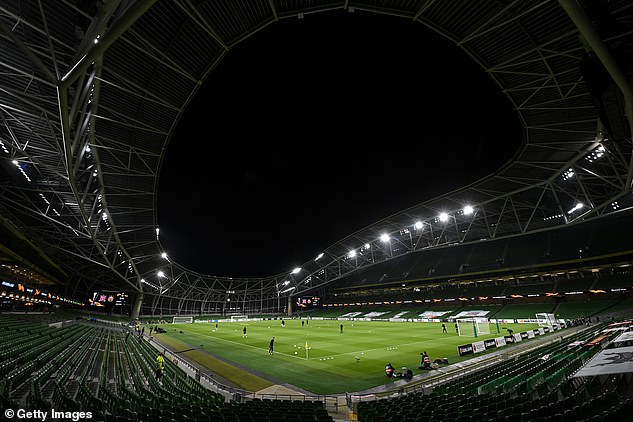 WHAT EACH HOST CITY HAS SAID

Uncertainty now surrounds the Bavarian capital. Local authorities had assured the media it is ‘desirable’ for fans to be in the 70-seat Allianz Arena for the four Euro 2020 matches. However, Germany remains gripped by a third wave of coronavirus infection and it is understood the federal government would not endorse local plans. There are no confirmed plans for fans.

Matches in Baku have been threatened twice. Once by the conflict with Armenia in the Nagorno Karabakh region and then by coronavirus. The former Soviet republic has now committed to 50% attendance at the 69,000-seat Olympic Stadium – almost 35,000 fans. A travel exemption will be applied to the supporters of participating teams, including Wales.

The Hungarian Football Association has been a steadfast supporter of UEFA during the past 12 months and that has not changed now.  The Ferenc Puskás Stadium hosted 15,500 fans for the UEFA Super Cup encounter between Bayern Munich and Sevilla in September and they are going all in for Euro 2020, expecting full capacity of 68,000 fans. A travel exemption will be applied for ticket holders.

Matches will be played in front of a maximum of 13,000 spectators, representing 25% of the National Arena’s capacity. Fans will be required to present a certificate to show they have been vaccinated or recovered from Covid.

Russian authorities have committed to 50% capacity at the 65,000-seat  Gazprom Arena and not ruled out increasing the number of fans before the cut-off date of April 28. Travel exemptions are expected to apply for ticket holders.

Another city ‘at risk’.  Bilbao’s city hall told UEFA it was  ready to stage Euro 2020 games at the San Mames stadium at 25% capacity – 13,000 fans – if coronavirus infection rates drop below current levels, only for the Spanish FA to then claim it would not actually meet UEFA’s requirements. Who knows?

The Royal Netherlands Football Association (KNVB) has said ‘at least 12,000 spectators’ will be able to attend matches at the Johan Cruyff Arena in Amsterdam. And even more supporters could attend if the pandemic eases.

Another city originally on the ‘at risk’ list, which is now back in the game. Hampden Park will have 12,750 fans, 25% capacity, for the four matches it is hosting.

Dublin is ‘at risk’ of losing matches. The Irish government has said it cannot commit to a minimum number of spectators at the Aviva Stadium at this stage because of public health concerns over Covid.

London has committed to 25% capacity at Wembley – 22,500 fans – for the initial games and expressed its desire to increase the numbers as the tournament progresses. The FA has reportedly told UEFA it wants 45,000 spectators in for the final and semi-finals.

Denmark is planning on up to 12,000 fans being allowed into the four matches at the 38,000-capacity Parken Stadium, which would see the ground about one-third full, but it may increase that figure before the end of the month.

Italy has not confirmed a figure for fans attendance at the Stadio Olimpico in Rome – a 72,600-seat stadium. Rome is due to host the opening game of the tournament on June 11, when Italy plays Turkey.