Four heroes of Flight AM2431: Aeromexico crew are praised for heroics in helping save 97 passengers

The four cabin crew members assigned to the Aeromexico Flight AM2431 that crashed Tuesday in Mexico have been commended for their heroism and lauded in a series of tweets for the swift and quick action they took in assisting 97 passengers to safety.

The incident, dubbed the ‘Miracle in Durango’, departed Durango International Airport and was bound  for Mexico City before it crashed in in flames near an airport in northern Mexico, leaving 18 injured, including two critically – flight captain Carlos Galvan Meyran, 38, and a young girl, who suffered first and second degree burns.

A spokesperson with Aeromexico wasn’t able to confirm the status of its flight crew, but commended the way they handled the situation under such extreme conditions.

Durango Governor Jose Rosas Aispuro offered a preliminary report in a Wednesday morning press conference that the tough wind conditions that suddenly caused the airplane, that departed at 3:30 PM local time, to descend and crash on it the side of its left wing before bursting in flames near the landing strip.

Aeromexico flight captain Carlos Galvan Mayran (pictured), 38, was able to steer the plane as it suddenly descended and crashed on its left side Tuesday in northern Mexico. No deaths were reported 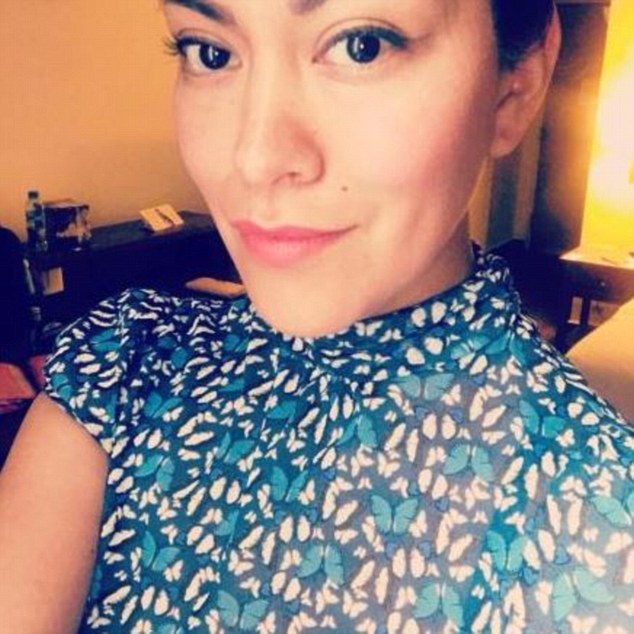 Aeromexico flight attendant Samantha Hernandez (pictured) has been showered with praise for the heroism she and her other crew members demonstrated after Tuesday’s place crash in Mexico. 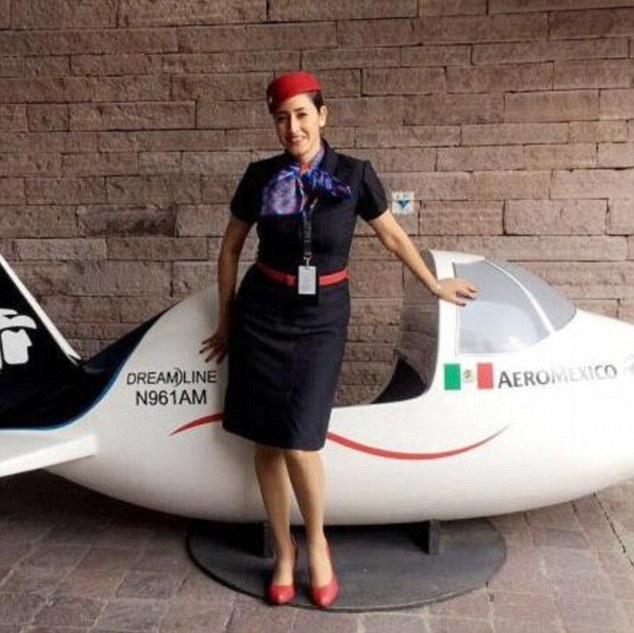 Flight crew member Brenda Zavala (pictured) was lauded along with her fellow flight staff members for the leadership they showed in making sure the 97 passenger were safely led out of the plane after it crashed on Tuesday in Mexico.

The pilot was trying to abort take-off from Durango International Airport due to bad weather but did so too late and crashed in an area of scrubland at the end of the runway, officials said.

Governor Aispuro said Galvan Meyran was in critical but stable condition after being operated due to some cervical injuries that he suffered.

Images showed the E190 aircraft billowing smoke but firefighters quickly brought the blaze under control and survivors were taken to local hospitals. No one has been killed.

One passenger, identified as Jackeline Flores, told reporters she and her daughter escaped from a hole in the fuselage as the aircraft filled up with smoke and flames. 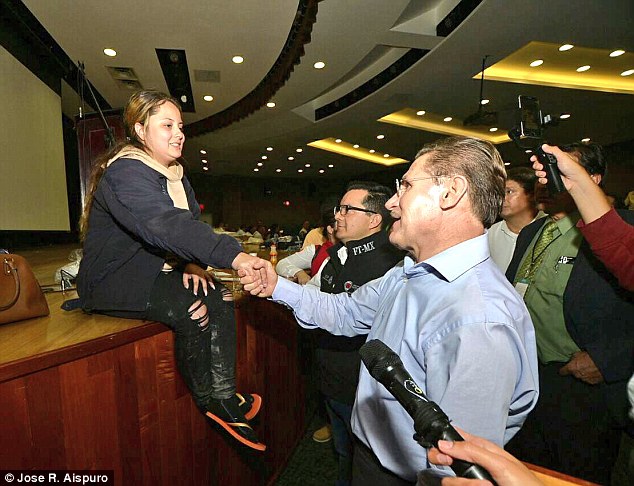 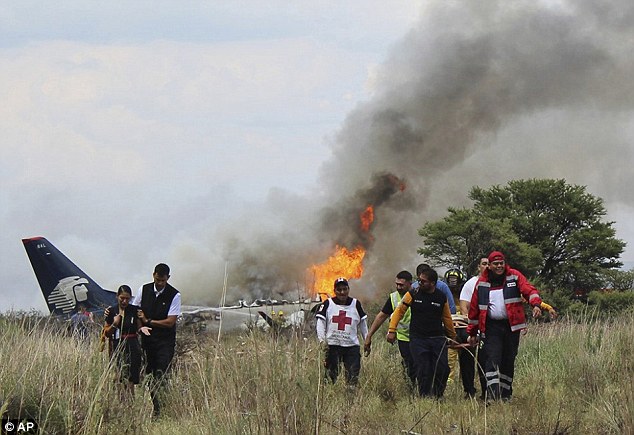 ‘A little girl who left the plane was crying because her legs were burned,’ said Flores, who said she was Mexican but lived in Bogota, Colombia. The plane had barely left the ground in heavy rain when it came down, she said.

Flores said her passport and documents burned in the fire.

‘I feel blessed and grateful to God,’ she said.

‘It was really, really ugly,’ said Lorenzo Nunez, a passenger from Chicago who fled the plane with his two sons and wife. ‘It burned in a question of seconds,’ he told reporters, snapping his fingers for emphasis.

Romulo Campuzano, head of a political party in Durango state who was on the plane, told Foro TV that both wings were on fire as he bolted from the aircraft.

Governor Aispuro Torres wrote on Twitter that there had been ‘no deaths’ from the incident.

‘At this moment on behalf of the cabinet, led by Coordinator Rosario Castro, to attend to the injured and cooperate with airport authorities with what has occurred,’ he said. Governor Aispuro later said a gust of wind hit the plane just as it was lifting off the tarmac, forcing the pilot to abort takeoff.

Passengers said they heard a loud noise as the plane’s left wing banged to the ground, and both engines tore loose. The plane stayed upright, though, and the escape slides activated.

Aispuro said it was too soon to speculate on the cause of the crash. Mechanical failure and human error could be factors, but certainly the weather wasn’t favorable.

‘The most important thing in the seriousness that is an accident of this nature is that there were no deaths — that’s what is most encouraging for us,’ Aispuro said at a news conference.

A spokesman for Durango’s State Coordination of Civil Protection later told Mexican television that two of the people onboard were still in a critical condition, according to ABC. 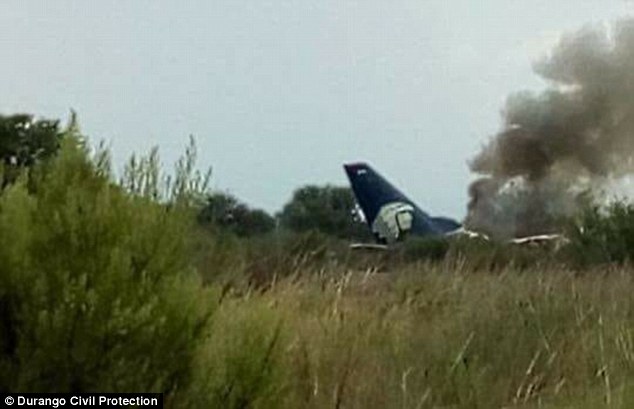 Images showed the E190 aircraft billowing smoke but firefighters quickly brought the blaze under control and survivors were taken to local hospitals. No one has been killed 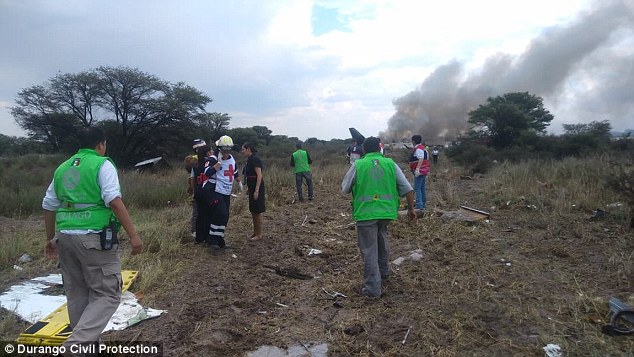 The crashed plane had 97 passengers and 4 crew members on board, according to Mexico’s transport minister. Pictured: Emergency services near the smoking aircraft A reporter for network Milenio said some passengers walked to a highway to seek help. Despite the fire none appeared to have burns, an official said.

The crashed plane had 97 passengers and 4 crew members on board.

Officials and witnesses differed on whether the plane either fell shortly after takeoff or ran off the runway without really gaining altitude. But they agreed the plane was trying to take off during a storm, with some describing marble-sized hail.

The plane had barely taken off when it felt like it was hit by a strong air current, another passenger told network Televisa.

Israel Solano Mejia, director of the Durango city civil defense agency, told Foro TV that the plane ‘made it off the ground, but fell nose-first’ just a few hundred yards from the end of the runway.

‘The nose took the hit. The most seriously injured is the pilot,’ Solano Mejia said. However, he said, ‘the majority of passengers left (the plane) under their own power.’ 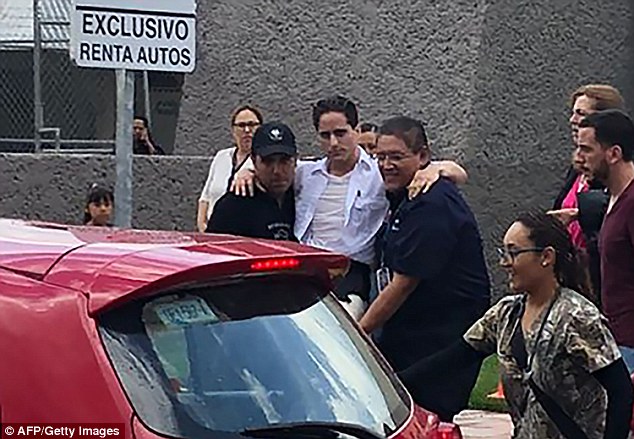 A man is carried by helpers into a vehicle in Durango near to where the plane went down. The cause of the crash is being investigated 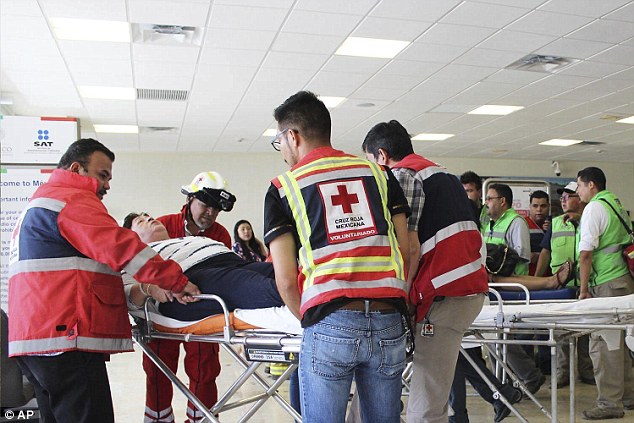 Red Cross workers bring a man injured in the crash into Durango medical center, which was busy taking care of the casualties on Tuesday 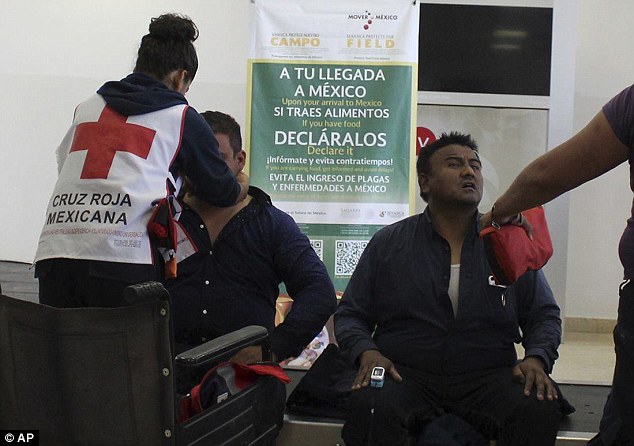 Gerardo Ruiz Eparza, head of Mexico’s Transport Department, said there were 97 passengers and four crew members aboard the Embraer 190. The plane has a capacity of 100 passengers.

The federal Transport Department office said in a press statement that the airplane ‘suffered an accident moments after takeoff,’ but gave no information on the possible cause.

Ruiz Esparza told the Milenio television news channel that ‘it was a big accident, the plane caught fire… there was a very strong storm at the time of takeoff.’

The web site Planespotters.net said the Brazilian-made medium-range Embraer 190 was about 10 years old and had seen service with two other airlines before joining the Aeromexico fleet.

Aeromexico chief executive Andres Conesa described the day as ‘very difficult’ and credited the timely reaction of crew and passengers for the lack of fatalities.

‘Our heart is with those affected and their families,’ he said at an evening news conference.

He said the jetliner was sent for maintenance in February and the crew was well-rested, having started their work day in Durango.

The Brazilian-made medium-range jet was about 10 years old and saw service with two other airlines before joining the Aeromexico fleet.

The E190 is regularly used for regional commercial flights. A weather service said there were scattered storms around Durango on Tuesday.

A U.S. Embassy spokesman said he did not currently have confirmation of whether any American citizens were involved in the accident.